I have been playing around with the recently released #21305 LEGO Ideas Maze set for a few weeks now (thanks LEGO for the early review copy), and I also had a chance to test it out on my brother’s five kids. So I thought to share my review on this really interesting addition to the fan submitted LEGO Ideas line. We will start with the background and official description of the set, then I will share with you my thoughts. 🙂 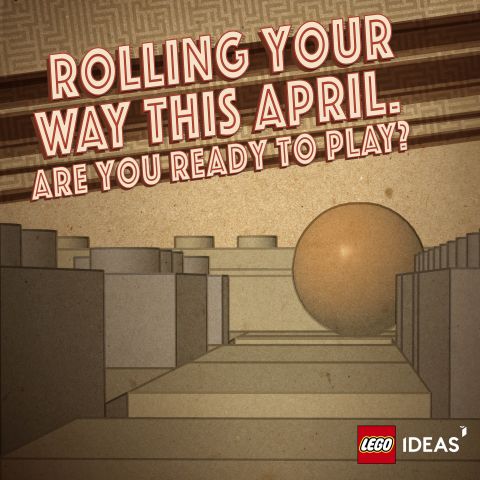 ➡ LEGO IDEAS MAZE HISTORY: The LEGO Ideas Maze was first posted on the LEGO CUUSOO website back in 2012 by Jason Allemann, well known for his amazing mechanical LEGO creations. When LEGO CUUSOO became LEGO Ideas, the project migrated to the new platform and continued to gather support. Later the project was approved by LEGO to be made into an official LEGO set. 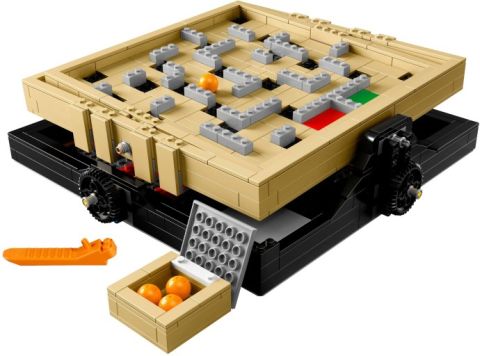 Jason shares in the instruction booklet that comes with the set, that growing up he was always fascinated with how things worked, and although he never actually owned an original wooden maze, he was always drawn to them whenever visiting someone who had one. He originally tried to recreate wooden mazes as faithfully as possible with LEGO bricks, but he later realized it wasn’t practical. In particular, he eliminated the holes where the ball falls through, and instead used depressions. This way the maze could be made smaller, simpler, and with interchangeable surfaces for play. This is actually one of the greatest strength of this set; the maze can be modified to be more or less challenging, or even completely rebuilt for a different play experience. In the video player below Jason himself reviews the set, as well as compares it to his original model, and also talks about some option for modifications. He will also be sharing more maze designs on his website at JKBrickWorks.com.

➡ LEGO IDEAS MAZE OFFICIAL DESCRIPTION: Display your skill and creativity with this 2-in-1 customizable Maze! Build the classical-style maze and make it as challenging as you dare. Turn the wheels on the side to tilt the maze and guide the ball past the traps. Then rebuild it into a medieval-themed maze or create your own unique maze challenges inspired by tips from the set’s LEGO fan designer in the included booklet. A removable ball container and travel lock also mean you can take the Maze wherever you go! 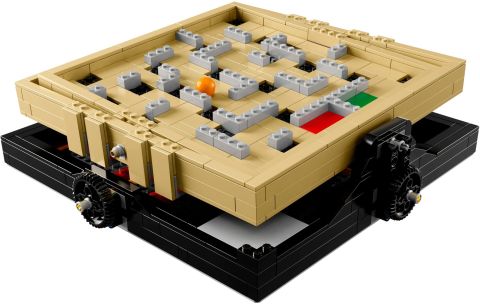 The 2-in-1 Maze features a customizable maze system, wheel-operated tilt mechanism (incorporating LEGO Technic axles and lift arms), built-in removable ball container with 4 orange balls, and a travel lock. Rebuild the classical maze for an alternative medieval-theme maze. The classical-style maze includes green ‘start’ tiles, red ‘finish’ tiles and divider elements. The medieval-style maze includes assorted buildable cottages, a buildable archway and castle, plus divider and tree elements. Turn the wheels to control the tilt and avoid the traps to complete each maze challenge. Customize either maze to make it as simple or challenging as you dare. Attach the ball container under the maze and apply the travel lock for safe transit. Includes a booklet with building instructions for the classical and medieval-style mazes, plus inspirational tips for alternative builds from the fan designer of the maze. This set offers an age-appropriate building and play experience forages 10 and over. Maze measures over 2” (7cm) high, 10” (27cm) wide and 10” (26cm) deep. 769 pieces. Price: $69.99 – BUY HERE

➡ LEGO IDEAS MAZE BOX, PARTS & INSTRUCTIONS: To date, this is the largest LEGO Ideas set, and it comes with a large 32×32 stud baseplate, so the box had to be large too; it is about 15x10x31/2 inches. It does have the same sturdier construction and flip-up lid as all other LEGO Ideas sets. Personally I don’t like the box art. I think it’s too muted and doesn’t highlight how awesome this set actually is. The box also has another fault; you can’t store the built maze inside the box without partially taking it apart. As the LEGO Ideas Maze is more a tabletop game rather than a building-set, it would have greatly benefited from a proper storage box. All it would have needed is a slightly different shape. This is a major miss in my opinion. 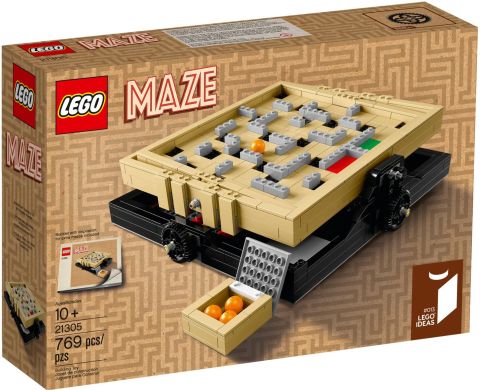 The instruction booklet is also quite large, and it is printed on standard LEGO instructions paper, rather than the higher quality thick paper of other LEGO Ideas sets. This is understandable as the instructions are almost 140 pages and would have been way too large and expensive with thicker paper.

➡ LEGO IDEAS MAZE BUILDING EXPERIENCE: Building the maze was pretty straight forward and took me about an hour and a half. The sides of the base are color coded, which really helps in the building process to make sure you are adding parts to the correct side. Laying the tan tiles for the first maze however is pretty challenging. LEGO knew this and added red lines around the newly added sections in the instructions, but I still made several mistakes. Building the second maze in this regard is a lot easier because it has more texture and details. All in all it was a fun and interesting build.

➡ LEGO IDEAS MAZE DESIGNS: The first maze the instructions walk you though is the basic maze. I actually found it really challenging, and it took me about a week of practice to run the ball through the entire maze. But I haven’t played with mazes like this for a long time. The trick is to keep the ball rolling slowly and to rest it at the corners created by the light-gray walls. I found the second maze much easier, but that’s probably because I have been already practicing with the first one for several days. You can definitely make the maze easier by repositioning pieces and plugging some of the traps. But I was stubborn and wanted to perfect my maze running techniques without changing anything. 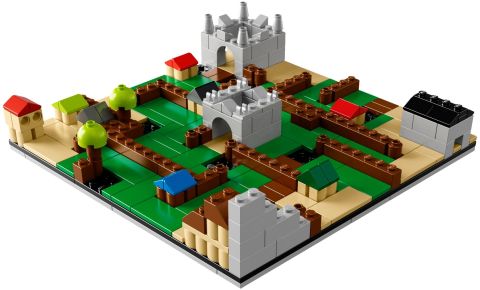 ➡ LEGO IDEAS MAZE OTHER DESIGNS: The official description only focus on the first two mazes that got step-by-step instructions, but the booklet actually includes three other mazes you can build with the same parts. The pictures on these are very clear from two different angles, so you should have absolutely no problem building them just by looking at the pictures, even though there are no step-by-step instructions. There should be also more maze designs added to the LEGO Ideas website, and of course you can also design your own. 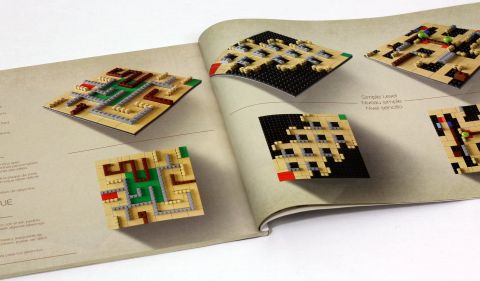 ➡ LEGO IDEAS MAZE MECHANISM: You control the maze by two knobs on two sides, which tilts the maze in four directions. Interestingly, the tilt is deeper on two sides. I didn’t find this to be a big deal and interfere with play, but I thought it was interesting. I found the action of the knobs smooth and responsive. However my brother’s kids didn’t use them. They tilted the frames themselves to move the ball around. However only one of them was old enough to fall in the recommended age group of 10+. They really enjoyed playing though, especially modifying the maze and giving themselves new challenges. 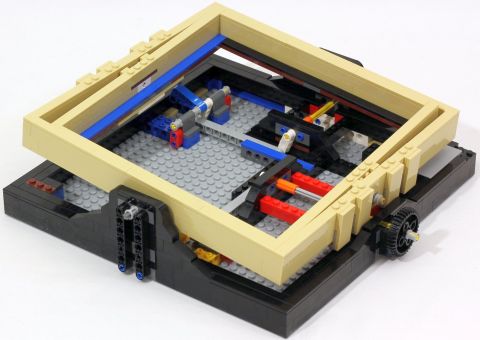 ➡ LEGO IDEAS MAZE PROS: Maze and LEGO is a good combination, and this set is fun! The fact that you can rebuild the maze is a huge plus over traditional wooden mazes. The set looks great, and if you place it on a coffee-table, I’m sure people visiting your home won’t be able to resist playing around with it. The controls work well, the set is sturdy and it is easy to carry it around. It is also easy to do basic customization to make the maze simpler or more difficult even by those who are not that familiar with LEGO. Just add a few extra brick here and there. I really have nothing negative to say about the design of the set.

➡ LEGO IDEA MAZE CONS: While the set provides an excellent play experience, it does have some negative aspects. First thing is the box, which I already mentioned. I can’t believe LEGO spent all that money to make a big and sturdy box, and you can’t put the finished maze inside. I mean, come on! Now I have this big box I don’t want to throw away because it’s nice, but I can’t put the maze inside without partially taking it apart. Second negative is the ball itself. It is a regular LEGO soccer ball, which has a mould-dent on one side. This makes the ball get stuck on the dent fairly frequently, and jiggling it out of that position is pretty challenging without falling into a trap. You might want to replace the ball with a standard marble. Also, because it takes a while to pop off all the tiles when you want to completely rebuild the maze, it is a good idea to keep a couple of built bases around so it is easier to switch them out. Too bad LEGO no longer makes 24×24 baseplates. They would be perfect for this! 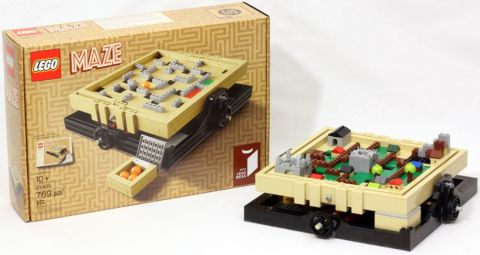 All in all I really like the LEGO Ideas Maze. The play-experience is great, and the customizability takes traditional wooden mazes to a whole new level. There is so much to do with this set! My brother’s kids played around with it the entire time they were visiting, and they came up with so many ways to play. And I have been playing with it for several weeks also. It’s sad that LEGO didn’t make the box-art more interesting. I know this is already making some people overlook this set for more exciting looking ones, but I definitely recommend it. It provides a lot of fun for both kids and adults. You can find it under the LEGO Ideas section of the Online LEGO Shop.

So what do you think? How do you like the LEGO Ideas Maze? Do you have it already? Or are you planning to pick it up? What other mazes would you build? Feel free to share your thoughts in the comment section below! 😉