A few days ago the fifth wave of LEGO Dimensions Packs became available. It includes three LEGO Dimensions Fun Packs. This is the last wave that we know about, but according to the press-release (posted below), we should be hearing about upcoming waves soon. Another interesting piece of news is that Disney Infinity going to be discontinued (see announcement here). This means that Star Wars and other Disney licenses previously with Disney Infinity could likely be added to LEGO Dimensions. We shall see… 🙂 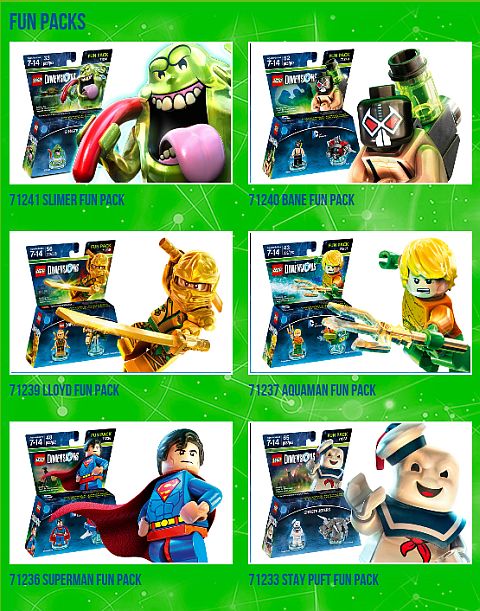 Warner Bros. Interactive Entertainment announced the release of the highly collectable DC Comics Bane, Ghostbusters Slimer and LEGO Ninjago Lloyd Fun Packs. Players can customize their building and gaming adventures in LEGO Dimensions with the purchase of these Wave 5 Fun Packs which provide buildable characters, and rebuildable 3-in-1 vehicles and gadgets with special in-game abilities. All expansion packs provide gamers the opportunity to use everything interchangeably, anywhere throughout the game. Plus, any expansion pack character can unlock the corresponding Adventure World of the same brand to provide players with additional open-world gameplay content based on that entertainment property. 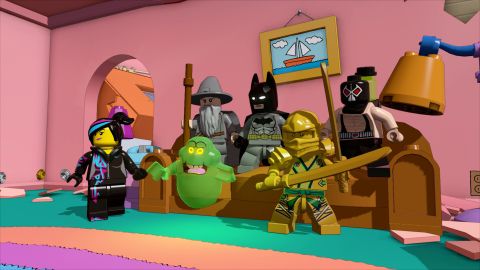 DC Comics fans can broaden their LEGO Dimensions gameplay with the buildable Bane Fun Pack. Players can place the buildable villain on the LEGO Toy Pad to bring him to life in the game, and then activate his Hazard Protection, Big Transform, or Super Stealth abilities to solve puzzles and overpower enemies. His 3-in-1 Drill Driver will boost gameplay, and can be rebuilt into the Bane Dig ‘n Drill and the Bane Drill ‘n Blast for upgraded in-game abilities. 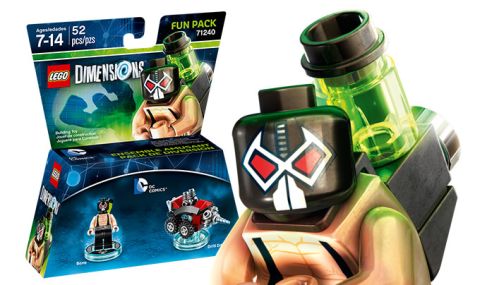 Players who want to slime their enemies can construct Slimer, the glutinous ghost, included in the Ghostbusters Slimer Fun Pack. They can fire his Hot Dog and activate his Boomerang, Sonar Smash, Flying, Dive, Hazard Clean, Illumination, Mini Access and Hazard Protection abilities to solve puzzles and battle enemies. When he needs backup, players can call in the Slime Shooter and rebuild it into a Slime Exploder and Slime Streamer for upgraded powers in the game. 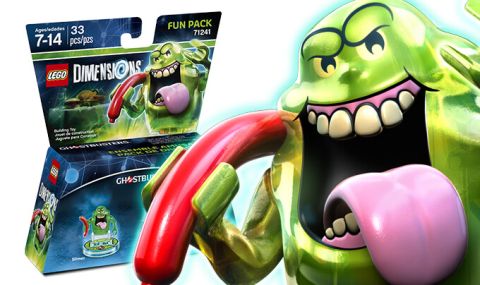 Players can put their ninja skills to the test with the LEGO Ninjago Lloyd Fun Pack, featuring a buildable Lloyd minifigure, two Golden Katanas and rebuildable 3-in-1 Golden Dragon. Players can use Lloyd’s two Golden Katanas and activate his special Spinjitzu, Illumination, Acrobat, Laser Deflector and Stealth abilities to solve puzzles and take on enemies in true Ninja style! When it’s time to take the battle to the sky, launch Lloyd’s Golden Dragon and rebuild it into a Sword Projector Dragon and Mega Flight Dragon for enhanced powers. 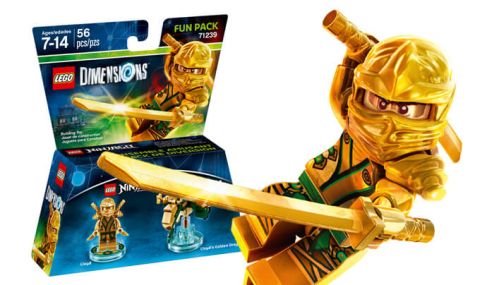 These Fun Packs round out the first five waves of LEGO Dimensions expansion packs, with many new expansion packs based on more of the world’s biggest entertainment brands to be revealed soon. The LEGO Dimensions Starter Pack will remain the entry point for a gaming system of play that will offer continued compatibility – everything bought today and expansions added tomorrow will continue to work together. No compatibility chart necessary!

LEGO Dimensions is available for PlayStation4 and PlayStation3 computer entertainment systems, Xbox One, Xbox 360, and the Wii U system from Nintendo. 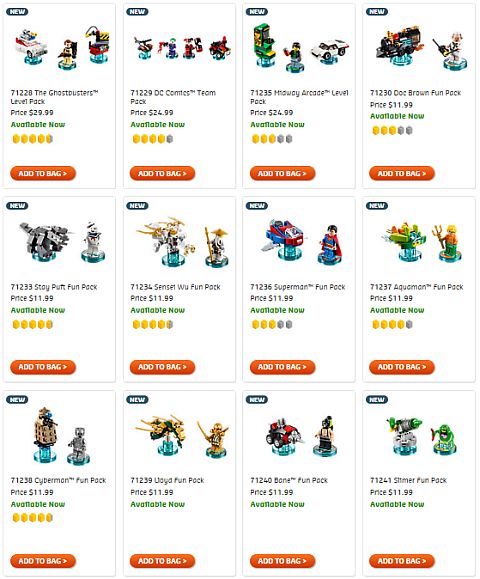 Also, Amazon has a very helpful dedicated page just for LEGO Dimensions, where you can find all versions of the Starter Pack for different gaming systems, and all the Level Packs, Team Packs and Fun Packs (add-on packs work with all systems). Amazon has many of the packs on sale, so you usually get a better deal, plus you can combine your purchase with non-LEGO items: LEGO DIMENSIONS ON AMAZON

So what do you think? How do you like the new LEGO Dimensions Packs? Are you planning to pick up any of them? Do you play the game, or do you only collect the unique minifigs and accessories? Feel free to share your thoughts and discuss in the comment section below! 😉

Next post: More info on the LEGO Freemaker Adventures