There is a new contest on ReBrick, this time focusing on LEGO Ninjago. As you may remember from our previous discussions (see links at the end of this post), LEGO’s ReBrick website was recently re-launched to focus on LEGO contests for teen and adult LEGO fans, and there has been several interesting contests with great prizes already. 🙂 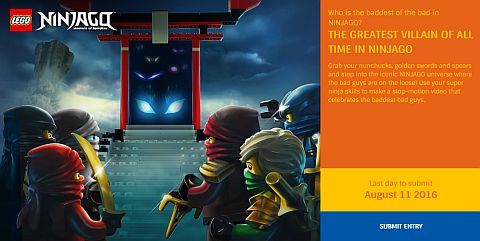 ➡ LEGO NINJAGO CONTEST – DESCRIPTION: Have you ever wanted to immerse yourself in a fun, action-packed ninja universe? Now is your chance to dive into the adventurous Ninjago world and explore the greatest villains. We invite you to make a maximum one minute stop-motion video with the theme “The greatest villain of all time in Ninjago”. Create a story around existing Ninjago badguys or build your own super villain(s). We encourage you to be creative and original and show your twist on the Ninjago universe. You can find some inspiration in the video below.

➡ LEGO NINJAGO CONTEST – GETTING STARTED: To help you enter the contest, there are a few notes on the ReBrick website to help you get an overall understanding of the Ninjago universe, and help set the stage for the Ninjago look and feel for your video. I copied them here for your convenience. Action that characterizes Ninjago: lots of ninja weapons but no guns, fighting scenes and close-up fighting sequences, Spinjitzu animations, many different bad guys including snakes, skeletons and ghosts. Builds that characterize Ninjago: Asian inspired buildings and ornamentation with ninja weapons built in, gold elements, bonsai trees, dragons, Asian inspired cars, motorcycles and other cool vehicles. Atmosphere that characterizes Ninjago: elemental powers, fantasy, humor, ninja moments, ninja action.

➡ LEGO NINJAGO CONTEST – HOW TO ENTER: 1. Create your video. 2. Upload your video to a video hosting site of your choice and copy the URL to your video in the URL field on the entry page on LEGO ReBrick. 3. Take up to five screenshots from your video and upload them on the entry page on LEGO ReBrick. 4. Use the description field to tell a bit about your video, then hit submit. 5. When you receive a “Success!” pop-up notification after clicking “submit”, your entry has successfully been submitted. 6. The ReBrick moderation team will review your entry within 1-3 working days to make sure it fits all the contest rules. Share your entry directly from LEGO ReBrick to your social media channels with #LEGONINJAGOgreatestvillain hastag (this is not a requirement for entry).

➡ LEGO NINJAGO CONTEST – ENTRY DEADLINE: You need to submit your entry at ReBrick.com no later than August 11th 2016 at 10:00 AM CET, so make sure to mark your calendar. 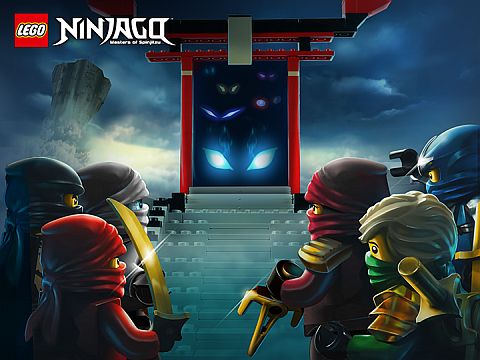 ➡ LEGO NINJAGO CONTEST – RULES: Your video can be minimum 15 seconds and maximum 1 minute. You are encouraged to add original sound effects/audio however, adding sound in any form is not a requirement. Entries with audio that has third party intellectual property rights are not eligible for the contest – use audio that doesn’t have intellectual property rights or is under creative commons license in your video. Your video must be stop-motion, although animations within a stop-motion video are allowed. If you wish to use characters/themes outside of Ninjago, only use LEGO-created IPs, such as LEGO Friends, LEGO City, etc. Keep in mind however that Ninjago action and humor and overall Ninjago look and feel is part of the judging criteria. Ninjago action and fighting scenes are allowed, but entries with extreme violence with blood will not be eligible for the contest. You can submit multiple entries to the contest. Each entry must have been made by the user submitting it. Entries cannot contain copies of any existing third party work or creation. Entrants must be at least 13 years of age at the time of entry. Please see all general contest terms and conditions here.

➡ LEGO NINJAGO CONTEST – PRIZES: There will be one grand prize winner, who will receive a trip for two to LEGOLAND, including transportation (economy class), 2 nights stay at Hotel LEGOLAND in Billund in a Ninjago room, exclusive tour of the new Ninjago world in LEGOLAND Billund opening summer 2016, meeting one of the Ninjago designers, and the chance to enjoy the new Ninjago Dark Ride and miniland. The prize is for Thursday October 13th 2016 – Saturday October 15th 2016. The winner must be able to travel to Billund for the prize on October 13th. The final schedule for the exclusive tour of Ninjago World in LEGOLAND Billund and for the visit to the LEGO Innovation House will be sent to the winner once the winner has accepted the prize. There will also be 6 runner-up winners. They will receive one #70751 LEGO Ninjago Temple of Airjitzu set signed by the designer. From these 6 semi-finalists, one grand prize winner will be selected. 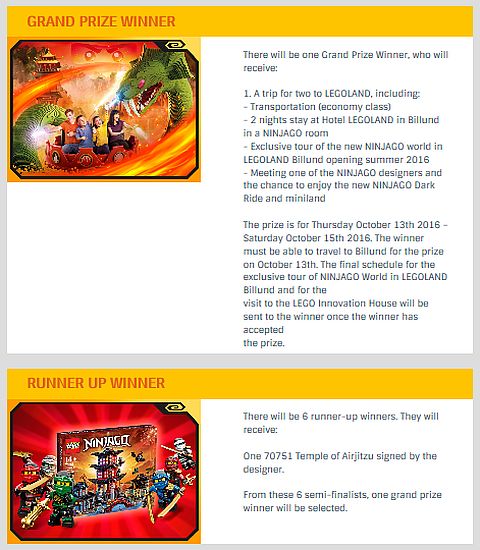 This is yet another great contest by the LEGO ReBrick website with a fun challenge and awesome prices. I know we have a lot of readers who are LEGO Ninjago fans, so I hope that some of you will get inspired to enter. If you would like to get some inspiration, or want to refresh your memory on the LEGO Ninjago stories, check the LEGO Ninjago section, or you can also browse the currently available LEGO Ninjago sets at the Online LEGO Shop. 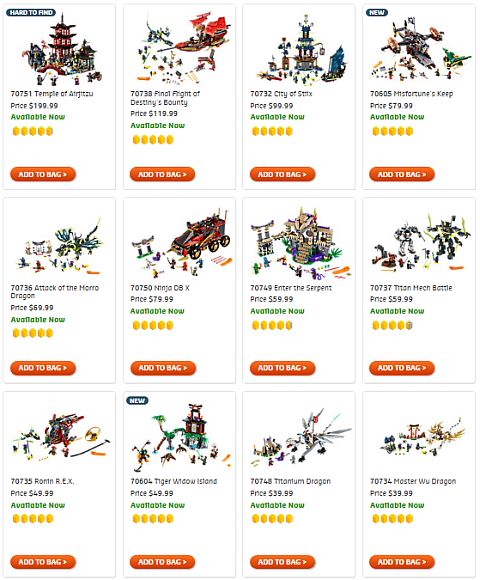 So what do you think? How do you like this LEGO contest? Are you planning to enter? Do you already have some ideas on what your story is going to be? Feel free to share and discuss in the comment section below! 😉