Some of the recently released sets we haven’t discussed yet are Series 9 of LEGO Mixels. LEGO Mixels have been popular both with collectors who like the cute little brick-built characters, and those who are looking for small interesting parts for their own creations. The new ball-joint pieces that are available in all of the LEGO Mixels sets have been particularly useful. Sadly, LEGO Mixels is going to get retired after this series, so this is your last chance to collect them… 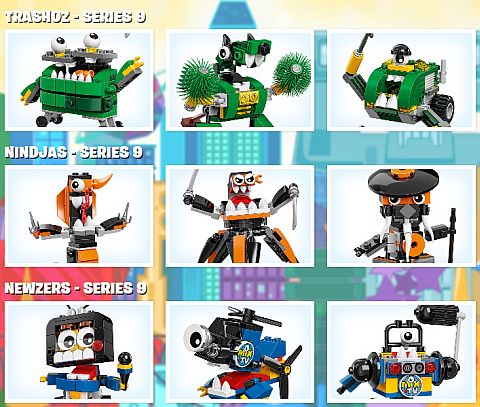 Just like with the previous series, LEGO Mixels Series 9 includes three tribes, with three characters in each. This time we get the green Trashoz that take care of the garbage, the orange Nindjas with ninja weapons and powers, and the Newzers who cover the news from around Mixopolis.

➡ LEGO MIXELS SERIES 9 TRASHOS: The “Garbage Mixels” (as LEGO refers to them on the LEGO Mixels website) include #41572 LEGO Mixels Gobbol, #41573 LEGO Mixels Sweepz, and #41574 LEGO Mixels Compax. These are actually my favorites from this series. Each character has so much personality, and so many great parts. Plus this is the first time we get a green Mixels series without a lot of the lighter lime color mixed in. In the video-review below you can check them out in more detail.

➡ LEGO MIXELS SERIES 9 NINDJAS: This tribe includes #41575 LEGO Mixels Cobrax, #41576 LEGO Mixels Spinza, and #41577 LEGO Mixels Mysto. This last character in particular looks excellent as a display figure. Just like in all LEGO Mixels series, the three characters in each tribe can be combined into a larger LEGO Mixels Max,  and there are also other combinations you can download from the LEGO Mixels website.

➡ LEGO MIXELS SERIES 9 NEWZERS: The news crew include #41578 LEGO Mixels Screeno, #41579 LEGO Mixels Camsta, and #41580 LEGO Mixels Myke. All three are very creative characters, and round 2×2 printed tile is a nice addition. In the video-player below, you can check out all the characters in more detail.

LEGO Mixels have been an excellent theme from the very first series back in 2014. While the characters are all about the same size and style, LEGO designers managed to keep them different enough to keep collectors interested. Each pack is only $5, so it’s an easy way to pick up a handful of useful parts, learn some interesting building techniques, and end up with a cute character. You can find Series 9, along with some of the previous characters under the LEGO Mixels section of the Online LEGO Shop. 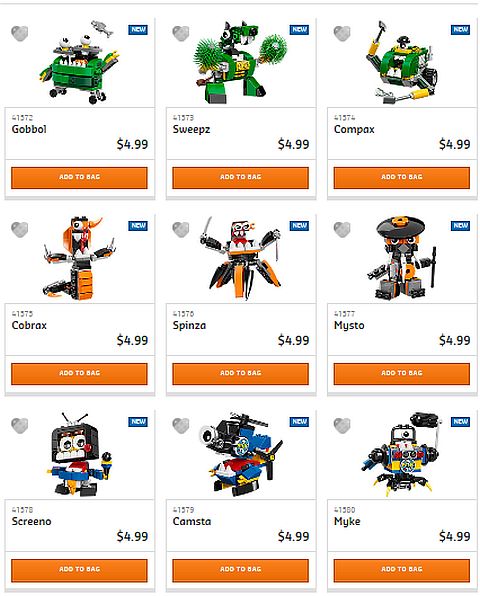 What do you think? Have you been collecting the LEGO Mixels characters? And how do you like Series 9? Are you planning to get them? How do you feel about LEGO Mixels being discontinued? Feel free to share your thoughts and discuss in the comment section below! 😉