It was just about a week ago when we talked about the LEGO Star Wars Freighter Wars Contest, where you can enter for a chance to win the new #75192 LEGO Star Wars Ultimate Collector’s Series Millennium Falcon. Since then, LEGO added another exciting contest to their ReBrick website, this time for Batman fans. Details are below. 🙂 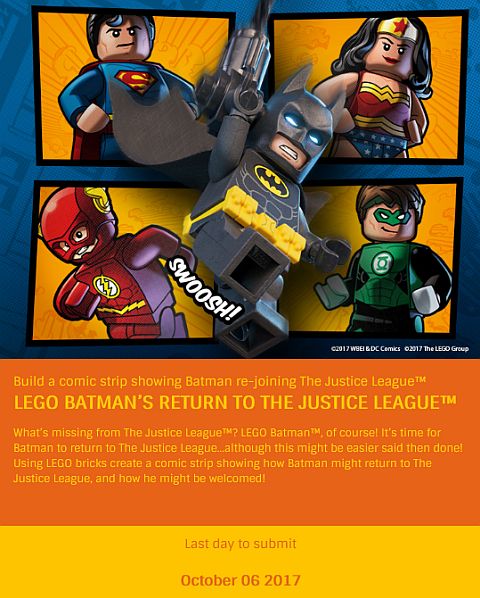 ➡ LEGO BATMAN’S RETURN CONTEST – HOW TO ENTER: Build out scenes/panels from your comic, creating up to five scenes/panels, you can use photo editing or other means to create text boxes and speak bubbles, although having these are not a requirement. Use photo editing to combine them all as one picture, or upload them as five separate pictures and submit them to the contest. Use the description field to describe your model – then hit “submit”. When you receive a “Success!” pop-up notification after clicking “submit” on the entry submission page, your entry has successfully been submitted. The ReBrick moderation team will review it within 1-3 working days to make sure it fits all the contest rules.

➡ LEGO BATMAN’S RETURN CONTEST – RULES: Builds can honor any iteration of Batman including TV series, movies, comics or original creations but otherwise should not relate to or include any third party IPs. This means all entries containing third party IPs that do not relate to LEGO Batman or DC Comics, including licensed characters from Marvel Super Heroes, Star Wars, etc. will not be eligible for the contest. Please do not use elements or minifigure parts specific to another IP. Use of any LEGO DC characters is allowed. Your entry must tell a story. Your entry can only be five scenes/panels long, although it can be as short as one scene/panel. You can use photo editing to combine your entry’s photos into one or more scene/panel, or upload each scene/panel as a separate image. Action is accepted, but entries with extreme violence and blood will not be eligible for the contest. Text boxes, speech bubbles, and other effects are not necessary, however you can use photo editing to add text boxes or speech bubbles, built text using bricks, or use paper/common household objects to create text boxes/speech bubbles (please do not write or draw on bricks). Use of LEGO Digital Designer to create your entry is allowed, along with photo editing software or adding effects to your entry. Entries must not contain LEGO elements which have been modified from their original form, including painted or cut elements, however the use of homemade stickers is allowed in the contest. Entrants must be at least 13 years of age at the time of entry. You can read the rest of the entry guidelines and rules here.

➡ LEGO BATMAN’S RETURN CONTEST – DEADLINE: You must submit your entry by October 6th, 2017 at 10:00 AM EST. If you are not sure what time zone you are in, you can use an online time-zone converter to make sure you don’t miss the deadline.

➡ LEGO BATMAN’S RETURN CONTEST – JUDGES: A panel of judges from The LEGO Batman Movie team will select one grand prize winner and two runner up winners. They will judge entries upon: overall coolness and originality – 25%, most inspired details – 25%, relevance to the LEGO Batman universe – 25%, LEGO Batman humor and style – 25%. 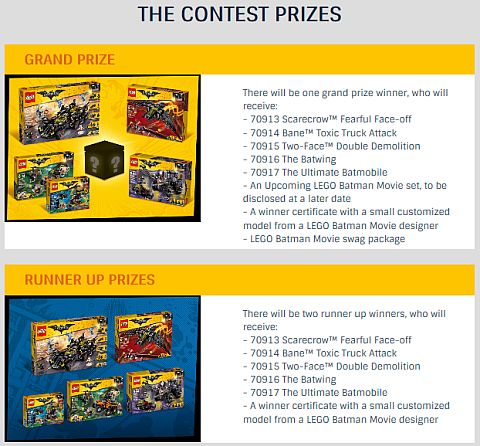 ➡ LEGO BATMAN CONTEST – ANNOUNCING WINNERS: Winners will be contacted on the email address associated with their LEGO ID account after October 25th, 2017 and announced on ReBrick when the winners returned the signed Winner’s Certification Documents. A winner who does not return their Winner’s Certification Document within one week (5 days) of receiving it will be disqualified, and a new winner will be selected. 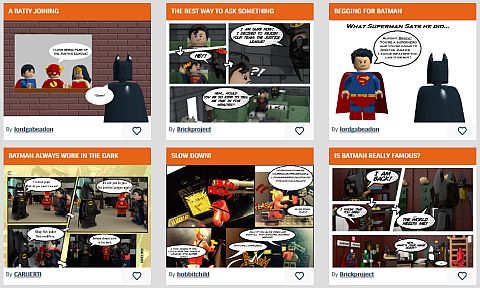 This contest is different than a normal building contest as it also includes photography and photo editing skills, and would be a fun challenge for creative LEGO and Batman fans. There are already a number of entries to this competition, which you can see at the official contest page. And for some inspiration, you can also browse through The LEGO Batman Movie sets at the Online LEGO Shop.

What do you think? How do you like the LEGO Batman’s Return to the Justice League contest? Are you planning to enter? Do you have some ideas already? Feel free to share and discuss in the comment section below! 😉