by Thita (admin) on September 27, 2017
in Featured LEGO Creations

Canada has been celebrating the 150th anniversary of the country’s confederation with a number of festive and commemorative events throughout the year. Canadian LEGO fans are also joining in the fun by building many Canadian themed models, which you can find at the Canada Builds 150 website. Today, I thought to share with you two Canada-themed models by Jason Allemann and his partner Kristal – well known for their cute and clever motorized LEGO creatures and other mechanical creations. 🙂 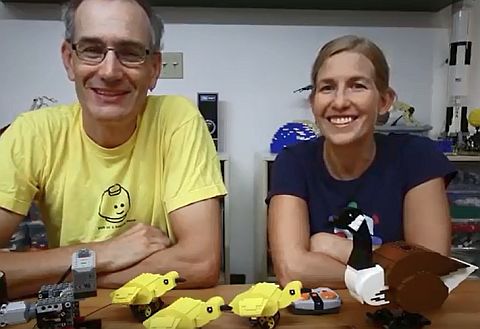 Jason shares the following on his website: “I thought it would be an interesting challenge to build a mechanical LEGO sculpture of Canada’s national animal, the cute and industrious beaver.” As you will see in the video below, the beaver uses a fairly simple mechanism, consisting of a single drive shaft with a cam that slaps the tail and a crank connected to a piston that opens and closes the teeth. You can operate the beaver with a hand crank inserted into the side of the body, or by using a LEGO Power Functions M-Motor. Building instructions and more details about the LEGO mechanical beaver are available at Jason’t website, JKBrickWorks.com.

To continue the celebration of Canada’s 150th, Kristal decided to build the quintessential scourge of Canadian’s everywhere, the dreaded eating-everything, pooping-everywhere, and attacking-everyone Canada goose and three goslings. The whole setup is similar to a traditional pull toy, with the three goslings tied to momma goose, so they can get pulled along. Jason added a LEGO Power Functions Battery Box, M-Motor and IR Receiver to the goose, so that it can be controlled via an IR Remote. For the goslings there is a crank on either end of the axle of the drive wheels, connected to the wings via a rod. This acts as a piston to flap the wings up and down as the goslings are pulled along a surface. More explanation and details can be found in the video below.

Really cute models, aren’t they? And very clever too! Jason shares on his website that they may be making some more Canada-themed LEGO projects this year, so keep an eye out for them. What do you think? How do you like these motorized LEGO animals? Feel free to share your thoughts in the comment section below! 😉