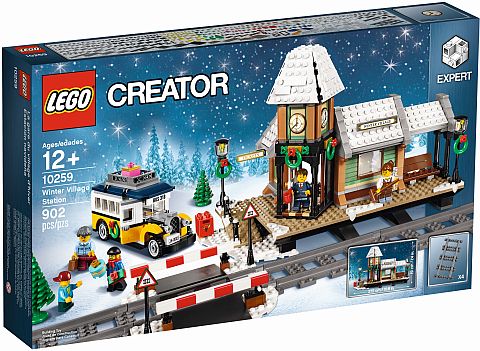 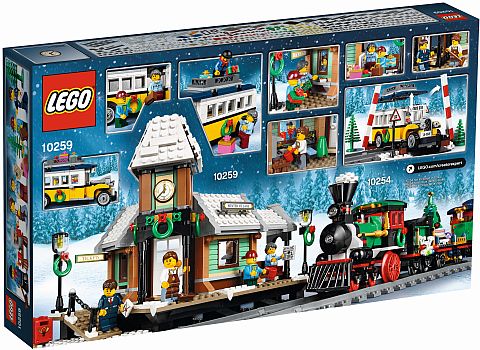 I purchased the #10259 LEGO Creator Winter Village Station at the beginning of the month (along with the #21312 LEGO Ideas Women of NASA that I reviewed already), and finally had the time to build it last night. To be honest, I also bought it because of the bus, and because I already had the #10254 LEGO Creator Winter Holiday Train from last year. Plus, the whole set has nice colors, and the four straight tracks are very useful (I’m always short on those). I didn’t pay much attention to the train station itself. However, after building the set, I have much more appreciation for the entire design, especially the train station. So, let’s take a closer look. 🙂 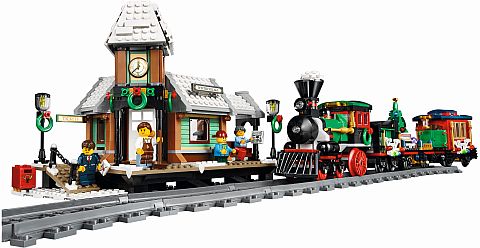 The #10259 LEGO Creator Winter Village Station comes with two instructions booklets; a bigger one and a smaller one. The smaller one is 46 pages, and includes instructions for the bus and the train crossing. The bigger one is 63 pages, and includes instructions for the train station itself. This is a super thoughtful arrangement, as it allows more than one person to build the set together at the same time. So, for example, one child could work on the bus, while another child (or parent) could start building the train station. (By the way, the set is recommended for ages 12+, but I would say that an 6+ would also be happy with the building experience.) 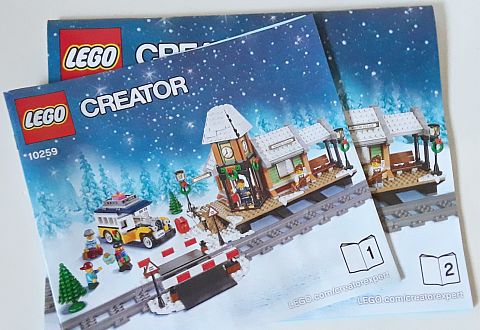 The smaller instruction booklet starts with building the train crossing, which is simple, but looks nice, and serves its intended purpose. As a side-note, I always find it funny that instructions for train sets suggest throwing away the pegs that holds together the train-tracks inside the packaging. I love those pegs! They are the same size as a regular LEGO rod, but shorter, and have all kinds of useful applications.

The bus is six studs wide and eighteen studs long. While this allows only one row of seats for passengers, I like this size better than the wider LEGO City vehicles. Even though it’s not a realistic scale if you consider minifigs as people, narrow vehicles do fit better on LEGO City streets, and look more to-scale with the buildings. I already added the bus to my LEGO Modular Buildings street. 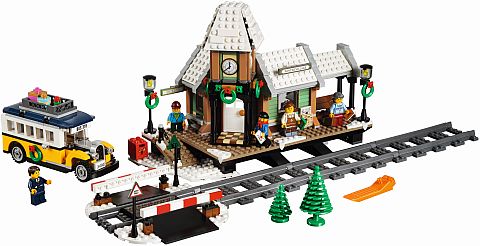 The building process for the bus is very straight forward, with no unusual building techniques. Though, there is one subtle but nice technique that caught my attention. The clips at the edge of the roof look like attachment points for the roof rack, but they actually don’t serve any functional purpose. They are just there to hide the gap between the roof panels. Nice design choice! 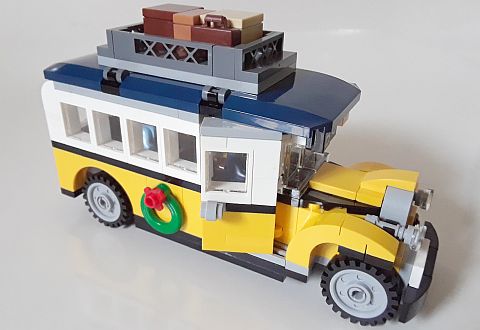 I like this little bus as is. The only things I changed on it was elevating the steering wheel a bit, and swapping the hood cover and hood ornament from light gray to yellow (one 2×2 tile, one 1×2 jumper-plate, and one 1×2 curved slope). I just prefer it that way. I should mention that this is the second really nice six-stud wide bus that LEGO released this year. The other one, a school bus, comes in the #41134 LEGO Friends Heartlake Performance School (see below). 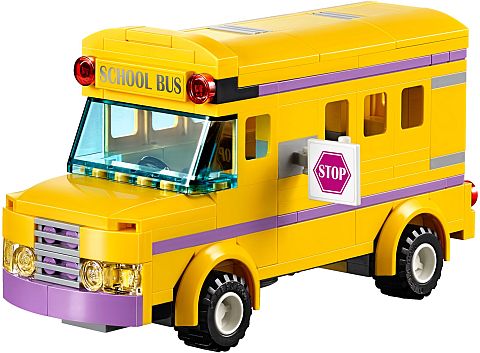 The second instruction booklet includes steps for building the train station itself. First, you build the train platform, which serves the purpose of elevating the station to the level of the train, and also hides the construction of one of the nicest features of the station, the checkered floor at the entryway. While the floor may not look like anything special on the finished model, because it is built at an angle, quite a bit of engineering had to go into the construction. 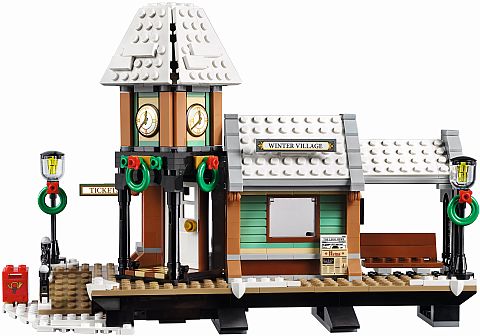 In fact, even though the station is small, it is full of building techniques we normally see at much larger advanced models, like the LEGO Modular Buildings. The offset sand-green walls on jumper-plates, the use of those black cylinders as columns (normally used as pistons or weapons), and the construction of the entire front entrance. In fact, I could write a whole separate article just on that entrance! Starting from below the floor with the hidden turntable to position the checkered pattern, the angling of the door, the whole second floor construction to accommodate the three clock faces in the tower, all the way to the roof are a design marvel! This set actually gives you a really authentic glimpse of what it is like to build the LEGO Modular Buildings, but in a much smaller scale. 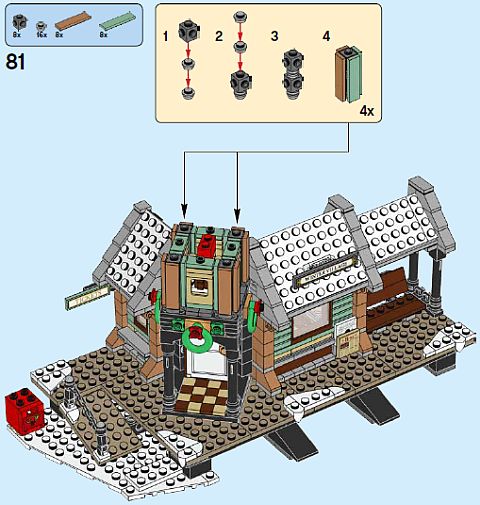 Unlike the LEGO Modular Buildings, however, the back of the train station is open to allow play. This is a nice arrangement, and is in line with the other LEGO Creator Winter Village sets. It makes the sets very play-friendly, as minifigs can be taken in and out easily. 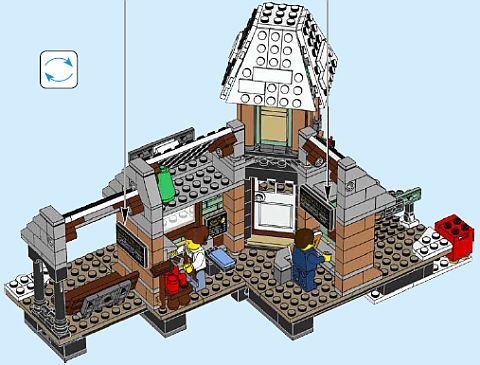 Speaking of minifigs, there are five of them included with the #10259 LEGO Creator Winter Village Station. There is a bus driver, barista, grandmother, child and a ticket agent. All five of them come with very useful prints that can be used in other applications.

Here is the official description of the set, as well as the video review by JANGBRiCKS, so you can get another perspective: Head for home with the festive Winter Village Station holiday set, featuring a snowy railroad station with wreath adorned lampposts and clock tower, platform, mailbox, green trees, snowy grade crossing with twin barriers and lights, and a beautiful, festively decorated bus with opening doors and a luggage rack with removable luggage and gift wrapped packages. This LEGO Creator Expert model also includes a ticket counter with a timetable and a transaction counter window with room for sliding out tickets to travelers, plus a coffee shop with a serving hatch and a detailed interior with an espresso machine, cups, cash register and a menu. Includes 5 minifigures: a bus driver, barista, grandmother, child and a ticket agent. Winter Village Station measures over 7” (19cm) high, 11” (28cm) wide and 5” (14cm) deep. Grade Crossing when closed measures over 2” (6cm) high, 5” (13cm) wide and 5” (14cm) deep. Bus measures over 3” (9cm) high, 5” (15cm) long and 2” (7cm) wide. 902 pieces. Price: $79.99 – BUY HERE

As far as interesting parts, there are quite a few. Some that stand out are three black round plates with hollow studs and bar on the side, a couple of black bar holders with handle, the three printer clock faces (they are printed on the new type of rounded shield!), the two large black 6×8 slopes for the train crossing, 1×1 round quarter tiles in white and black, the center roof piece in dark-blue is exclusive to this set and the end roof pieces are still rare in dark-blue, the microphone in light-bluish-gray is exclusive to this set (you get three of them), all the nice nougat and sand-green pieces, and 3×3 plates in white and dark-bluish-gray. 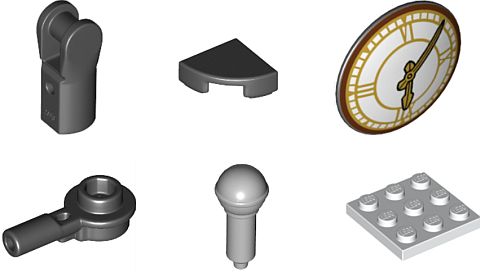 All in all, I would say that this set is much better than I expected. The bus is an obvious favorite, but the building itself turned out to be really excellent. The building techniques and part-selection are phenomenal, and the end result is aesthetically pleasing. Even the placement of the patches of snow is lovely and artistic! The set carries the magic of the LEGO Creator Winter Village collection, and is a worthy addition to the series. If you don’t have it already, I highly recommend it either as an addition to the LEGO Winter Village layout, or as a generic train station to your LEGO City. You can find it under the LEGO Creator section of the Online LEGO Shop.

Next post: LEGO Ideas Build Your Own Logo Contest