Another feature LEGO has been adding to the LEGO City Police sets is quite a bit of humor. There are always some funny ways the badguys end up getting themselves in even more trouble than they anticipated. This year, they are hiding out in the mountains, which means they also have to keep an eye on wildlife like bees, bears, skunks, and mountain lions.

The 2018 LEGO City Mountain Police collection includes seven sets; three small ones in the $7-$20 range, three medium ones in the $40-$60, and one large set still under $100. And even the smallest sets include both cops and robbers, fun play-features, and new and interesting pieces. 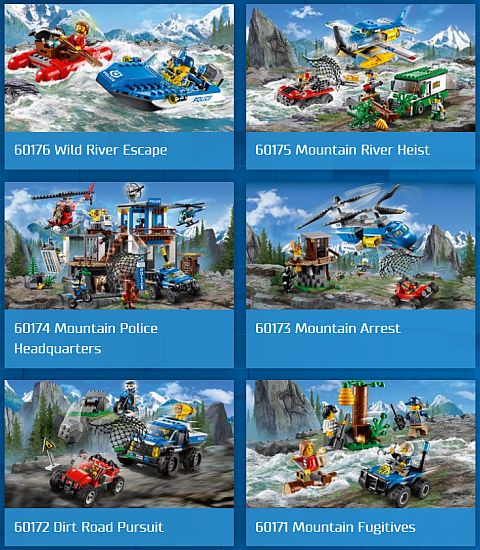 ➡ SMALL LEGO CITY MOUNTAIN POLICE SETS: The smallest of the LEGO City Mountain Police sets is the #60170 LEGO City Off-Road Chase with two minifigures, a police motorcycle and a little brick-built hiding spot for stolen gems. Note that the police officer’s dirt bike helmet is brand new piece, and his printed pants are another very useful part. Also, the motorcycle comes in the very rare blue color (it only appeared once in a LEGO Jurassic World set from 2015). 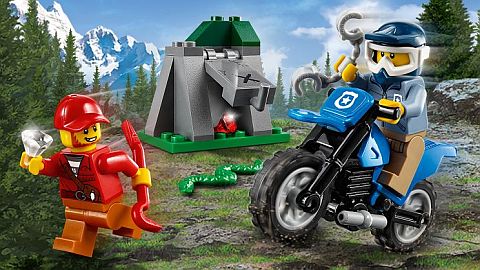 The second smallest LEGO City Mountain Police set is the #60171 LEGO City Mountain Fugitives with two cops, two robbers, a small vehicle a small tree, and a tree log. This is the smallest set with the new beehive piece, which, conveniently fits on top of a minifig’s head! Great little set in every way!

The #60176 LEGO City Wild River Escape includes two minifigs two boats, a few accessories and a skunk. I would say that from the three small sets this is the least interesting, especially considering that it has the highest price ($20). It is not a bad set, it’s just offers less variety, play-features, and new parts than the other two small sets. You can get both of the smaller sets for less than this one, and end up with six minifigures and better play-features and parts-selection overall.

➡ MEDIUM LEGO CITY MOUNTAIN POLICE SETS: If you want to get deeper into the LEGO City Mountain Police collection, the three medium-size sets offer a lot of options. The #60172 LEGO City Dirt Road Pursuit includes three minifigures, two vehicles and another one of the very rare blue motorcycles. The #60173 LEGO City Mountain Arrest features a large police helicopter, a mountain hideout for the badguys (with another beehive!), a small vehicle, and the always very desirable bear. And you also get four minifigures, including one badguy in his undies with fun paw prints! The #60175 LEGO City Mountain River Heist includes three great vehicles, a small tree, and four minifigures. This is a great set for playing out a fast action robbery scene. 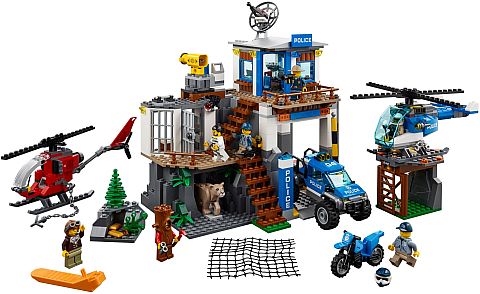 ➡ LARGE LEGO CITY MOUNTAIN POLICE SETS: The largest of the LEGO City Mountain Police sets is the #60174 LEGO Cit Mountain Police Headquarters. This is an interesting take on the usual police station, with a more rugged feel. There is net shooter on the roof, jail cell with breakout wall/door, and a cave under the jail cell with a mountain lion. There is also a separate helipad and a small hiding spot for gold bars, a police helicopter, a second helicopter for the badguys, a police 4×4 vehicle, and a blue bike (the third in the collection!). The seven minifigures include a police chief, a pilot, two officers and three badguys. And check out that fun tree-stump costume! (You can use the video-player below to watch reviews of all seven sets.)

All in all, the LEGO City Mountain Police collection is a winning series with not a single bad or boring set. And there is something for every budget! Lots of new parts, great vehicles, nicely decorated minifigures, and fun play-features. You can’t really go wrong with any of the sets here. If you want to take a closer look, you can find them under the LEGO City section of the Online LEGO Shop. 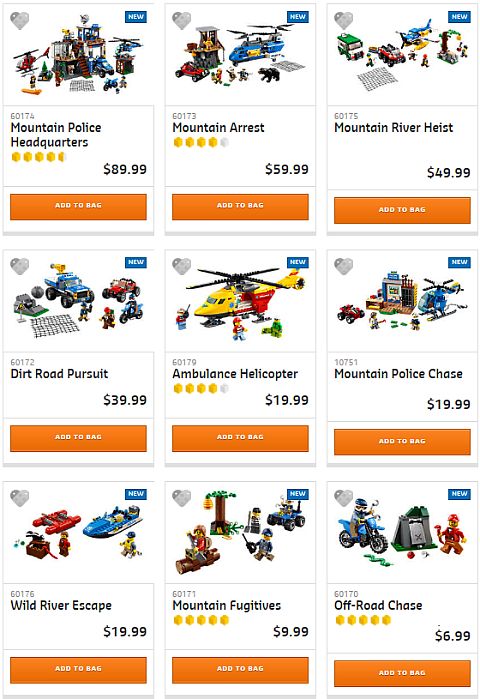 What do you think? How do you like the LEGO City Mountain Police collection? Do you have any of the sets already? Feel free to share your own thoughts and reviews in the comment section below! 😉