by Thita (admin) on February 13, 2018
in Featured LEGO Creations

As we have discussed the other day (see: LEGO Ideas Latest News & Updates), the LEGO Ideas team recently made a decision to not approve any of the fan-created projects in the latest batch under review. One of the projects that was effected is the NASA Saturn V Launch Umbilical Tower that was meant to be a companion set for the highly impressive and very popular #21309 LEGO Ideas NASA Apollo Saturn V.

There has been a lot of anticipation by LEGO fans, hoping that the project will be approved by the LEGO Ideas team. However, due to the sheer size of the tower (almost 3,000 pieces, which is over a 1,000 pieces more than the Saturn V itself), and the fact that it would only appeal to those who bought the #21309 LEGO Ideas NASA Apollo Saturn V already, it just wasn’t the right fit for the LEGO Ideas product line. 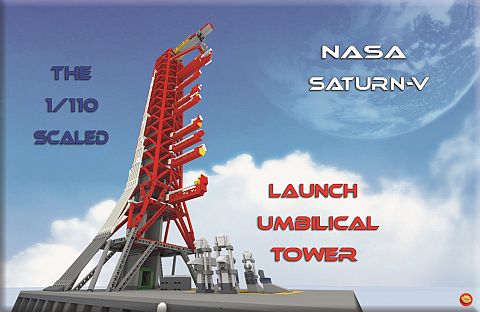 Now that the project has been shelved, the creators Valerie Roche and Emmanuel Urquieta decided to release the instructions for anyone who would like to build it. So, if you already have the beautiful #21309 LEGO Ideas NASA Apollo Saturn V, and you would like to make it even more impressive, you can download the parts list and building instructions to make your own NASA Saturn V Launch Umbilical Tower. (UPDATE: building instructions and parts-list are no longer available.)

The LEGO version of NASA Saturn V umbilical tower set features the launch tower itself as well as the launch pad. The tower includes the crew elevator and ways for the crew to work on the rocket and inject fuel. Notice that all the pipes and fuel lines have been replicated as technically possible on the LEGO model. 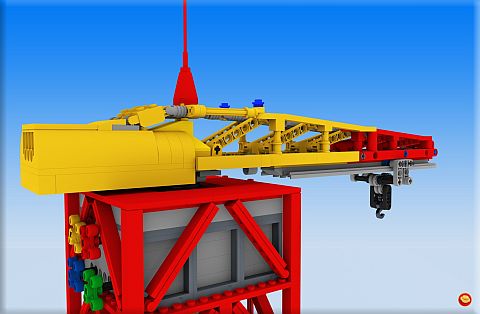 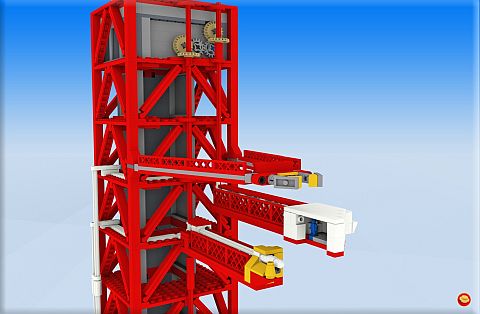 The yellow control is for the rotation of the crane on its central axis either to the right or to the left. The red control is for raising or lowering the hook. The blue control is for the gateways rotation during takeoff (at this time, the upper gateway with the white box, pivots to the right while the other 8 gateways are pivoting to the left). The green control is to go up or down with the elevator, from level 0 (top of the platform) to the sixteenth floor of the crane (in the platform, there is a mechanism to stretch with two elastics the cable which makes a return trip). 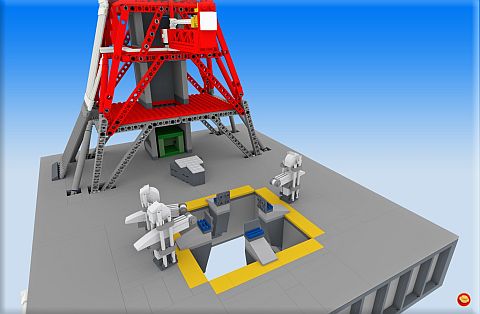 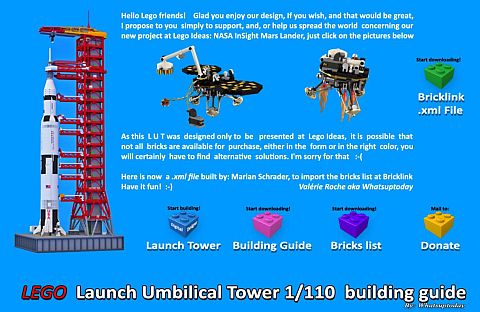 Please note that this is a massive model, and although a parts list and building instructions are provided freely, you will need to shop for the necessary parts yourself. You best option to get the parts you don’t already have is BrickLink, the largest online LEGO marketplace. LEGO fans who already built the model share that it includes some rare and discontinued parts, which will make the model very expensive (if you don’t already own the pieces). You may want to play around with the LEGO Digital Designer file of the model to see if you can swap out some of the hard-to-find parts with cheaper alternatives. 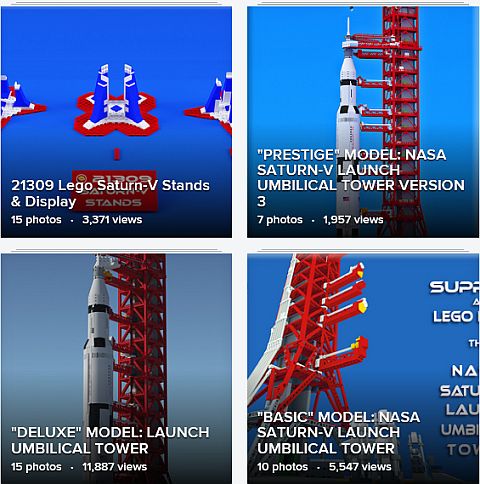 In addition to the NASA Saturn V launch Umbilical Tower posted on LEGO Ideas, the project has a couple of other variations as well. You might want to check these out before settling on a final version for yourself. There is also a dedicated Facebook page for the model with relevant discussion (no longer available). Plus, the creator of the project also provided a couple of very simple alternative stands for the LEGO Ideas Saturn V, which you might consider building if your budget it smaller. Below are the links to download the parts list and building instructions, as well as additional resources I mentioned and you might find useful:

While there are many ways to display the #21309 LEGO Ideas NASA Apollo Saturn V (we discussed some of them here: LEGO NASA Apollo Saturn V Display Ideas) the LEGO version of the NASA Saturn V umbilical tower is definitely a beautiful match. The red looks striking next to the white and black of the rocket. Building the umbilical tower is a challenging and expensive project, but if you are up to it, this is your chance to build it as the designer intended.

What do you think? Do you have the #21309 LEGO Ideas NASA Apollo Saturn V already? How are you displaying it? Are you considering building an umbilical tower or another more substantial stand for it than the one that comes with the set? Feel free to share your thoughts and discuss in the comment section below!