The new wave of LEGO Star Wars sets, mostly related to the upcoming Solo: A Star Wars Story film (release date May 25th) became available just about a week ago, so it’s time to take a closer look. Below, we will discuss each of the new LEGO Star Wars sets, and I will also include video-reviews by JANGBRiCKS, so you can see them in more detail. 🙂 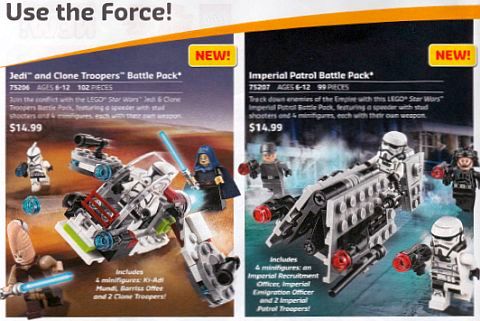 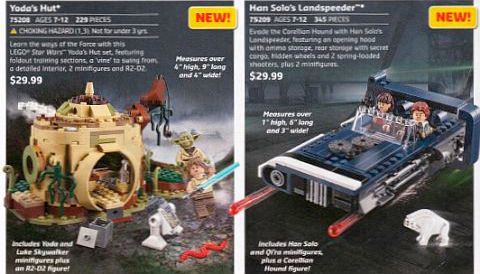 The #75208 LEGO Star Wars Yoda’s Hut takes us all the way back to Dagobah in the first Star Wars films. The set features Yoda’s swamp home with foldout training sections where Luke can balance boxes and stand on one arm to demonstrate his fledgling Jedi powers. There’s also a Force jump function that can be attached to the front or back of the model. Inside, there’s a folding bed, fireplace, a selection of food and furnishing elements, plus a secret compartment under the floor. There’s even a window at the side so R2-D2 can peer in. Frankly, I’m not too fond of the design of this set. It just doesn’t look as organic to me as in the film, and I do know that LEGO can build better huts that this. However, I think the colors are nice, so perhaps this set would be a good candidate for a redesign project. Yoda, Luke, and R2-D2 are included. The price is $29.99, and the set is available at the LEGO Star Wars section of the Online LEGO Shop.

We also get two new landspeeders, both from the Solo: A Star Wars Story film. The #75209 LEGO Star Wars Han Solo’s Landspeeder (see picture above next to Yoda’s Hut) features an open cockpit, opening hood with storage compartment, removable engine, rear storage compartment with secret cargo, hidden wheels for a hover effect, and two spring-loaded shooters. Young Han Solo and Qi’ra are also included, along with a Corellian Hound. The #75210 LEGO Star Wars Moloch Landspeeder (see picture above) features an open cockpit, storage hold at the rear, hidden wheels for a cool hover effect, a 6-stud rapid shooter for intense action play, and an opening cage to hold two Corellian Hounds. The two minifigs included are Moloch and Rebolt. I quite like both of these landspeeders; nice colors, nice shapes, great minifigs, and great play-features. Check out the video-reviews further below for more details. 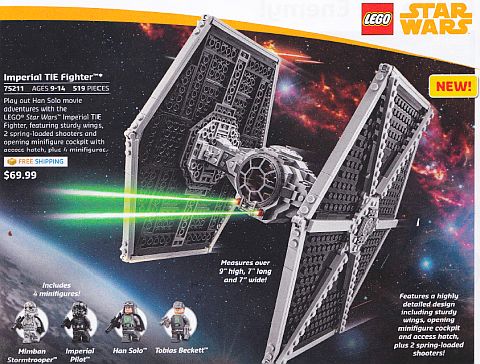 Now we are getting into the bigger sets territory. The #75211 LEGO Star Wars Imperial TIE Fighter is… well… yet another TIE Fighter we have seen many times in the past, however the four minifigs are new; an Imperial Pilot, Han Solo, Tobias Beckett (in Mimban Stormtrooper disguise) and a Mimban Stormtrooper. More interesting is the #75212 LEGO Star Wars Kessel Run Millennium Falcon with a fresh white and blue color-scheme and a detachable escape craft at the front. Other features include a cockpit with detachable canopy and enough room for two minifigs, two spring-loaded shooters, sensor dish, ramp, rotating top and bottom laser turrets with two gunner seats, and opening hull plates for easy access to the detailed interior. The interior includes a cargo area with couch and Dejarik hologame table, bar, bunk, missile storage compartment, and a buildable hyperdrive with repair tools. Minifigs included are Han Solo, Chewbacca, Qi’ra, Lando Calrissian, Quay Tolsite, a Kessel Operations Droid, plus a DD-BD droid. 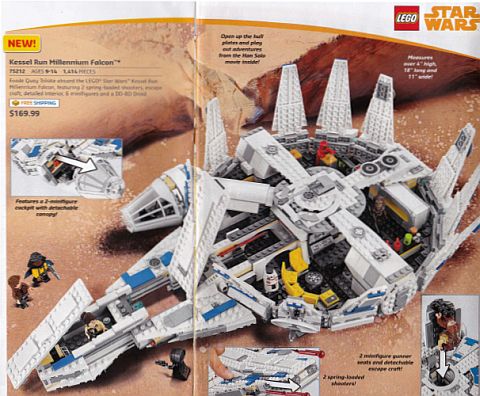 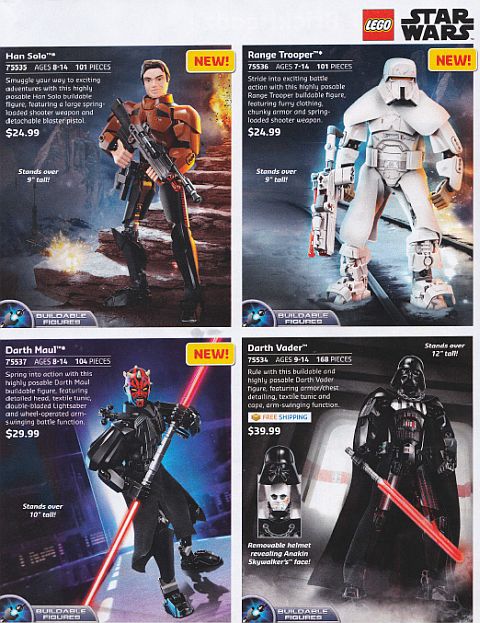 There are also a couple of new LEGO Star Wars BrickHeadz sets related to the Solo: A Star Wars Story. The #41608 LEGO Star Wars Han Solo, and the #41609 LEGO BrickHeadz Chewbacca. Han’s BrickHeadz figure is spot on, but Chewy has been getting mixed reviews. His head is just so strange; somewhere between a cute puppy and a creepy monster who is set out to steal your soul. The good thing about BrickHeadz though is that it’s easy to rebuild them. Both characters are available under the LEGO BrickHeadz section of the Online LEGO Shop. 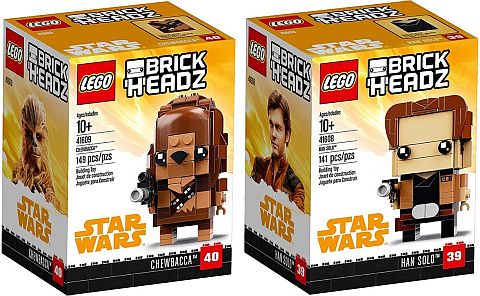 In the video-player below, I have included reviews of the new Star Wars sets, so you can see them in more detail. You can use the drop-down menu in the upper left corner to select the review you would like to watch, or you can just let them play one after the other.

Also, remember that from now until May 3rd, you will get a #5005376 LEGO Star Wars Darth Vader Pod with LEGO Star Wars purchases of $60 or more. This is a highly desirable set in the LEGO Collectible Pods series, as well as for Star Wars fans, so make sure you don’t miss out. While the included version of Darth Vader is not exclusive to the pod, the pod itself has a very nice chromed finish, and the lid comes with a special lenticular feature, displaying either the LEGO Star Wars logo, or the Death Star laser ready to fire, depending on how you tilt the lid. The promotion is available at official LEGO stores and the Online LEGO Shop. 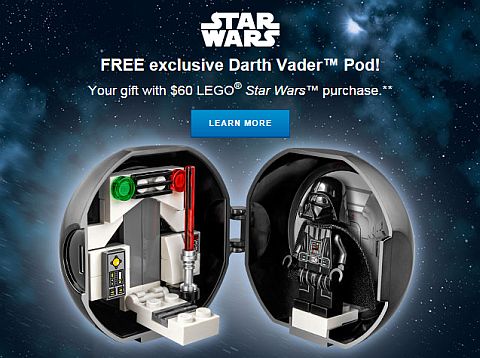 What do you think? How do you like all the new LEGO Star Wars Solo sets? Are you planning to get any of them? Do you have a favorite? Feel free to share your thoughts and own reviews in the comment section below! 😉