The Toys That Made Us LEGO episode coming!

The Toys That Made Us television series is an eight-episode documentary that focuses on the history of important toy-lines. The first four episodes started airing on Netflix back in December of last year, covering Star Wars, He-Man, Barbie, and G.I. Joe. The next four episodes will be available on Netflix in just a couple of days (May 25th), featuring LEGO, Transformers, Hello Kitty and Star Trek. 🙂

Of course, as LEGO fans, we are most interested in the episode about LEGO, but the other episodes are very interesting too. The first episode about Star Wars covers how both Mattel and Hasbro rejected George Lucas to produce toys for the Star Wars movie. Eventually, Lucasfilm signed with Kenner Products, a small toy company that was later purchased by Hasbro. The second episode is about the history of Barbie, one of the most influential toys in modern history, selling over a billion dolls globally. The third episode discusses the initial success and eventual demise of the Masters of the Universe action figure line by Mattel. And the fourth episode covers the first action figure in toy history and one of the most influential boys’ toys of all time, Hasbro’s G.I. Joe. 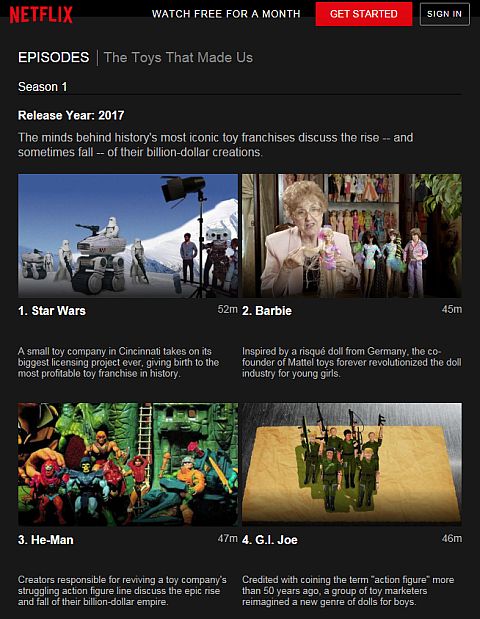 If you would like the watch the LEGO episode and other upcoming episodes, they will be available streaming on Netflix on May 25th. Below is the trailer for the four new episodes, featuring the history of LEGO, Transformers, Hello Kitty and Star Trek.

What do you think? Are you looking forward to the LEGO episode of The Toys That Made Us documentary? Have you watched any of the previous episodes? Which toys, besides LEGO, had an impact on your life? Feel free to share and discuss in the comment section below! 😉