There is an interesting LEGO-related project on Indiegogo that I was recently made aware of. LOMO is an interactive coding game introducing children to all four elements of STEM (Science, Technology, Engineering, Math) by using a LEGO-compatible robot, control board, and coding bricks, but without the need of an app or other screen-based software. LOMO is created by the German company, Kinematics, who ran a very successful campaign previously with the introduction of their Tinkerbots construction kits. Below is the press-release about their new project, as well as some other details from their Indiegogo campaign page. 🙂 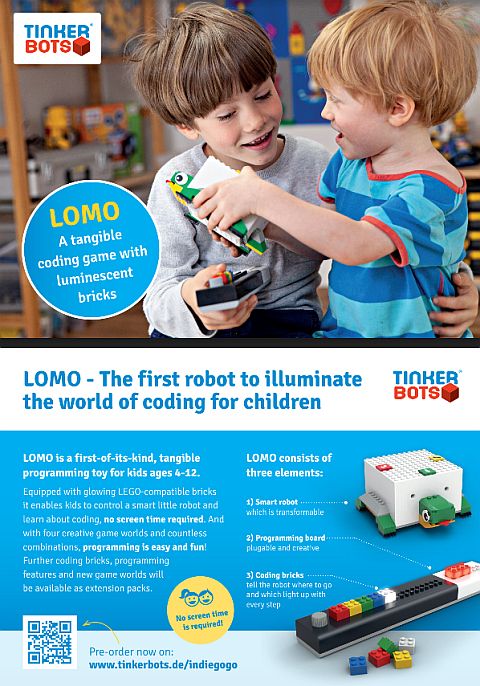 (Berlin, Germany, June 5, 2018) – Today, Kinematics GmbH launched LOMO, a unique coding game that introduces children ages 4-10 to the world of logic, without any screens. The colorful starter kit is now available on the Indiegogo crowdfunding platform starting at $99 USD. The campaign also offers extension packs and kits for educators.

LOMO follows on the heels of the company’s successful 2014 campaign for Tinkerbots robotic building kits, which raised $300,000 USD from more than 850 Indiegogo backers and is now sold in more than 600 retailers in 18 countries.

The LOMO Starter Kit includes a LEGO-compatible robot, programming board, luminescent coding bricks, and a game called Turtle Island. Players arrange 25 cards to create their unique adventure landscape, and then code their robot to carry out set tasks.

Players build and customize their robot before telling it where to go, by setting the corresponding coding bricks on the programming interface. Each color represents a different coding feature, and the bricks light up as the code is executed and the robot navigates the adventure map.

The company’s goal was to create a new kind of toy that combines technology, play and physical programming to teach children the most important skills for the 21st century. “We believe that children are the innovators of the future and STEM education is key,” said Co-Founder Leonhard Oschütz. “Programming opens new opportunities for a brighter future for the younger generation.”

LOMO was designed in Germany by Kinematics’ team of engineers, in collaboration with educational experts. Three LOMO extension packs allow kids to explore imaginary game worlds, dodge dangerous meteorites, navigate labyrinths, construct a beaver dam, and much more. Each include their own playmats, figurines, and tasks that can be solved independently, collaboratively, or against friends.

“Being able to understand and to use a programming language helps children & teenagers to master the challenges in our digital world,” said Co-Founder Christian Guder. “LOMO motivates children to try out their own ideas and to act solution-oriented. By assembling the colorful bricks on the programming board, children can easily understand the principles of software without any software or apps.”

With LOMO, kids can play with algorithms, procedures and loops. When the coding bricks light up they even help with debugging the code. The programming board has two sections for basic coding and advanced functions. Children can even compress long coding sequences into one operating brick to keep code short and simple. “It is very important to prepare younger generations for the challenges of the digital era, and actively take part in applying key technologies to the real world” said CEO Adrienne Fischer. “We believe that LOMO shows that key technology can be dealt with in a fun way.”

The Tinkerbots project emerged from Bauhaus University in Weimar, during a study assignment by LEGO enthusiast, Leonhard Oschütz. He worked meticulously on first prototypes, and founded Kinematics with Christian Guder and Matthias Bürger in September 2013. Adrienne Fischer joined the team as CEO in 2016. The company’s mission is to introduce children to the world of technology and coding with innovative robotic toys. Since shipping Tinkerbots in 2015, the team has grown to more than 30 people with new products launching regularly on the Tinkerbots website, available at retailers worldwide. Product design and manufacturing proudly takes place in Germany.

The Indiegogo fundraising campaign for LOMO was launched on June 5th, and they are already close to halfway to reach their fundraising goal by pre-selling starter kits and game packs. The estimated delivery of the LOMO robotics kits is sometime this fall. I have included above a couple of introductory videos so you can see how LOMO works, and if you would like to learn more, you can visit their Indiegogo page. 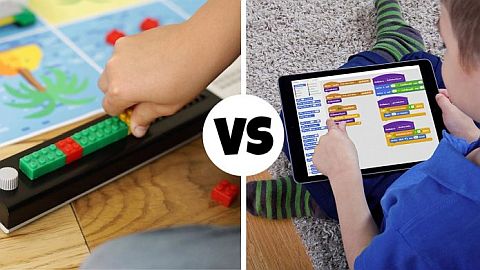 With tech sector jobs on the rise, STEM for kids is definitely of great importance. However, there is also major concern about kids spending way too much time on screens both for education and leisure. To have a robotics kit that avoids screens altogether while still remaining relevant is a big plus, and firmware upgrades will still be possible via Bluetooth/mobile app. As you can see, although the robot is compatible with LEGO, it is also big and chunky, which means building pretty things is not going to be its forte. However, for parents and educators who want to get their kids interested in coding, LOMO could be a good option. 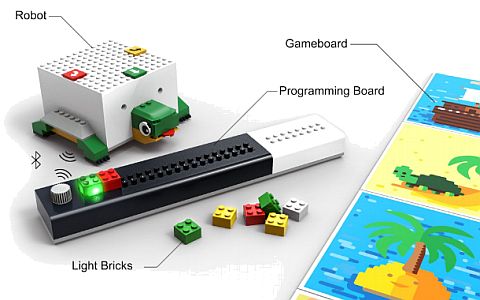 As you know, LEGO themselves have been working on revamping their robotics kits with the release of the #17101 LEGO BOOST Creative Toolbox, and sets that are compatible with LEGO BOOST, like the #60194 LEGO City Arctic Truck we talked about the other day, and the upcoming #70652 LEGO Ninjago Stormbringer dragon (already available in some countries). The updated LEGO Power Functions system is coming as well, although it is not clear yet if it will be compatible with LEGO BOOST. And, there is also the LEGO Education WeDo robotics kit, which offers a whole STEM-based curriculum. Even with those options, LEGO-compatible robotics is a big enough field, that there is room for other players. Anything that assists children in getting a quality education that prepares them for the future while remaining fun, is a good thing in my book. 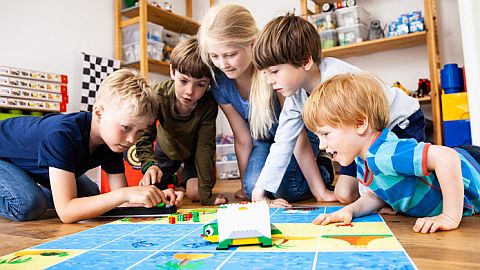 What do you think? How do you like the idea of the LOMO coding game? Have you ever experimented with other LEGO or LEGO-compatible robotics kits? Feel free to share your thoughts and discuss in the comment section below! 😉