Using LEGO pieces to build mechanical creations is a popular hobby, as evidenced by all the crazy and impressive contraptions featured on LEGO forums, blogs, and YouTube channels. LEGO themselves runs a very interesting series on their own YouTube channel titled Beyond the Instructions, featuring all kinds of LEGO-built machines. We talked about them here and here. If you are interested to build your own mechanical creations, it is very useful to know the limitations of LEGO as a building medium before investing time and money into a complex project. 🙂 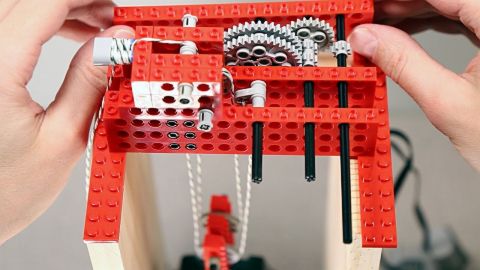 A YouTube channel that I recently discovered focuses on testing the capabilities and limitations of LEGO Technic elements. Aptly named the Brick Experiment Channel, they test the breaking points of LEGO pulleys, gears, motors, axles, wheels, and more. At the time of this writing, there are only six videos on the channel, but they are all very educational and could be useful in your own LEGO creations. 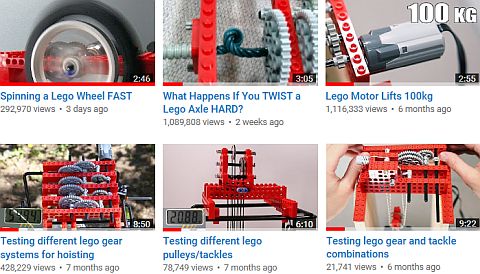 The first experiment demonstrates how much weight can be lifted with LEGO tackles and a LEGO Power Functions M-motor, and what is the best combination of pulleys and tackles to lift the maximum amount of weight. The experiment does a similar test with different gear combinations. The third experiment combines gears and pulleys/tackles to generate the maximum possible lift with a LEGO Power Functions M-motor. All these tests are done carefully in small increments to be able to record the results, and learn from mistakes and blow-ups that happen along the way. Also, notice the effect weight has on the support beams and other parts! 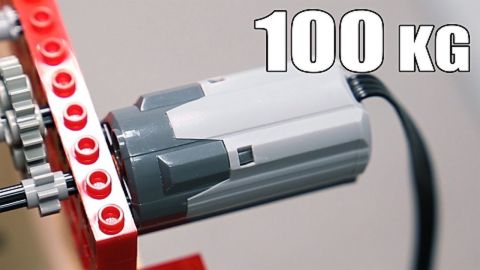 Speaking of the effect of weight on LEGO parts, the fourth video shows what happens when a LEGO Power Functions M-motor with gears and pulleys tries to lift a hefty 102.2 kg (gear ratio 15:1 and tackle velocity ratio 8:1). I particularly like the slow-motion demonstration of the axles, beams, and strings at their breaking point. Lots to learn, and learn from! (By the way, only LEGO parts were used for these tests with the exception of the strings.)

In the sixth and final experiment (so far), a LEGO wheel is tested to see how fast it can rotate using LEGO motors and various combinations of gears. It can actually handle 2850 RPM pretty well. There are plans to redo the same test without a tire on the wheel, and with some lubrication, which may allow higher RPM. You can watch all the videos in the player below.

While there are only six videos on the channel at the time of this writing, they are enthusiastic to continue with future projects. They are also open to suggestions, so if you would like to see some other tests, leave them a comment on their YouTube channel, and subscribe to get updates. Experiments like these are particularly helpful if you are working on large LEGO models that need to handle weight and/or have moving components. If you like to play with mechanical models, some of the larger LEGO Technic sets include parts and mechanisms that are great for experimentation and learning. A couple of currently available examples are the #42055 LEGO Technic Bucket Wheel Excavator, and the #42070 LEGO Technic 6×6 All Terrain Tow Truck. You can find them at the LEGO Technic section of the Online LEGO Shop. 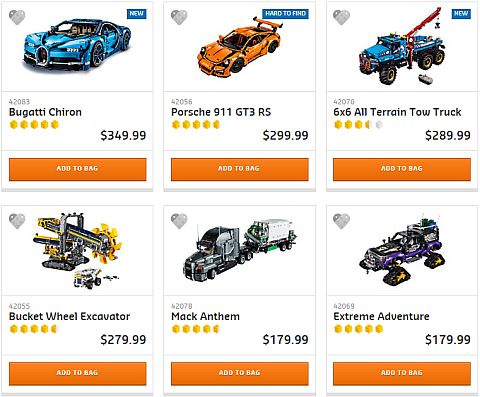 What do you think? How do you like these demonstration videos? What other experiments would you like to see? Have you ever tested the capacity of your own LEGO parts or models? Feel free to share and discuss in the comment section below! 😉