A few days ago, BrickLink, the online LEGO marketplace, announced that they are teaming up with the LEGO Group for a new venture called the AFOL (Adult-Fans-Of-LEGO) Designer Program. Through this program, LEGO fans can submit their own designs, and chosen models will be produced as limited-edition sets to celebrate the 60th anniversary of the LEGO brick. See details below. 🙂 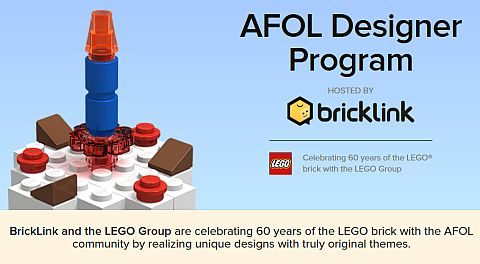 ➡ WHAT IS THE AFOL DESIGNER PROGRAM? – BrickLink and the LEGO Group are celebrating 60 years of the LEGO brick with the AFOL community by realizing unique designs with truly original themes. Through this program, your design can become a limited-edition 60 Years Anniversary set!

➡ HOW DOES THE AFOL DESIGNER PROGRAM WORK? – The program will have three main phases. The 1st phase is accepting entries. To give LEGO fans some time to think about what they would like to submit, BrickLink will accept entries until November 18th. The LEGO design team will review submissions and up to 20 finalists will be selected. The 2nd phase of the process is crowdfunding, which will begin in February 2019. During this phase, the selected designs will be announced, displayed, and made available for pre-order. During the 3rd phase of the program, successfully crowdfunded designs will become a limited edition 60 Years Anniversary set exclusively available through BrickLink. Orders will begin shipping in April of 2019.

➡ WHY SHOULD I SUBMIT MY DESIGNS? – Besides being able to share your design with the AFOL community, your model will also be reviewed and potentially produced as a limited-edition set without design modification. On top of that, BrickLink will pay 10% of total sales revenue to designers for all successfully crowdfunded designs, including pre-orders. You will retain full IP rights for non-selected designs, meaning you can freely use your original designs for any other purpose after the event. Even if you aren’t planning to submit your own design, but you would like to make some suggestions for designers to build, you can share your ideas in the Studio 2.0 forum. 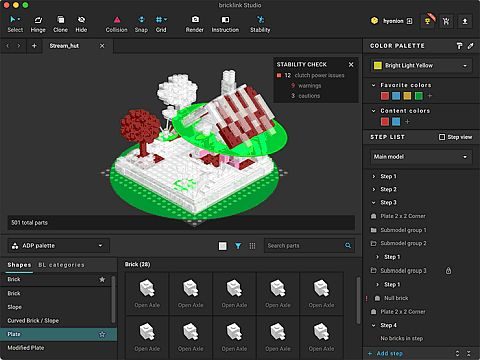 If you do plan to participate in this interesting new venture, I highly recommend that you read through the FAQs page carefully, as it contains a lot more details than the main announcement. For example, the BrickLink team makes it very clear that only submissions in Studio 2.0 will be accepted. Other file formats, such as LEGO Digital Designer and LDraw, may be opened in Studio 2.0 and then saved in the appropriate format. Also, it is interesting to note that submitted models will be hidden before the crowdfunding phase begins. As far as what to build, there are no prescribed topics or themes, and the BrickLink team is looking for as much variety as possible. In fact, special consideration will be given to unique designs with truly original themes. Each design will be rated according to originality, visual appeal, building experience, use of parts, and several other factors. Since this program is part of the celebration of the 60th anniversary of the LEGO brick, a celebrated LEGO designer with unique expertise and a historical understanding of the LEGO system will supervise the evaluation process. 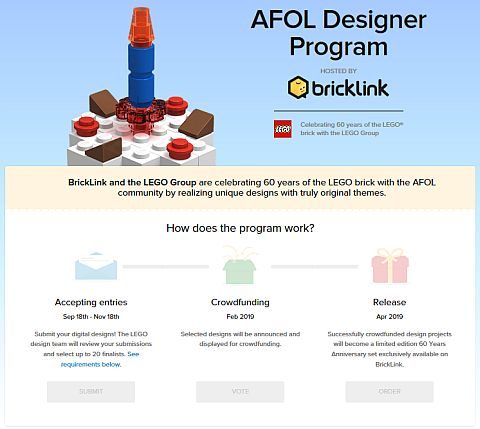 There are some other miscellaneous rules that are interesting. These special, limited-edition sets will only be sold by Studio Shop, a store owned and operated by BrickLink itself in Southern California. There is a limit of 3 copies per design per customer, regardless of whether the copies are purchased during the crowdfunding stage or the general sales period. For winning models, designers must give the LEGO Group exclusive use of the rights for the duration of the program plus up to 3 years. After that point, all restrictions will be lifted and the design rights will be restored to the original designer. For designs that are not chosen, rights will remain with the original designer. You must be at least 18 years old to submit a project to the AFOL Designer Program. 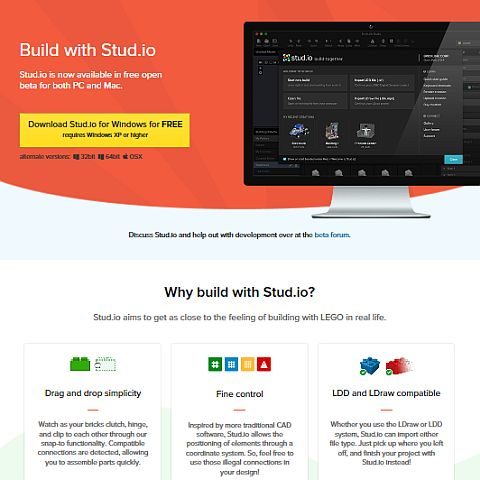 What do you think? How do you like the idea of the AFOL Designer Program? Do you think it will be successful? Are you planning to submit your own projects? Do you have any questions, comments, etc. about the program? Feel free to share and discuss in the comment section below! 😉