March is bringing us some new LEGO sets and promotions, so let’s take a look. Please note that the LEGO Store Calendar no longer lists the upcoming promotions for the entire month, so it’s a lot more difficult to plan ahead. However, we do know at least some of the offers that we can expect and we will keep you updated as new promotions come up throughout the month. 🙂 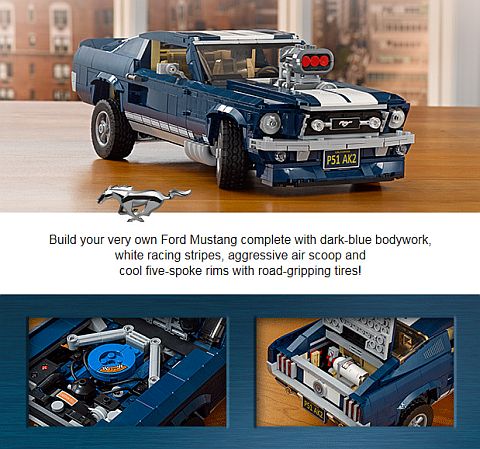 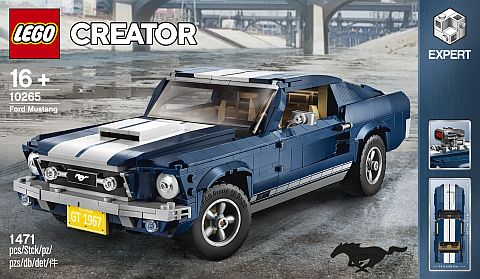 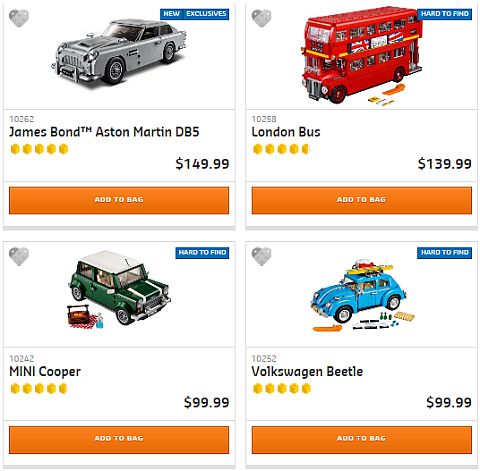 ➡ FREE LEGO FORD MUSTANG KEY RING: If you like the #10265 LEGO Creator Ford Mustang, but you have been thinking about purchasing it later, LEGO is giving you a really sweet incentive to act now; a cool Ford Mustang key ring for LEGO VIP members. The key ring features the LEGO logo on one side, the Ford Mustang logo on the other side, and a small LEGO VIP tag as well. This offer is valid until supplies last at official LEGO stores and the Online LEGO Shop. 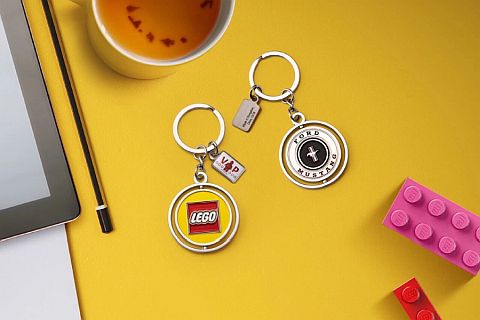 ➡ LEGO IDEAS THE FLINTSTONES AVAILABLE: The #21316 LEGO Ideas The Flintstones set is now available for everyone, not just LEGO VIP members. The set is a bit controversial, as Dino, the kids, and some of the accessories were removed from the original fan-designed submission, and the faces of the minifigs were changed, but it is still a sweet looking set with nice details. You can read more about it at LEGO The Flintstones Pictures and More!, and find it at the LEGO Ideas section of the Online LEGO Shop. 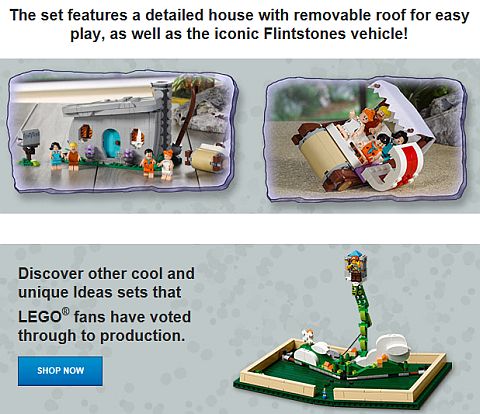 ➡ THE LEGO MOVIE 2 BRICKHEADZ: The LEGO Movie 2 sets became available earlier this year, but there are four sets that were released just last month as exclusives at Target and Wal-Mart. The #41634 LEGO BrickHeadz Emmet, #41635 LEGO BrickHeadz Wyldstyle, #41636 LEGO BrickHeadz Benny, and #41637 LEGO BrickHeadz Sweet Mayhem sets are especially well designed, and include some sought-after pieces like the printed 1×4 brick with the LEGO Classic Space logo. Unfortunately, the sets have been difficult to find, however the instructions can be downloaded directly from LEGO’s website. Also, the sets should be available sometime soon at The LEGO Movie 2 section of the Online LEGO Shop.

➡ LEGO-XTRA STICKERS: The LEGO-xtra collection has become a great resource for useful minifig accessories and other interesting small parts (see: LEGO-xtra Playmats & Accessory Packs). Since the introduction of this new collection, LEGO has been steadily adding more products. This month, they are introducing the #853921 LEGO-xtra Brick Stickers, with five town-themed sticker sheets, plus 12 LEGO town starter elements. While stickers are not as popular with adult LEGO fans, they are usually enjoyed by kids. Below is a picture of the five sticker sheets, and you can find it at the LEGO-xtra section of the Online LEGO Shop.

➡ OTHER LEGO ACCESSORIES: Besides the LEGO-xtra stickers, there are some other interesting accessories LEGO added this month to their product line. Take a look at the #853902 LEGO Creative Bag Charm pack, the customizable #853913 LEGO Key Hanger, the #40360 LEGO Friends Name Sign that can be stylized with stickers and LEGO pieces in some of the more unusual colors. There is also the #853906 LEGO Greeting Card set with a buildable greeting card, and the LEGO 4×4 Brick Magnets are back (#853915 with classic LEGO colors, and #853900 with more recent colors). The #5005737 LEGO Movie 2 Unikitty Night Light is also sweet. My favorite new item however is the yellow #853910 LEGO Minifigure Ceramic Mug with a minifig smiley face! It’s a little hard to find these products as there is not a single category for them, but just do a search for their names or numbers at the Online LEGO Shop. 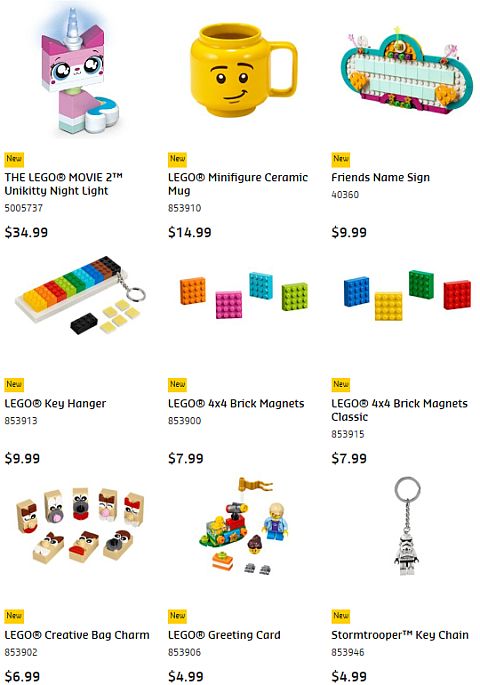 ➡ DOUBLE VIP POINTS ON SELECT SETS: LEGO is continues to offer two sets per month with Double VIP Points. For the month of March, the two sets are the #75893 LEGO Speed Champions 2018 Dodge Challenger SRT Demon and 1970 Dodge Charger R/T and the #42093 LEGO Technic Chevrolet Corvette ZR1. You can find them both at the Online LEGO Shop. 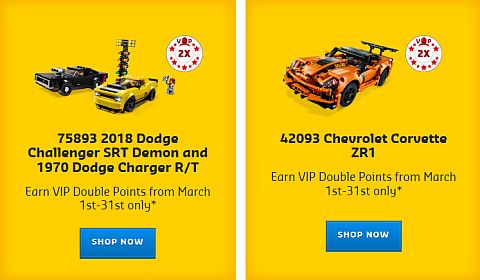 ➡ LEGO SETS ON CLEARANCE SALE: The clearance sale for older LEGO sets is still going on with over a hundred items on sale. This includes a couple of the large LEGO Star Wars figures, several other LEGO Star Wars sets, the previous generation of LEGO Ninjago flying spinners, other LEGO Ninjago sets, sets from The LEGO Ninjago Movie and The LEGO Batman Movie, LEGO Minecraft sets, LEGO Friends sets, LEGO Disney sets. Most of the key chains are 50% off, and there are also a bunch of other miscellaneous sets and accessories on sale. You can find them all at the SALE section of the Online LEGO Shop. 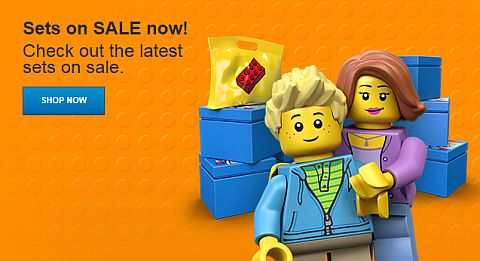 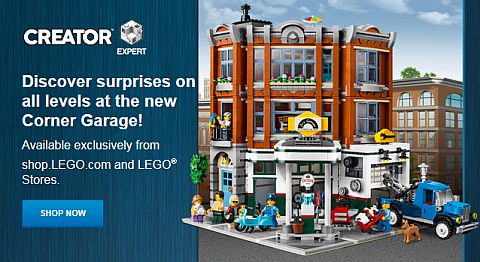 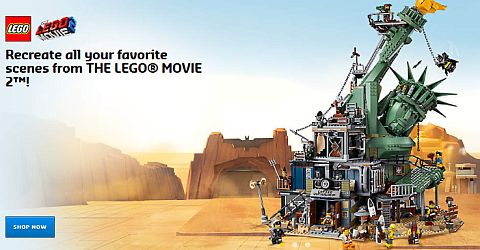 What do you think? Are you planning to get any new sets this month? And are you going to watch when it gets released next week? What new sets do you hope to see through the toy fairs? Feel free to share and discuss in the comment section below! 😉