Happy Halloween! It has been a tradition in the past few years that LEGO fan Jason Allemann, (a.k.a. JK Brickworks) builds some kind of candy dispensing contraption from LEGO bricks to interact with kids who come to his door. In 2016, Jason built a simple Halloween Candy Thrower using the LEGO MINDSTORMS EV3 robotics set. In 2017, Jason upgraded the device into a more detailed and decorated Mini Chocolate Machine. In 2018, Jason switched over to using the new LEGO BOOST robotics set and built what he calls the Vortex Candy Launcher. For this year, Jason went back to using LEGO MINDSTORMS for the Mini Chocolate Vending Machine. We talked about the first two contraptions in detail previously (see: LEGO Halloween Candy Dispenser Machines), so if you are interested to check them out and even build them, head over to that article. Today, we will discuss the last two builds from last year and this year. Enjoy! 🙂 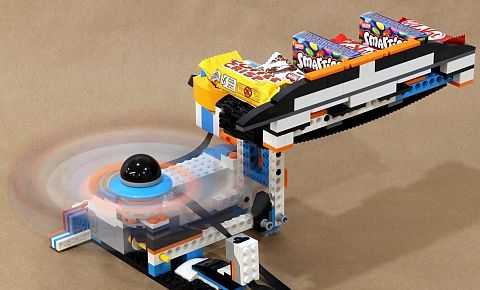 Unlike the first two candy dispensing contraptions that used LEGO MINDSTORMS, the Vortex Candy Launcher takes advantage of the capabilities of the #17101 LEGO BOOST Creative Toolbox. This is great, as LEGO BOOST is far less expensive than LEGO MINDSTORMS, and also uses newer technology. The Vortex Candy Launcher spins up the candy in a mini centrifuge, which acts much like a flywheel to store kinetic energy. Once it reaches top speed, an arm is raised under the armature to trigger the launch of the candy from the tray it is sitting in. You can see the contraption in action, with an explanation of how it works, in the video below.

If you are interested to build your own Vortex Candy Launcher, Jason included detailed instructions on building and programming your own. All you need are the pieces from the #17101 LEGO BOOST Creative Toolbox and a phone or tablet that can run the LEGO BOOST app (check compatibility requirements here). Once you have the set, head over to Jason’s website for step-by-step instructions on how to build and program the candy launcher. Here is the link: VORTEX CANDY LAUNCHER INSTRUCTIONS 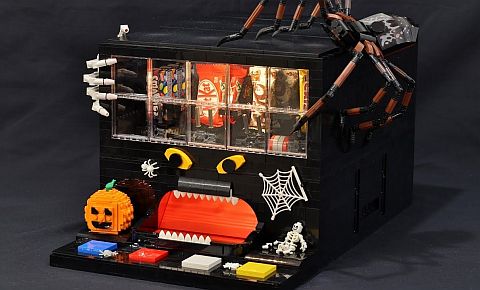 For Halloween this year, Jason built a much larger and more complex Mini Chocolate Vending Machine, which gives kids who came to the door the opportunity to choose which chocolate they receive. The Mini Chocolate Vending Machine dispenses one of four mini chocolates depending on which button is pressed at the front of the machine. The unit is powered by the LEGO MINDSTORMS EV3 control unit, four motors, and four touch sensors. Watch the video below to see how it works.

Although Jason explains how the Mini Chocolate Vending Machine works, he did not upload instructions for it at the time of this article. The vending machine is definitely fun, but my guess is that due to its size, complexity, and the number of MINDSTORMS components required, it’s likely the least practical for most LEGO fans to build. If you do have the LEGO MINDSTORMS kit, you may want to choose one of the other two candy dispensers, and if you have LEGO BOOST, you can pick the one from last year. Building something like this is a really fun family project, and it’s also a delightful surprise for kids who stop by for some Halloween candy. Both LEGO MINDSTROMS and LEGO BOOST are available at the Online LEGO Shop. 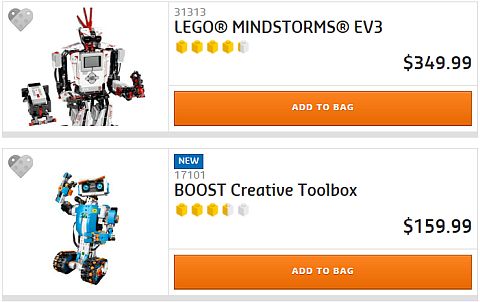 What do you think? How do you like these LEGO candy dispensers? Did you ever use LEGO contraptions for Halloween? Are you planning to build any for this year? Feel free to share and discuss in the comment section below! 😉