Hope you all had a great Halloween! With the beginning of November, we are now officially in the holiday season. This is a great time of the year for both solo projects and for building together with friends and family. And of course, it’s also the beginning of the holiday shopping season, which means retailers offering discounts and other ways to entice holiday shoppers. It’s still a bit too early to know what’s coming from all retailers, but LEGO already released the LEGO Store Calendar for November, so at least we can see what to expect from them. In addition, there are also some new sets available, so let’s take a look at everything happening this month! 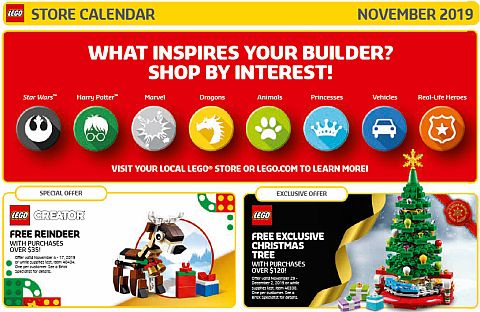 ➡ FREE LEGO REINDEER: November 4-17 you will get a free #40434 LEGO Reindeer with purchases of $35 or more. This is a cute little brick-built holiday set that could be used as a Christmas decoration. It is valid on all purchases at official LEGO stores and the Online LEGO Shop.

➡ FREE LEGO CHRISTMAS TREE: Towards the end of the month (November 29-December 2) there is a larger freebie with purchases of $120 or more. The #40338 LEGO Christmas Tree features a decorated Christmas tree on a platform, surrounded by a tiny LEGO train and some gift boxes. This offer is also valid on all purchases at official LEGO stores and the Online LEGO Shop.

➡ LEGO BLACK FRIDAY EVENT: There will be sales and deals after Thanksgiving on Black Friday weekend (November 29-December 2), but details are not yet known. Of course, there will be the above-mentioned free LEGO Christmas Tree, but also likely special offers for LEGO VIP members, sets on sale, etc. We will talk about this event more as information gets released. 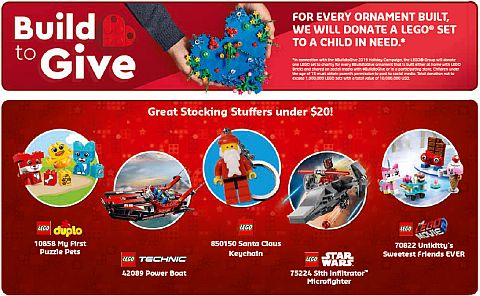 ➡ LEGO HOLIDAY GIFT SHOP: The online LEGO Holiday Gift Shop is now open. This is a special section of the Online LEGO Shop, which helps guide those who are purchasing gift items. Experienced LEGO fans may not need this section, but those who are not as familiar with current LEGO sets and themes, could greatly benefit from it. It has a section for the hottest gifts and exclusives like the #71044 LEGO Disney Train and Station, the #21319 LEGO Ideas Central Perk set, the #21318 LEGO Ideas Tree House, the #10267 LEGO Creator Gingerbread House, and more. The LEGO Holiday Gift Shop also has quick-links to current LEGO promotions, the sales page, and stocking stuffers (popular sets under $20). Again, this is a great page to direct those who would like to shop for Christmas but need a little help with making a selection. 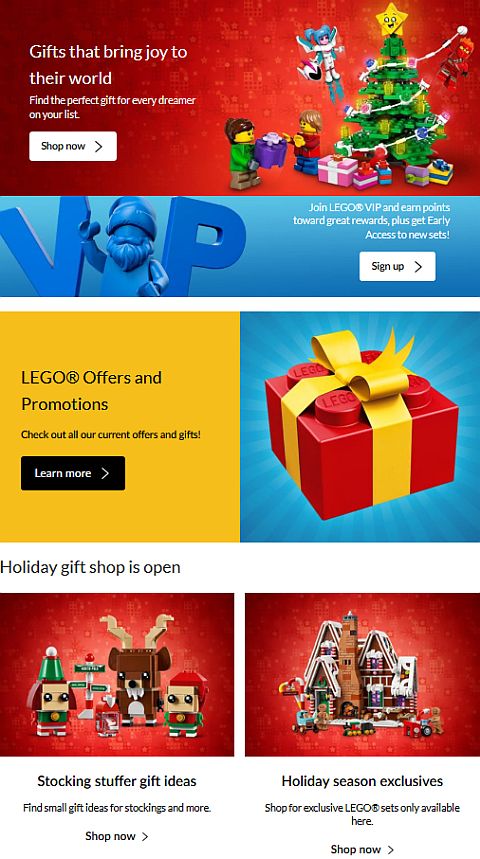 ➡ LEGO IDEAS DINOSAUR FOSSILS: The #21320 LEGO Ideas Dinosaur Fossils set is now available. We talked about this set in detail previously (see: LEGO Ides Dinosaur Fossil Set Coming!) Basically, the set features buildable, posable, highly detailed 1:32 scale models of Tyrannosaurus rex, Triceratops, and Pteranodon skeletons. They each come with a display stand to make them look like museum exhibits. The set also includes two minifigs: a skeleton and a paleontologist. The price is $59.99. This set should be very popular with kids and parents alike. It is available at official LEGO stores and the LEGO Ideas section of the Online LEGO Shop. 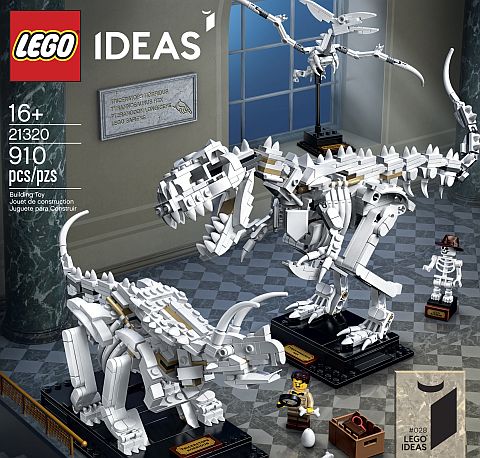 ➡ RECENTLY RELEASED EXCLUSIVE SETS: Although there are no big sets released this month, I just wanted to make sure you are aware of all the large sets that were released in the past couple of months you may consider for the holidays. The #75252 LEGO Star Wars Ultimate Collector Series Imperial Star Destroyer is the largest LEGO Star Wars set to date. Two very impressive large LEGO Technic sets were released last month; the #42110 LEGO Technic Land Rover Defender, and the #42100 LEGO Technic Liebherr R 9800 Excavator. The #71044 LEGO Disney Train and Station comes with a fully motorized train. The highly popular #21319 LEGO Ideas Central Perk set is finally back in stock. The #10269 LEGO Creator Expert Harley-Davidson Fat Boy would make a gorgeous gift for Harley fans. The #21318 LEGO Ideas Treehouse looks beautiful on display, and can be changed to fall colors to match the season. The #75936 LEGO Jurassic Park: T. Rex Rampage is another great set for fans of dinosaurs. The #10265 LEGO Creator Ford Mustang is another great set in the LEGO Creator vehicles line, and not as challenging as the LEGO Technic sets. You can find them all at the New tab of the Online LEGO Shop. Also, check the Sale section of the Online LEGO Shop for discounted sets.

➡ LEGO HOLIDAY SETS: The LEGO Winter Village set for this year is the #10267 LEGO Creator Gingerbread House, but there are other holiday sets as well. The #10254 LEGO Creator Winter Holiday Train, and the #10263 LEGO Winter Village Fire Station from previous years are still available. And we already talked about the four LEGO Advent Calendars (in the LEGO City, LEGO Friends, LEGO Star Wars, and LEGO Harry Potter categories). If you like LEGO BrickHeadz, you can also take a look at the LEGO BrickHeadz category for a cute Thanksgiving Turkey, Scarecrow, and Mr. and Mrs. Claus. You can find them all at the Seasonal Items section of the Online LEGO Shop. 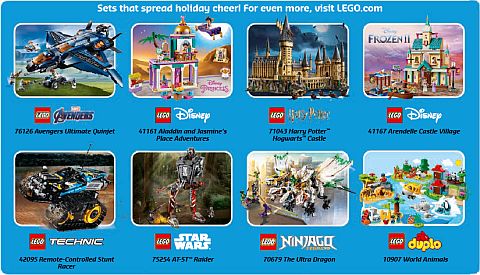 What do you think? Are you planning to work on any new LEGO projects this month? Anything special for the holidays? And what’s on your Christmas wish-list? Feel free to share and discuss in the comment section below!