An interesting piece of info that has been in the news lately and talked about on social medial as well as the LEGO Ambassador Forum is that one of the upcoming LEGO Technic sets, the #42113 LEGO Technic Bell Boeing V-22 Osprey has been canceled. Below is a bit of history on what happened, and LEGO’s official statement on it. It’s rare to see a LEGO set canceled so close to the release date (August 1st), so it’s worth talking about the event from the perspective of LEGO’s history. 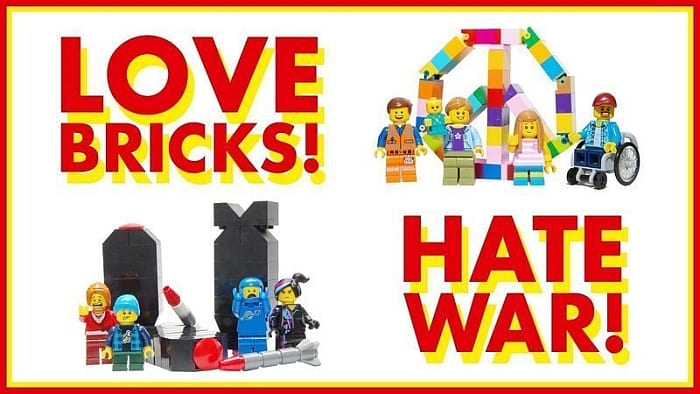 The #42113 LEGO Technic Bell Boeing V-22 was first displayed at the German Toy Fair earlier this year, with the announced release date of August 1st. The set has been pretty much flying under the radar since its original reveal, but LEGO Technic fans have been looking forward to it, especially because it includes a brand new LEGO Powered Up Hub with on-board controls. However, the German Peace Organization took note of the set and made the following statement. 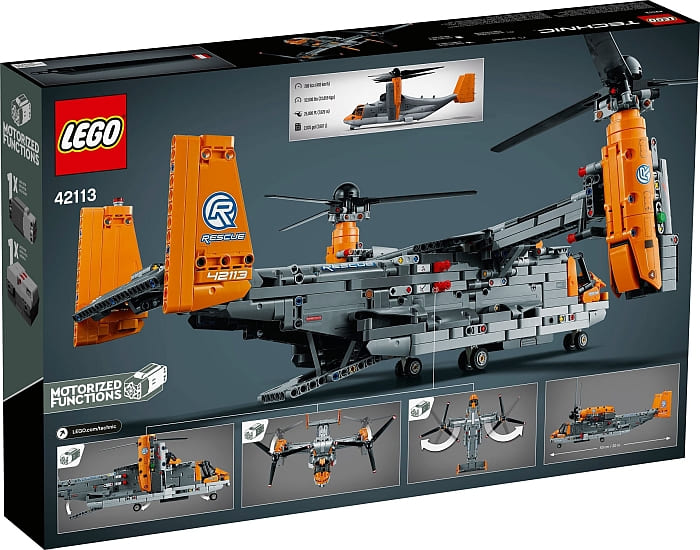 The LEGO Technic 42113 Bell-Boeing V-22 Osprey calls for trouble. The V-22 Osprey it is modeled on is a military freight aircraft. Four hundred planes are currently in use by the US armed forces, in Afghanistan, Iraq, Mai, and Yemen. These heavily armed aircrafts are often used in attack missions. The tilt rotor vehicles with vertical start-and-landing capabilities are produced by Boeing and Bell. According to data from the Stockholm International Peace Research Institute (SIPRI) Boeing has been the second largest arms company in 2018 with global arms sales totaling 26.08 billion Euro (29.15 billion US Dollars). According to the same data, Bell achieved rank 27 with a total of 3.18 billion Euro (3.5 billion US Dollars) in arms sales.

“Arms companies are never an acceptable cooperation partner for any toy company”, says Michael Schulze von Glaßer, political director of DFG-VK. The organization has published a study on the new LEGO set and its original model. Schulze von Glaßer continued; “The Danish company has subjected itself to corporate values ruling out any production of any military vehicle currently in use by armed forces globally. This violation of the company‘s own values is concerning. We have contacted LEGO multiple times earlier this year, asking for comment and offering our readiness for conversation about the cooperation with these arms companies and the new set. Especially since license fees will most probably be paid to the arms companies from each sale. This would mean, that with every buy we as customers directly fund arms producers. We have started a petition asking LEGO for an immediate end to the cooperation with arms companies and a return to the peaceful company values. We all love bricks but LEGO has deviated to the wrong path. We hope to set them back on track with this campaign and remain open for communication.” 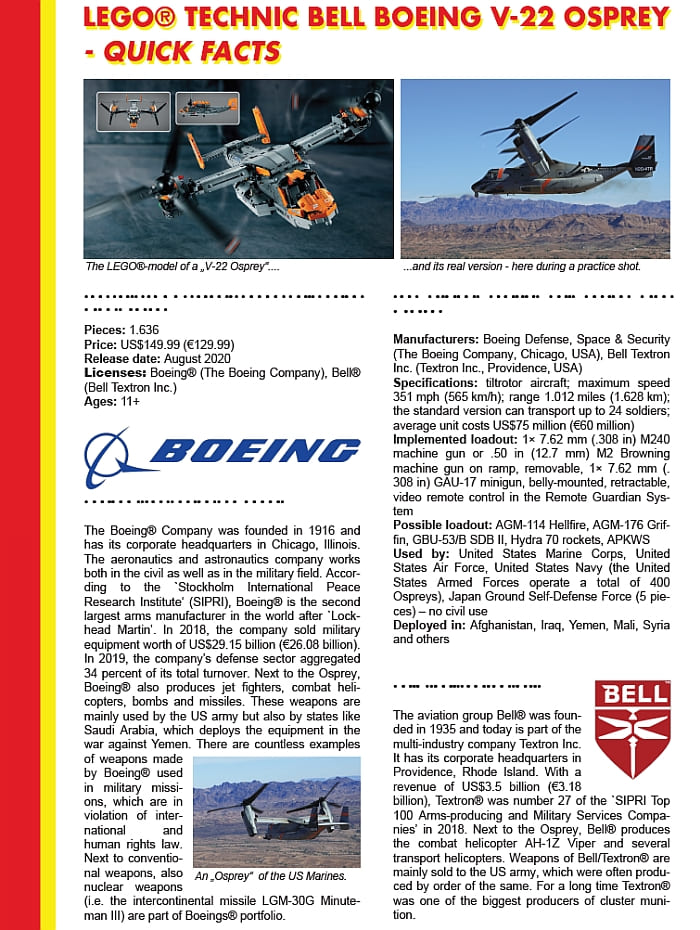 To start the campaign, the DFG-VK protested in front of the LEGO flagship store in Berlin, and they planned other protesting events as well. The DFG-VK remained hopeful that LEGO will eventually hear the criticism and cancel the set as well as reevaluate their internal rules. A summary of the petition as well as the study and other information can be found on the webpage: LoveBricks-HateWar.com. All this publicity started a backlash on social media, and LEGO could no longer ignore the concerns. They responded as follows.

The LEGO Technic Bell Boeing V-22 Osprey was designed to highlight the important role the aircraft plays in search and rescue efforts. While the set clearly depicts how a rescue version of the plane might look, the aircraft is only used by the military. We have a long-standing policy not to create sets which feature real military vehicles, so it has been decided not to proceed with the launch of this product. We appreciate that some fans who were looking forward to this set may be disappointed, but we believe it’s important to ensure that we uphold our brand values.

There are going to be some stores that have already received stock but official LEGO stores will not receive stock. Our sales teams have been in touch with their customers as well. I would expect a few mom and pop type shops to receive a shipment but larger retailers will be less likely.

Once the set was canceled, the German Peace Organization released a statement that they were surprised but delighted by LEGO’s swift response. Especially after being ignored for many months. Schulze von Glaßer stated that “Despite the previous bad communication on the part of LEGO, we are all the happier about the company’s admission and the consequence it has drawn from it – we understand that the decision was not easy. We hope that LEGO will hold on to its own good valued in the future.” With respect to the environment, the organization hopes that sets, which already have been produced, will not be destroyed so that the bricks can be used for future sets. “That is the good thing about LEGO, you can always create something new with them,” Schulze von Glaßer concluded. You can read the full response here. 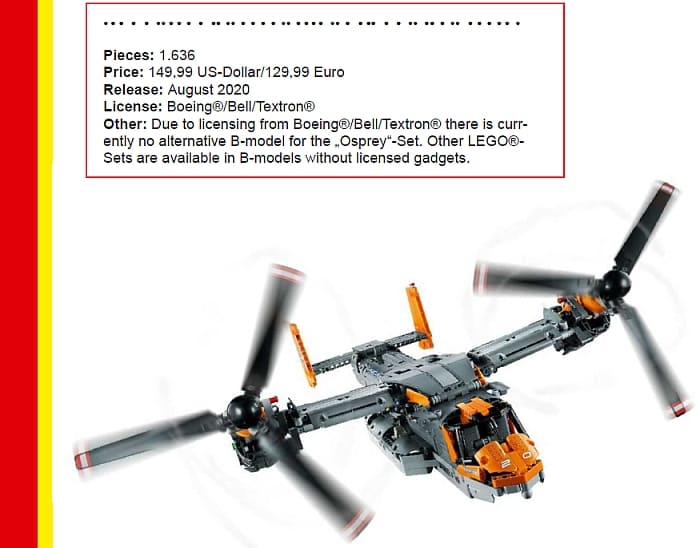 While many people praise LEGO for canceling the #42113 LEGO Technic Bell Boeing V-22 for the reasons raised by the German organization, others are upset that it won’t be released, or because it took LEGO this long to realize that this set should have never made it into production, or because LEGO bowed to pressure. An additional issue is that LEGO only canceled the set and didn’t recall it from vendors who already received them. This means the set is ripe for exploitation by resellers. In fact, it’s already happening. The originally $150 set is now selling on eBay in the $1,500-$2,000 range by those who were lucky enough to get it, and I wouldn’t be surprised if it will go even higher. Please note that the set is not available on BrickLink as it is now owned by LEGO, but you can find it on eBay and other marketplaces.

Extensive and intense discussion about the #42113 LEGO Technic Bell Boeing V-22 continues amongst LEGO fans on forums, blogs, social media, and the LEGO Ambassador forum. There are even petitions to release the set in spite of the possible backlash from vigilante organizations. It is not clear yet how LEGO will reuse the stock that’s already produced and still in their possession. They could release a similar rescue plane without the license, or reuse the parts for something else. It’s certainly a big blow to the company as making such a drastic turn at the last moment costs extra time, money, and manpower, in addition to lost effort that went into producing the set in the first place.

What do you think? Do you believe LEGO handled the situation properly, or would you have wished for a different outcome? How do you think they could repurpose the sets that are already produced? Feel free to share your thoughts and discuss in the comment section below!