by Thita (admin) on September 3, 2020
in Featured LEGO Creations

Although the #10273 LEGO Haunted House is technically a part of the LEGO Creator Fairground series, it is very different from the previous sets in both color and design. Rather than being an obvious fairground ride, it’s a drop tower hidden inside a haunted manor. The manor itself is a nicely detailed building, similar in size to the LEGO Modular Buildings collection. This inspired many LEGO fans to display the set along with the LEGO Modular Buildings, and even turn it into a regular LEGO Modular Building by removing sections of the tower and the mechanism of the drop ride, adding stackable floors, and transferring the whole building onto a 32×32-stud baseplate. 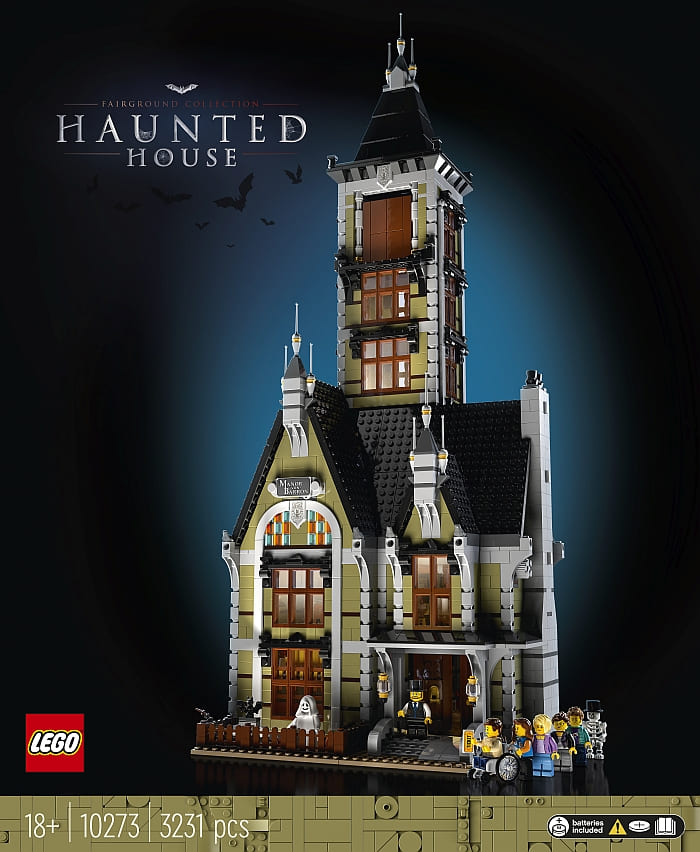 If you want to place the manor next to the other LEGO Modular Buildings but you also want to keep the drop tower and other play-features, you can just leave everything as is. The building opens like a dollhouse for play, but otherwise it’s fully enclosed, so you don’t have to worry about exposed interiors from any angle. The size of the building is very similar to the Modulars, and it will fit right in. The only quirky feature is the height of the tower, which you may or may not want to lower. 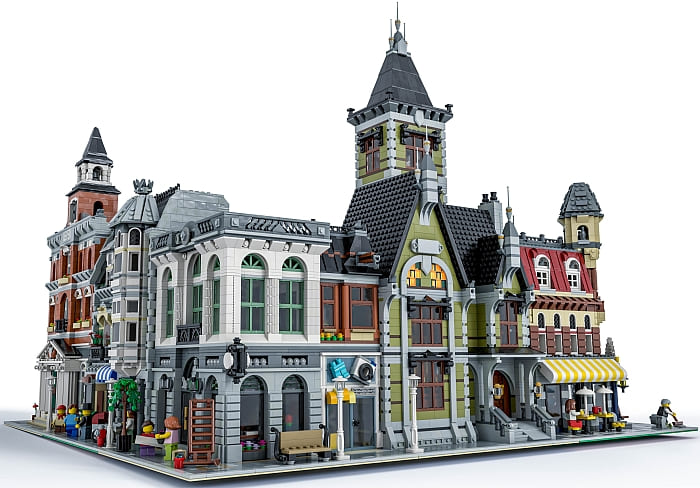 If you want to turn the #10273 LEGO Haunted House into an actual LEGO Modular Building, you have some work cut out for you. While the manor is seemingly similar to the LEGO Modular Buildings, there are also many differences to consider. The building is on a 32×32 base, but it’s made of plates. They will have to be swapped out to a standard 32×32 baseplate. This is easy to do.

Although the manor is 32 studs wide, due to the hinges at the sides, it can’t sit flush next to other buildings. You will want to remove the hinges anyway as you don’t need them for regular floors. You might also consider removing or modifying the chimney and some of the decorative elements on the right to bring the building all the way to the edge of the baseplate.

Another section that will need to be modified is the tower. It’s too tall as it comes in the set, and it has quite a bit of complicated mechanism to make the drop ride work. Fortunately, the architecture is standard and with repeating sections, so once you gut it out and lower it, you will end up with a nice tower.

The real big job is going to be on the inside of the main building. In the original set, there are no real floors, furnishing, or steps to move from floor to floor, so you will have to install all of these features yourself. And you also have to figure out what you would like to put inside the building. Perhaps, you would want to turn it into a regular residence, or a museum, or a church, or an antique shop. There are lots of options. As the building looks old, you could even keep some of the haunted features for a bit of spookiness.

If you already have a good number of extra pieces, you can start working on modifications right away. If you are short on loose bricks, you may want to design the interior digitally with LEGO Digital Designer or Stud.io before purchasing the additional pieces you need. 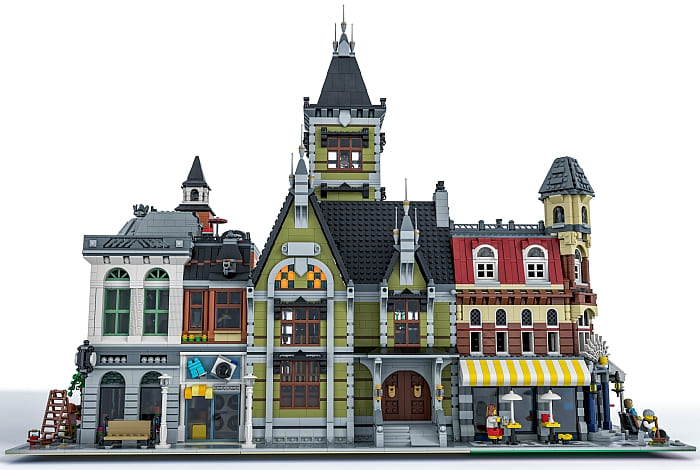 If you feel intimidated by all of this, but you still want to turn the Haunted House into a Modular, you can also check out some of the alterations others have done. One of my favorites is the Old Mansion by LEGO fan Das_Felixe (see pictures in this article). His model includes all the modifications we just talked about, like a standard Modular Building street section and base, standard stackable and fully furnished floors, staircases, and more. The interior modifications include a sofa corner, furnace, and organ (from the original set) on the ground floor, a kitchen and dining room on the second floor, and a bedroom on the third floor under the roof. 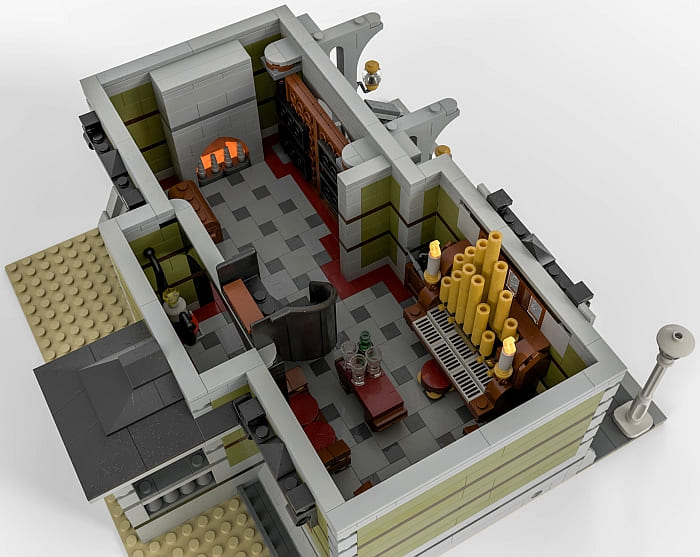 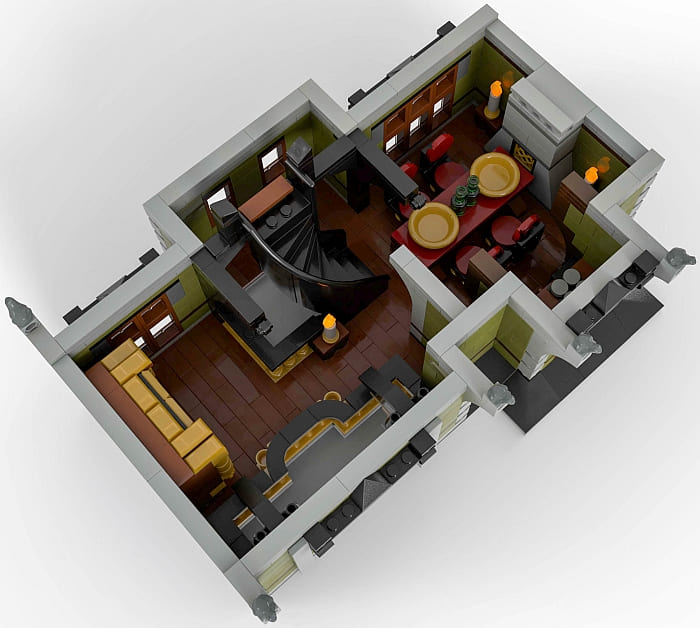 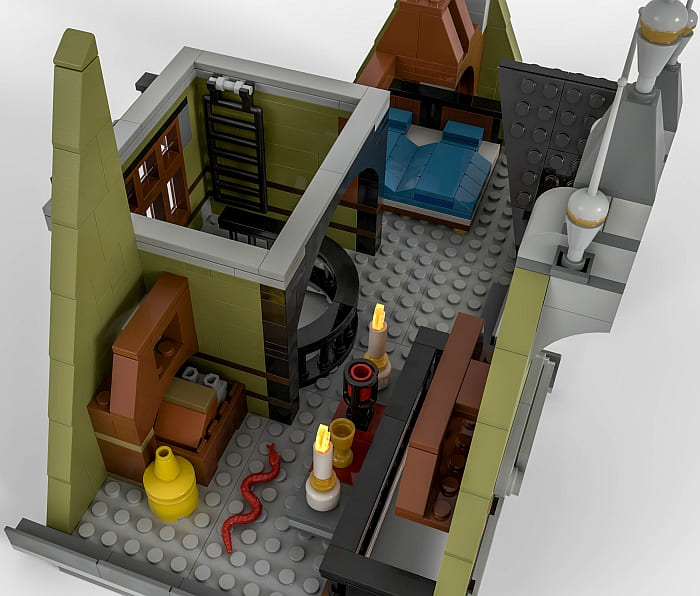 The design of the Old Mansion utilizes as much of the original pieces from the set as possible, but since it follows an entirely different building concept for the interior and some of the exterior, it still needs approximately 1,400 additional pieces. A good number of these are tiles to cover the street as well as two of the floors. You could make some adjustment with the extra pieces depending on what you have already, and how much of the custom design you want to follow. The parts-list for the extra parts needed to build the Old Mention and the instructions are available on Rebrickable. The parts-list is available for anyone to look through, and the downloadable building instructions are available for €8.00. You can find both at Rebrickable: LEGO OLD MANSION – HAUNTED HOUSE MODULAR MODIFICATION 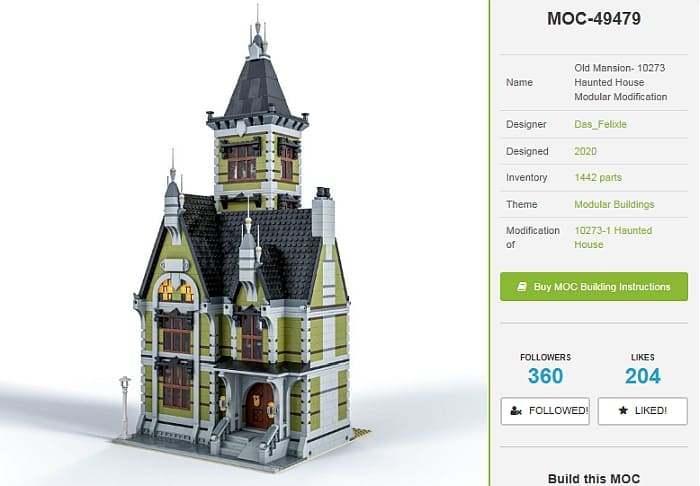 I’m still waiting for my #10273 LEGO Haunted House as it’s been on backorder for quite some time, but once I receive it I plan to work with Das_Felixe’s modifications as well as some of my own ideas. If you don’t have the set but you would like to get it, it’s available on backorder with a mid-September shipping date at the LEGO Creator section of the Online LEGO Shop. 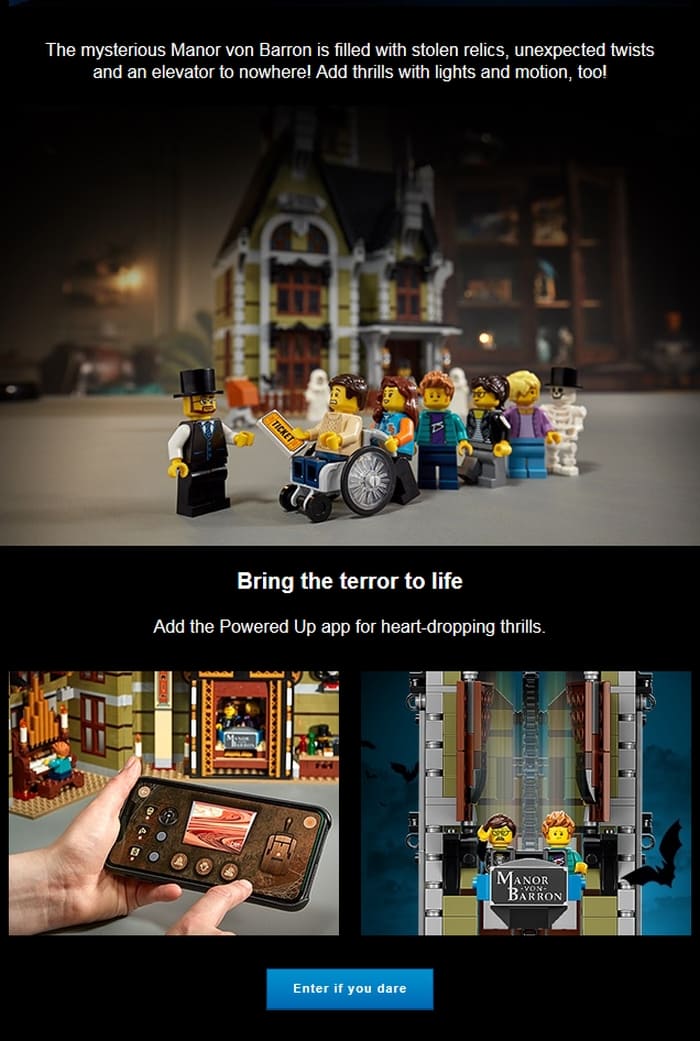 What do you think? Do you have the LEGO Haunted House already? Have you modified it in any way? What modifications have you done? Or do you like it as it is? Feel free to share your thoughts and discuss in the comment section below!