In the first part of our review of the recently released #75978 LEGO Harry Potter Diagon Alley set, we focused on what’s in the box, including instructions, stickers, parts, minifigs, rarities, and more. In the second part of our review, we talked about each of the four structures in detail. And today, we will discuss display options and compatibility with the LEGO Modular Buildings series.

The #75978 LEGO Harry Potter Diagon Alley set was designed in such a way that it has several display options on its own. Each of the four buildings is built on a 32×16 stud baseplate, and each of the buildings have LEGO Technic bricks with holes and pins to connect them both at the sides and the back. The building instructions for Diagon Alley suggest two layout possibilities; one is to line up the buildings in a long row, and the other is to place the buildings back to back.

When you place the buildings in a row, you will get a layout that is 11” (29cm) high, 40” (102cm) long, and 5” (13cm) deep. This equals the length of four standard size LEGO Modular Buildings with half the depth. To display them this way, you will need a shelf that’s a bit over a meter long. Note that the four buildings can be displayed in any order. I believe LEGO designers used the layout of Ollivanders/Scribbulus, Quidditch Supplies/Daily Prophet, ice cream parlor/bookstore, and the Weasley brothers’ joke shop in that order as to alternate the light and dark color-schemes. However, you can align the buildings in another order and they line up just as nice.

The other layout suggested in the instruction book is to place Ollivanders/Scribbulus and the Weasley brothers’ joke shop back to back, and do the same with Quidditch Supplies/Daily Prophet and the ice cream parlor/bookstore. The set was designed in such a way that when you place the buildings this way, the roofs line up perfectly. Now, you have a layout that equals two standard LEGO Modular Buildings on all sides. This will work well for those who have a display that’s open on all sides, however if your layout is pushed against a wall, you won’t be able to see some of the storefronts. Also, if you put the buildings back to back, the interiors of the buildings will be kind of chaotic, as the shop will flow into each other, and you won’t be able to access them the same way as the Modular Buildings with removable floors. 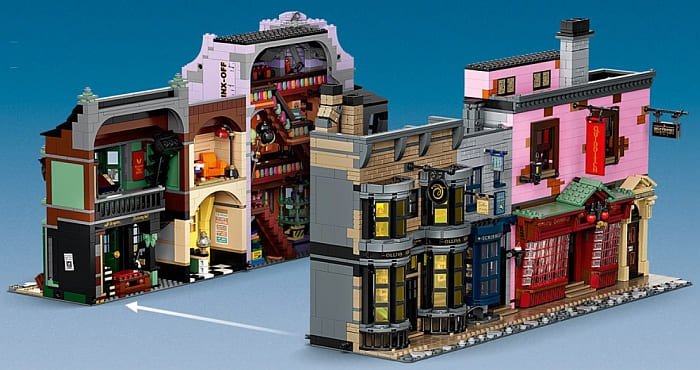 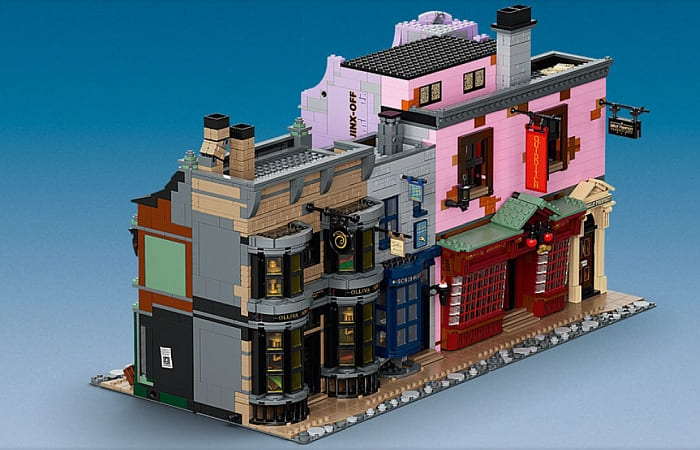 Although this is not mentioned in the instructions, another way to display the buildings is in an L-shape. The joke shop is actually a corner building, so you can attach the other buildings to it not just facing the front, but perpendicular to the front. There is the entrance of Knockturn Alley, which you may want to remove in this configuration, or you may just leave it on as an interesting element. 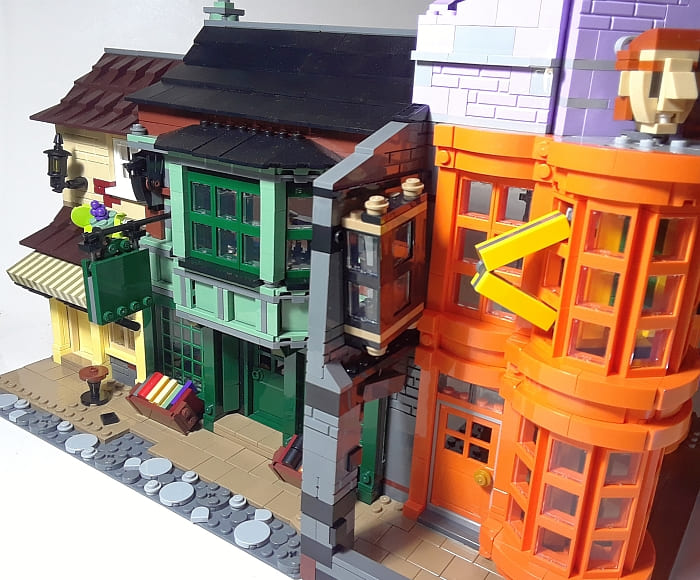 Yet another layout is to place two buildings on each side facing each other, as you can see on the image below by French LEGO fan hello.bricks. The cobblestone street and the sidewalk is designed in such a way that they perfectly match up in this configuration, although this is not demonstrated in the instruction books. This layout is not very practical for a permanent display, but it is excellent for photography. The storefronts facing each other on a narrow street create that cozy and cramped feeling Diagon Alley is known for. You can take some really great shots from this angle either with the street empty, or populated with minifigs. 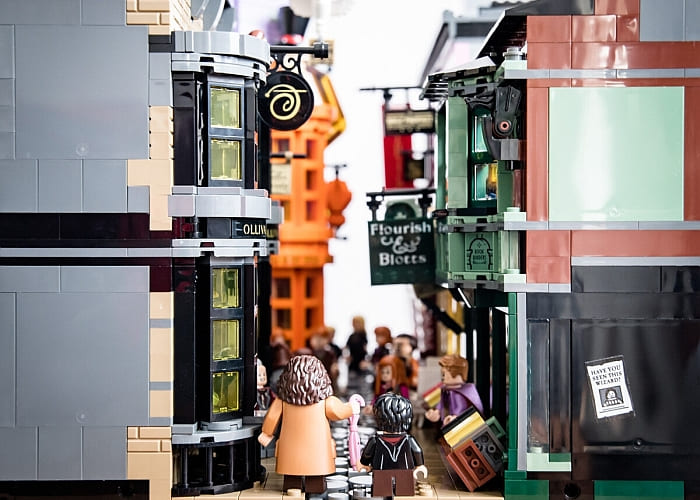 The LEGO Diagon Alley set is a full street in itself, and you can have plenty of fun displaying it in any of the configurations mentioned above. And if you like you can add your own custom buildings to it as well. In addition, as the buildings are so close in size and style to the LEGO Modular Buildings, it’s natural that people want to know if they can display them together.

As mentioned above, while the buildings in Diagon Alley are the same width as the LEGO Modular Buildings, they are half the depth. So, if you want to make them fully compatible with the Modulars, you will need to place them back to back, or build up the back sections of each to make them into full buildings. And you will need to reconfigure the floors to be removable like the Modulars. 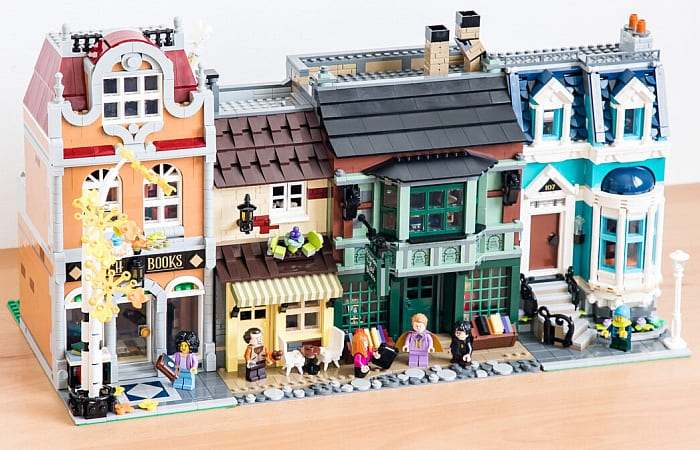 Another thing to consider is that the buildings of Diagon Alley aren’t very tall. The tallest two (Quidditch Supplies and the joke shop barely reach the height of the #10218 LEGO Modular Pet Shop, and the shorter buildings are the height of the already very short apartment in the #10270 LEGO Modular Bookshop. They do look good together as evidenced by the picture above by hello.bricks, but just know that they will be some of the shortest buildings of your Modular street. You might consider making the floors of the Diagon Alley shops a bit taller, or even adding a whole other story to them. The image below with LEGO designer Marcos Bessa and a larger prototype building in the background may give you some ideas. 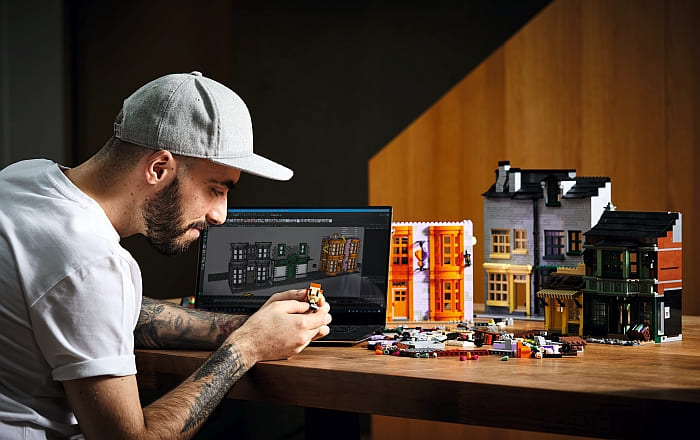 All of these modifications can be done, of course, but just wanted to let you know what you’re getting yourself info if you want to make the Diagon Alley shops fully compatible with the LEGO Modular Buildings. I think it’s worth exploring these ideas, as the buildings have great potential as fully functional Modulars. If you are considering a project like this, but you don’t feel confident that you can do it alone, I would suggest that you wait a bit. I know several LEGO fans who are working on converting Diagon Alley to Modulars and are planning to share instructions at Rebrickable and the various Modular-related fan groups on Facebook. And I will leave one more picture here for you, also by hello.bricks. If you feel adventurous, you can even stack Diagon Alley! 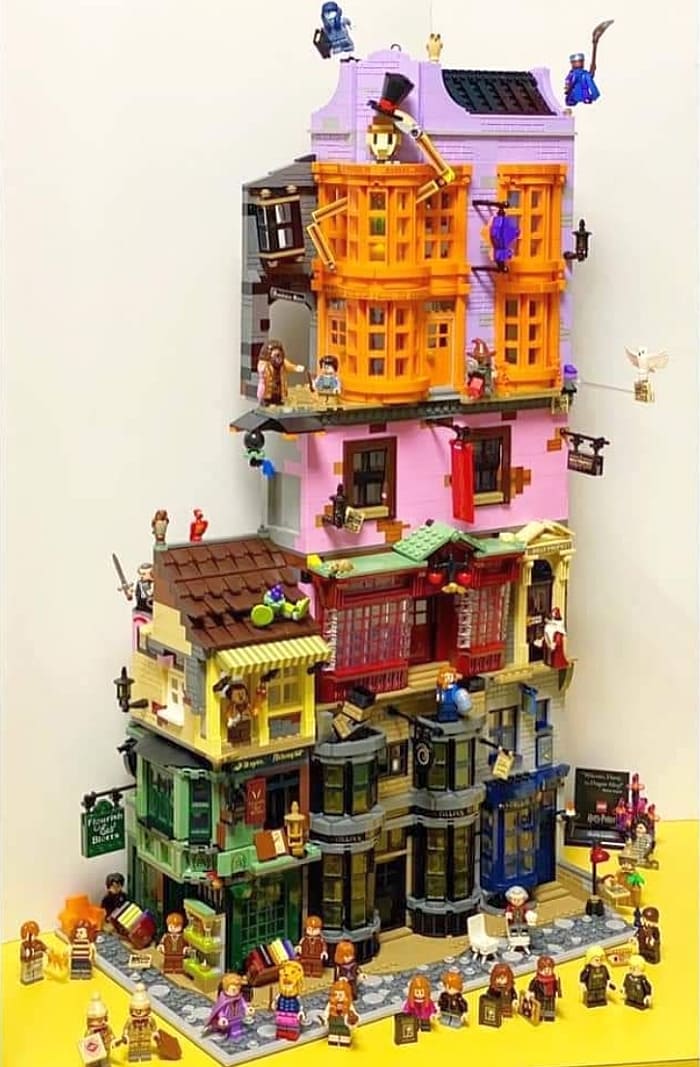 If you don’t have the #75978 LEGO Harry Potter Diagon Alley set yet, but you would like to play around with it and explore the various display options, it’s available at the LEGO Harry Potter section of the Online LEGO Shop. 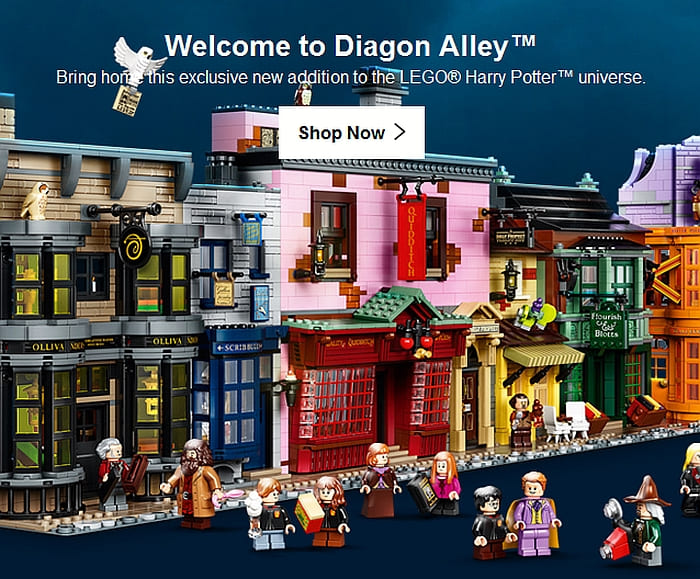 What do you think? How do you like the LEGO Diagon Alley set? Are you planning to get it? Or do you have it already? Feel free to share your thoughts and own reviews in the comment section below!