by Thita (admin) on December 15, 2020
in Featured LEGO Creations

We can’t have Christmas without LEGO fan Jason Allemann (JKBrickWorks) giving us an awesome Christmas-themed LEGO kinetic sculpture, can we? And Jason doesn’t just show us cool models, but also provides free building instructions. This year, Jason shares instructions for two models; one brand new, and the other for last year’s model. 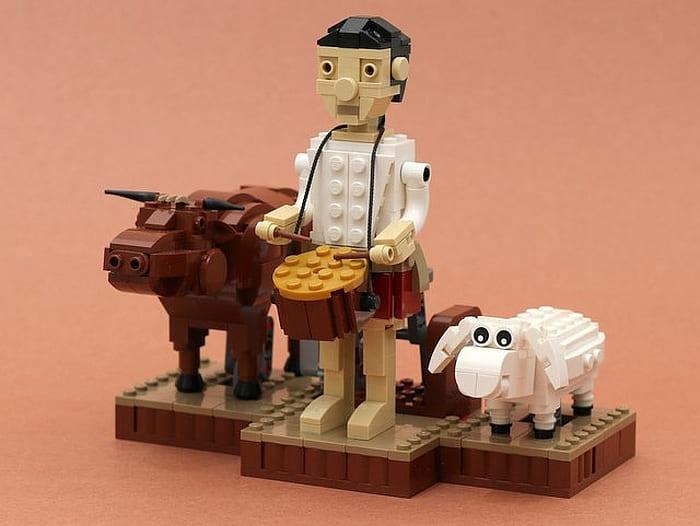 As you might remember, last year Jason motorized Santa’s sleigh pulled by four reindeer from the #10245 LEGO Santa’s Workshop set so it looks like Santa’s sleigh was flying through the sky. However, he did not have time to finish the building instructions until now. The flying Santa’s sleigh is built on the same concept as one of Jason’s other kinetic models, Pursuit of Flight. Both models can be hand-cranked or motorized using standard LEGO Power Functions/Powered Up components. Below, I have included the video demonstration of the flying Santa’s sleigh in case you haven’t seen it yet, and if you would like to download the parts-list and building instructions, you can get them from Jason’s website: PURSUIT OF CHRISTMAS INSTRUCTIONS

For this year, Jason built another awesome kinetic model; the little drummer boy. The model features the little drummer boy performing a basic drum beat on his drum, with a cute lamb and ox beside him, bobbing their heads to keep time with the beat. The model is modular in nature, so you can also build just the boy, or either of the animals on their own. Jason notes that if you do plan to put all three together, you get the best results if during the final assembly the animals’ heads are in their lowest position (they should naturally be in this position), and the boy has both arms in the down position (the pair of LEGO Technic lift-arms in the back are both pushing the control arms up). This will result in the animals bobbing their heads in time to the drumbeat nicely. You can see the model in action, along with a detailed explanation of how it works, in the video below. The parts-list and building instructions can be found at Jason’s website: LITTLE DRUMMER BOY INSTRUCTIONS (Please note that the building instructions are for the basic hand-cranked version shown in the video, but the model can be motorized as well using LEGO Power Functions/Powered Up components.)

What do you think? How do you like these Christmas-themed LEGO kinetic sculptures? Are you planning to build either of them? Feel free to share and discuss in the comment section below!