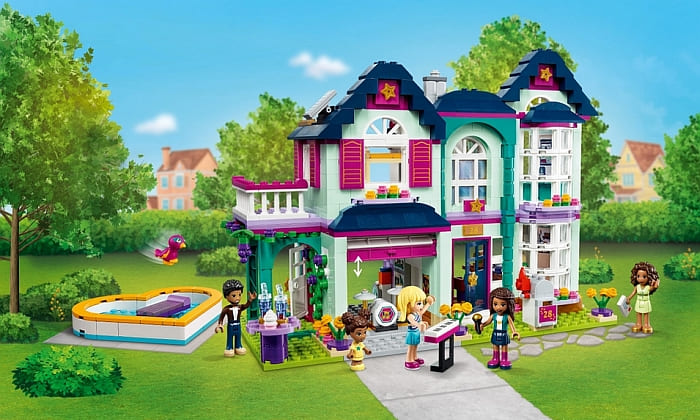 Although the styles of the houses are different, they all follow a similar pattern; an attractively detailed exterior facing the front, an open back to facilitate play, and removable floors for accessibility. The interiors are packed with nicely detailed furniture pieces, appliances, and a large number of accessories. These sets also feature the parents of the girls, and in the case of Andrea, even a younger sibling. 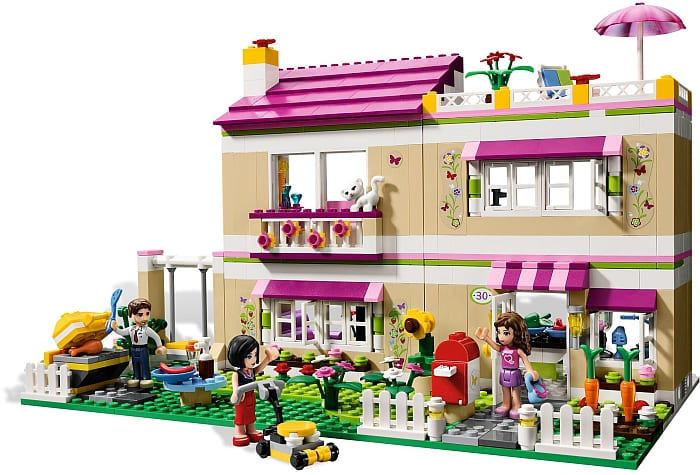 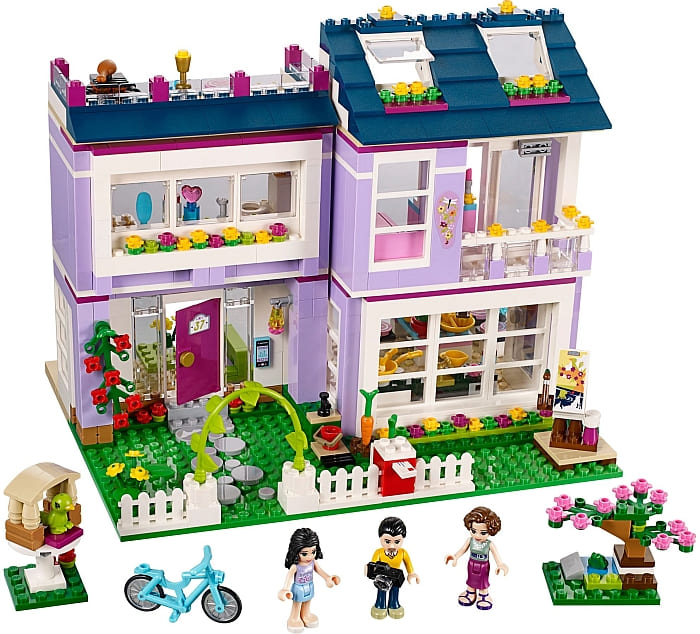 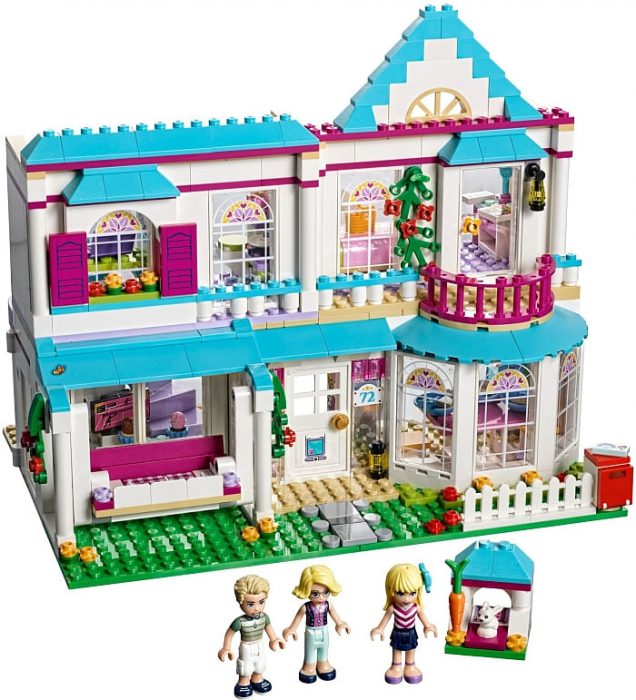 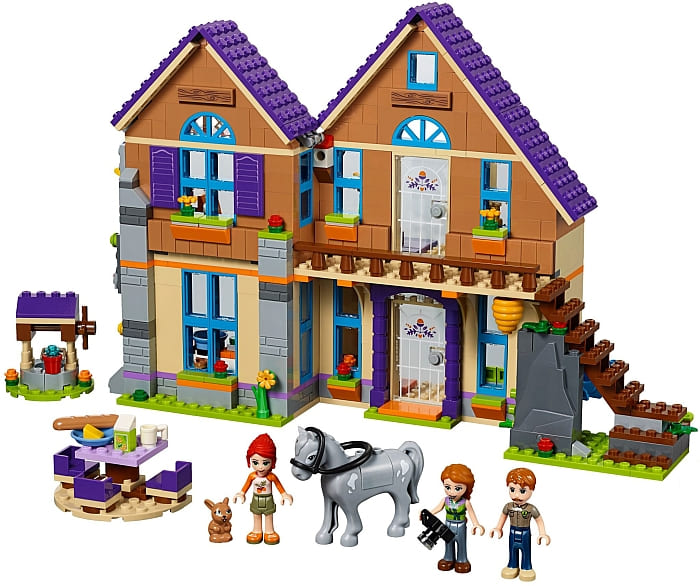 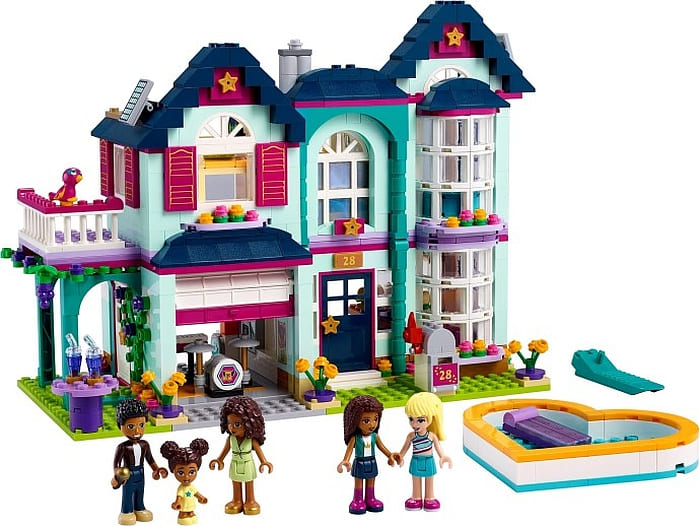 When #41449 LEGO Friends Andrea’s Family House was first revealed, it immediately reminded me of a Mega Bloks American Girl set released back in 2016, called Grace’s Home. I found that set very attractive with its light-aqua walls, white arched windows, and nicely detailed interior. I was hoping that LEGO will release a building with a similar style and color-scheme, so I was really happy to see #41449 LEGO Friends Andrea’s Family House. (If you’re interested, the Mega Bloks set is still available on Amazon. Here is the link: Mega Bloks American’ Girl Grace’s 2-in-1 Buildable Home. It’s not cheap, but it comes with some very nice LEGO-compatible elements and accessories.) 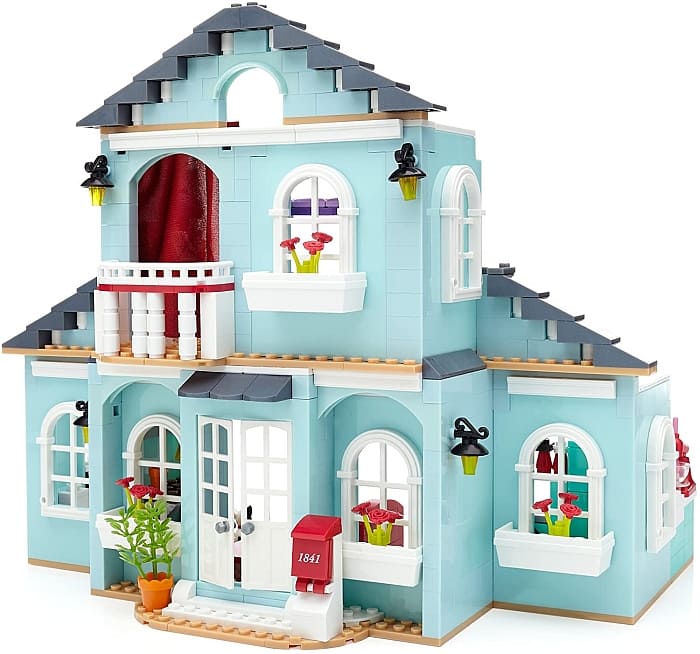 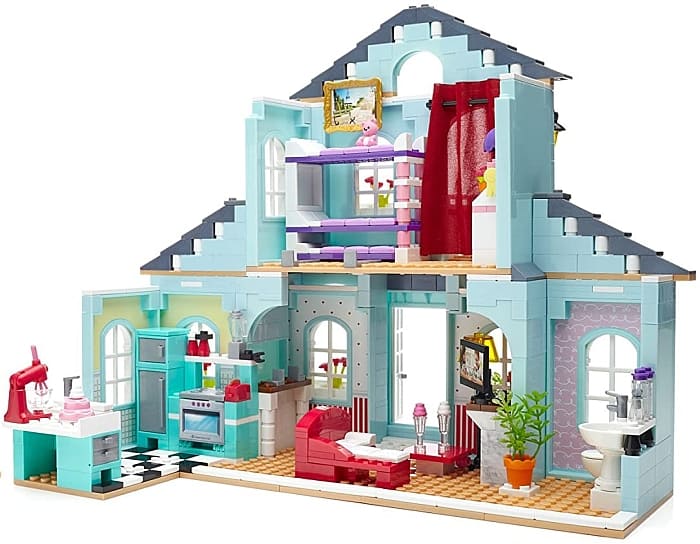 The #41449 LEGO Friends Andrea’s Family House comes with 801 pieces separated into 9 numbered bags, a fairly large sticker-sheet with 32 stickers, and an 200-page instruction book. The price is $69.99 which is excellent for a set with so much play-value and so many rare and exclusive parts. 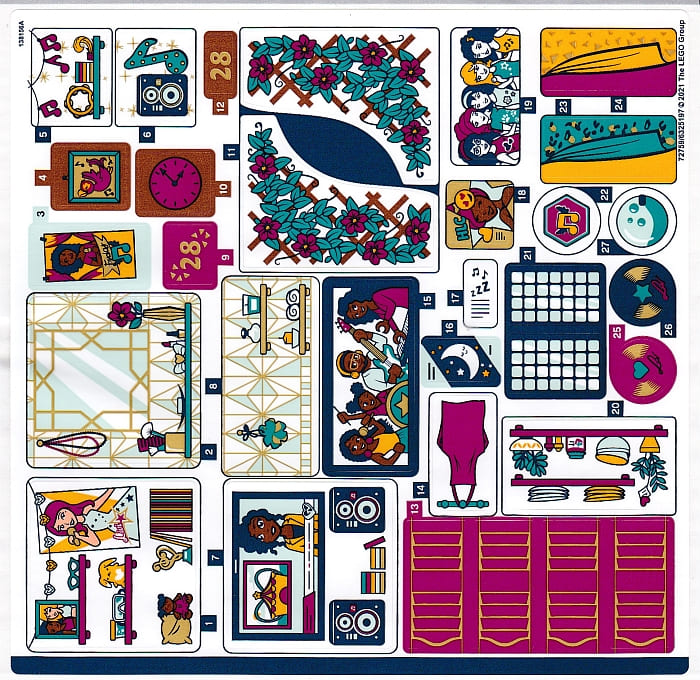 Construction begins with a separate heart-shaped pool. The rest of the parts are for building the house. The bottom floor features the kitchen and dining room, as well as the garage converted into a music studio for Andrea and her friends. There is also a small grapevine covered archway on the left under the second floor balcony. 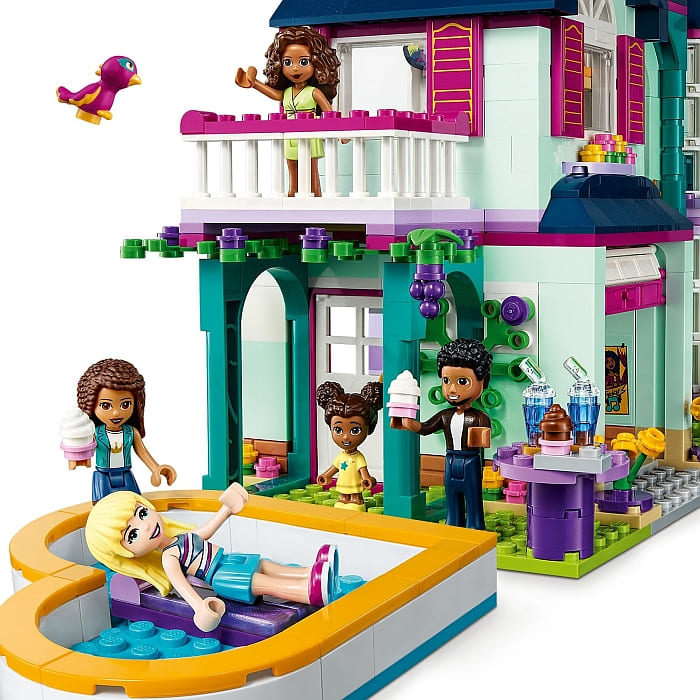 The removable second floor features the Andrea’s parents bedroom, the kids bedroom, with a bathroom in between. While this set is not on the level of the LEGO Modular Buildings, it has a well thought out floor plan with enough room for everything. And whatever could not be built from bricks is suggested by stickers. 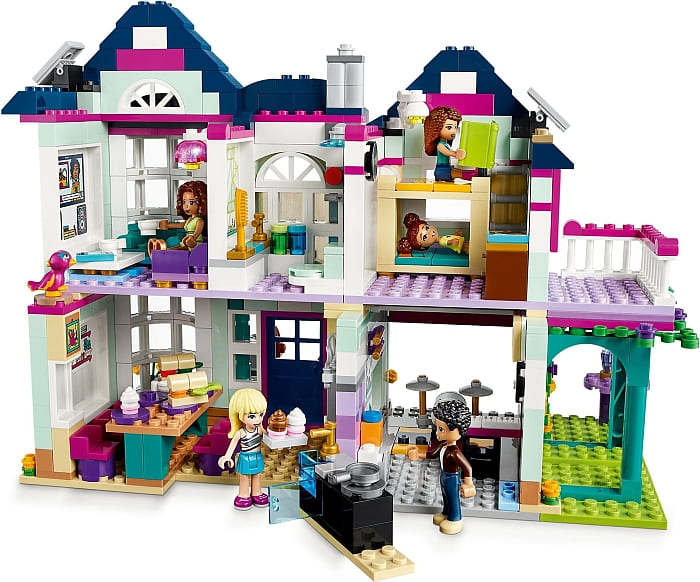 LEGO Friends sets always come with nicely designed furniture pieces and appliances. One of my favorite details in this set is the coin piece hidden in the couch cushions. Little details like that makes the building LEGO friends sets a truly joyful experience. 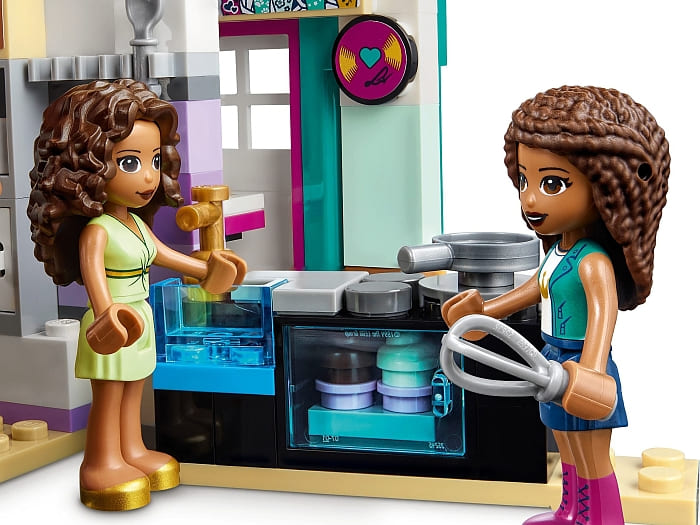 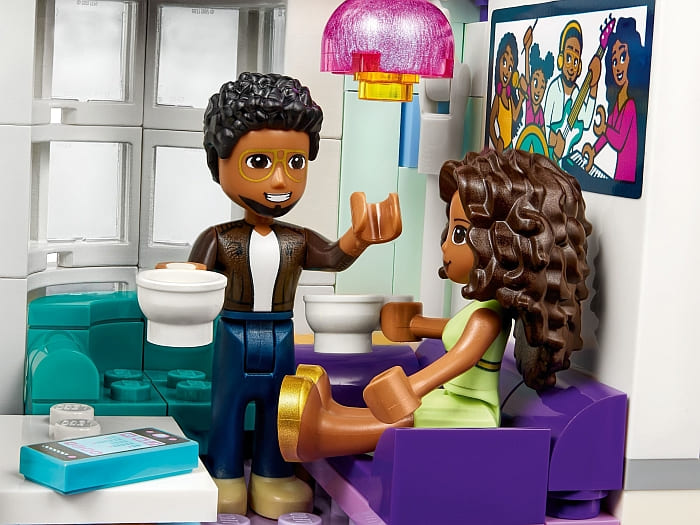 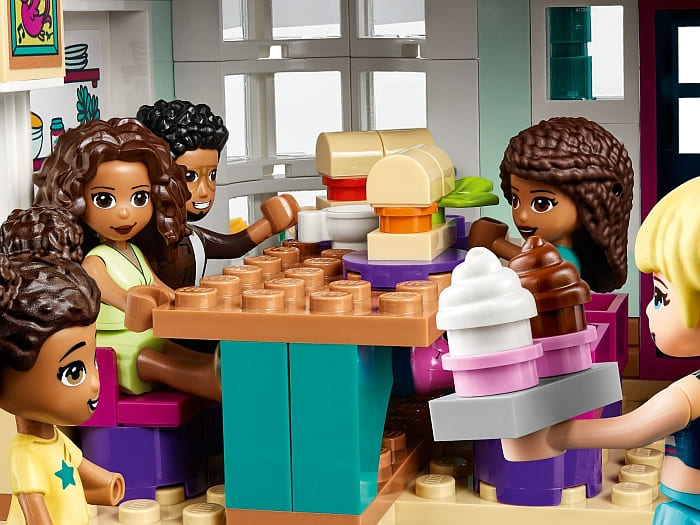 An outstanding feature of this set is the bay windows utilizing the new rounded window elements The piece only appears in this set (you get 12 of them) and 4 in the #41447 LEGO Friends Heartlake City Park we talked about recently (see links at the end of this post). Utilizing this piece is the easiest and most straightforward way to build bay windows. 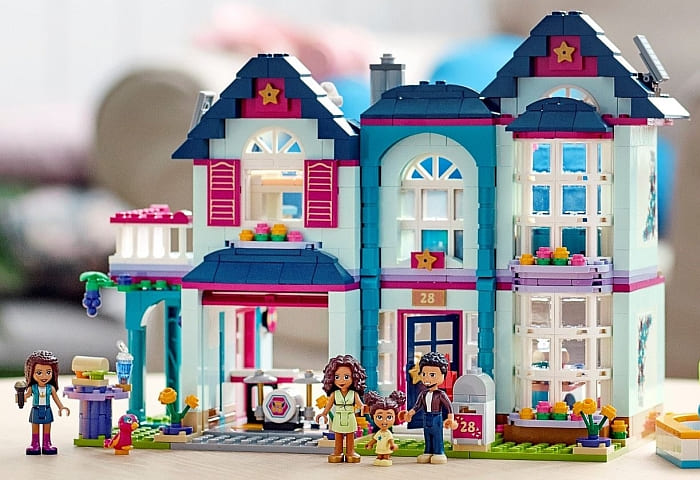 The arched windows over the front entrance and the garage door are also very nice. In fact, I like how the whole architecture comes together at the front. And the colors come together nicely as well.

Another unique feature of this set is the extensive usage of a still fairly rare color, light-aqua. You get thirty-one 1×2 bricks, fifteen 1×4 bricks, nine 1×1 bricks, three arches, and several other pieces in this beautiful color. Some of the other prominent colors are dark-turquoise, dark-blue, and magenta.

The set comes with four mini-dolls; Andrea, her parents Martin and Donna, and Andrea’s friend, Stephanie. The cute little micro-doll is Andrea’s little sister, Liz. Stephanie is the only one who is not exclusive to this set. Andrea’s parents and little sister are new, and even Andrea gets a new outfit.

The #41449 LEGO Friends Andrea’s Family House measures over 7 in. (20 cm) high, 10 in. (26 cm) wide, and 4 in. (12 cm) deep. For those who prefer measurements in studs, it’s 32 studs wide and 16 studs deep. As the front is already as wide as most of the LEGO Modular Buildings, and it’s quite nicely detailed, I don’t think it would take too much effort to make it fully compatible with the Modulars – if that’s something you wish to do. And if you collect the LEGO Friends houses, now you can finally complete the neighborhood with a house for each of the five friends.

Overall, I’m very happy the #41449 LEGO Friends Andrea’s Family House. The architecture and colors are pleasing, the garage studio is a nice touch, and all the living spaces are well done. I also really like the outfits of the mini-dolls. And of course, little Liz is irresistibly cute. The only negative I can think of is that I feel the pool is kind of an unnecessary add-on that doesn’t add much value to the set. But other than that I believe this set is worth getting for the building experience, the play-value, and the parts selection as well. If you want to take a look, it’s available at the LEGO Friends section of the Online LEGO Shop.

What do you think? How do you like the LEGO Friends houses? Do you have any of them? Which one is your favorite? And what do you think of Andrea’s House? Feel free to share your thoughts and own reviews in the comment section below!