Like many others, I’m a big fan of the NASA-related LEGO space-exploration sets. The #21104 LEGO NASA Mars Science Laboratory was a short-lived set released in 2014 that I missed out on and would still like to get. The #21309 LEGO NASA Apollo Saturn V from 2017 was an amazing building experience and it looks great on display (this set was re-released as the #92175 LEGO NASA Apollo Saturn V in 2020 and is still available at the LEGO Ideas section of the Online LEGO Shop). The #21312 LEGO Women of NASA highlighted important people in NASA’s history. The #10266 LEGO NASA Apollo 11 Lunar Lander from 2019, and the #21321 LEGO International Space Station from 2020 are two other excellent sets that are a pleasure to build and are educational as well. Thus, I was very excited when LEGO announced the #10283 LEGO NASA Space Shuttle Discovery set, the latest set made in collaboration between LEGO and NASA. 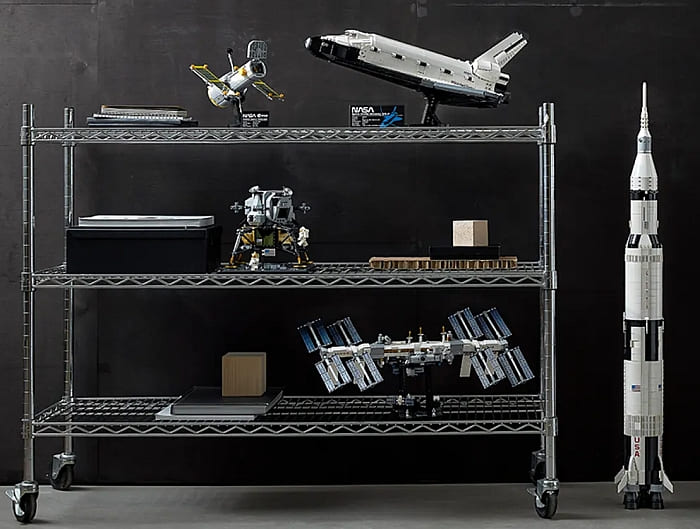 The #10283 LEGO NASA Space Shuttle Discovery set was released in April, so I’m a little late with this review, but I like to take my time with space exploration sets. The building instructions are full of educational materials and little tidbits that prompt me to do further research and take the building process slower than usual. These sets are not just great building experiences, but also remind us of the brilliant innovators, hard working scientists, and brave explorers reaching new frontiers. 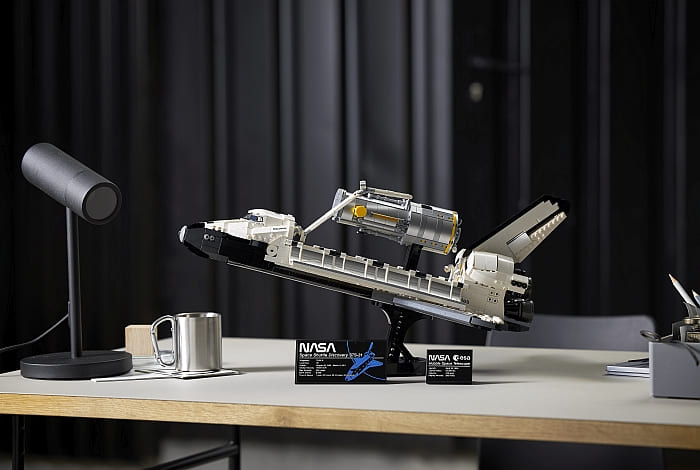 The instruction book is 320 pages long, and starts out with information about the five space shuttles that make up NASA’s Space Exploration System (STS) fleet (including the Discovery), as well as the Hubble Space Telescope. There is also information about the LEGO designers who worked on this set. Extra tidbits are sprinkled around the instruction pages, which makes the building process more engaging. 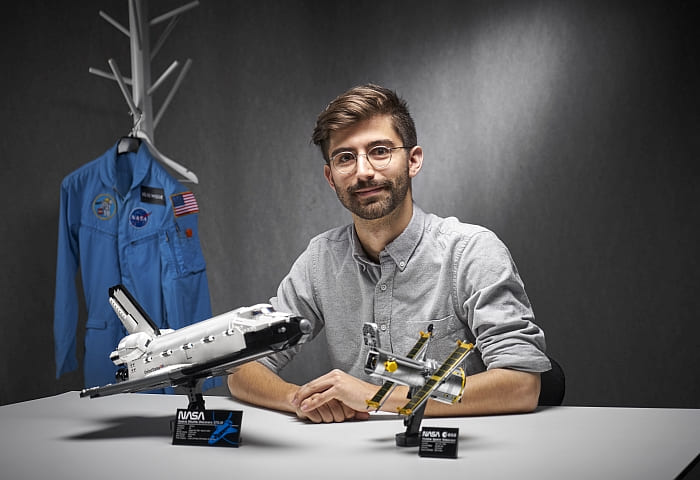 The first part of the set that you are instructed to build is the Hubble Space Telescope from bags numbered 1-3. You also build the display stand and information plaque for the telescope. In my opinion, this is the most impressive part of the entire set. The silver pieces and gold foils make the model look high class and very realistic. Although the foils can’t roll up when the Hubble is carried by the shuttle, they can be replaced by golden rods (also included) as a realistic representation. 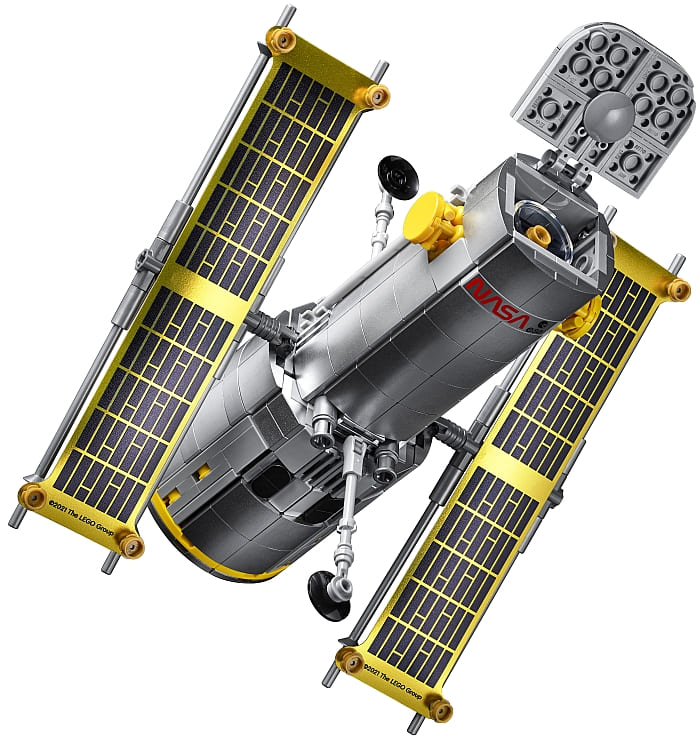 The shuttle itself as well as its stand and plaque are built from the rest of the bags (numbered 4-16). The model is full of interesting building techniques and constructing it never gets dull. Well, at least not until you have to apply the silver stickers on the inside of the payload bay. Applying so many stickers and trying to align them properly can be nerve wrecking. And silver stickers are especially prone to creasing and capturing fingerprints. I highly recommend using the soapy water method, as it is the most forgiving and the best way to properly align stickers. Carefully lift off each sticker from the backing paper with a hobby knife. (Try not to touch the face of the sticker with your fingers or crease them while lifting off.) Then apply a thin film of soapy water at the back of the sticker with your finger before placing it on the LEGO piece. The soapy water will give you a few minutes to slide the sticker around to its final position. (Even with this method, expect that you will most likely spend 30-60 minutes just applying stickers.) 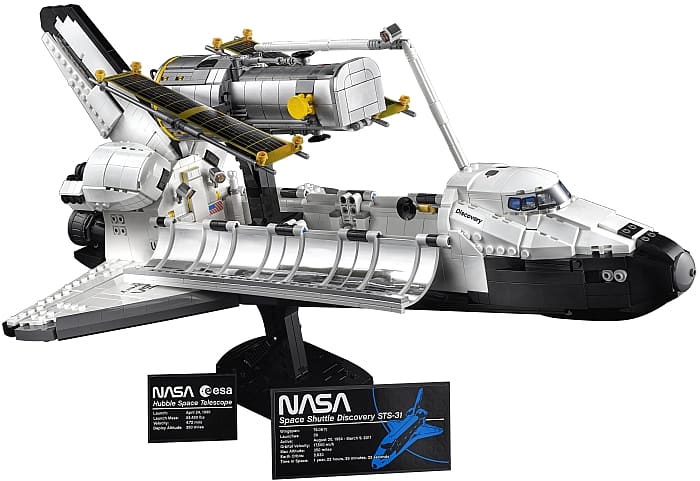 The shape of the shuttle reminds me of the LEGO Classic Space Galaxy Explorer, as well as Benny’s Spaceship, and other classic space sets. It’s a wonderful and nostalgic building experience for LEGO space fans. 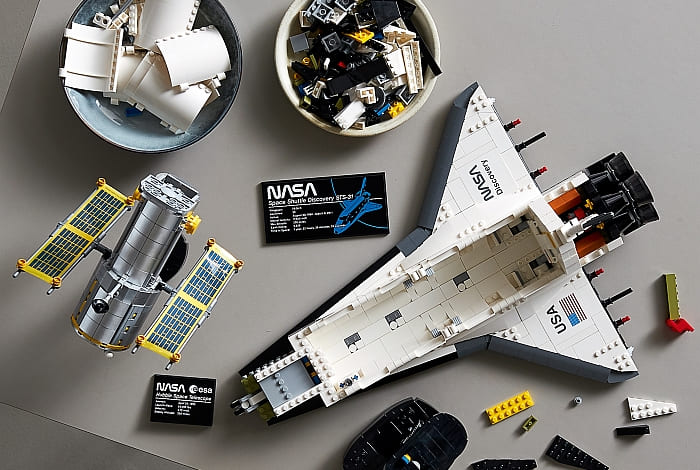 There are also some functional play features like the opening payload bay where you can store the Hubble Telescope (which comes with movable solar panels and opening aperture door), adjustable elevons, folding landing gear, and movable robotic arm. In addition, the cockpit opens to reveal flight and mid-decks with seats for five crew members. 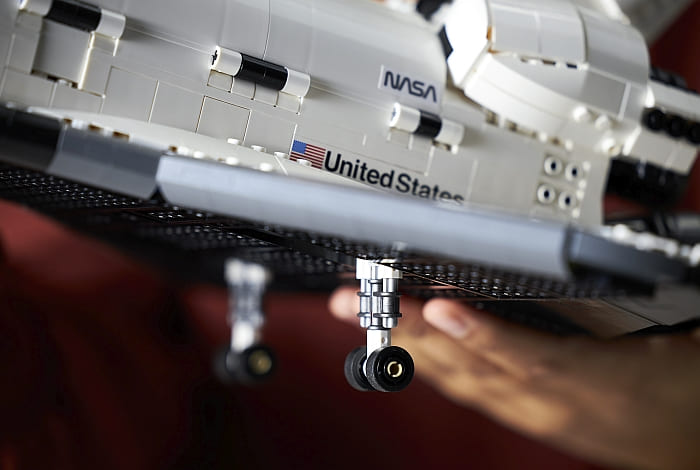 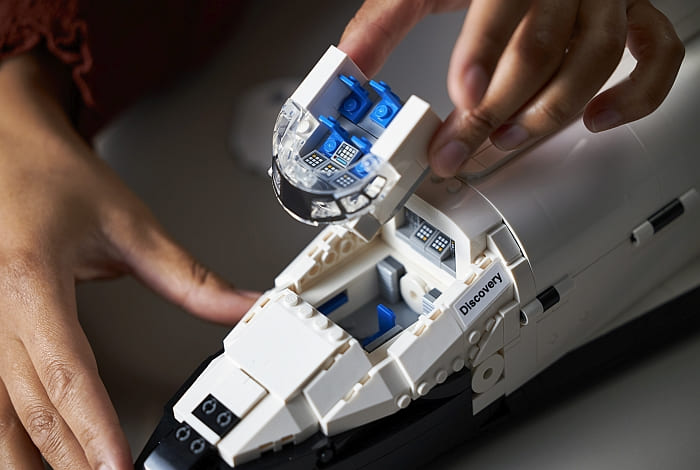 Besides the tedious stickers, the only other negative I can say about this set is that I feel the nose section is not as smooth as it should be. It looks better from certain angles and from a distance, but it feels broken up when you look at it closely. Perhaps in the future LEGO will make a piece that will help smooth out this section, but with the currently available pieces, this is the best that could have been done.

Perhaps another negative that could be mentioned is that the booster rockets aren’t included. I always liked the contrast of the orange boosters against the black and white of the shuttle. Perhaps LEGO felt that the set would have been too expensive with the boosters, and they don’t really add munch besides the color contrast. They are basically just hollow tubes to store fuel, so building them wouldn’t be particularly interesting. 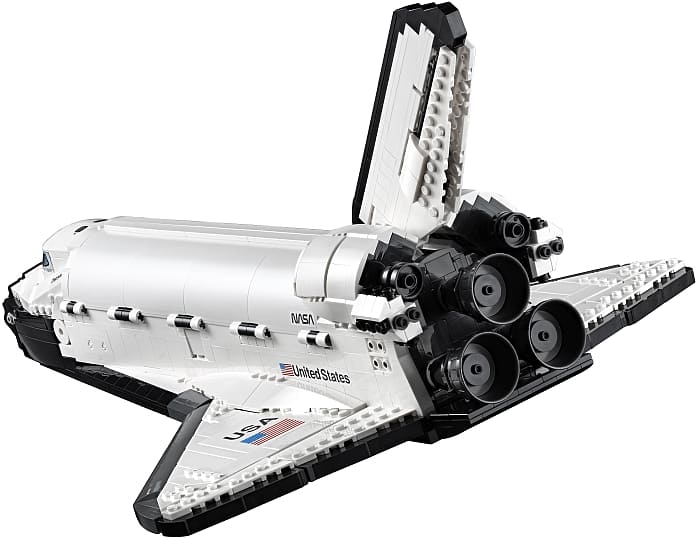 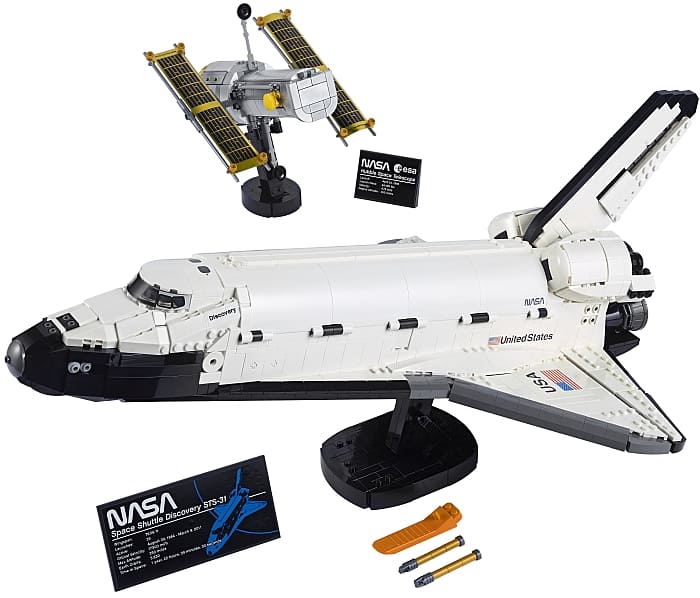 Below, I have included two video-reviews that I found valuable. The first one is by Tiago Catarino, a former LEGO designer, and big fan of space sets. And the second one is by JANGBRiCKS who is known for high quality and detailed reviews. They should help you decide if this is a set you would like to add to your collection.

If you like the #10283 LEGO NASA Space Shuttle Discovery set, or some of the LEGO space exploration sets developed in collaboration with NASA, like the #92175 LEGO NASA Apollo Saturn V, the #10266 LEGO NASA Apollo 11 Lunar Lander, and the #21321 LEGO International Space Station, visit the LEGO Ideas and LEGO Creator Expert section of the Online LEGO Shop. 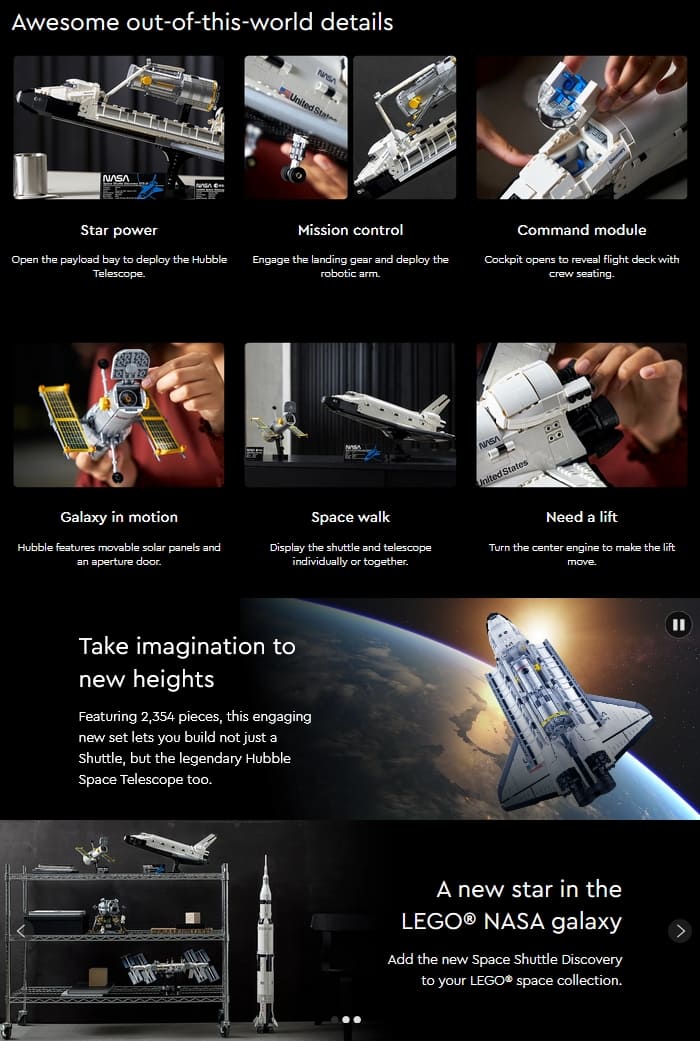 What do you think? How do you like the LEGO Space Shuttle Discovery set? And how do you like the other NASA-inspired sets? Do you have any of them already? Which one is your favorite? Feel free to share your thoughts and discuss in the comment section below!