The LEGO Foundation recently announced that they are going to donate brick-built LEGO MRI Scanners to hospitals globally. Radiology departments worldwide are encouraged to apply. Details below. 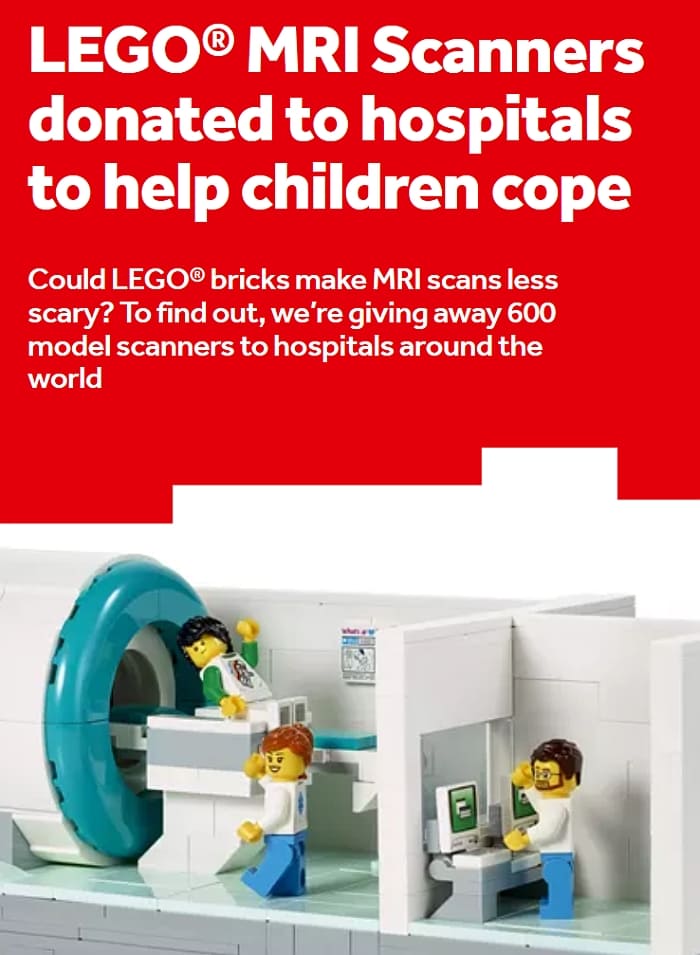 The LEGO Foundation has announced it will donate 600 LEGO MRI Scanners to hospitals worldwide to help children cope with the uncertainty of having a Magnetic Resonance Imaging (MRI) scan. The LEGO Foundation shares the mission of the LEGO Group: to inspire and develop the builders of tomorrow. The Foundation is dedicated to building a future in which learning through play empowers children to become creative, engaged, lifelong learners. Its work is about re-defining play and re-imagining learning. In collaboration with thought leaders, influencers, educators, and parents the LEGO Foundation aims to equip, inspire and activate champions for play.

What started in 2015 as a passion project for LEGO employee Erik Ullerlund Staehr and Odense University Hospital, Denmark, is now being scaled and piloted with new training material for hospital staff. The team developed the sets as a way to help children navigate the often daunting and intimidating process of having an MRI scan. The sets are designed to help children better collaborate with clinicians and understand what the large and complex MRI machine is all about.

Erik Ullerlund Staehr, Chemical Technician at the LEGO Group said: “I’m extremely proud of this project and the positive impact it’s already had. I’ve seen first-hand how children have responded to these models; making them feel more relaxed and turning an often highly stressful experience into a positive, playful one. From making a few LEGO MRI models with other LEGO employees in our free time, it’s amazing to see the project now being rolled out more broadly.”

Rok Zgalin Kobe, Senior Designer at the LEGO Group has been spearheading the model design and functionality adjustments of the LEGO MRI Scanner.
The same year as Erik Ullerlund Staehr and Odense University Hospital developed their initial prototype LEGO MRI model, Benjamin H. Taragin, MD – a pediatric radiologist at University Radiology Group, Rutgers University, NJ, USA as well as Assuta Hospital Ashdod, Israel, Erik Ranschaert – a radiologist and advisor in AI for radiology, Belgium, and LEGO Certified Professional Dirk Denoyelle also from Belgium created similar LEGO models which have too been distributed and sold around the world from 2014-2018. Their model was originally developed in conjunction with the Society of Pediatric Radiology and Children’s Hospital at Montefiore. They have now all joined forces with Erik Ullerlund Staehr and the LEGO Foundation through a shared ambition to positively impact the lives of many more children by bringing the LEGO MRI Scanner and training material to more hospitals around the world.

The LEGO MRI Scanner is developed with a child-centered focus and learning through play approach, which strengthens children’s skill development. The model is designed around the child’s MRI treatment and is a means for clinicians to facilitate both roleplay and dialogue so that the child feels safe and can build confidence and resilience before the actual journey, in turn reducing stress and anxiety. Play motivates the child’s natural curiosity and openness to try new, sometimes difficult, experiences. Because play facilitates a safe and comfortable “training space” for real-life events and consequences, it is a powerful way for children to develop their social and emotional skills. It can also be a part of a range of playful experiences that contribute to clinicians’ ambition of reducing the use of anesthesia.

Since the first prototype was made, the radiology department team at Odense University Hospital have used the LEGO MRI Scanners as part of their playful learning approach to help over 200 children aged four to nine annually.

Ulla Jensen from the Department of Radiology at Odense University Hospital Denmark said: “MRI Scanners are huge machines. They also make a lot of noise which can be very daunting for children. Our team has found that the use of models such as this LEGO model has led to more positive, calm experiences for many children. This benefits the child, their family, and also the quality of the MRI scan, which relies on the person being very still for up to an hour to work.”

Close to 100 hospitals across the world have already benefitted from the use of the LEGO MRI Scanner thanks to Erik and his heartfelt dedication. The project has been extremely well received and in order to create an even bigger impact and a better grasp of its potential, the LEGO Foundation is now scaling the project and encouraging hospitals from all over the world to apply for one of the 600 models currently available. Built by LEGO volunteers, the models will be shipped completely free of charge to hospitals. Once distributed, the LEGO Foundation will generate insights from participating hospitals to continue building evidence-based research and in turn guide potential future projects.

To best support the use of LEGO MRI Scanners, the LEGO Foundation has developed four training videos to accompany the model. These videos are designed to help medical staff guide children through the process of an MRI scan – and in turn, facilitate their social and emotional learning through play. The videos are available free of charge to any hospital wanting to learn more about the approach.

Dorthe Feveile Kjerkegaard, Play & Health Specialist at the LEGO Foundation added: “MRI scans can be scary, anxiety-inducing experiences for all of us, but especially so for children. Through a playful learning approach, such as the LEGO MRI Scanner, we’ve been able to take children through the process step by step to prepare them for what’s to come, and in turn, help them to feel safe by making the unknown, known. The feedback so far has been overwhelming. We’re honored to be able to help both children and their parents have a more positive and less stressful experience, and look forward to supporting even more families around the world with the expansion of this concept.”

The LEGO Foundation will donate 600 models to the first 600 eligible applicants. Applicants must be based in a radiology department at a hospital, with an existing MRI scanning facility for use with children and adolescents. To access the request form visit: LearningThroughPlay.com/LEGO-MRI-Scanner-Models. The model comes with close to 500 elements and measures 13cm wide, 25,5cm long, and 10,5cm high.

What do you think? How do you like this initiative by the LEGO Foundation? Feel free to share your thoughts or any questions you may have in the comment section below!