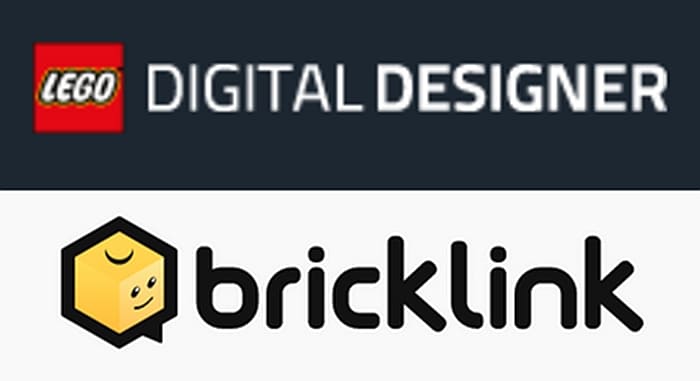 Billund, Denmark –  January 12th, 2022: Today, the LEGO Group announced that BrickLink Studio will replace LEGO Digital Designer as the official virtual LEGO building software going forward. The LEGO Digital Designer (LDD) website will close on January 31st, after which time LDD will no longer be available for download. While downloaded versions of the LDD application will continue to work, people are encouraged to download BrickLink Studio, import their LDD files, and use Studio for 3D LEGO building files, and use Studio for 3D LEGO building.

At the end of January 2022, BrickLink Studio will be the LEGO Group’s only public digital building software program, giving fans worldwide the opportunity to build models with an endless bin of bricks. Currently, the LEGO Group maintains two public 3D building programs: BrickLink Studio and LEGO Digital Designer, known as LDD. The LEGO Group is committed to supporting the digital building community and, as such, will focus on Studio and will withdraw support for LDD. As a result, LDD will no longer be available for download after January 31, 2022. The LEGO Group is focusing 100% of its efforts on one building software. The BrickLink Studio software brings an integrated and excellent experience of designing, building, ordering bricks and sharing digital designs.

LEGO Digital Designer was released in 2004 as the LEGO Group’s 3D building tool. LDD pioneered real-time rendering of LEGO bricks, virtual brick connectivity, and the compact LEGO Exchange file format (LXF) which made LEGO models built in LDD light and portable. It has played a prominent role in various offerings, from LEGO Factory, LEGO Design ByME, LEGO video games, and movies. Now after almost twenty years since its conception and eighteen years in distribution, LEGO Digital Designer will retire and pass the mantle to BrickLink Studio as the officially supported and maintained 3D building application.

The LEGO Group will continue to support the digital building community by focusing on BrickLink Studio, while LDD will be retired. This means that after the end of January, it will no longer be possible to download the program from LEGO.com/LDD. Fans with a current desktop version of LDD can continue using this program. However, the software won’t be updated or maintained. Additionally, it will no longer be possible to download LDD from LEGO.com after end-January. Starting February 1st, visitors to LEGO.com/LDD will be redirected to BrickLink Studio. The BrickLink Studio team and community are excited and ready to welcome LDD Fans and help them get onboarded to BrickLink Studio.

“Our initial vision for LEGO Digital Designer back in 2002 was to make building on a computer accessible and fun for children – to play with and share their creations online”, said Ronny Scherer, producer of the first-generation LEGO Digital Designer. “I am so impressed with how the community of creators has evolved. Builders—enthusiasts and professionals alike—have used LDD in wonderful and unexpected ways. They took ownership and created the most amazing virtual LEGO models and have grown the virtual building ecosystem. I am so proud of the team behind LDD and the greater virtual building community. They have truly inspired a generation of digital LEGO creators.”

Tormod Askildsen, head of AFOL Engagement for the LEGO Group, has been intrigued by digital building since using LDD to bring alternate model instructions for the LEGO Factory Hobby Train set to market in 2007. “When the LEGO Group acquired BrickLink,” Askildsen said, “one of the things that impressed and inspired us was their purposeful development of the Studio software. For digital building to be not only a nice feature for some but a meaningful part of many people’s LEGO building experience, it must be an integrated and useful part of both the design, the building, and the sharing experience. The talented team behind Studio see this clearly and continue relentlessly to further innovate and improve the Studio experience”.

In 2014, then-independent BrickLink created the BrickLink Studio software as a free virtual LEGO building tool. Studio was built on the industry-standard Unity gaming engine and is designed to integrate with the BrickLink Marketplace. Its .io file format is based on the fan community-developed LDraw standard with part connectivity data added to give digital bricks clutch power. Users can import LEGO models built in LDD, LDraw, and other popular tools. Studio includes useful features like model stability checking, built-in photo-realistic rendering, and an integrated instructions maker.

“Studio was created because at BrickLink, there is a great belief in how digital LEGO building could unlock the true potential of everyone’s creativity by lowering the entry barriers and motivating people to inspire each other,” says Casper Thingholm, Head of BrickLink. “Going forward, the Studio team will continue to focus on making digital building as intuitive as physical building, and encourage even more builders to share their creations to inspire and help each other.”

A special episode of LEGO Bits N’ Bricks Podcast will be dedicated to digital building with LEGO bricks. Subscribe to the podcast to get a notification when it’s out. And if you have any memories you want to share about your experience with LDD or BrickLink Studio, feel free to share them in the comment section below.

LEGO has been offering two different ways to purchase LEGO pieces at their online shop. Pick-A-Brick is like the online version of the PAB Wall at LEGO stores, with basic and useful pieces. And Bricks & Pieces is for purchasing parts from recently released LEGO sets, as well as for requesting missing/broken parts via customer service. The differences and overlaps created some confusion, so LEGO is now merging the two programs. Details below. 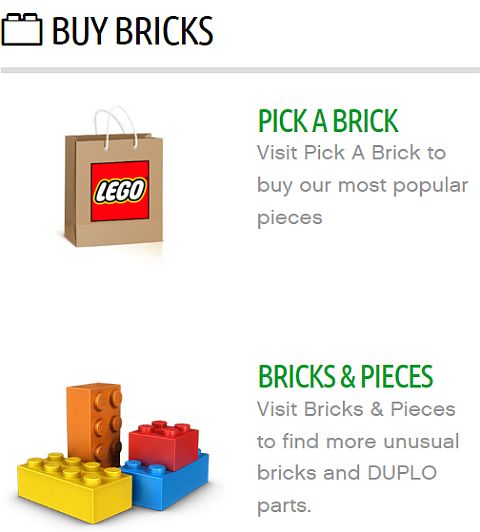 Our current Pick-A-Brick and Bricks & Pieces setup mean that consumers aren’t aware of the two different experiences. During 2021 we’ve been running tests and meeting with different consumer groups to better understand the current consumer experience.

Based on these learnings our next step will be to create a new merged experience on LEGO.com. We’ll merge Bricks & Pieces and Pick-A-Brick into one front-end experience where consumers can browse our portfolio of elements in one place more easily.

Additionally, we’ll improve the shipping time in the US and Canada by implementing a new fulfillment area in our US warehouse. This will reduce shipping time for our top 1,600 elements from 13-18 working days to up to 5 working days. There will likely be some shipping delays for a short time after we launch this experience.

We’re merging Bricks & Pieces into Pick-A-Brick. With the new Pick-A-Brick setup, you’ll be able to shop across one merged portfolio, with clear visibility between standard and bestseller elements. You’ll also have the option to choose what elements you want from which warehouse. Items that are listed as bestsellers are our most popular elements and will ship from Poland or the US, and your order will be trackable. Standard elements will ship from our Billund warehouse and will not be trackable. It’ll be easy to tell which items are bestsellers by the yellow tag.

We’ve worked hard to align prices between the two different experiences and keep the prices as low as we can while reflecting changes to market conditions. There will be some elements that will be at a slightly higher price and others at a lower price.

In the past, different colors of the same design often had different prices. Now the prices will be more consistent, with some exceptions. Certain colors (like gold and silver), pieces that glow in the dark, and decorated elements will still be priced differently across the same design.

With this new experience, we’ll be introducing a split basket with a threshold for each basket. The split basket view will give you visibility between bestseller and standard elements and where your chosen elements are coming from (either Billund, Poland, or the US). If your basket meets the minimum threshold amount, then you won’t have to pay any handling fees. We’ll continuously improve our supply chain processes to reduce and simplify these handling fees in the future.

This new experience means all parts orders, including those previously made in Bricks and Pieces can be applied to promotions (such as gifts with purchase) on LEGO.com.

Why We’re Making This Change

Analysis has indicated that our current setup isn’t always the best experience. Differentiation between our Pick-A-Brick and Bricks & Pieces experiences isn’t always clear. This new merged experience will bring our portfolio into one place, with clear visibility on standard versus bestseller elements.

Customers who place larger orders currently need to split their order between Pick-A-Brick and Bricks & Pieces. The new merged experience will mean larger orders can be placed in one spot, with greater visibility on delivery times.

When is it Happening and in Which Markets?

The first change happens for the US and Canada when we implement a new fulfillment area in our US-based warehouse in January and start fulfilling Pick-A-Brick orders there. In order for this change to occur, Pick-A-Brick will be unavailable for approximately 48 hours, starting late evening January 23rd to January 25th when Pick-A-Brick comes back online. This outage is planned and is necessary. During this downtime, individual elements will still be available for purchase through Bricks & Pieces.

After that, we’ll roll out the new merged experience as a soft launch. This will allow us to understand what’s working and identify improvement opportunities early.

We’re planning to roll out the new merged experience to the Netherlands, France, Germany, and the UK in early February. This will be followed by Canada, Australia, New Zealand, and the US in late February. We’ll then look to roll out to all other countries globally.

During the soft launch, we’ll use several metrics and insights available to us to understand if the new experience is working as it should. We’ll take any learnings from this soft launch and use them to help us deliver the best experience possible for our customers.

As a first trial, we’ll introduce Build-a-Mini to our shoppers in Europe and Asia. With this tool, you can combine different minifigure parts and create your own minifigure. The Build-a-Mini selection of bricks will only be available for this experience. They won’t be available as part of the Pick-A-Brick assortment.

What do you think? Have you been using Pick-A-Brick and/or Bricks & Pieces? How do you like the idea of merging them together? Do you have any thoughts, questions, or concerns? Feel free to share and discuss in the comment section below!