The story of the LEGO minifigure – Part 4 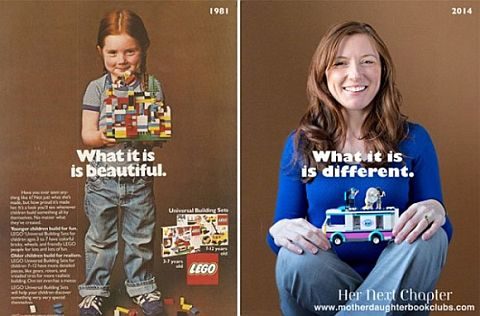 Besides information on the history and making of LEGO minifigures, LEGO also sent images of old catalogs, posters, and advertisements. Most of us are familiar with the “What it is is beautiful.” LEGO ad from 1981, which was extensively circulated around social media, when the LEGO Friends line was first released in 2012. People felt that by introducing LEGO Friends, LEGO strayed from their original position of making gender-neutral construction toys (a topic that has been discussed extensively since then). The picture above shows Rachel Giordano, the little girl in the original ad, and her adult self in 2014. You can read more about Rachel in this article. The text of the original ad reads:

Besides the famous “What it is is beautiful.” ad, there were other ads in the late ’70s early ’80s that had a very similar style and message; a child proudly holding their awesome LEGO creation built with basic LEGO bricks in a rainbow of colors. The ad below appeared in the December 1977 issues of Good Housekeeping, Parents’, and McCall’s, and in 1978 issues of Good Housekeeping, Parents’, McCall’s, Family Circle, and Redbook. 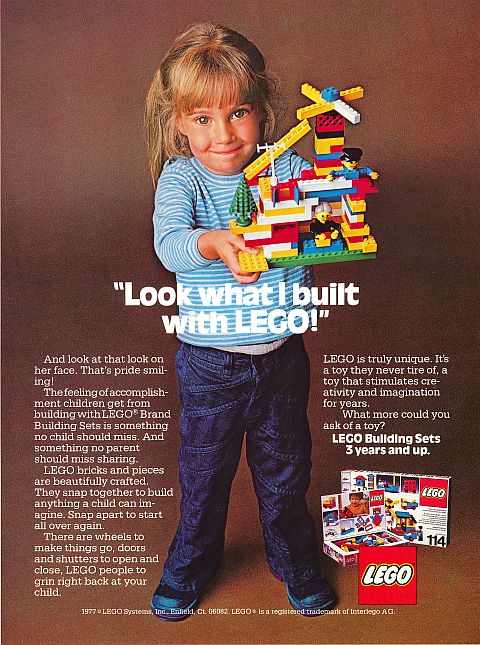 Look what I built with LEGO! And look at that look on her face. That’s pride smiling! The feeling of accomplishment children get from building with LEGO Brand Building Sets is something no child should miss. And something no parent should miss sharing. LEGO Bricks and pieces are beautifully crafted. They snap together to build anything a child can imagine. Snap apart to start all over again. There are wheels to make things go, doors and shutters to open and close, LEGO people to grin right back at your child. LEGO is truly unique. It’s a toy they never tire of, an toy that stimulates creativity and imagination for years. What more could you ask for?

The following ad appeared in the September through December 1977 issues of Family Circle, Good Housekeeping, Redbook, Parents’, and McCall’s. 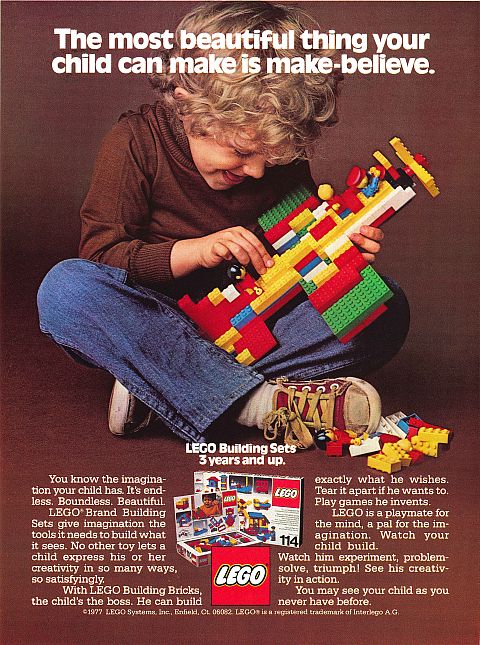 The most beautiful thing your child can make is make-believe. You know the imagination your child has. It’s endless. Boundless. Beautiful. LEGO Brand Building Sets give imagination the tools it needs to build what it sees. No other toy lets a child express his or her creativity in so many ways, so satisfyingly. With LEGO Building Bricks, the child’s the boss. He can build exactly what he wishes. Tear it apart if he wants to. Play games he invents. LEGO is a playmate for the mind, a pal for the imagination. Watch your child build. Watch him experiment, problem-solve, triumph! See his creativity in action. You may see your child as you never have before. 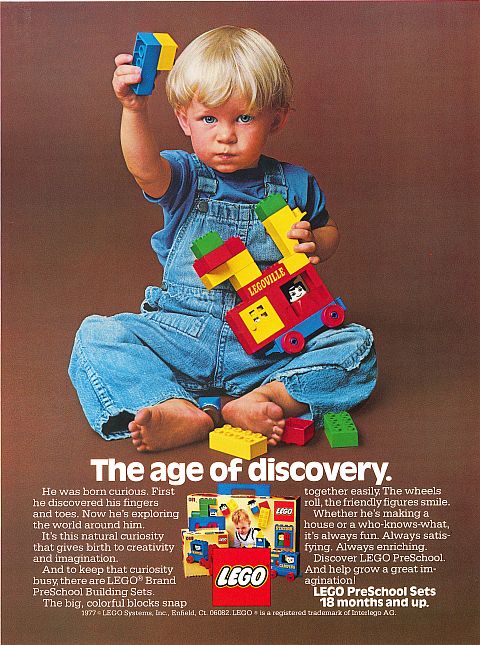 The age of discovery. He was born curious. First he discovered his fingers and toes. Now he’s exploring the world around him. It’s natural curiosity that gives birth to creativity and imagination. And to keep that curiosity busy, there are LEGO Brand PreSchool Building Sets. The big, colorful blocks snap together easily. The wheels roll, the friendly figures smile. Whether he’s making a house or a who-knows-what, it’s always fun Always satisfying. Always enriching. Discover LEGO Pre-School. And help grow a great imagination.

The following two ads are from 1978 and 1979 respectively. Notice that the first ad emphasizes the compatibility of standard LEGO and LEGO DUPLO bricks to help younger children transition from larger bricks to smaller ones. Also, interesting use of those large buildable figures on the second picture! 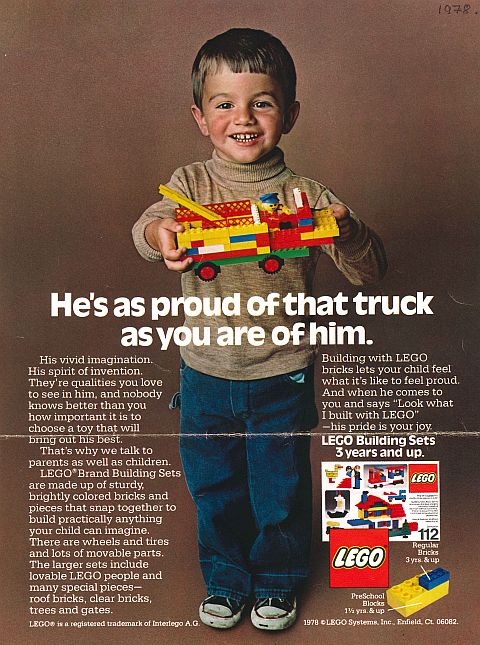 He’s as proud of that truck as you are of him. His vivid imagination. His spirit of invention. They’re qualities you love to see in him, and nobody knows better than you how important it is to chose a toy that will bring out his best. That’s why we talk to parents as well as children. LEGO Brand Building Sets are made of sturdy, brightly colored bricks and pieces that snap together to build practically anything your child can imagine. There are wheels and tires and lots of movable parts. The larger sets include lovable LEGO people and many special pieces – roof bricks, clear bricks, trees and gates. 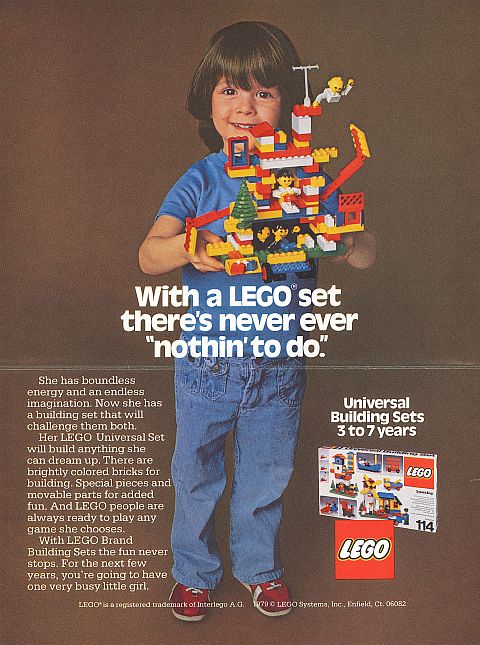 With a LEGO set there’s never ever “nothin’ to do”. She has boundless energy and an endless imagination. Now she has a building set that will challenge them both. Her LEGO Universal Set will build anything she can dream up. There are brightly colored bricks for building. Special pieces and movable parts for added fun. And LEGO people are always ready to play any game she chooses. With LEGO Brand Building Sets the fun never stops. For the next few years, you’re going to have one very busy little girl.

Whoever wrote these ads for the LEGO Group, clearly knew how to appeal to parents who wanted to keep their children learning, experimenting, having fun, and keeping busy. What do you think? How do you like these early LEGO ads? And how do you think they compare to marketing and advertisement today? Feel free to share your thoughts and discuss in the comment section below! 😉