Like many LEGO fans, I have a conflicting relationship with the #10260 LEGO Creator Downtown Diner. It’s one of the best LEGO Modular Buildings in terms of building experience, it’s full of interesting building techniques, it never gets boring during the building process, and it overall looks great. On the other hand, the Art Deco/Streamline Moderne architecture is a bit too much for some. Streamline Moderne is an architectural style that’s either loved or hated, and it doesn’t blend well with anything with its bold curves, long horizontal lines, and unusual colors. In fact, most Streamline Moderne buildings look best as standalone structures, or in a row of similar buildings. Although LEGO designers tried to tone down the style by wrapping it around a neutral brick building, the Downtown Diner still stands out as unusual amongst the other LEGO Modulars. 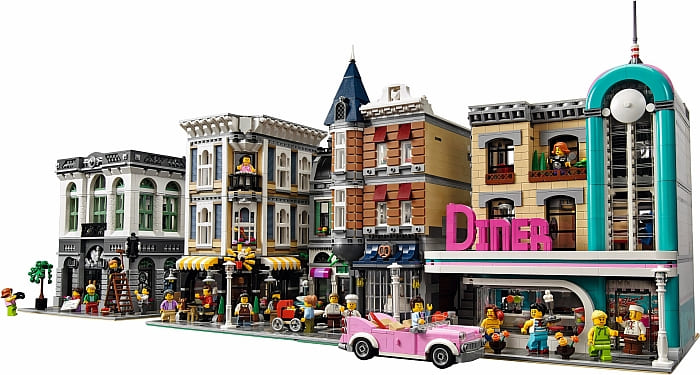 Even though I got the LEGO Creator Downtown Diner back in 2018, I didn’t build it until just recently. I’m one of those people who don’t really like the Art Deco style, and since I have limited space for my Modulars, I didn’t want to “waste space” with this set. My plan was to build it just for the learning experience, than take it apart for parts. However, I had such a positive experience building it, and there are so many sections I really like, I decided that it was worth trying to “save it” by toning down the Art Deco elements. 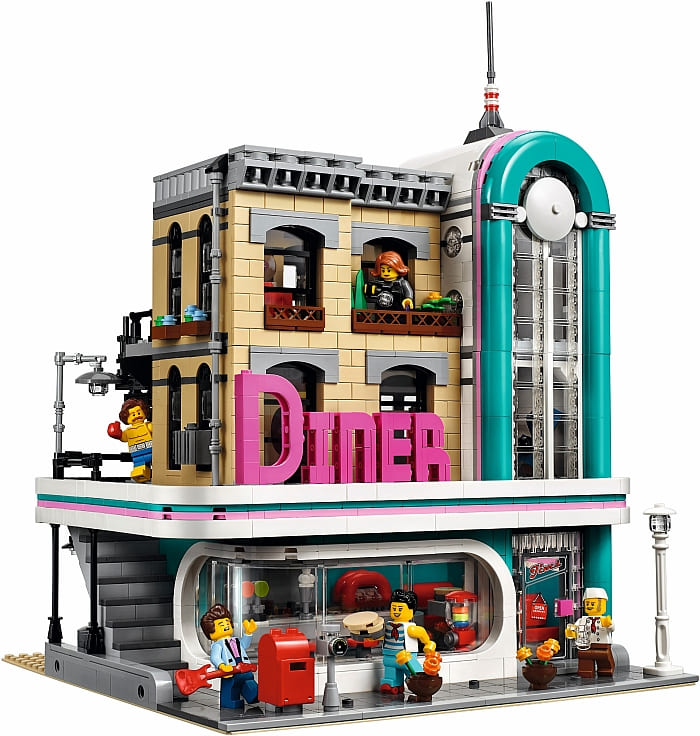 The sections that I do like in Downtown Diner is the tan building (it’s simple, but very nice), the tall tower looking section on the right with its porthole windows (it looks really good next to several of the other Modulars), the color combinations, and pretty much all of the interior. The sections I didn’t like are the long horizontal overhang that spans the entire width of the building, the bold curves that wrap around the windows on the ground floor, the oversized lettering, and the significant gap that the steps create on the left (this makes it difficult to place the set next to other Modulars without exposing some ugly sidewalls). I also felt that the diner was too big compared to the interior spaces of the other Modular buildings, and it could be split into two separate sections. 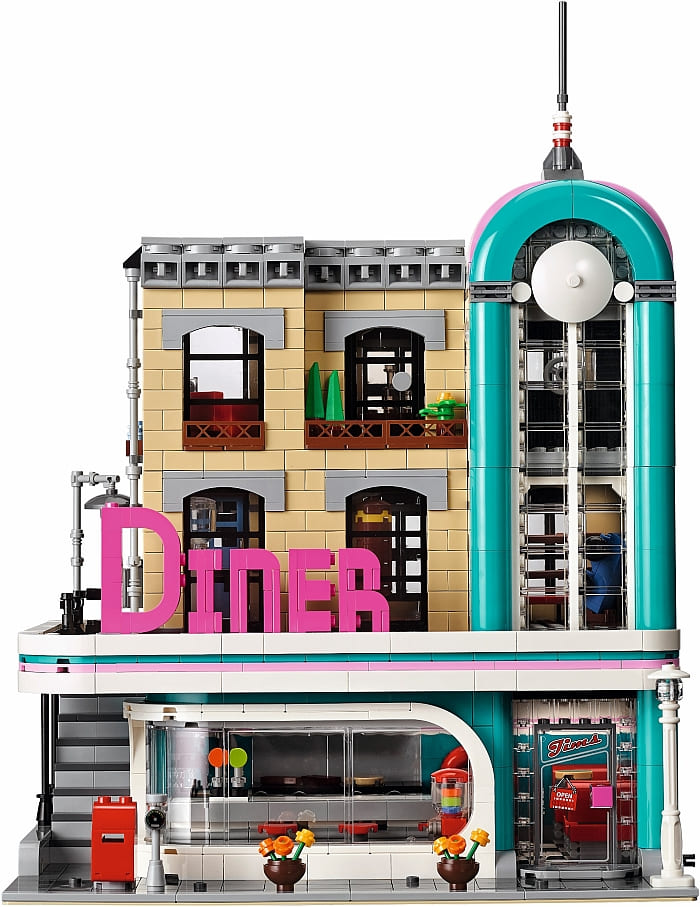 So, my goals were as follows: 1.) Make the overhang shorter 2.) Remove the curves from around the windows on the ground floor 3.) Make the lettering smaller 4.) Replace the steps with a narrow building 5.) And split the diner into two smaller retail spaces. Below, I will explain in a bit more detail what I did for solving each of the problems.

Making the overhang shorter was fairly easy. I just removed the section that expanded over the steps. I still wanted it to wrap around the side a bit as I was going to place a door there for the smaller diner. I basically locked in the ends where the narrow building begins. I also had to adjust the roof drain pipe a bit. 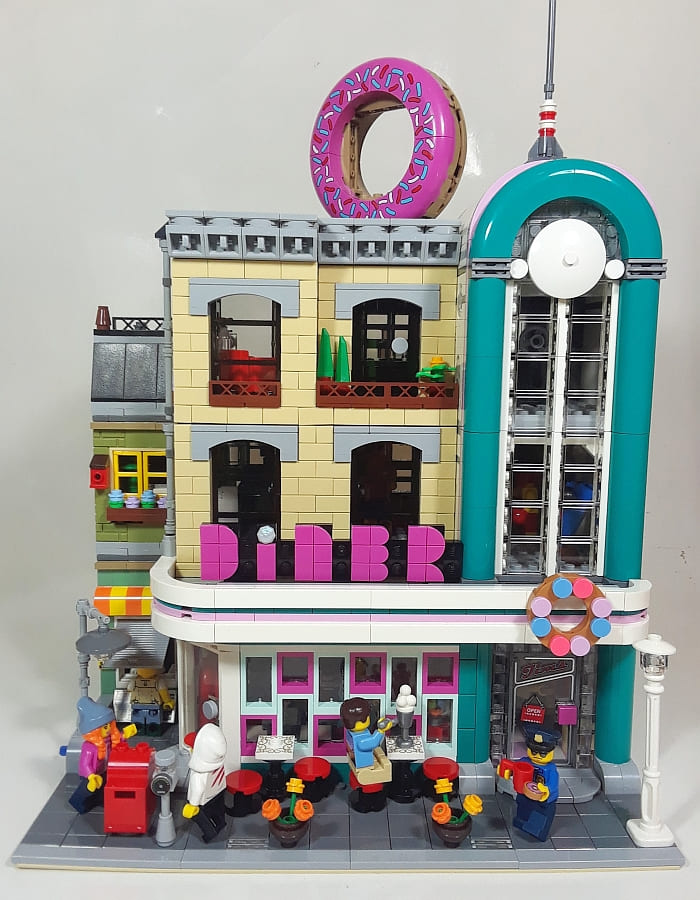 Removing the curves from around the windows was also fairly easy, but this exposed some very plain looking windows. A set that I really like and always wanted to utilize in a Modular Building is the #41336 LEGO Friends Emma’s Art Café. It has a really nice color-scheme of white, light-aqua, dark-pink, and two shades of purple, and I love the arrangement of the windows. I initially considered replacing the overhang of the diner with the awning of the art café, but then decided against it, when I discovered that the shorter overhang was working out just fine. So, the only feature I ended up using from the art café is the corner entrance and the arrangement of the aqua and dark-pink windows. (This shows just how much ideas can change as you build!) 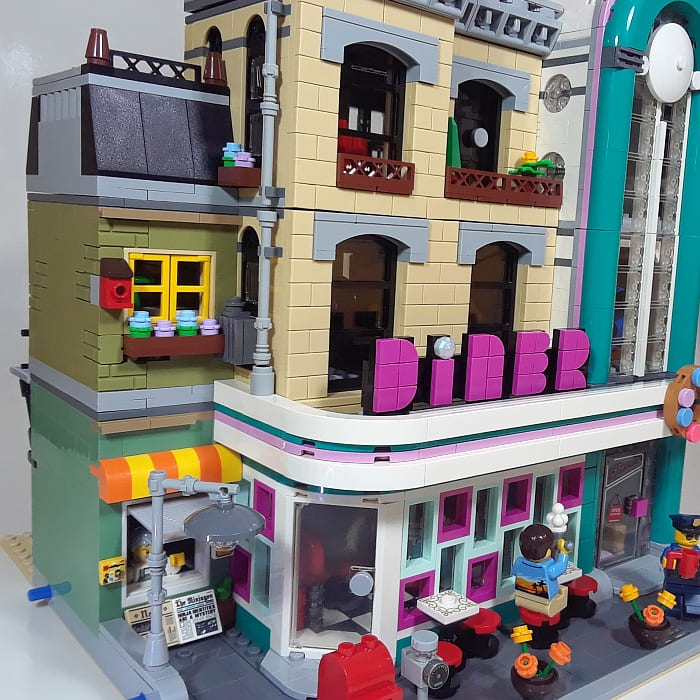 As far as making the lettering smaller, I have been collecting all of the LEGO DOTS bracelets and LEGO DOTS extra packs, so I had plenty of colorful tiles to work with. I kept the original dark-pink color as I liked it, but made the letters about half the size using a simple “lettering with tiles” technique. I like it so much better this way! 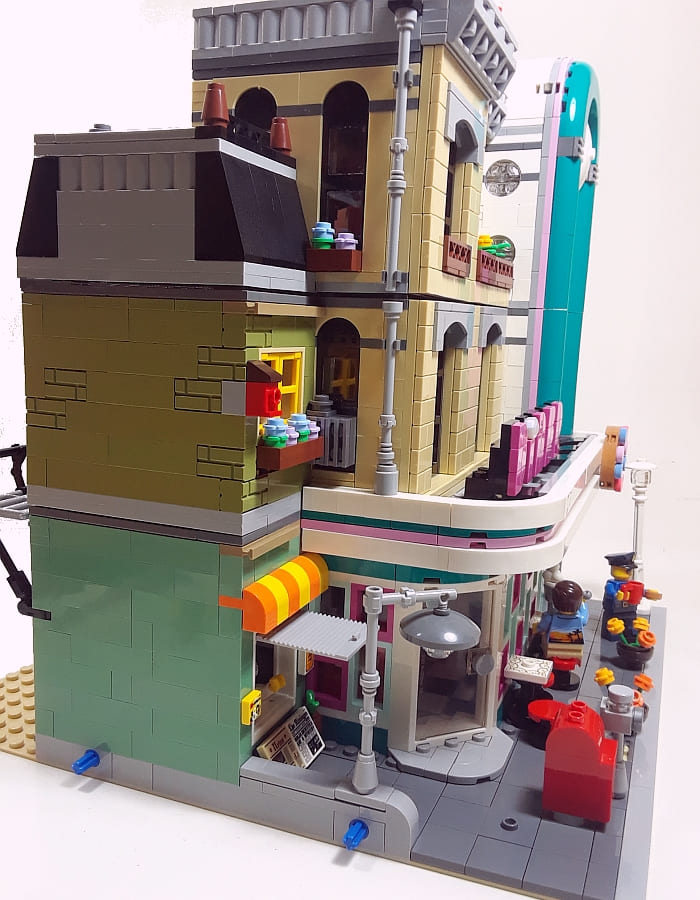 My inspiration for the narrow building came from the #21310 LEGO Ideas Old Fishing Store. I used the same sand-green and olive-green bricks for walls, and the second-story small office is right out of that set. 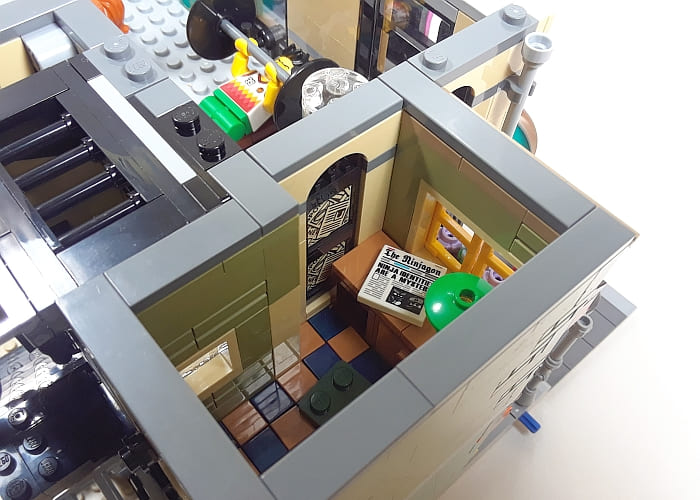 The first story ended up becoming a small newsstand, and under the high roof there is a small attic storage area. I wanted to keep this building fairly neutral in color as it’s next to the bold colors of the diner, but I also didn’t want it to disappear in the shadows. Thus, I added the yellow and orange awning over the newsstand, the yellow window, the flowers, and the red birdhouse. 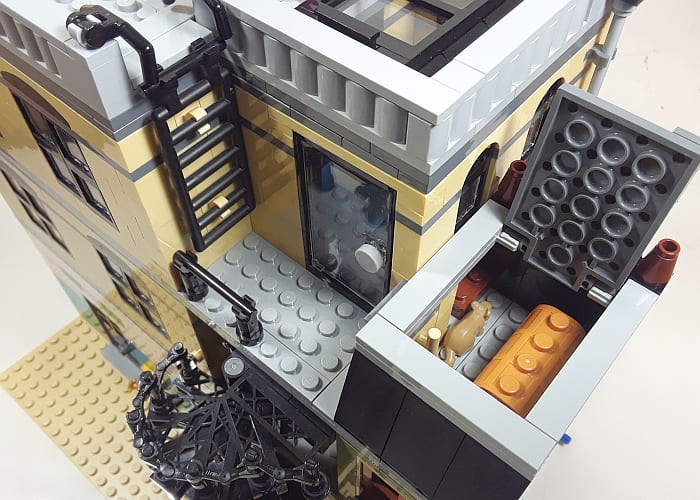 Because I removed the original steps to the second floor, and because now I had an extra two-story building, I had to install a new staircase at the back. One other change I made here is adding the meters on the back wall, which is something directly out of the #21310 LEGO Ideas Old Fishing Store that I really liked. 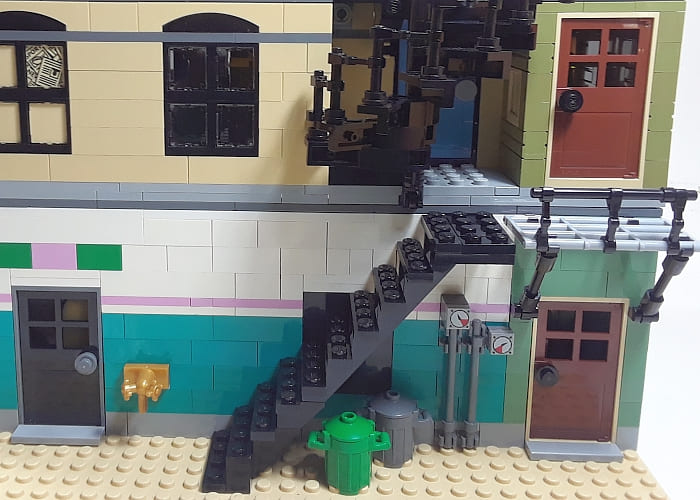 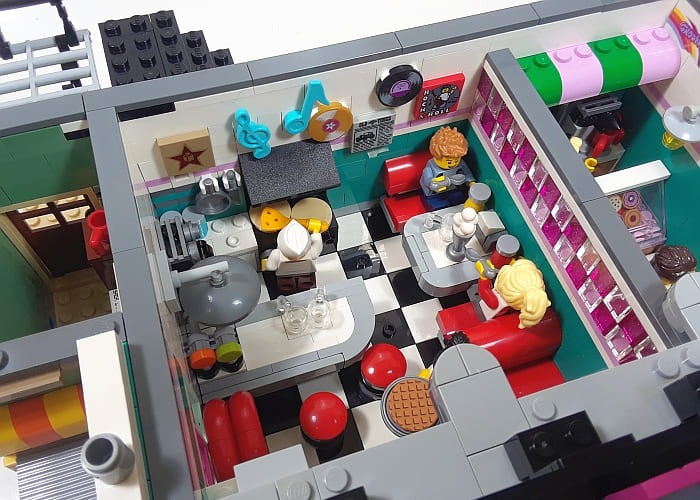 I originally considered putting a surf shop here, but then somehow I ended up with a donut shop. It just sort of happened when I put in the dividing wall between the two spaces and came up with the translucent-pink and clear checkered pattern. It looked like a better match for a donut shop rather than a surf shop. Plus, putting a donut shop in this space also gave me an excuse to use the giant donut from the #60233 LEGO City Donut Shop Opening – something I have wanted to do for a long time. I also added outside seating for the diner just to make the front a little bit more interesting. 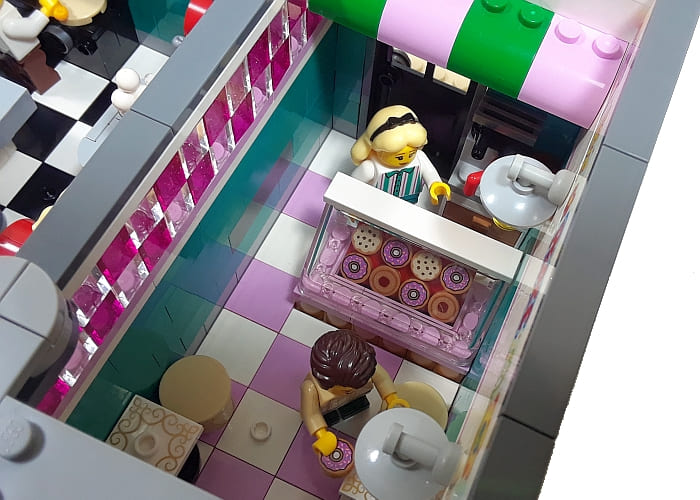 Making the diner side of the building smaller took a bit of rearranging. The booths remained the same, but the jukebox had to move, and the long counter and the range with the hood had to shrink from their original size. (The long counter is a fairly complex sideways build. Just know that if you want to make it shorter, you will need this new centered bracket piece in white.) Still, everything is still there, and I also added some additional memorabilia on the back wall – like it’s often done in 1950s diners. 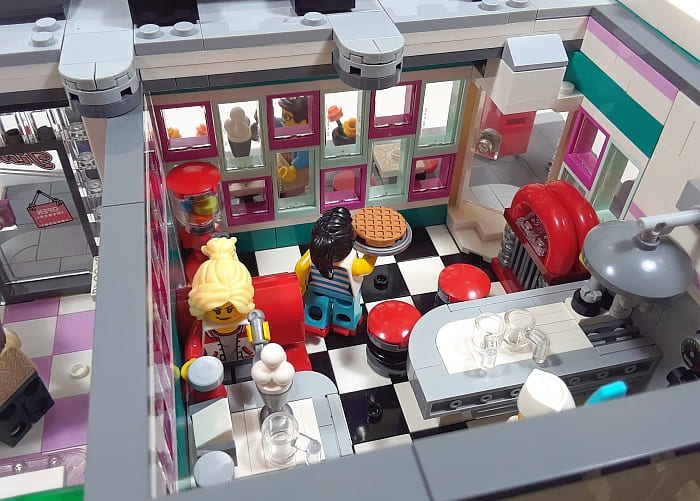 I kept the boxing studio on the second floor and recording studio on the third floor pretty much the same, as I like these spaces as is. Here is an overall shot of how the updated diner set looks on my street. 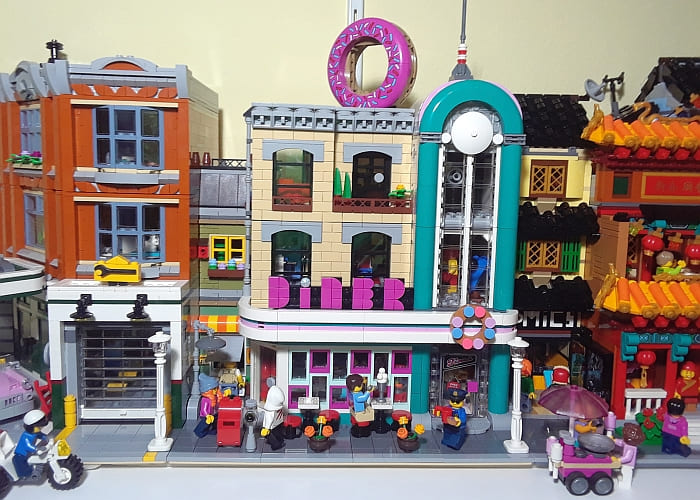 So, I was able to accomplish all my initial goals, and I’m much happier with the #10260 LEGO Creator Downtown Diner this way. It’s still colorful, but the shapes are not so outlandish. This project was fairly quick; it only took a few evenings to come up with the new arrangements, and a couple of extra days to receive the light-aqua windows and some other pieces I didn’t have. If you have been thinking about modifying the #10260 LEGO Creator Downtown Diner, I hope this narration gives you some ideas. And if you don’t have the set yet, but would like to give it a try, you can get it at the LEGO Creator section of the Online LEGO Shop.

What do you think? How do you like the LEGO Creator Downtown Diner? Do you have the set already? What do you think of the style? Did you make any modifications yourself? Feel free to share and discuss in the comment section below!

And here are a couple of other Modular Buildings I recently worked on: