One of the new LEGO Star Wars sets that will be released this fall is the #75283 LEGO Star Wars Armored Assault Tank (AAT). Today, I wanted to take a look at this set and if it will be worth to buy when it become available. 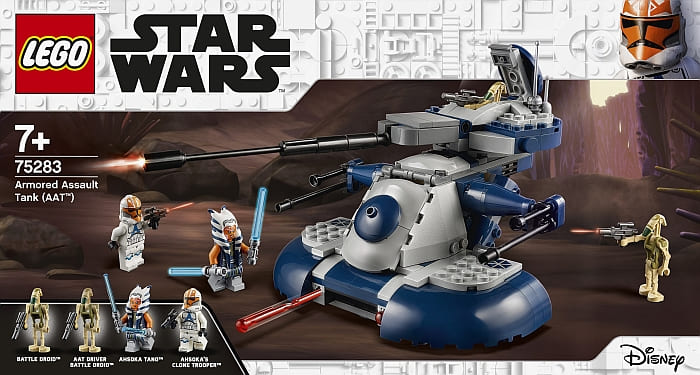 According to the set’s description, which is already available at the Online LEGO Shop, the #75283 LEGO Star Wars AAT comes with 286 pieces and will be priced at $39.99. This means 14 cents per piece, which is fairly normal for LEGO Star Wars sets, although still pricey compared to other LEGO themes. In my way of thinking, this means that the set has to have a combined rating of at least 8.5 in the following categories: minifigures, design, playability, and displayability. Alright, let’s discuss this! 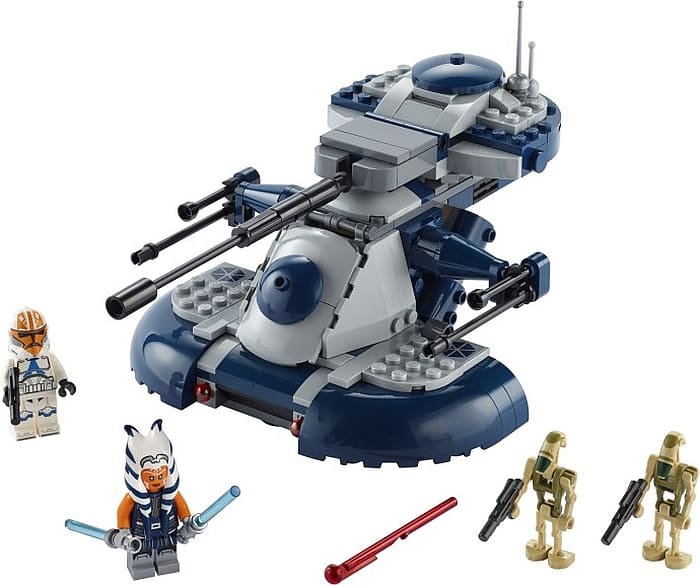 The set comes with four minifigures; Ahsoka Tano, Ahsoka’s Clone Trooper, and two battle droids. Ahsoka really stands out amongst the minifigures with a new outfit and highly detailed headgear. I’m sure LEGO Star Wars collectors will be drawn to this set just because of this minifig. But she is not the only exclusive character here. The Clone Trooper is also new, and the two battle droids with green markings only appeared in two 2019 sets. Taking everything into consideration, my score for the minifigures in this set is an impressive 9.5/10.

Looking at the design of the AAT, there are some plusses and minuses. On the positive side are the opening cockpits, the well-integrated spring-loaded shooters, and rotating turret with an elevating cannon. They provide a good balance between playability for kids, and displayability for collectors. On the negative side, the #75283 LEGO Star Wars AAT comes with less detailing than the #8018 LEGO Star Wars AAT released in 2009. That set had some nice stickers at the front that really added to the looks of the tank. For some people, this could make the model a little less desirable. But still, I’m impressed, and I feel that overall the design is pretty solid. I will give it a 7/10. 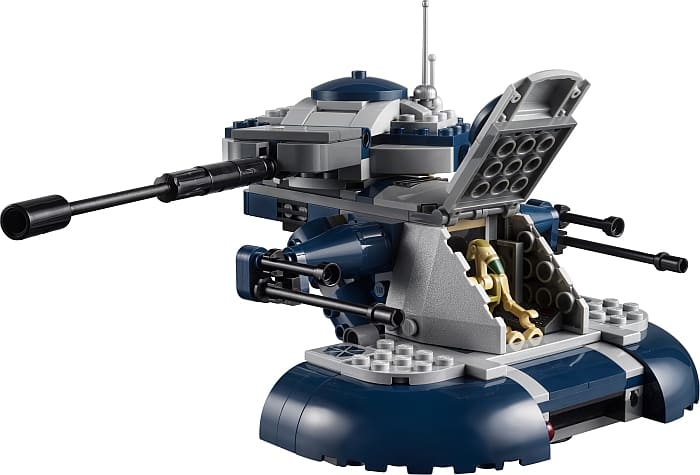 As far as playability, we already talked about the rotating turret and cannons. They can make kids feel like they are really in the heat of the battle, taking down clone troopers with the spring-loaded shooters and recreating thrilling 501st Legion vs. Battle Droid conflicts from Star Wars: The Clone Wars. I would give playability a 9/10.

As we mentioned above, the displayability of the set is somewhat diminished by the lack of detailing on the tank. The guns are pretty solid though, and collectors can pose the turret. Overall it’s a mostly faithful physical representation of the vehicle from the TV show. And Ahsoka is definitely worth displaying due to her exclusive print. I think that this set will mostly find itself in the background of a battlefield display. It could also be a good purchase if you don’t have one of the earlier AAT models. For displaying, I give this model a 7.5/10.

So, let’s recap. The set comes with an impressive collection of minifigures, it has a solid design for its scale, and it has good play-features. It’s not the most impressive as a display piece (besides Ahsoka), but it would look good in a battle scene or as an addition to an existing LEGO Star Wars collection that lacks an AAT. This brings us to the final score of 8.25, which doesn’t really meet my initial grading criteria. This doesn’t mean the set is not worth it, but it may not be worth it at full price. I would wait for a sale where you can pick it up for less than the regular purchase price. And if you are interested, you can also check out the other upcoming LEGO Star Wars sets at the LEGO Star Wars section of the Online LEGO Shop.

This is BestWays doing it the brick way. Let me know what you think about this set and my grading of it in the comments section below. Also, are there any other LEGO Star Wars sets coming out later this year that you’re looking forward to? Feel free to share that as well!