Medieval lovers rejoice – the #21325 LEGO Ideas Medieval Blacksmith set is a slice of medieval life brought to the bricks with loads of realistic detail!  This blacksmith’s workshop was originally designed by LEGO fan Clemens Fiedler, but the final product has undergone a lot of revision.  There are some definite similarities like the half-timber style second story and the roof with an angle in the middle, but the LEGO designers were able to make the set brighter and less cluttered – fortunately without destroying its realistic look! 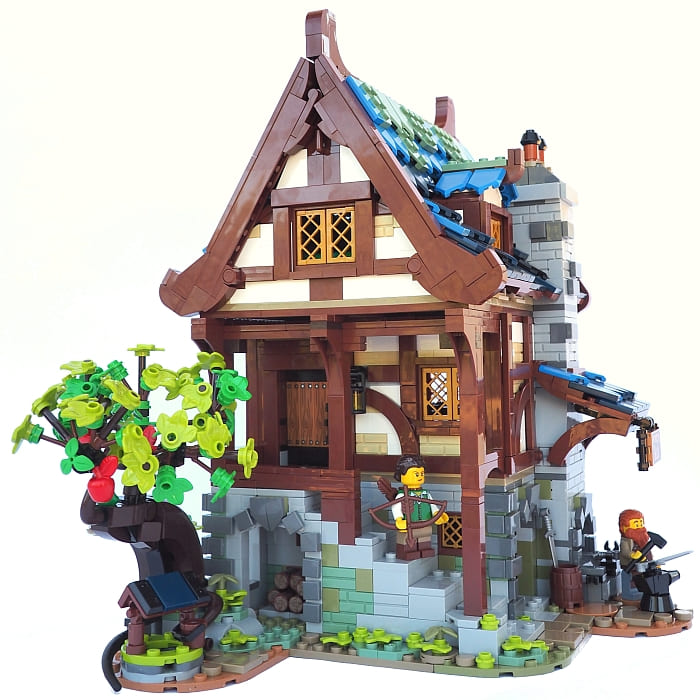 The set brings back the Black Falcon knights; two of them are coming to buy armor or get repairs. The older knight’s shoulder armor doesn’t look very medieval – in fact, it looks like it’s from Ninjago.  Oh, it is from Ninjago!  What do you know…  Maybe he is coming to the blacksmith to get the right side fixed. 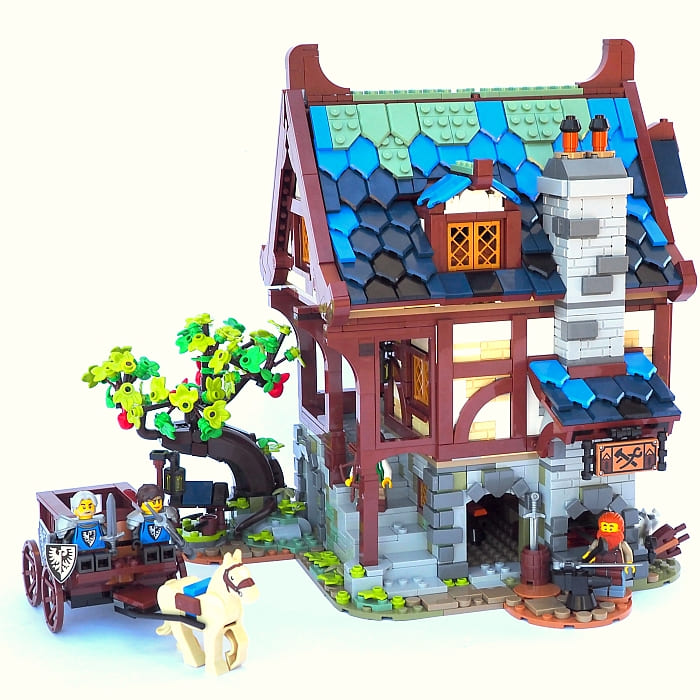 The Medieval Blacksmith is impressively ready for 360 viewing. It’s also surprisingly sturdy, and although the carrying points are limited since you have to be careful not to lift the second story off by mistake, it’s easy to transport once you find a good spot to hold it. 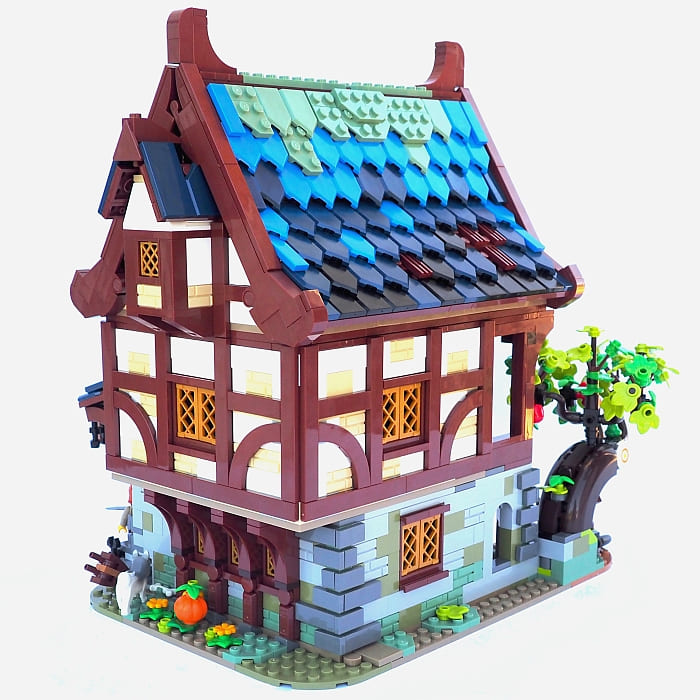 The detail doesn’t stop with the outside either; there are three fully-furnished interiors. I have to call out the bearskin rug in the attic especially. 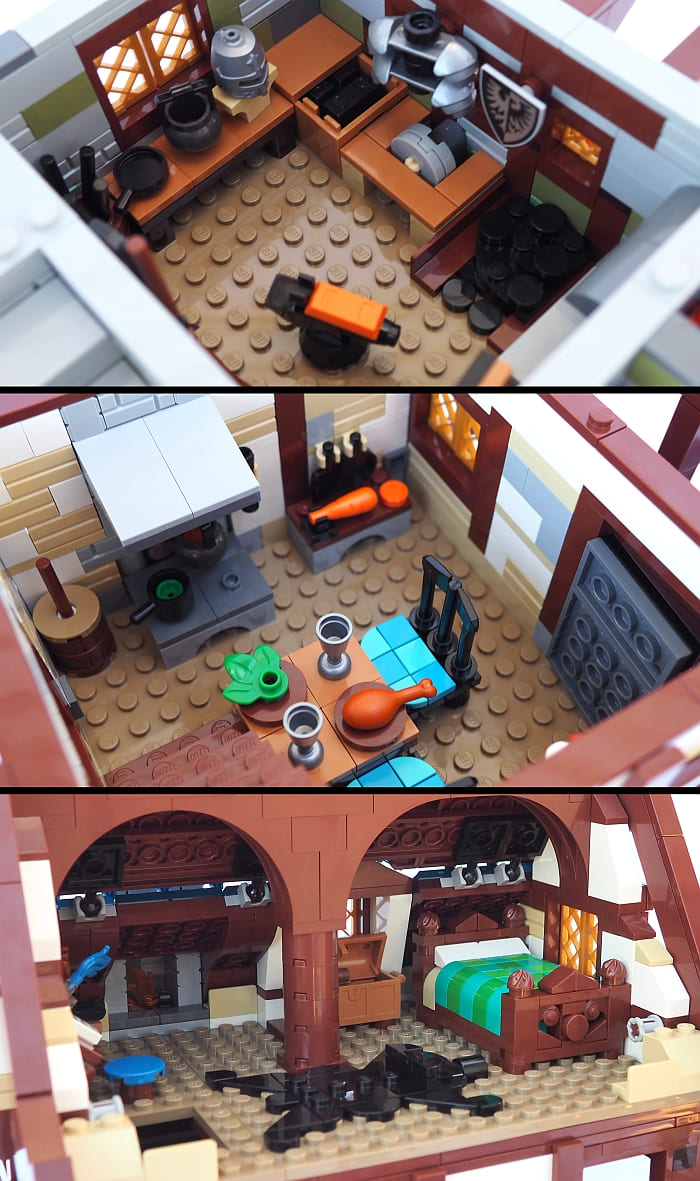 There’s only one function in this set (besides opening doors and windows and simple things like that), but it’s a very fun one. Pushing in the bellows on the right of the forge triggers a light brick and simulates a fire in the chimney.  It’s strangely satisfying to play with! 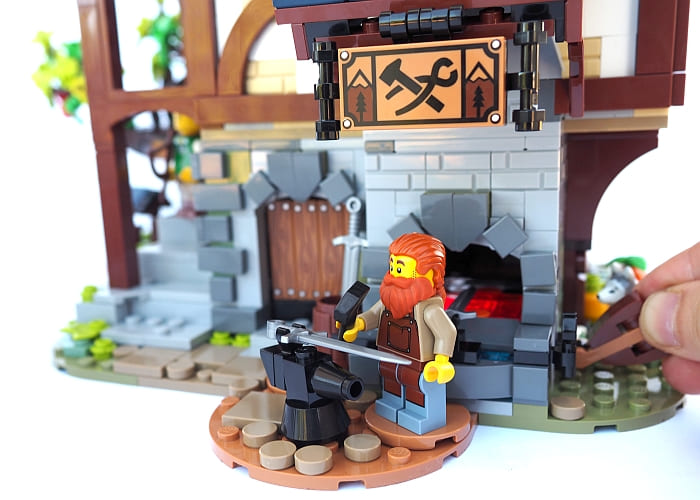 The Medieval Blacksmith is not small – it dwarfed this little half-timber house I happened to have on my desk at the same time. 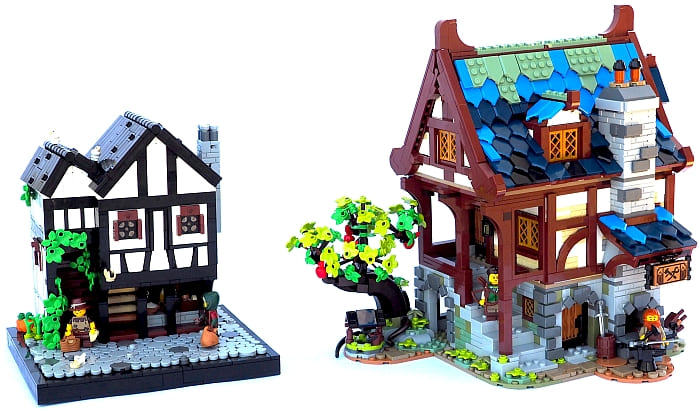 My little brother and a friend of his had loads of fun exploring this set while I was supervising carefully and trying to visualize what I would have done differently if it were my own creation. Although it only has one real function (the light brick), this set has so much space for kids to interact with and create stories for.

Four Bricks Tall took the Medieval Blacksmith on a forest trail for a beautiful picture and inspired me to get some outdoor shots as well.  While I’m at it, I’ll complain about the wagon.  I’m not sure why knights are in wagon anyways, it makes it look like they just came off a farm, but on top of that this wagon is blocky and looks unrealistic. 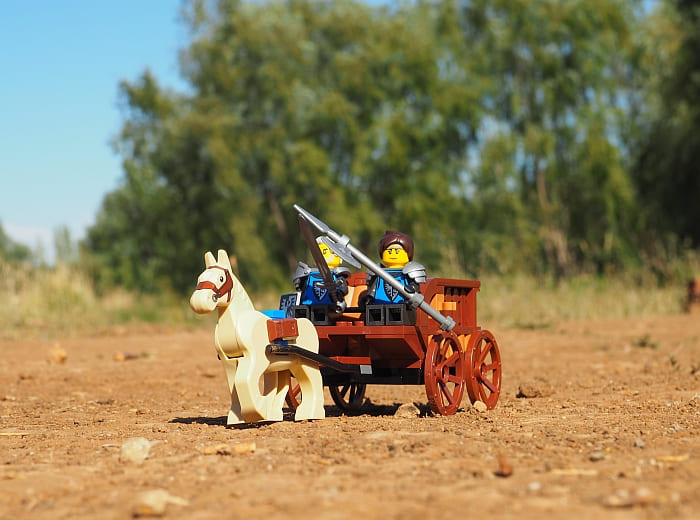 Besides the wagon, I’m also not a huge fan of the moss on the roof. There just seems to be way too much of it, and besides that, sand green and blue isn’t a great color combination. 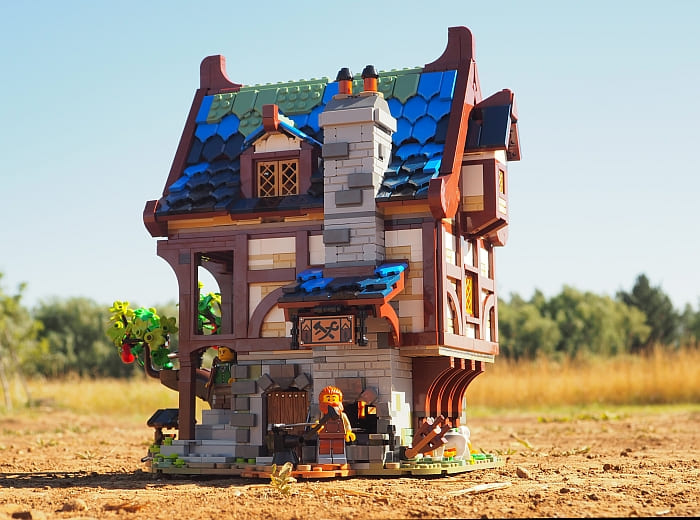 Another small gripe of mine is the dog. A husky hardly seems the right animal for a medieval blacksmith.  I also have to mention the tree; it’s a bit spindly and doesn’t look very organic.

The build process for this set was enjoyable. It’s a large set, and took several hours to put together, but except for the tree there’s not much dull repetition.  On the other hand, the instructions frequently had lots of pieces in one step and sometimes the yellow lines meant to highlight new pieces were visually confusing.  Not a big deal, but it would probably be difficult for kids to follow.

There are two techniques that are particularly worth mentioning; the brilliant construction for the wooden “A” on either side of the house, and the stylish use of shield tiles for the roof. If you’d like to see more about the build process, I put together a time lapse video below.

I love this set – it’s a highly playable, highly displayable medieval themed LEGO build. If medieval is even a little bit your thing, you’re sure to love it too.  And for those one or two things that could be tweaked… well, stay tuned, because I’ll be hammering those out in another article soon! In the meantime, if you would like to check out the set, it’s now available at the LEGO Ideas section of the Online LEGO Shop. 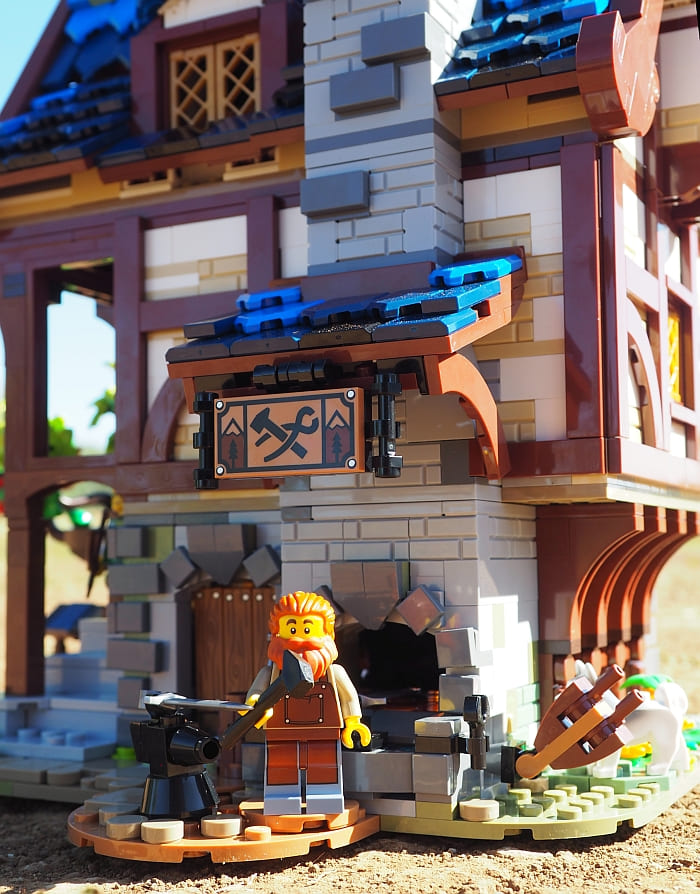 What do you think? How do you like the LEGO Ideas Medieval Blacksmith? It’s about time we get a new medieval set, isn’t it?  How do you like the details and play-features? Anything you would like to change? Feel free to share your thoughts and discuss in the comment section below!