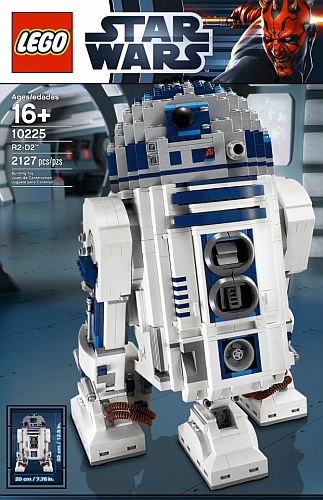 Presenting the iconic R2-D2 as you’ve never seen him before!  Everyone’s favorite droid from the Star Wars galaxy is now part of the LEGO Ultimate Collector Series. The model features fantastic detailing, such as retractable leg, front panels that open to reveal a universal computer interface arm, a circular-saw, rotating head and two fold-out front spacecraft linkage control-arms. With the included fact plaque and R2-D2 minifigure, this diminutive model is the perfect addition to your LEGO Star Wars collection!

In the video below you can take a look at the never before seen #10225 R2-D2, the latest exclusive LEGO Star Wars set! Mike and Kurt, the talented LEGO designers who brought this awesome model to life in LEGO bricks, will show you all the details! 🙂

Here are the specs of the LEGO Star Wars R2-D2 set:

And here are some more pictures to drool over:

The LEGO Star Wars R2-D2 set will be available directly through LEGO beginning in May 2012 via shop.LEGO.com and at LEGO Stores.

I really like all the tools and gadgets the LEGO designers packed into R2-D2! They did a good job capturing this feature of the little-robot-with-a-tool-for-everything! I just wish it would be motorized! What do you think? How do you like the Star Wars Ultimate version of R2-D2? Let me know in the comment section below! 😉