We have another LEGO CUUSOO success story! First it was the LEGO Minecraft project, propelled to 10,000 votes by Minecraft fans, and now the Winchester from Shaun of the Dead goes from 1,800 to 10,000 supporters in only a few days – thanks to Simon Pegg speaking about it on the Conan O’Brien show. In today’s post we will discuss how the CUUSOO-project creator, Yatkuu, worked hard to get there. 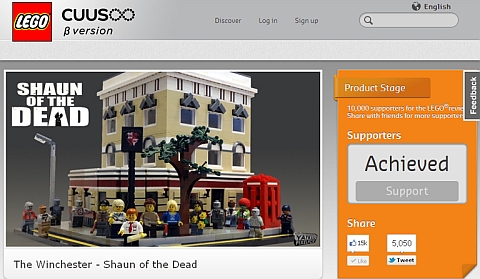 THE WINCHESTER FROM SHAUN OF THE DEAD

I’ve been a fan of the LEGO Winchester since the first day I saw it, and it was one of the first CUUSOO projects I blogged about: CUUSOO – Where LEGO Dreams Come True. I can’t remember how many votes it had then, but it wasn’t very many. While I’m not a huge fan of the movie, I did enjoy it. What I really like about this LEGO project is the sleek design and attention to detail. This is a building that I would love to have on a shelf – with or without zombies – though I certainly prefer it with zombies. 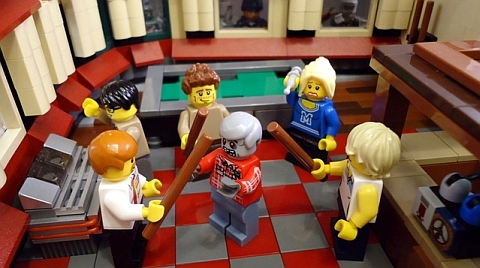 Right after I saw the amazing news that this LEGO project had reached 10,000 votes on CUUSOO, I contacted Yatkuu, the project creator, to give me some insight into how this happened. He gave me a rundown of events from conception to success. Here is Yatkuu’s story:

I had been considering for a while to submit a project on CUUSOO, but I did not want to just post a picture and be done with it. I wanted to give this LEGO project every chance to succeed because I knew upfront that it would be very difficult to reach 10,000 votes.

When I started thinking about making a LEGO version of the Winchester in November of 2011, I had no idea that this build was going to be featured all over the Internet, and go as far as reaching Edgar Wright or Simon Pegg. I just wanted to make a cool LEGO model. The unexpected notoriety of the build gave me the idea to submit it as a CUUSOO-project because I knew it would not rely on a single fan base – appealing to both to LEGO and Shaun of the Dead fans – and that would be its greatest asset. 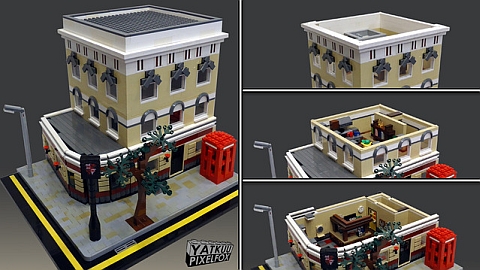 The LEGO Winchester was posted in haste on New Year’s Eve in the middle of the initial media-storm this LEGO project was caught in. I did not really kept track of the supporter-count. I can only tell you that we gained about 250 supporters over the first week so it did not really start super fast, but at that time the attention was on the pictures posted on my Flickr Gallery, not the CUUSOO project.

During the first days I sent out countless emails… I contacted about every blog that talks about zombies, movies or geek stuff. I also reached out to the biggest LEGO communities (Eurobricks, FBTB, Brothers-Brick). That’s also when I got in touch with you guys at theBrickBlogger. I also joined several forums around the theme – Peggster (the official fan page of Simon) Spaced Out (another forum for the fans of Pegg) Frost & Wright, BrickArms, etc. 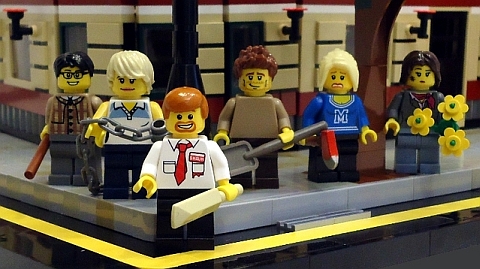 Then, Edgar Wright picked up the story on his blog on January 3rd, Simon Pegg tweeted the CUUSOO link several times starting January 8th ,and we got our first big hit (that’s the second media storm and the first to be centered around the CUUSOO project directly). We gained about 1,000 supporters from it. It’s not that much when you think of it, but I believe the site had technical problems that caused registration issues (bad timing, bad luck).

The story was picked by a few other media-outlets as well. We got 1 page in a February edition of a French cinema magazine that helped us a lot. I also emailed every British Newspaper I could think of in the hope that they would do a paper on the story – since Shaun of the Dead is a classic British Movie; although 1 reporter got back to me, none published anything so far (maybe now they will!). 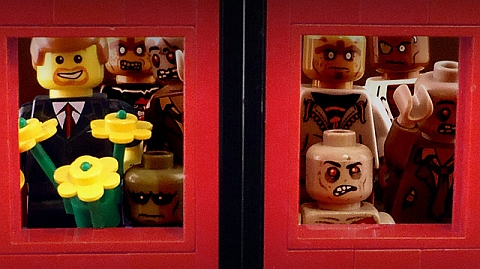 After that, things calmed down a bit. I started thinking of how to keep the pressure and promote the thing seriously. My first move was to reach out to some friends who are more experienced and active than me on social networks. Z-Magazine is the project of a very talented person, Eloise Knapp. I got in touch with her because she needed writers for her magazine and I submitted an article that ended up being published. When I asked her for advice, she is the one who suggested building a promo-website and Facebook Fan Page. She also offered to organize a promotional offer with her Z-Magazine; people supporting the LEGO Winchester could get a free e-copy of the magazine. I quote what she told me; “incentives are great!” I have to say, her help was instrumental in the project’s success.

At that point I also asked my AFOL friend Pixel Fox to partner with me in this LEGO project because I knew I was going to need his mad graphic skills, and also simply because I could not keep up on my own. Together we established a battle-plan; the website, an improved version of the LEGO building, a mini-scaled version of the Winchester, etc. Pixel Fox involvements were planned to be essentially around the creation of a 3D-comic based on the Shaun of the Dead characters and perhaps even a 3D animation – more ways to get the project noticed. At the end the only thing we got time to do was to rebuild the LEGO Winchester in LDD (LEGO Digital Designer) in order to create graphics for the website. Here is the 3D banner for the website:

We did not have the time to do the rest because of the third media-storm that followed the Conan O’Brien show on March 27th, 2012. We reached 10,000 votes by March 31st. But as you can see, we still had ideas to keep the thing going for a little while. We had also planned to shoot a video presentation in order to reach out to the YouTube community. We might still do that depending on how things turn out

If I were to give advice for someone who’s planning to seriously do something on CUUSOO, I would say this:

These are just my own 2 cents. I guess you could do differently and still be successful on CUUSOO because the biggest key factor of all is still luck (and we got a lot of that!).

So, will LEGO make the Winchester? I don’t know, but I sure hope so. If anything, this story made a lot of people happy. The momentum was full of positive energy and it probably brought back into the hobby a few – if not a lot – of people who had forgotten how fun and entertaining LEGO can be, and that’s already an accomplishment. I also got to meet a lot of very interesting people, that also counts for something! 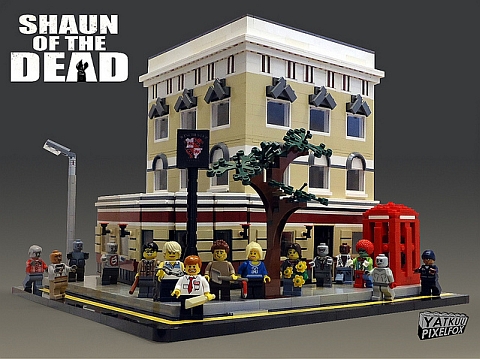 Thanks, Yatkuu, for relaying your story. I think it will be encouraging for others who also want to pursue putting a project up on CUUSOO and getting to 10,000 votes. It’s obviously not easy, but can be a very rewarding journey in unexpected ways. Anyone who wants additional tips, the CUUSOO staff has written a blog-entry on the 7 Habits of Highly Effective CUUSOO Project Owners.

To see all of the media coverage on the Winchester, check out the media page on MakeTheWinchester.com, and there is still a lot of conversation happening on the Winchester CUUSOO Page. Now we have to wait and hope that LEGO makes the LEGO Winchester a reality. If you want to see it happen, I suggest letting LEGO know. Post on the CUUSOO Project Page, blog or Facebook. Not sure what would happen if you emailed LEGO Customer Service, but it never hurts to try. This could be a big turning point for CUUSOO and may forever change the landscape for project creation.

So, dear readers, what do you think of this LEGO CUUSOO project and the process it went through? Are you encouraged or discouraged to create your own CUUSOO project? Do you think LEGO will make the Winchester? Please post your feedback in the comments section below. I’d love to know what you think!

If you would like to learn more about CUUSOO and other great fan-created LEGO projects check here: