How to build LEGO guns that work!

A dream of many kids (and adults) is to build a working replica of a real gun from LEGO bricks. Some do make successful attempts at building LEGO guns, but there is one teen who is the undisputed master of LEGO guns and LEGO gun-building. Today I will introduce you to Jack Streat from the United Kingdom, his LEGO guns, and his new 350 page book full of instructions on how to make working LEGO guns: LEGO Heavy Weapons – Build Working Replicas of Four of the World’s Most Impressive Guns 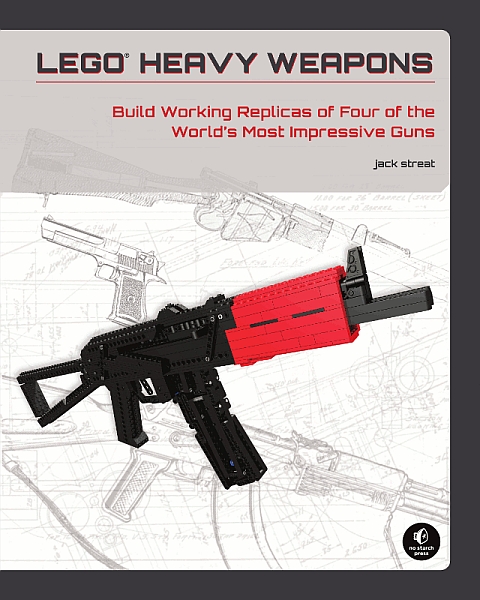 Whether we like it or not, guns are an integral part of our world, and making a LEGO gun is not going to hurt anyone any more than a water-gun or other toy-gun (wear eye-protection though as they really do shoot bricks!) – on the other hand they will enhance your thinking, mechanical and LEGO building skills. So if you are up to a great challenge, why not give it a try? And one of the best ways to start out is by learning the basics of LEGO gun-building from a true master. By the time you finish LEGO Heavy Weapons you will have the skills not just to build the LEGO guns included in the book, but also have the understanding of how to design and build your own weapon-replicas from LEGO. 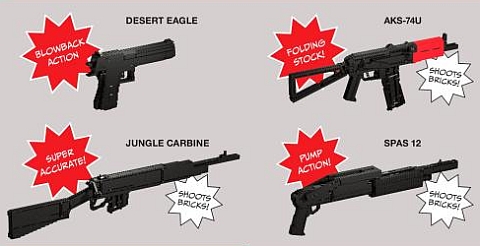 Jack Streat has played an influential role in the LEGO guns builder community since posting his first LEGO gun online at age 13. His YouTube videos and MOCpages postings created a lot of enthusiasm amongst LEGO fans, so much so that he was approached by No Starch Press to ask if he would like to publish a book on the topic. After a lot of hard work the book LEGO Heavy Weapons was born with instructions to build four LEGO guns. Jack is now 17 years old and this is his first book. 🙂

➡ THE LEGO HEAVY WEAPONS BOOK QALITY: You can tell this book means serious business just by its look; it is a big hefty manual – kind of like a shop-manual for vehicles – that is meant to be used and can take some beating! The book is 353 pages and covers the instructions for four LEGO gun replicas: the Desert Eagle handgun, the AKS-74U assault rifle, the Jungle Carbine (a Lee Enfield sniper rifle) and the SPAS 12 shotgun. 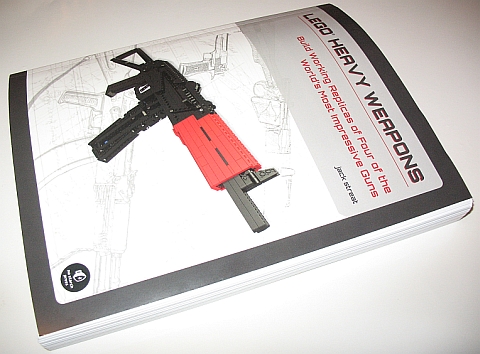 Even though the book is big, the pages lie flat as you turn them – in fact, I have built my own Desert Eagle right on top of the book! The pages of the book have a matte finish, which is easy on the eyes and helps with seeing the instructions clearly with no glare. There are also lots of white spaces to keep the design nice and clean. The color of the instructions is black and shades of gray, which is great for building weapons, however in my opinion the shades could be a tad lighter as the darker colors are hard to differentiate. You do need good lighting to see them well. (Don’t build your first LEGO gun at 10 PM with only a night-light like I did!) 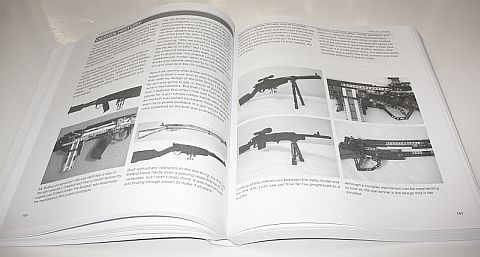 Overall I would say that the book is excellent quality and definitely serves the purpose of an instruction-manual for building LEGO weapons. It looks right and feels right in every way.

➡ THE LEGO HEAVY WEAPONS BOOK INSTRUCTIONS: The instructions to build each of the four LEGO guns are excellent! Jack is not just sharing the building steps, but the thinking, the challenges, and the mechanism behind the LEGO gun designs – thereby giving you the skills to build your own LEGO weapons in the future. There is also a list of parts for each LEGO gun, so you know what you will need to build them. 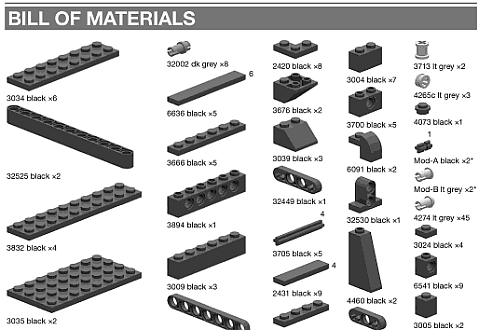 Jack uses a modular method for building-instructions; building sections of the LEGO gun separately (trigger, grip, chamber, barrel, magazine, etc.) then putting them all together at the end. The tremendous benefit of this method is that if you want to modify a particular section of a LEGO gun, you can build or re-build just that module – no need to take apart and redesign the entire LEGO gun. The downside is that it makes the instructions a bit tedious and boring. It took me a couple of hours to build the smallest gun (the Desert Eagle) and as I was building the various modules I kept thinking when will this thing ever going to look like a gun. It was not until step 25 (an hour into building) when I thought, yeah, this is starting to look like something! 🙄 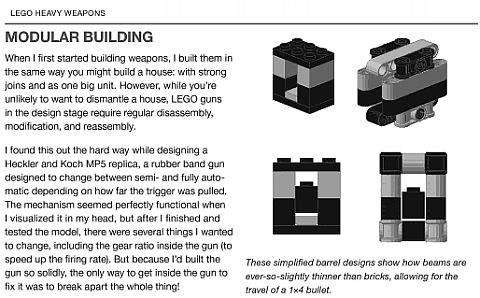 In summary; the instructions are logical and easy to follow, however I would suggest for further publications that, while keeping the modular method for its great benefits, put together a few of the modules earlier in the building steps to give a feeling of achievement in the process. After all; guns are just a big hunk of metal, so anything to make the building process more interesting and enjoyable will help for novices like me. 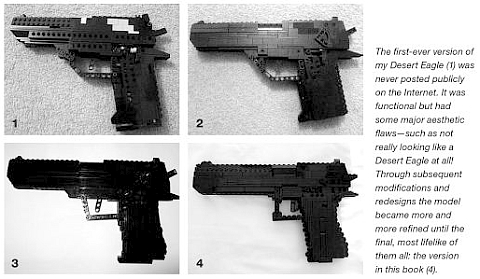 ➡ THE LEGO HEAVY WEAPONS BOOK GUNS: I actually wasn’t planning to build any of the guns at this time, but once I was  flipping through and reading the book I just couldn’t help myself. So I choose the smallest LEGO gun – the Desert Eagle – to build. 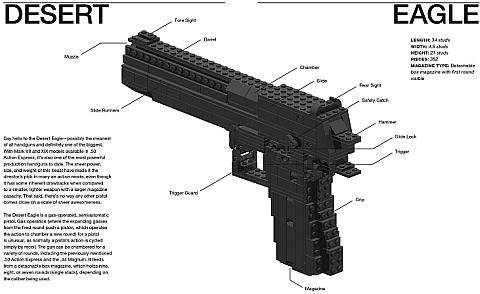 After looking at the LEGO elements I needed I was pleasantly surprised that most of the parts are in fact very common LEGO bricks and plates with a few Technic pieces added for the sliding and shooting mechanism. Even though I don’t own any Technic sets, I had enough Technic pieces to build the Desert Eagle with only a few parts missing. Yes, my LEGO gun is a bit rainbow colored, but the point is that most likely anyone with a medium-size LEGO collection can build these LEGO guns to completion or close to completion, and pick up the missing parts for a few dollars on BrickLink. 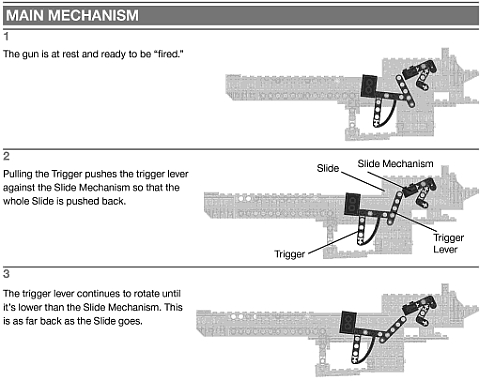 As far as the finished LEGO gun, it is solid, it works, and it does look like the real thing! In fact all of the four replicas are 1:1 scale, so yeah, they could be mistaken for a real gun so be careful carrying them in public! 8)

All four of the LEGO guns included in the book do something; the Desert Eagle has a blowback action mechanism, the AKS-74U has a folding stock (this is an amazing design!) and shoots LEGO bricks, the Jungle Carbine is a real giant and also shoots bricks, and the SPAS 12 has a pump-action mechanism and shoots bricks as well. (See video above for action!)

In summary I would say that this is a must book for LEGO gun enthusiasts; it will greatly improve your weapon-building skills, and give you all the steps to build impressive replicas of four of the most iconic guns. I would suggest the book for older kids because of the complexity of the building-steps and the amount of time needed to build each of the LEGO guns. (The book itself recommends it for children over 12 with adult supervision.) And I would definitely recommend this book for adults; it will challenge you, delight you, and give you the steps to build LEGO models that you can be truly proud of. 🙂

It is wonderful to see such young LEGO fan as Jack create amazing LEGO models, share it with the LEGO community and even publishing his own book! I’m looking forward to see what Jack will make in the future! What do you think? Oh, and I almost forgot to say; this book is not authorized or endorsed by the LEGO Group – for obvious reasons. 😉

Previous post: BrickArms will be in Chicago for Brickworld