One set LEGO Super Heroes fans have been waiting for is the #6873 LEGO Super Heroes Spider-Man’s Doc Ock Ambush. This newest addition to the LEGO Super Heroes line is scheduled for release in August, however Wal-Mart started listing them for sale early. It is currently shown as out of stock on their website (wasn’t available for long!), however they do have some great images I thought to share with you. 🙄 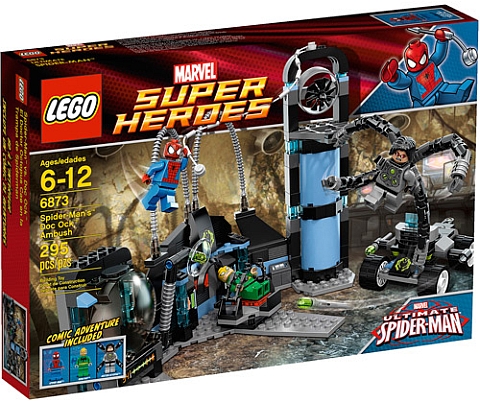 Here is the description of the LEGO Super Heroes Spider-Man set: Scheming Doctor Octopus has captured Iron Fist and is conducting experiments on him, trying to steal his superpowers. Help Spider-Man sneak in through the air-vent and swoop down on Doc Ock to release Iron Fist! Then stop the wicked doctor from fleeing on his missile-firing car! 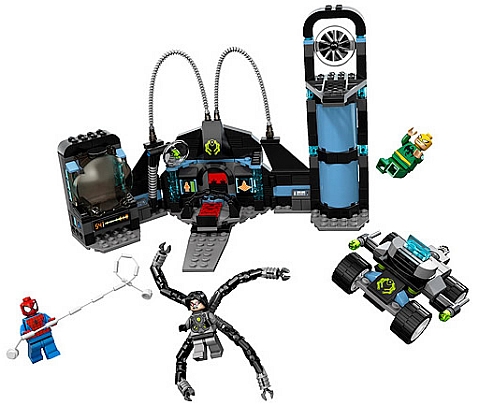 And here are some of the features of the LEGO Spider-Man set:

And here are the three minifigures from the Spider-Man set: 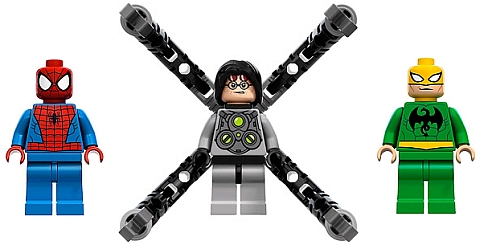 Here is a comparison picture of the LEGO Spider-Man through the years. The first version on the left is the original LEGO Spider-Man from 2003, the middle one is the second version from 2004-2005 (identical to the first version in every way, except for the dark-blue color). On the right is the new LEGO Spider-Man. As you can see; he got redesigned quite a bit, with larger eyes, black spider-webs instead of silver, a smaller spider on his chest, and his belt is now printed on his torso, instead of on the hips. And he got back the original blue color, which I’m happy about. 🙂

So, how do you like the new LEGO Super Heroes Spider-Man set? And what about the minifigs? I like the new Doc Ock better than the original, and I like Spider-Man too, except for his eyes. I think they are a bit too big. Also, I liked the printed belt on the original versions. Iron Fist is a new minifig, and he looks great in my opinion. What do you think? Share your thoughts in the comment section below! 😉

You may also like to check out the LEGO Super Heroes section for more news, pictures, videos and discussions, or choose from the latest posts: