LEGO minifigure looking for a job…

by Thita (admin) on September 22, 2012
in Featured LEGO Creations

Just a little funny to brighten up your day; A LEGO minifigure calls a construction company inquiring about a job. Hilarity ensues when the operator doesn’t realize he’s talking to a LEGO minifig. Check it out! 😛 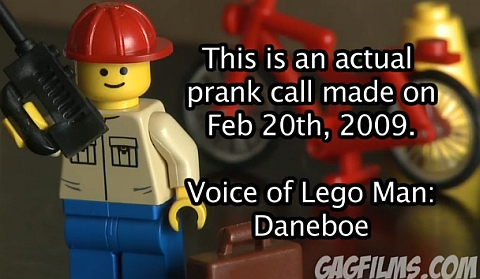 This is a clean and well done LEGO brick-film. Notice that although it is not done as stop-motion, it remains fun and engaging. As you can see LEGO videos don’t have to be that complicated; just have good visuals, clear sound, and a sense of humor and/or suspense. Oh, and no shaky cameras! Nothing kills a LEGO brick-film more than shaky filming! 😐

I bet the operator was scratching his head after the call! He will probably think about it for quite a while. What do you think he will tell his buddies, or his family when he gets home? Share your ideas below! 😉

And if you like LEGO films and LEGO animation you may want to check out the following previous posts: