We have featured several wonderful LEGO creations and experiments by Sean and Steph Mayo (a.k.a. Siercon and Coral), and today I would like to show you one of their latest ideas using the LEGO color-palette and your computer’s ability to invert colors. 🙂 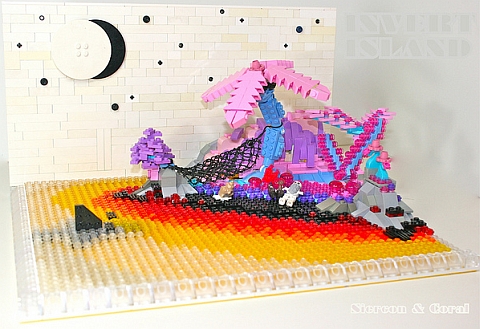 The LEGO diorama above is called Invert Island, and for a good reason. As you can see the colors are all strange and unnatural… should we say ugly? However if you invert the colors on your computer screen, you will see the whole scene magically turn into natural colors! To see the effect hold the following keys on your computer’s keyboard:

There are other ways to invert colors on your screen in case the above method doesn’t work. (For example some smaller computers have the Print Screen option missing from the keyboard.) You can still invert colors, but you may need to do a little research on how to do it on your specific device. Inverted colors are usually used in low contrast situations, or by the visually impaired. So just in case you have trouble with this step, I’m also including of what you suppose to see once you hit the magic keys. 🙄 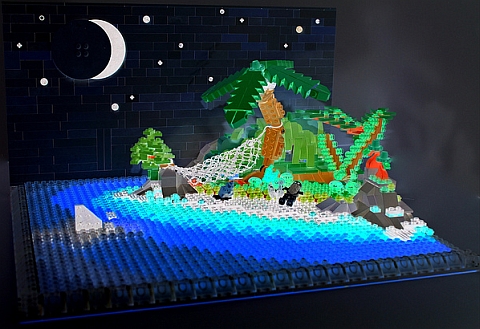 Clever, isn’t it? Just look at that beautiful starry sky! And the water effect also turned out nice. Oh, and those hideous pink and baby-blue trees are now lovely shades of green. Also note the LEGO skeleton. Sean and Steph shares that they choose to go with a white skeleton in the original diorama, because using a black skeleton merged into the sand too much once the colors were inverted. Just a fun little detail…

I have no idea how Sean and Steph think up stuff like this, but I believe this method has great potential for further experimenting by those who are willing to think outside the box. What do you think? Share your thoughts in the comment section below! Oh, and before you start to worry that your computer broke or something, just hit the same keys to revert your screen back to normal. 😉

You may also like to check out some of the other works of Siercon and Coral:

Next post: LEGO shopping: the myth of Toys’R’Us deals