Since it seems there won’t be any more LEGO Ninjago spinners next year – only six new sets or so – I thought it might be a good time to review all the ninja’s Character Cards, including Lloyd’s. In 2011 there were two different versions of each ninja (and no Lloyd).  And in 2012 there have been three upgrades, plus a new ninja, Lloyd – although Lloyd has only had two costumes. 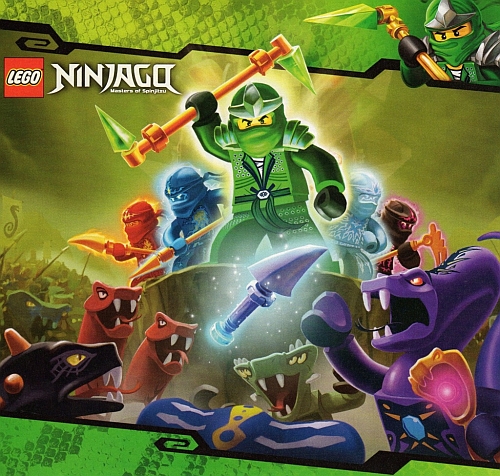 ➡ KAI, NINJA OF FIRE! – Kai is the only ninja to have a spinner for every version (except, of course, next year’s Kimono version). In fact, there have been no fire booster-packs at all! Each ninja (except Lloyd) has had five upgrades so far, and above are Kai’s; Normal, DX, Kendo, ZX, and NRG. The coolest is probably NRG Kai, but Kai ZX is a much better character as far as SP (Spinjitzu Power) goes! It’s interesting that all of Kai’s cards have one star except Kai DX – and that is the only ninja Character Card (including Lloyd) to have three stars. It’s also the only one of Kai’s cards not shown in the Character Card Dictionary on Ninjago.com! Just for fun, I figured out the amount of SP Kai would have if you took the lowest of each element: 300 Fire, 200 Lightning, 0 Earth, and 0 Ice – so you could say that his “base power” is only 500! (Click on pictures for larger view.)

➡ JAY, NINJA OF LIGHTING! – Between Kai and Jay, we seem to have gone from one extreme to the other – if Kai had no booster-packs, Jay seems to have almost entirely booster-packs – meaning no spinners, and even missing some Character Cards! Normal Jay did have a spinner, and so does NRG Jay, but Kendo Jay and Jay ZX were booster-packs, and Jay DX has no Character Card at all! NRG Jay has an awesome Character Card, and in general, all Jay’s cards are really superb.  His “base power” is 500 as well, but it’s divided like this: 0 Fire, 300 Lightning, 0 Earth, and 200 Ice.

➡ COLE, NINJA OF EARTH! – Cole seems to have got the numbers right; he has one booster-pack, one of his spinners comes in a Spinjitzu Starter Set, and the other two come in spinners all by themselves. Personally, I think Cole is a bit plain in black, but his Kendo Character Card does look nice, and the dragon at the background of the Cole DX card is one of the coolest! Two of Cole’s Character Cards have two stars, so he seems to be doing pretty well with that – whatever the stars mean! And of course, if there were such a thing as “base power”, he would have 500 like the rest of the ninja (except Lloyd), with 200 Fire, 0 Lightning, 300 Earth, and 0 Ice.

➡ ZANE, NINJA OF ICE! – Zane, like Cole, has two cards with two stars. It’s also interesting that four out of his five cards use the shurikens as his weapon in some way or another – the only exception is his DX version, where he has a nunchuck. His NRG card is awesome, as it looks like he is surfing on waves of ice right out of a beautiful sunset! Zane ZX also looks great, but I found it hard to tell whether the white specks floating around Kendo Zane are flowers or snowflakes. Naturally, his “base power” is 500, with 0 Fire, 0 Lightning, 200 Earth, and 300 Ice.

➡ LLOYD, NINJA OF… EVERYTHING! – Lloyd, who later becomes the legendary Green Ninja, has only two different character cards; one with him as a “bad boy”, back when he was the “future dark ruler”, and the other as the Green Ninja who suppose to defeat the Dark Lord. Both Character Cards look fantastic, but I like his first one better (I like purple). Both cards have one star, and his “base power” would be 200 Fire, 300 Lightning, 200 Earth, and 200 Ice – a total of 900 SP! Of course, he has an advantage in having only two character cards… Another funny thing about him is that his ZX card is number marked as number 1 amongst this year’s cards, while his other card is number 25, the last of the Character Cards! Plus, he has more SP than any of the other ninja! 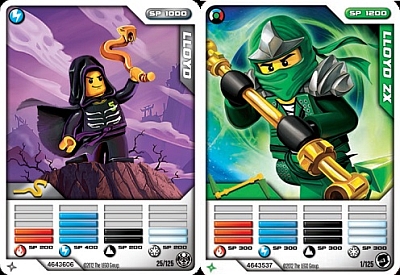 So how do you like the Ninjago Character Cards? Which one is your favorite? Do you collect any of the ninja? Feel free to share your thoughts and discuss in the comments section below! 😉