In the recent LEGO Club Magazine there is a hint to a new LEGO theme called LEGO Galaxy Squad. At the end of a two-page LEGO Monster Fighters story a new enemy in introduced as follows: “The world is safe again… for now! What is this newest threat??? Get ready to defend the Universe from extraterrestrial pests with Galaxy Squad!” And here is the image from the story introducing the new enemy: 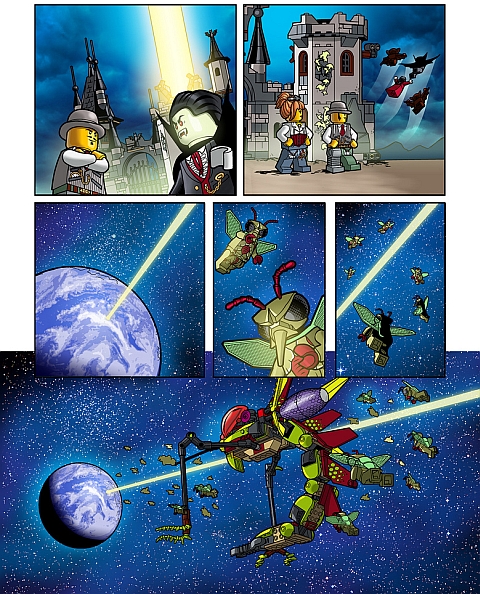 Of course LEGO forums and blogs are abuzz with the news, especially since the LEGO Galaxy Squad theme was not mentioned in the original 2013 LEGO sets list. Speculation has been that Galaxy Squad is going to be a 2013 summer theme, but since the image appeared in the latest issue of the LEGO Club Magazine, it could very well come as early as April. 😉

The LEGO Galaxy Squad theme appears to be similar to LEGO Insectoids from the 1990s, with insect-like vehicles. Basically we are dealing with a galactic pest-control team trying to get rid of swarming insects from outer space. If you ever had to deal with an insect-problem you know how persistent those nasty buggies can be! You definitely need advanced weapons and powerful missiles to get rid of them! 🙄

There is a lengthy discussion over at Eurobricks about this new 2013 LEGO theme, so if you are interested I would suggest you check it out. Below I will just list some of the upcoming sets mentioned there:

➡ #70701 LEGO Galaxy Squad Swarm Interceptor: here we get a guy named Solomon Blaze, the leader of the Blue Team from pest-control, who is apparently fighting a mosquito-like alien with advanced weapons. Two minifigures are included; Solomon Blaze and alien mosquito.

➡ #70702 LEGO Galaxy Squad Warp Stinger: here Billy Starbeam, leader of the Red Team is dealing with another oversized space-mosquito. It appears that the humans are using robots the help with pest control as the 3 minifigures included are Billy Starbeam, a robot with jet-pack and an alien mosquito with wings.

➡ #70704 LEGO Galaxy Squad Vermin Vaporizer: now we are dealing with a serious pest problem; a space-scorpion! The green team has to be called in with Chuck Stonebreaker as the leader. Includes 3 minifigures;  Chuck Stonebreaker, green robot and alien scorpion.

The picture in the LEGO Club Magazine gives you a good idea about how the insect vehicles and insect minifigs will look like. The mosquito above is basically a cross between the LEGO Toy Story Twitch and the LEGO Super Heroes Beetle characters – the other alien minifigs will probably be something similar; minifigs with unique heads-moulds.

However there is no picture of the Galaxy Squad as of yet. From the description above it is clear that there are color-coded teams – Red, Blue, Green and Orange – to fight the various insects. There are also robots. Whether these robots will be minifigures or perhaps something brick-built is not known at this point. There is a concept-drawing on Brickshelf that may give a hint, but at this point nothing more is known. Check the above mentioned Brickself folder as there are a few more interesting images. 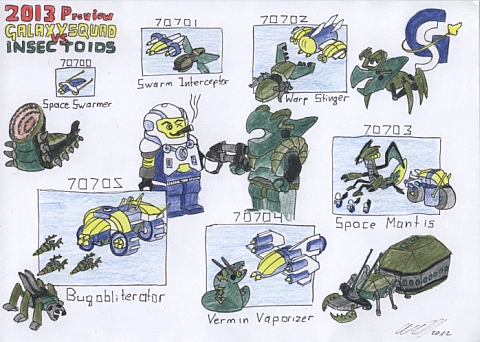 So what do you think of this new 2013 LEGO theme? Are you interested in LEGO Galaxy Squad? How do you like the concept so far? Feel free to share your thoughts below! Also, if you hear of any updates on this new theme, you are welcome to share that as well. 🙂