How to make LEGO guns – The BrickGun Book

Guns are a sensitive and relevant topic these days, which is beyond the scope of a LEGO blog, but the fact remains that for both kids and adults making a realistic gun using LEGO elements remains a popular pastime and interesting challenge. LEGO guns, like toy-guns in general, won’t hurt anyone and they definitely enhance your mechanical and LEGO building skills if you are inclined to tackle them. 🙂 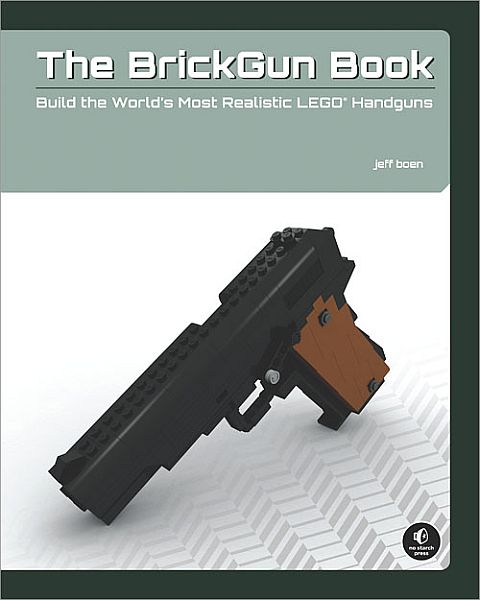 Just about a year ago I introduced you to a very detailed LEGO book on making realistic and even working LEGO guns written by Jack Streat focusing on heavy weapons (see: How to Build LEGO Guns That Work!). Today I would like to show you a LEGO book by another talented LEGO gunsmith, Jeff Boen, featuring handguns. The book is called The BrickGun Book – Build the World’s Most Realistic LEGO Handguns 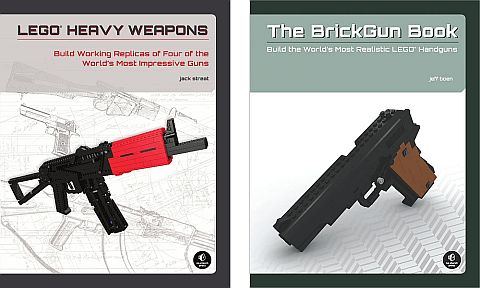 Jeff Boen snapped together his first LEGO pistol in under two hours. The Texas-based web-developer designed it solely from his memories of movies and video games, then decided to improve its design by borrowing a friend’s 9mm Beretta for reference. Soon he had a functional LEGO model complete with a working trigger, hammer, and slide. Confident he’d created the most realistic all LEGO handgun to date, he posted pictures of it to the LEGO Users Group Network (LUGNET). A few weeks later, he was shocked to see that his page – which typically got about 20 visitors a week – was receiving 8,000 hits a day. Boen’s LEGO Beretta had gone viral. 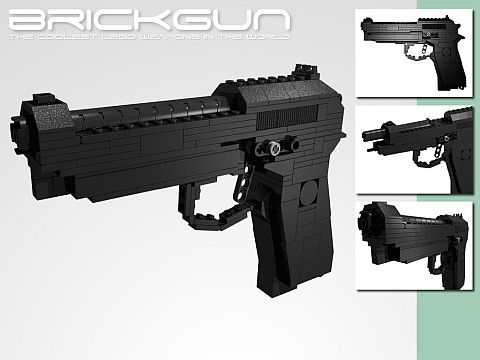 Suddenly Jeff’s extraordinary LEGO gun was in high demand. Requests for the design poured in from all over the world, and a Finnish rock band put its image on their album cover. Beretta Inc. itself sent Boen an email describing his LEGO 92 Series as “beautiful,” and he learned that it was being featured on several of the iconic gun manufacturer’s fan sites. After years of innumerable requests for more replicas, Boen went pro, combining his lifelong passion for LEGO and his tremendous admiration for well-made firearms into BrickGun.com. 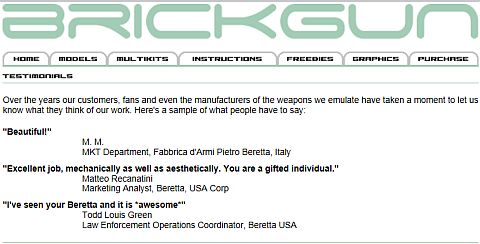 The web-based company now produces LEGO kits and instructions for building nearly a dozen classic handgun models, all made out of standard LEGO parts. His brand has become known for both the ultra-realism of its replicas as well as their simplicity. “Our LEGO models are true to life in that way,” Boen says, recalling the first time he saw a friend’s Beretta 84FS Cheetah. “He’d never dismantled it, but I was able to do so in seconds. It amazed me how simple the firearm was when broken down into components. I’d heard that Berettas were the most efficient handguns in the world, and at that moment I could see why.” 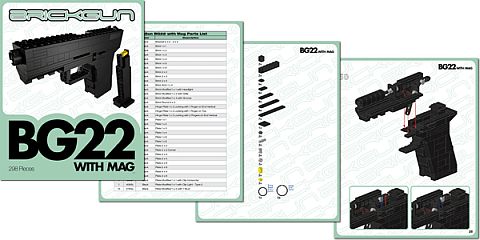 In 2011, the IT-guy-turned-model-gun-designer decided to package his five most popular LEGO models into a comprehensive builder’s guide for hobbyists, thus The BrickGun Book was born to the delight of Jeff Boen’s many fans. The model that started the madness, his Beretta 92FS, is included, as are other popular models with working mechanisms, such as the BG22 with loadable magazine and the rubber-band-shooting MAC-11. Boen’s signature commitment to detail and accuracy is obvious in the instructional diagrams, and the finished models feature functional triggers, hammers, slides, and safeties. 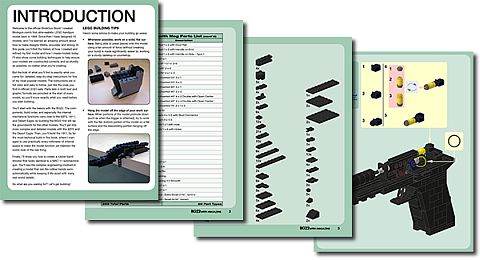 “Some people just put these LEGO guns on a shelf, but they’re actually a blast to play with,” Boen says, before noting: “I guess this is the point where I remind everyone that, harmless as they are, BrickGuns are not toys. But, man—they sure are fun.” Please note that adult supervision is required with all of the LEGO guns featured in the book. The models are not suitable for children under the age of 12. The MAC-11 shoots rubber bands. When firing the MAC-11, always wear eye-protection. For maximum safety, carry the MAC-11 unloaded. A LEGO replica may fire when dropped or hit. Be particularly careful when handling these models in public because they have been mistaken for real weapons. If you take your LEGO gun out in public add a bright orange tip to the muzzle to show that it’s not the real thing. 🙄

Below I will review The BrickGun Book’s quality, the instructions for building the LEGO guns, and the LEGO guns themselves – so read on…

➡ THE BRICKGUN LEGO BOOK QALITY: This LEGO book is also published by No Starch Press, just like the previous LEGO gun book, so you know the quality is excellent with glossy pages that can take some beating, large text that is easy on the eyes, and vibrant colors. The book is 222 pages and covers the instructions for five LEGO gun replicas: the BG22 semi-automatic pistol with magazine, the 92FS Beretta, the Desert Eagle, the 1911 classic semi-automatic pistol, and the MAC-11 rubber-band shooting small sub-machine gun. 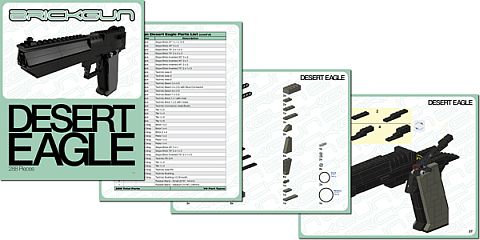 ➡ THE BRICKGUN LEGO BOOK INSTRUCTIONS: The instructions to build each of the five LEGO guns is similarly laid out as the steps in LEGO’s own instruction manuals. First there is a parts-list in a spread-sheet format describing exactly what you need. Then there is a visual parts-list in case you are not familiar with LEGO part-names and would prefer a more visual reference. Then there are step-by-step instructions to put the models together. Here I would like to mention that one of the nice things about building LEGO guns is that the parts needed are quite basic. If you have a decent LEGO collection you can most likely put at least one of the models together without much difficulty. And if you have parts missing you can always get them from Bricklink or directly from LEGO. 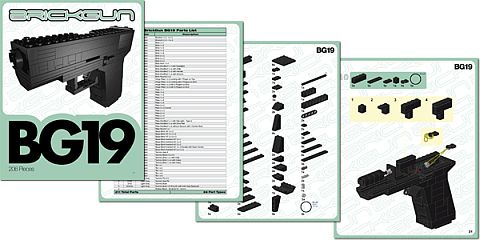 ➡ THE BRICKGUN LEGO BOOK GUNS: Jeff has gone through painstaking work and many-many revisions to make these LEGO guns as accurate as possible. (You can read more about the history of each LEGO gun and Jeff’s thinking process in improving them at the beginning of the book.) Interesting to note that both Jack Streat in the previous book and Jeff Boen in this book made a Desert Eagle model, so you can build them both and decide which one you like best. All of the five models featured in this book have some unique details and mechanism that would make them a great building and learning experience; including working trigger, hammer, slide, slide-lock, magazine, etc. 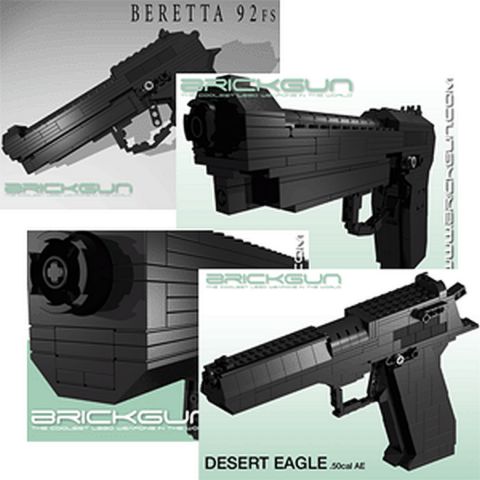 In summary I would say that this is a must book for LEGO gun enthusiasts, and I would highly recommend it along with the LEGO Heavy Weapons book. Either or both of these two books will greatly improve your weapon-building skills, and give you all the steps to build impressive replicas of some of the most iconic guns. (By the way the two books are the same size and shape with matching covers – if such things are important to you.) I would suggest the book for older kids because of the complexity of the building-steps and the amount of time needed to build each of the LEGO guns. (The book itself recommends it for children over 12 with adult supervision.) And I would definitely recommend this book for adults; it will challenge you, delight you, and give you the steps to build LEGO models that you can be truly proud of. 😀

So what do you think? Did you get the previously released LEGO Heavy Weapons book and tried out the models? Are you planning to add The BrickGun Book to your collection? Feel free to share in the comment section below. Also, if you have any questions just let me know. I have built some of the guns myself. 😉

And you can check out the LEGO Books section, or read the review on the LEGO Heavy Weapons book here: How to Build LEGO Guns That Work!