by Thita (admin) on September 4, 2013
in LEGO Customizers

LEGO customizer BrickForge came out with some really nice printed elements I thought to share with you today. BrickForge is one of the most prominent LEGO customizers with a huge range of accessories for your LEGO minifigs in a wide variety of colors and styles. Today I would like to show you BrickForge’s new custom LEGO S.T.A.R. Patrol line of accessories. 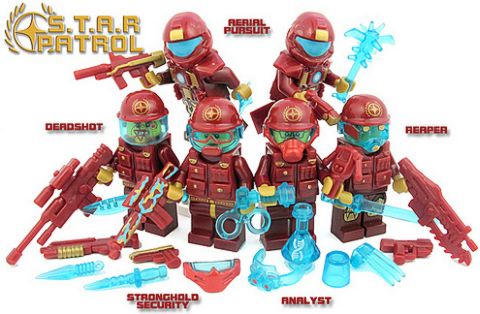 S.T.A.R. Patrol is a galactic team comprised of six different characters – or Super Soldiers – whose mission it is to protect key areas of the Solar System. Here is what BrickForge customizer Armothe says about the theme: “S.T.A.R. Patrol is reminiscent of the early 80′s toy themes; I’m also a fan of the new STAR Citizen Kickstarter campaign. I was shooting for a ‘Red Planet’ type concept where the characters needed some sort of Hydro-Cooling tank on their backs to survive the dry, arid temperatures of their base planet. The Dark-Red, Gold & Trans-Light-Blue color-scheme really made sense.”

In case you are not familiar with Star Citizen, it is an upcoming and super exciting PC space-simulator being developed by Roberts Space Industries and was crowd-funded through a Kickstarter campaign. It will feature an online multiplayer as well as a single-player story. Here is a video with a bit more explanation:

BrickForge’s accessories are perfect for equipping your Galactic Soldiers – both those that are based on video-games, movies and LEGO themes (in fact they also have a really nice assortment of printed accessories for the LEGO Alien Conquest line), and those that you imagine yourself.

What I like about the S.T.A.R. Patrol custom LEGO accessories is that you can create a whole team of soldiers with matching equipment and armor, yet also provide a nice variety amongst them. In otherwords you can build an awesome team of heroes! I also like the dark-red with the gold printing, which (as you see in the first picture) is a perfect match for the LEGO Iron Man minifigures, so you can easily transform your Iron Man minifigs into Galactic Soldiers.

All of the S.T.A.R. Patrol Character Packs are currently available at BrickForge’s Online Shop under the Accessory Packs section, as well as though authorized resellers. You can even buy the Squad Assortment and get a discount (basically buy 5 packs and get one free). And of course you can also check out many of their other accessories. 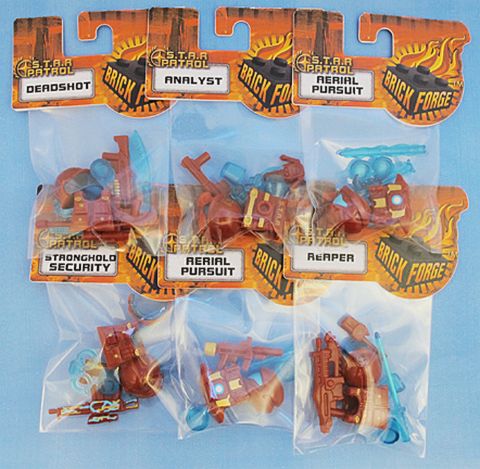 So what do you think? How do you like the BrickForge S.T.A.R. Patrol concept? And what do you think of their printed accessories? Feel free to share your thoughts in the comment section below!