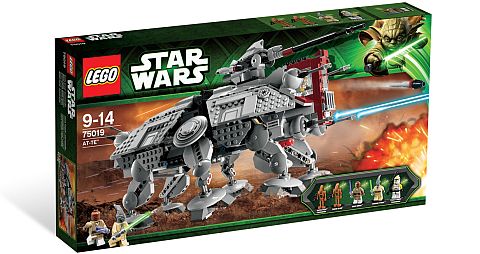 First of all here is the official description of the #75019 LEGO Star Wars AT-TE from LEGO’s website: Win the Battle of Geonosis with the AT-TE! As the Battle of Geonosis rages on, the clone commander boards the heavily armored LEGO Star Wars AT-TE with Jedi Masters Mace Windu and Coleman Trebor. Take them deep into the battle with the AT-TE’s lifting handle and cool poseable legs. Open the cockpit to put a minifigure behind the wheel, then fire the 2 moving laser-cannons and rotating top-mounted projectile-cannon with dual flick-missiles! Lift the top hatch for extra flick-missiles! Climb the access-ladder through the opening rear hatch to reach the cargo box with thermal detonators. Lead every LEGO Star Wars battle with this ultra-tough space tank. Includes 5 minifigures with weapons: Battle Droid, Battle Droid Commander, Mace Windu, Coleman Trebor, and a Clone Commander. 794 pieces. Price: $89.99 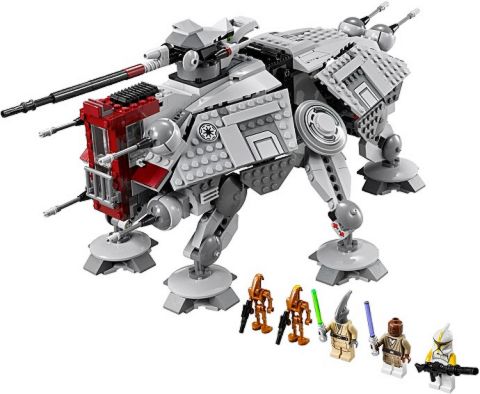 Now let’s look at the minifigures in a bit more detail. There are the two Jedi: Mace Windu with a purple lightsaber and Jedi robes, and Coleman Trebor with a green lightsaber and a dinosaur-like head-piece (even though he died before the clones came). The third minifig is the Clone Commander, who fits perfectly into the cockpit and has a pretty neat weapon. He has the Episode II clone face, which is new for 2013. The last two minifigures are the battle droids, coming straight from the Geonosis droid factory. They have a very nice dark-orange color, and the Droid Commander has some yellow markings to show its rank.

As far as the LEGO Star Wars AT-TE walker itself, it is a very well designed model with lots of details and functions. The front cockpit where the Clone Commander can sit slides out very smoothly, and when out, you can see the little stick pieces that make up the controls. The gun on top of the AT-TE can fit another minifig (I use a clone from a previously released LEGO Star Wars battle-pack). If you lift up that compartment, there are four extra flick-missiles; 2 blue and 2 green, which are very useful in a heated battle. At the back compartment there are two gun holders and a box that holds two thermal detonators. The compartment can also hold two minifigs. 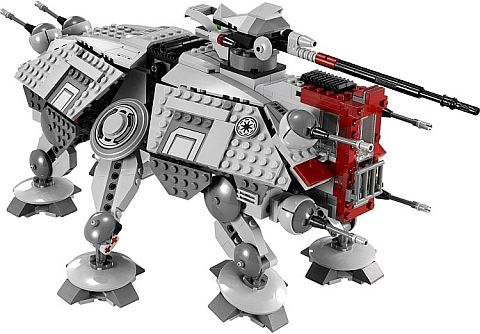 The legs of the AT-TE are done really well; the front and back ones have to be in a certain position, but the middle ones just kind of dangle, so you don’t have to worry about positioning those. It is the legs that the model is named after; All Terrain Tactical Enforcer, because the feet move you can have it climb up and over objects in its path. One of the best bit of the AT-TE is the handle; you can fit two fingers on it – one either side – and imagine that a LAAT (Low Altitude Assault Transport) is carrying it. 🙄 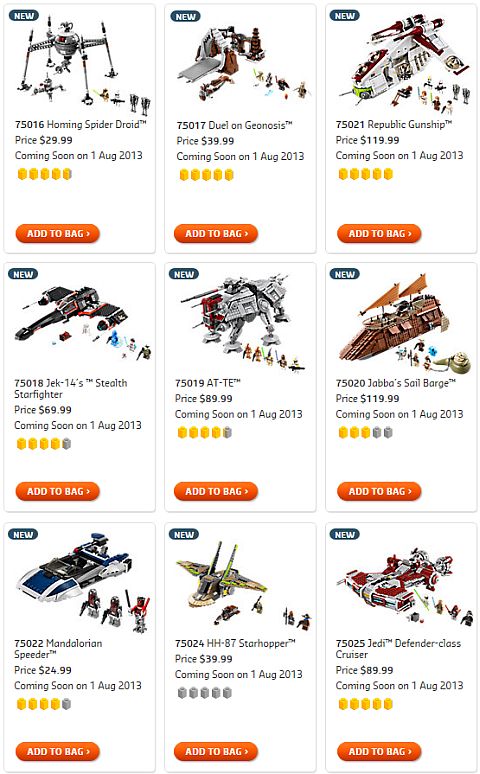 As I mentioned at the beginning this is my favorite LEGO Star Wars set in this wave, and in fact one of my most favorite LEGO sets. What do you think? How do you like the LEGO Star Wars AT-TE? Is there another recently released LEGO Star Wars set that you prefer? Feel free to share in the comment section below! Also, I’m a TFOL (Teen-Fan-of-LEGO) and this is my second article here at theBrickBlogger. You can read my first post here: LEGO Galaxy Squad Eradicator Mech Review. Thanks for reading! 🙂

Next post: Guide to feeling for LEGO Minifigs Series 11