In this Brick Breakdown series I review official LEGO sets, from the perspective of looking at interesting building techniques we can all learn from. Today we will be looking at the #70811 The LEGO Movie Flying Flusher. You can also check out the previously discussed LEGO techniques found in official LEGO sets at the end of this article. So let’s begin! 🙂 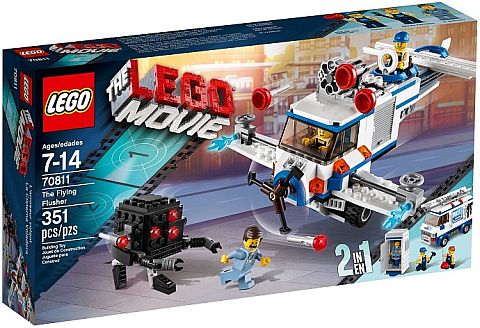 One of the running themes of The LEGO Movie series is the 2-in-1 builds. Take for instance the box image; it shows a plane that looks like it was assembled with plumbing supplies. But in the corner there is a hint of an outhouse and plumbing-truck. This ultimately gives you two takes on one set. The first is from the whimsical world that will be characterized by The LEGO Movie; anything is possible to build, it’s just a matter of your imagination. The other side of the coin is for those who are traditionalists and want realistic LEGO models. 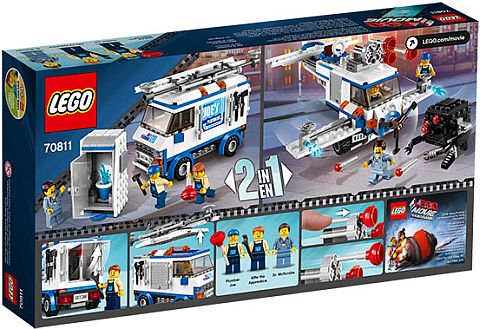 The outhouse and plumbing-van are surprisingly straightforward with no strange gimmicks like flick-fire missiles. If you want strange, it’s in the alternate version. No matter which model you build though, they are both excellent. And before we talk about the techniques in this set, I do want to point out one thing with the instruction booklets. Booklet #1 makes the Micro Manager robot (the square black robot). Booklet #2 will give you instructions for building the plane. The third booklet with the plumbing-van is not labeled, but if you do want to make it, it replaces Booklet #2. So in either case you can leave Micro Manager robot together.

Taking a look at the Micro Manager robot’s legs and feet is a real treat. It is not often to see LEGO parts fold up this tiny and still be functional. This entire assembly is possible due to a couple of factors. The first is the locking finger-hinges. Most LEGO hinges are fluid in their movement and could swing freely. The locking-hinge however gives us the ability to create fixed angles. An other factor which makes the folding-legs functional is the strengthening of the joints. This means that the thin, fragile connection-points can now hold some weight. Granted; you don’t want to overtax their capacity, but as long as you keep the weight to a reasonable level you can make the legs work quite nicely. 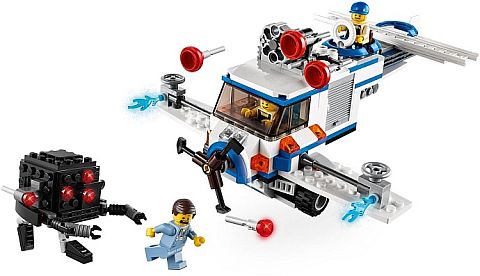 Also, the folding of the legs work because of LEGO’s ability to hinge at 90 degree angles. Given the square nature of LEGO, the most natural spiral that can be formed comes from a series of 90 degree angles. Why are spirals important? Simple; they are the most efficient way of folding something up. Take for example a cloth towel.  Folding it into squares is nice and tidy, but makes the towel long and flat. However, if you roll that same towel into a spiral it redistributes its mass equally between its width and its height. Now take that same towel and fold it into tiny squares. You’ll notice that it is not as wide, but it gets taller. Spirals will never be the widest or tallest, but they will be as small as you can make an object in both directions. Check out the set yourself to get an idea of what pieces to use to accomplish this.

One of my favorite parts of this The LEGO Movie set is the toilet. It manages to capture so many fine details in a relatively tiny design. This is in part thanks to the various odd elements used in the construction; a minifigure basket in blue, a life-preserver and a round sign in white make up the three distinct elements of the potty. The problem is that these pieces don’t naturally fit together. The basket is meant to go around a minifig’s neck, and the life-preserver and sign both need a bar to attach to but in different ways. So what is needed to pull these three parts together is some kind of a mounting device. In this instance it is a 1×1 round LEGO brick with a 4L bar in it. The round brick provides a stud for the basket to wrap around, the bar goes through the hollow stud of the life-preserver, and the sign has enough room to clip to the upper portion of the bar. Few parts, really brilliant applications! 😀 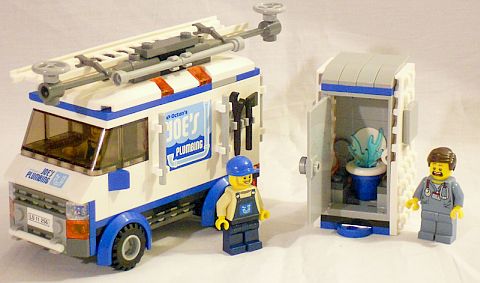 As you can see, a good mount provides all the proper connections for all the parts that need to go together in the most efficient way. Other qualities you want in a good mount is that it is easily hidden and can be moved out of the way, it is stable (which usually means you want to use as few parts as possible), and that it looks like it naturally belongs to right where it is. The mount for the toilet in this set does all three; it is efficient, it is hidden inside the wall, it is very stable (made of only two, well-connected parts), and it looks quite like plumbing pipes that fits right into the setting. 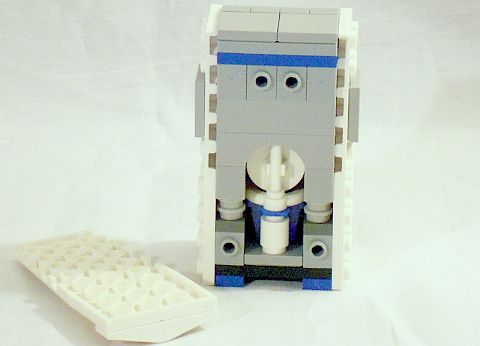 The technique of folding does not always have to come in the form of a spiral. You have a wide range of LEGO hinges at your disposal to use. Perhaps scissoring where you have two Technic bricks side-by-side with a pin creates the right shape for your fold. It is rare to see a spiral fold done with LEGO, so take the opportunity to study it when it’s done right.

Mounts can be used as a core structural design for a LEGO model. But more often than not they are needed for detail work like you see in this set. They are the facilitator for elements that just aren’t normally put together but could provide interesting shapes. Whatever you do, try to keep your mounts as simple and unassuming as possible. This streamlining will help with hiding and stability which is half the job with a great mounting device.

So what do you think? How do you like The LEGO Movie sets and the techniques we discussed here? Have you come up with a clever mounting device to connect different parts? How about mechanisms to fold away parts of your model in the most efficient way? Feel free to share your own experiences, tips or ask questions in the comment section below! 😉