When I first heard about the first LEGO Minecraft set I was immediately intrigued. In fact it got me into playing the Minecraft video-game before the LEGO version was officially released. Many people claim that Minecraft is the video-game version of LEGO, and it is easy to see why; both brands focus on taking rather mundane elements that can be used to make complex designs. The process for doing this is a bit different, but essentially the goal of the game and the toy is to create something you are proud of. Given this premise, it was an interesting experiment when the two concepts met in an actual LEGO set. After building the first LEGO Minecraft set I have to admit that it did incorporate well some very unique techniques and concepts from the game.

The first of the techniques we will be looking at is what I refer to as pan-modular – meaning that the different elements of the set can be modular in nearly every direction. Let’s start with the underground segments of the LEGO Minecraft sets; each segment represents a square module of building potential. It can be rotated 90, 180, or 270 degrees and still fit into the design. In addition, if you want a deeper section of terrain you can even stack the underground modules on top of one another – essentially making them able to connect and reconnect on six different sides.

The top terrain sections are a little less modular when it comes to stacking, but they still have a great deal of modularity. They can also be rotated 90, 180, or 270 degrees, and can also be swapped around to be stacked on other underground modules.

The end result is a set that can be modular exponentially with a simple swap, rotation, or stack of the different sections, which all comes from its cube-shaped design-frame. By treating each part of the model as a self-contained element and allowing for connection-points in the same place, what you end up with is oversized LEGO elements! 😀 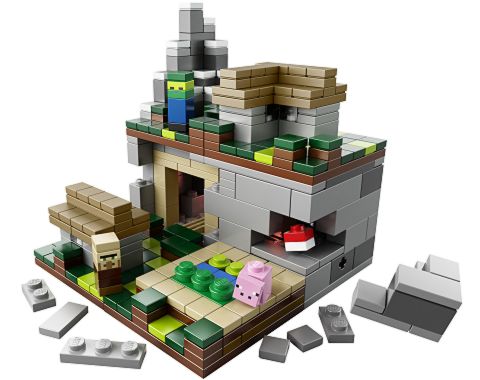 Just think about it; a LEGO brick is nothing more than an element that can be moved around and fastened into different places. Each module you build in the LEGO Minecraft set works essentially the same way; they are blocks to be moved around and attached at various ways using connection-points.

First of all, the LEGO Minecraft sets come with a whole bunch of extra pieces. These are practically begging to be used and incorporated in the setup of the Minecraft terrain. And given the micro-scale of the sets and how the different elements are represented, it is not difficult to add something that looks like it belongs. This is all thanks to having a simplistic design-model. Note how even the figures are nothing more than a printed face on a couple of bricks! 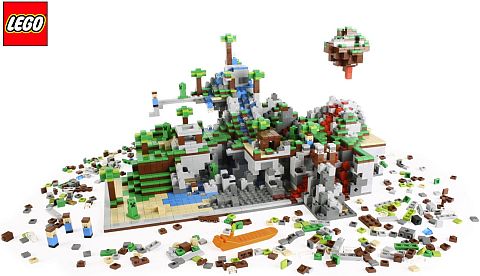 When blocks represent entire landscapes or buildings, you can dismiss the need for carefully crafted details to represent real life objects or landscape elements like you would likely do on a larger scale. In addition, when you are not worried about making moving elements like wheels, the ability to design becomes much more straight-forward. Essentially the LEGO Minecraft sets give you the freedom to experiment as found in the Minecraft game itself. As a technique, this reduces any hesitation you may have in taking apart the original models and creating your own remarkable designs.

The ultimate goal of the LEGO Minecraft sets is to recreate an experience Minecraft fans have in the video-game. The pan-modularity gives them the random world design of the game as well as the ability to spawn a completely unique world. And the built-for-destruction mindset captures the freedom to create the same way as the game would offer – giving an even playing field for designers. In fact too detailed models won’t even fit into the Minecraft design! So what you end up with is a building experience, rather than a traditional LEGO set that you feel like you need to keep together.

As for using the techniques in other LEGO creations, having a pan-modular design could offer some interesting opportunities. The issue is that for it to work seamlessly, you really need to come up with a basic unit to have everything relate to. This can ultimately be a major restriction by forcing you to consistently stick with that unit of design. If you do plan to use this technique, I recommend starting with a cube – like what the LEGO Minecraft sets use – before challenging yourself with something even more complex.

And when it comes to the building-for-destruction technique, it is better applied as a philosophy in your LEGO creation process. What you want to take from it the most is that your LEGO models should remain a fluid creation that does not need to remain stuck in one shape and form. You and your creations are meant to evolve time and time again. Only by keeping this principle in mind can you achieve improvement in anything you build.

So what do you think? How do you like the LEGO Minecraft sets and the techniques we discussed here? Have you applied the unique modular design of the sets in other ways? And did you experiment with the sets to build them up differently? Feel free to share your own experiences, tips or ask questions in the comment section below! 😉