You may remember that recently we talked about a new set of accessories by BrickForge, one of the most prominent LEGO customizers (see: Custom LEGO WWII Items by BrickForge). These items are actually part of a brand new product-line introduced by BrickForge called the RiGGED system, which allows LEGO fans to design and decorate their minifigs in a lot more creative ways than before. A second set of accessories have been just released within the same line, so I thought to write an update. 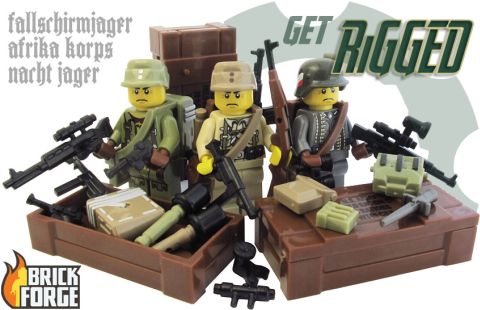 According to BrickForge’s blog, RiGGED stands for: Rapid – Interchangeable – Guns – Gear – Equipment – Design. The RiGGED system is a type of MMA (Modular Minifigure Accessory) structure and consists of traditional 3mm & 1.5mm peg & hole combinations integrated into quality ABS minifig accessories. Armors, belts, straps & other types of pack devices contain a series of 1.5mm pegs; constructing a three-dimensional canvas to which minifig enthusiasts can attach a number of other RiGGED accessories. The mix of which spawns hundreds of color/type combinations making each minifig more unique than the previous.

“MMA – Modular Minifig Accessories are clearly the next evolution of 1.5” scale figure elements.” says Kyle Peterson (a.k.a. Armothe), owner of BrickForge Minifig Accessories. “Instead of a single piece of armor with various details molded into the design, the RiGGED system offers enthusiasts the opportunity to build their own custom body armor; where details consist of actual elements that can be pieced together to form a complete assembly.” 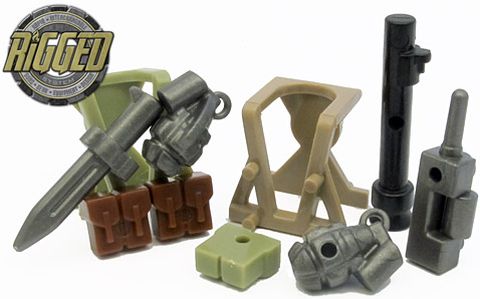 BrickForge has introduced the RiGGED system with its recent assortment of World War II accessories. Wave 1 consists of 17 elements in 6 colors. The Field Suspenders and Haversack are composed of pegs while most hand-held pieces are molded with a corresponding cavity. In addition, most firearms have removable attachments such as scopes, magazines & bipods – useful for creating multicolored accessories. Wave 1 elements like the Haversack can also attach to existing BrickForge elements like the Shock Trooper Armor & Tactical Vest. 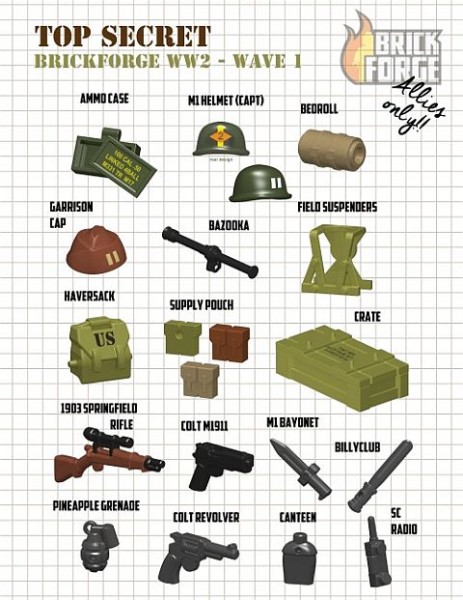 And the recently released Wave 2 introduces 20 new accessories modeled after items used by the AXIS powers during World War II, such as Fallschrimjager, Afrika Corps & Nachtjager.

“Wave 1 was about the heroes, Wave 2 introduces the villains.” says Armothe. “Well, I suppose one could argue they were heroes for their country – either way minifig fans have a few more RiGGED accessories to mess around with”.

The new wave includes a printed M35 German Helmet, two-tone Stick Grenade, Field Cap, Satchel, Modular Vampir rifle, and more. Because elements are engineered with the RiGGED system they inherently couple with items from Wave 1, expanding customizing possibilities. There are also plans for a Wave 3 of accessories (and probably more) and new colors. 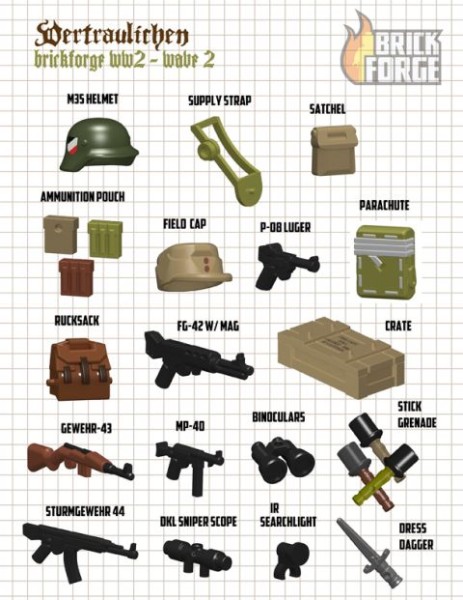 I’m really excited about this new system and the possibilities. I’m not so much into the World War I and II era, so I haven’t gotten any of the accessories yet, but I’m planning to get at least some to try out. It is interesting to know that they are quite similar in concept to the Mega Bloks modular minifigure accessories, especially in the Mega Bloks Call of Duty sets. I always liked the options the modular system offered, and was hoping that something similar will be used by LEGO at some point. So I’m happy to see BrickForge’s pioneering work in this regard, and I hope that they will also expand the system into other themes.

If you are interested in the new selection you can check out BrickForge’s Online Shop. Here I’m directly linking to the new WWII items, but you can also check out their full selection from the sidebar. BrickForge representatives also frequently attend LEGO shows and conventions, so if you happen to visit one, check out the vendors. It is really nice to see all the custom LEGO items in person. Please note that I have no affiliation with BrickForge. I just really appreciate their talent, work-ethics, and products.

So what do you think? How do you like BrickForge’s WWII selection? Are you planning to get any for your own minifigs? Feel free to share and discuss in the comment section below!