Which LEGO Quinjet version is better?

If you are a LEGO Marvel Super Heroes fan you likely know already that there are two versions of the Quinjet. One was released in the #6869 LEGO Marvel Super Heroes: The Avengers Quinjet Aerial Battle set in 2012, and the other in the #76032 LEGO Marvel Super Heroes: The Avengers Age of Ultron Quinjet City Chase in 2015. I really liked the 2012 Quinjet, but then I also like the 2015 version, even though they are quite different in several ways. I have been trying to make up my mind which one is better, but couldn’t, so I was very happy to find the following helpful video from the BrickShow, where Stephen compares the two Quinjets side-by-side. I’m probably not the only one who contemplated the question of which of the two Quinjets is better, so I thought to share this comparison with you. 🙂

As mentioned above, the #6869 LEGO Marvel Super Heroes: The Avengers Quinjet Aerial Battle was released in 2012. Here is the official description: Defeat Loki and his forces with the super fast Quinjet! Loki is up to no good and is planning to destroy the earth! As he flies into battle on board his chariot, help the Avenger’s defeat their nemesis using the supersonic Quinjet! Fire the missiles, release the mini-jet and imprison Loki in the prison pod! With the high-tech Quinjet, the Avengers can’t fail! Includes Thor, Iron Man, Black Widow, Loki and foot soldier minifigures. 735 pieces. Original Price: $69.99. While this set is no longer available directly from LEGO, you can still find it on the secondary market for around $60-$90. See listings here: Quinjet on eBay

and Quinjet on Amazon. 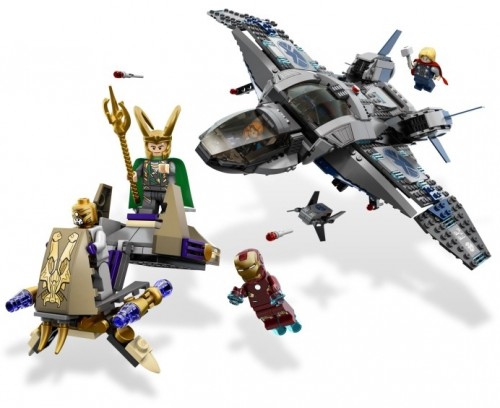 The #76032 LEGO Marvel Super Heroes: The Avengers Age of Ultron Quinjet City Chase was just released this year, along with other LEGO Age of Ultron sets (see: 2015 LEGO Marvel Super Heroes Sets Reviews). Here is the official description: Launch a Quinjet pursuit of Ultron to set the Vision free! Launch a high-speed pursuit of Ultimate Ultron with the Avengers in the iconic Quinjet. Place Black Widow at the controls in the cockpit and soar into the sky. Fire the stud shooters and release Captain America on his super-cool bike to take the pursuit to the streets. Iron Man MK43 is flying alongside the Quinjet using his thrusters, ready to take on Ultimate Ultron. When the time is right, make the perfect jump onto the truck to explode the sides and reveal the precious cargo. Includes 5 minifigures with assorted accessories: Vision, Captain America, Black Widow, Iron Man and Ultimate Ultron. 722 pieces. Price: $79.99. This set is currently available at the Online LEGO Shop.

The most obvious difference you will notice about the two Quinjets is the different color-scheme. The 2012 version is dark-gray and dark-blue with black tinted windshields, while the 2015 version is white and dark-blue, with transparent blue windshields. I think the dark-gray makes the first version look heavier and more menacing, while the new version looks lighter and faster. The 2012 version of the Quinjet is definitely larger, especially because of the much larger engines at the back. The shaping on the top and the engines is in fact the feature I like most about the 2012 Quinjet. The 2015 version has a very flat and streamlined look on top with some beautiful sculpting. Talking about sculpting, at least in my opinion, the 2015 Quinjet looks much better at the bottom, and the release function for the motorcycle (or whatever else you want to place into that bay) is a great feature. In the video-review below Stephen will show you all the other differences not just on the Quinjets themselves, but also the minifigs and other included accessories.

As you can see, both Quinjets have great designs and well thought out and executed features. Personally I like the color-scheme and the top section of the 2012 Quinjet and the back section and bottom area of the 2015 version. If I get really adventurous one day I may try to combine the two to make my own version of the ultimate Quinjet. 🙄

What about you? Which one of the LEGO Marvel Super Heroes Quinjets do you like better, and why? Do you have either or both sets? Would love to hear your opinion and analysis on them, so feel free to share your thoughts and discuss in the comment section below! 😉