While the Star Wars Force Friday event may be over, Star Wars is still very much prominent through the rest of the month. Of course, the biggest (literally!) news this month is that LEGO VIP members will have early access to the #75192 LEGO Star Wars Ultimate Collector’s Series Millennium Falcon starting on September 14th (regular release will be October 1st). However a Star Wars set the size of a dinner table and the price of a mortgage payment may not be everyone’s cup of tea. So today, we will discuss the newly released LEGO Star Wars: The Last Jedi sets. 🙂 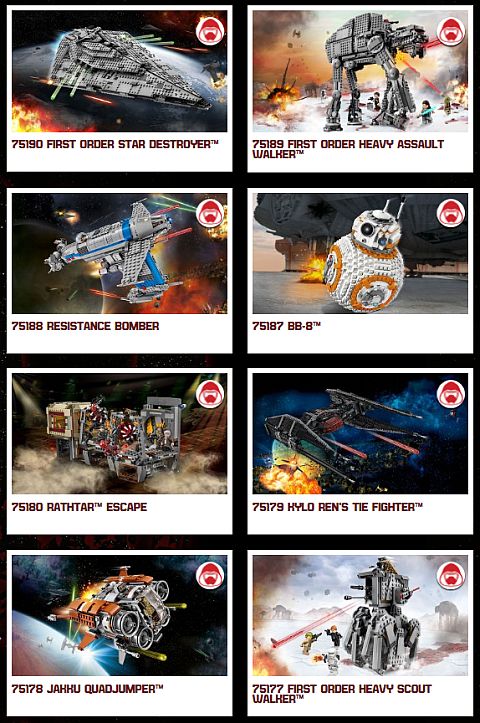 It seems that BB-8 is also the most popular amongst the new LEGO Star Wars sets, as it is already showing as temporarily out of stock. A number of the other new sets are on backorder as well (which means you can still order them, but there may be some delay in delivery). This is likely the result of the Star Wars Force Friday sale, and stock should be replenished soon. Below are the product animations for all the new sets, so you can see all the play-features and minifigures, and you can find the sets under the LEGO Star Wars section of the Online LEGO Shop.

From the seven sets, I would agree that the #75187 LEGO Star Wars BB-8 is the most unique, and could be an adorable companion to the #10225 LEGO Star Wars R2-D2 released in 2012. Some of the other new sets like the #75189 LEGO Star Wars First Order Heavy Assault Walker, and the #75190 LEGO Star Wars First Order Star Destroyer are perfect for those who weren’t able to get previous versions. As there are so many new sets, we won’t be able to discuss them individually, however I have included video-reviews below by JANGBRiCKS, so you can check them out in more detail. The playlist includes an overall review of the new LEGO Star Wars: The Last Jedi collection  (first video), along with individual reviews for each of the sets. You can use the drop-down list in the upper-left corner to select the review you would like to watch.

➡ LEGO STAR WARS ADVENT CALENDAR: I forgot to mention this at the beginning of the month when we talked about all the new LEGO sets (see: September 2017 – New LEGO Sets & Promotions), but the 2017 LEGO Advent Calendars are also now available, including the #75184 LEGO Star Wars Advent Calendar (pictured below), the #60155 LEGO City Advent Calendar, and the #41326 LEGO Friends Advent Calendar. This year’s LEGO Star Wars Advent Calendar features seven minifigures plus BB-8 with a Santa hat. The micro-size vehicles include The Ghost, The Phantom, Stormtrooper transport, Rey’s speeder, Millennium Falcon, Snowspeeder, Kylo Ren’s Command Shuttle, Y-wing, TIE Striker, Hovertank, AT-ST, blaster cannon, snow blower and a sled with boosters. You can find it under the LEGO Star Wars section of the Online LEGO Shop. 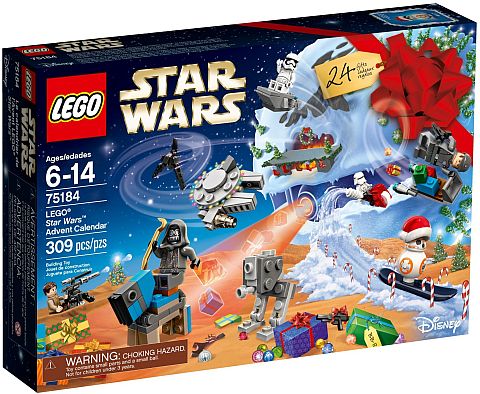 As you can see, there is quite a large selection of new LEGO Star Wars sets that fits every taste and budget. Whether you are collecting the buildable figures, minifigures from the new films, or just looking for interesting parts, there is something for everyone. You can find all the new sets under the LEGO Star Wars section of the Online LEGO Shop.

What do you think? How do you like the new LEGO Star Wars: The Last Jedi sets? Do you have any favorites? Do you have some of them already? Feel free to share your thoughts and own review in the comment section below! 😉