When the Bricklink Designer Program launched, I ended up getting four of the five models in the first round of crowdfunding. The Great Fishing Boat was the last one I built since it was a birthday gift from my wife. Sadly, I kind of regret asking for it. 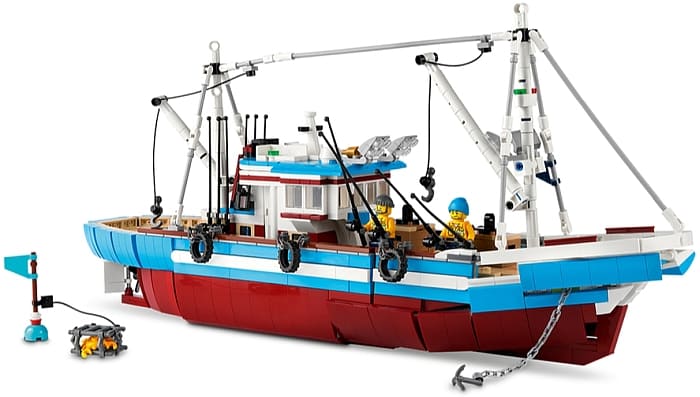 I personally love the idea of a detailed LEGO fishing boat. Plus, I know how fan designers like to put everything possible in a design, so I was expecting a highly detailed model. I was also expecting that LEGO’s own designers would help a little to make sure the model is stable and offers a fun building experience.

When I build something, I’m not too concerned about having the most secure connections. As long as it looks good on display, it’s good enough for me. And this is also what I would expect from most fan-designed models. However, if LEGO is going to put their name on a model, I expect to see the strong fundamentals they incorporate in nearly every set they sell. Unfortunately, this model has issues. 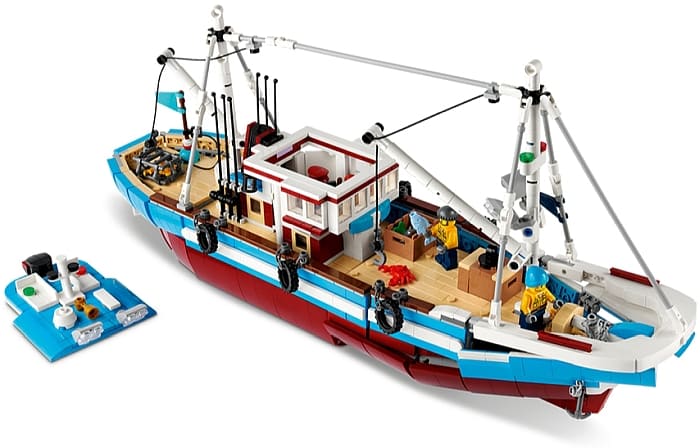 I want to be clear; I’m not at all upset with the fan designer of this project. After all, they created a model that looked good in pictures, and they got it this far with strong fan support and votes. Ultimately, I believe LEGO failed the fan designers and didn’t support them in a meaningful way. Instead, fan designers were expected to magically know what goes into a professionally designed LEGO set.

So let’s take this as an opportunity to learn from and see where the model had problems. I would like to emphasize again that it’s not my goal to bash the fan designer in doing so. As I mentioned before, these are mistakes I’d make as a fan builder myself. But by pointing them out, I hope to have others avoid these pitfalls.

I think my biggest issue with the set is that it appears that it was only built digitally and never with actual LEGO pieces. Of course, I don’t know for sure if this was the case, but it definitely felt like that through a number of instances as I was building the model.

Building digitally is an awesome tool for LEGO fans. It gives us an infinite number of parts to realize our dreams. However, there are things that the digital space doesn’t do well and translates poorly into real life. So, if you ever want to share a design with anyone who wants to build it, it is a good idea to build it with real bricks to avoid the following pitfalls. 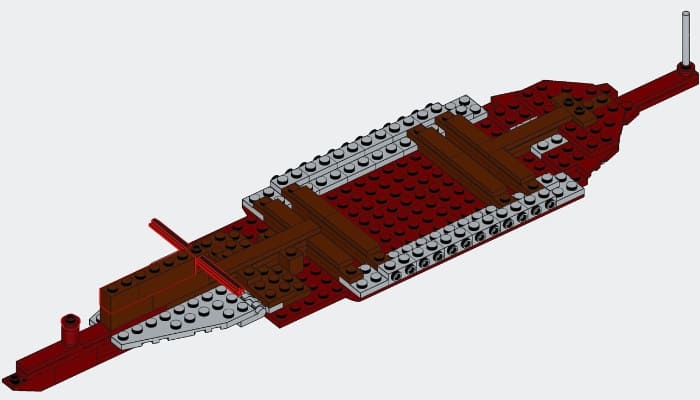 Starting things off, there is a loose axle near the front of the ship added early on. In the digital space, it stays where you put it. However, it’s pretty late in building the model in real life when this axle becomes semi-secured. I kept knocking or dropping the axle while building other sections of the boat. I kept putting it back since I was never certain when it would become important, and just about the time I forgot it was there, it dropped out again. In short, loose elements aren’t stable builds. 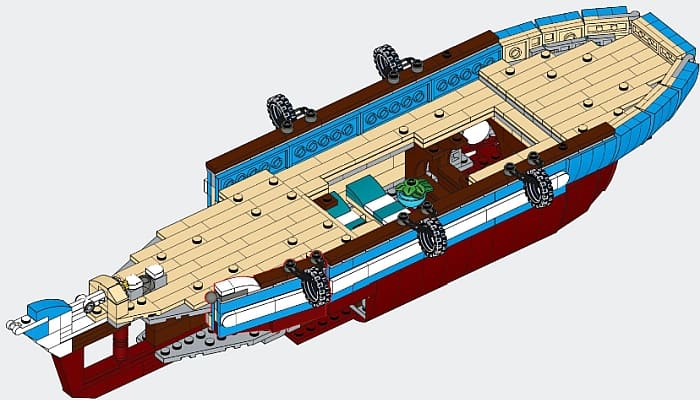 Next, there are a couple of sections that are only connected by a single clip for a good portion of the build. Each of these sections is at the front of the ship and consists of a number of parts. Although these sections aren’t terribly heavy, they do make the single clip vulnerable. Out of all the LEGO pieces I own, the one type that breaks the most easily is the clips. If the clip was used as a decorative element, it wouldn’t be too much of an issue, but since they are part of the hull of the ship they are under stress. I found myself constantly removing these sections in order to avoid breaking the clips. 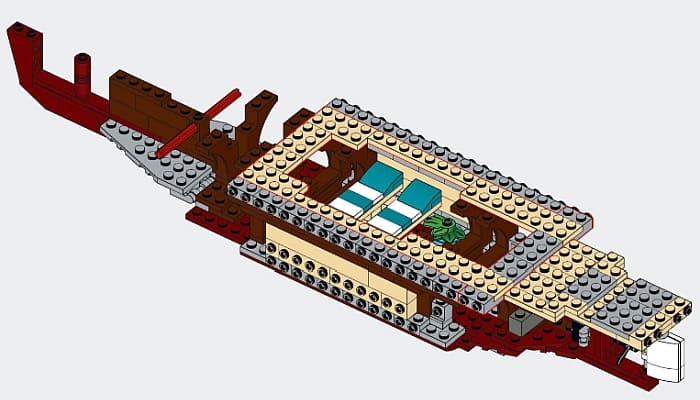 Then, there are a number of instances of parts being attached by single studs. Fortunately, many of these are decorative and are fine for detailed models. However, early on there are two plates, a 2×2, and a 2×3 – that help to form the decking foundation of the boat. Each of these is only connected by a single stud, and the plate that is attached over them is designed to press down where they had no support. After wrestling with this for a few minutes, I finally made the connection solid. What baffled me the most is the fact this could have been solved with a few plates right next to the hole. Take out a 1×3 brick and instead use three plates with a middle plate reaching under and supporting the weak point. Digital design doesn’t take into consideration imperfect pressure when attaching parts, so all these weak single stud connections ended up causing constant irritation. 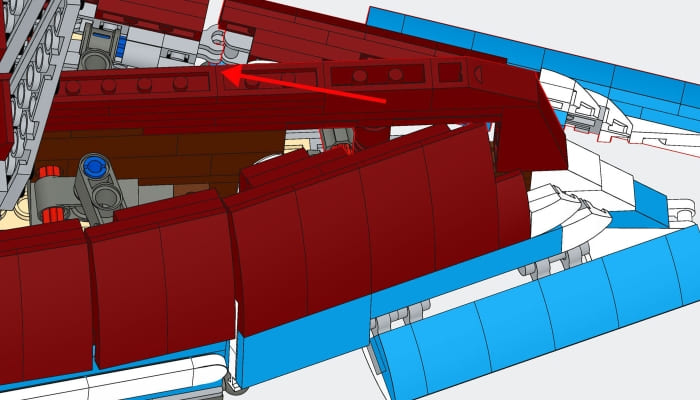 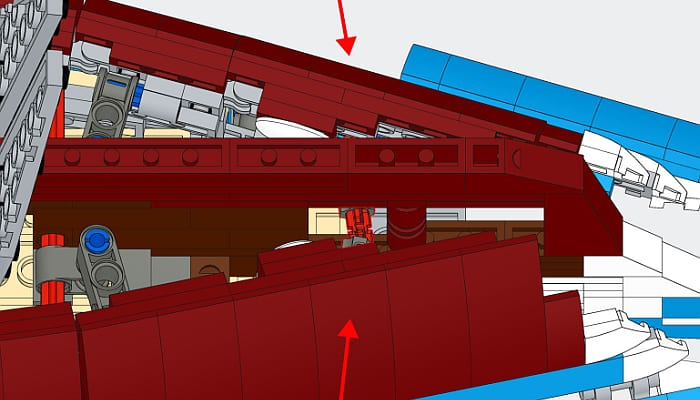 Finally, we get to the sections that almost made me chuck the model across the room. In order to achieve the curvature of the boat’s hull, the designer used a technique I refer to as wrapping. This involves sections with clips and bars (or any element that can hinge) in a series in order to wrap around a shape. This technique is spectacular for decorating and creating interesting curves. However, in this case, the wrapping is at the bottom of the boat, where it is handled the most and thus experiences a lot of stress. In fact, this is probably one of the worst places to use the wrapping technique.

But the port and starboard sides of the boat’s bow have a lot of structural issues. First, the sections are mostly covered up, so you’ll be trying to connect them blindly. Second, the connections that are used are rather minor given the number of parts that they need to hold. In order to remedy this, LEGO Technic arms are built to finally latch on to the axle that has been dropping out throughout the build. This works fine for the first side, but once you no longer have access to the other side when placing the opposite side of the ship, it becomes very difficult.

But the section that almost ended this build for me was the front-most side. On one end, it uses two clips to continue the wrap. On the other end, you have to thread an angled axle into a connector without seeing and without breaking the other side of the boat. In my attempts, I managed to disconnect the support that was supposed to anchor the side down. There are only four studs so it didn’t have a great grip.

By some miracle, I managed to make the connections work. Rejoicing in my triumph, I decided to adjust one of the sides of the hull to minimize a gap in the wrap. Well, turns out it wasn’t really backed against anything too solid and that section of the hull just fell off. Which brings me to my initial point; building digitally only can’t really show you the weak points of your model.

Moving away from the building experience, I figured that there are at least some play-features. Maybe not rough handling type of play given the fragile nature of the hull, but perhaps I could pose the minifigs in interesting ways to tell a story. Well… sort of. 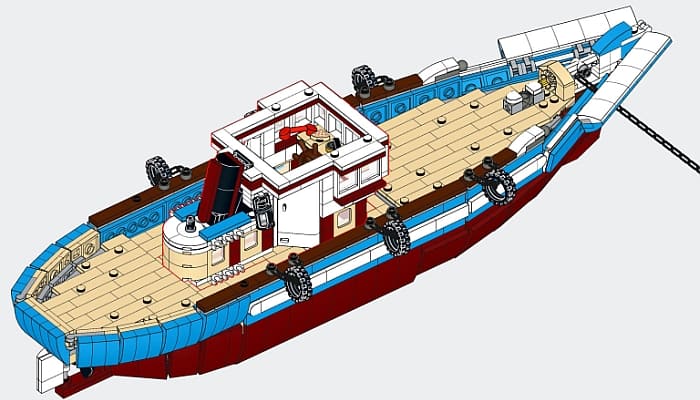 The deck of the ship is the best section for minifigs and cargo as it has a number of free studs to secure them to. With a crane in front and one in back there are a variety of things the crew could do. But the inside is a different story. 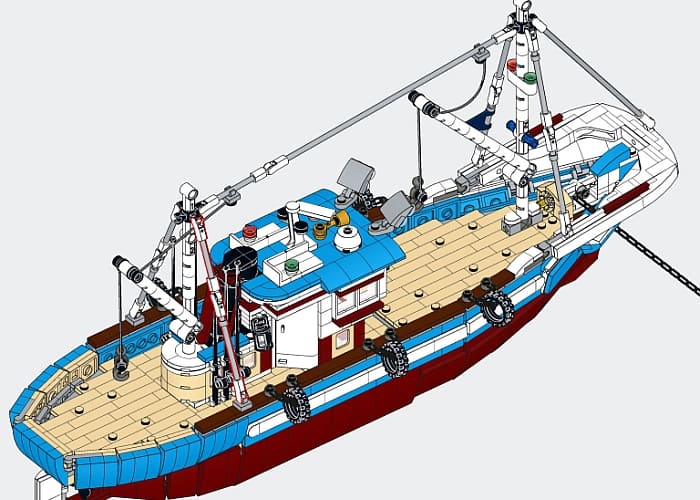 You can gingerly take off the roof of the pilot house to access the wheel. But you do have to be careful as there are sections that could break off. Then, there is the inner hull of the boat with a couple of bunks and a few items scattered around the area, but I’m disinclined to access it. The reason for this is that it is just too much risk and too much work. 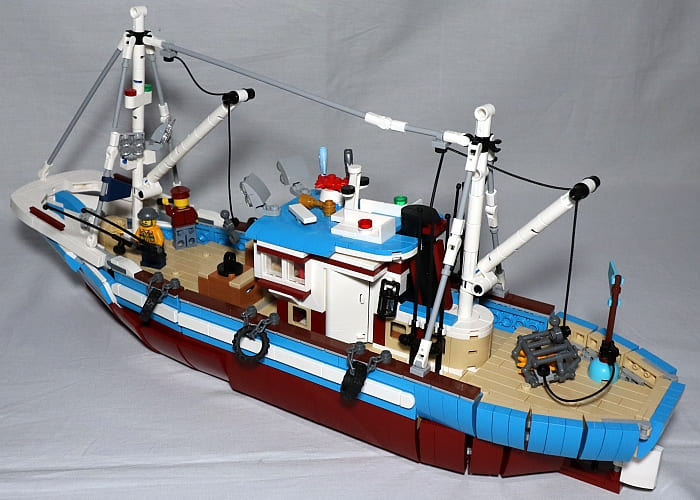 First, I must disconnect the bar from the front mast. Then I need to disconnect the bars on the back mast from the sides of the boat. This also means I should take off the crab cage from the hook since I don’t want to drop it. Now I need to pull the whole center section straight up. This is connected to about six studs set in a well in the boat (this is actually a fairly stable connection). 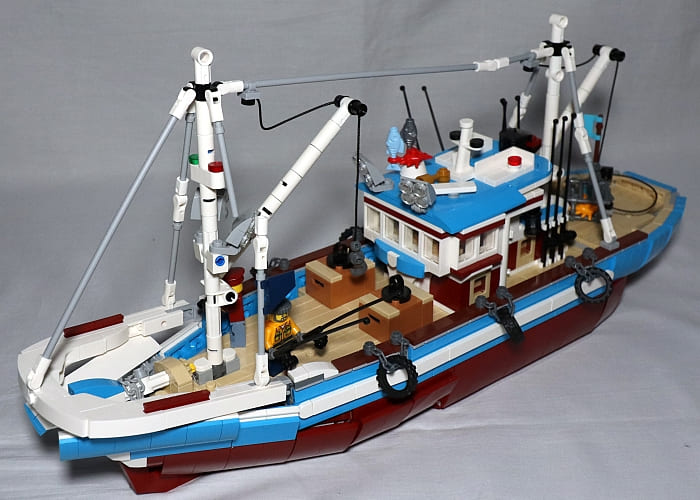 However, I know what went into building the pilot house, and I know it isn’t the most reliable of builds due to the amount of decorating that went into its design. Chances are that while I’m doing all of this, I might rip apart the center of the boat and leave the flooring still in place. This means the section I want to get at would still be covered. After the headache I went through building the boat the first time, I’m going to resign to never accessing the inner section. 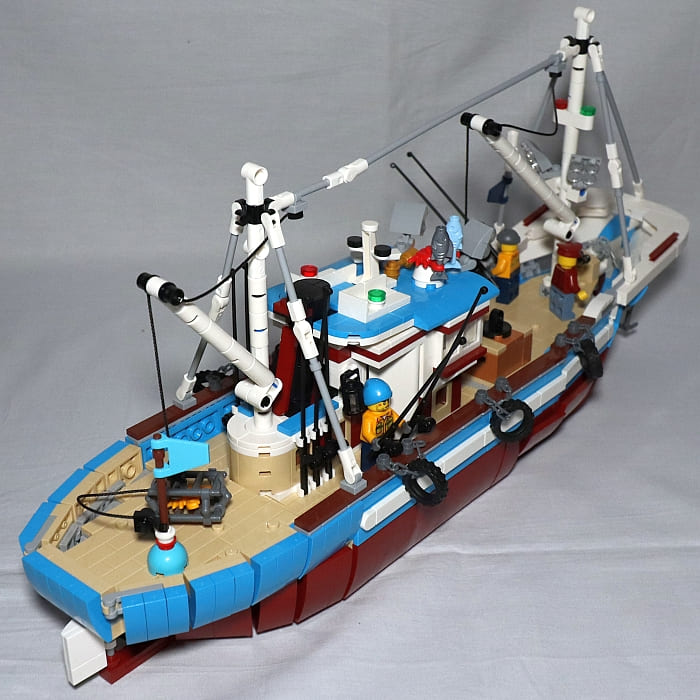 The idea of an expert-level LEGO fishing boat is a good one. This fan-created design manages to put in some real knowledge about a fishing boat and things you’d find on it. And at a glance, it looks decent enough. Unfortunately, the price you pay for this set is way beyond the experience you get out of it. The building process is stressful and poorly executed at times. This project felt as though LEGO didn’t bother helping the designer realize the best possible boat that could have been built. 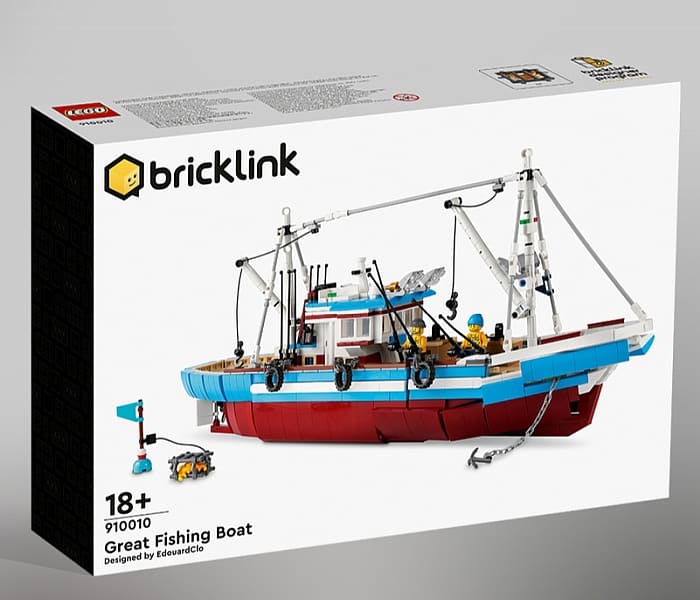 Ultimately, this does not feel like a finished product. I wouldn’t expect just anyone to be able to assemble the model as instructed. At times, I had to deconstruct the model in order to use a different building approach in order to assemble the boat how it was supposed to go together. I would say that this set is for collectors. Those who are more interested in keeping the set mint-in-box rather than building it. For everyone else, you’re better off finding an older fishing boat set that LEGO sold at retail and modifying it to your liking.

If you’re curious to check out the building experience yourself, you can use the LEGO Instructions app to find the set, or download (and even print out) the PDF version. You can access both via this BrickLink Designed Program page.

What do you think? Have you gotten any of the BrickLink Designer Program sets? Which one is your favorite? And what do you think of the Great Fishing Boat? Feel free to share your thoughts and discuss in the comment section below!