A week or so ago, I reviewed the #21325 LEGO Ideas Medieval Blacksmith, and toward the end, I pointed out a few things that I didn’t like so much about an otherwise fantastic set. Of course, the beauty of LEGO is that if you don’t like it, you can rebuild it! So, I decided to go for it and see if I couldn’t make it better. The following was the result. 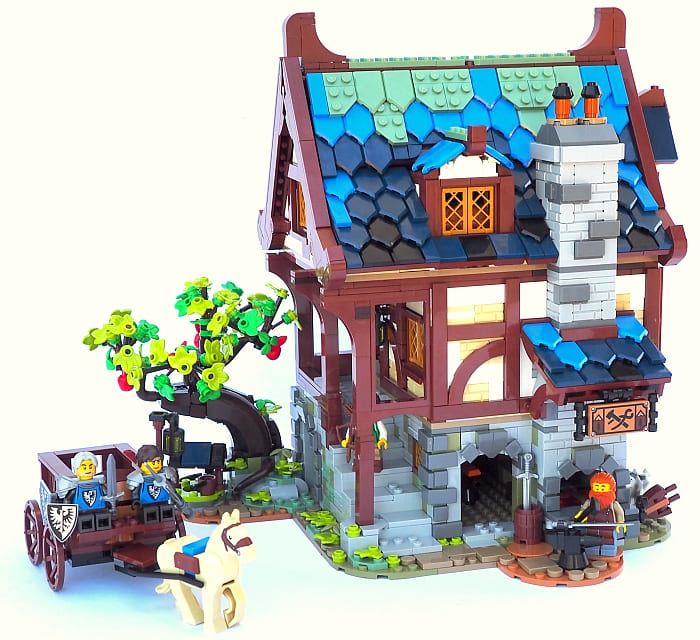 Above is a picture of the original, so you can play a game of spot the differences. 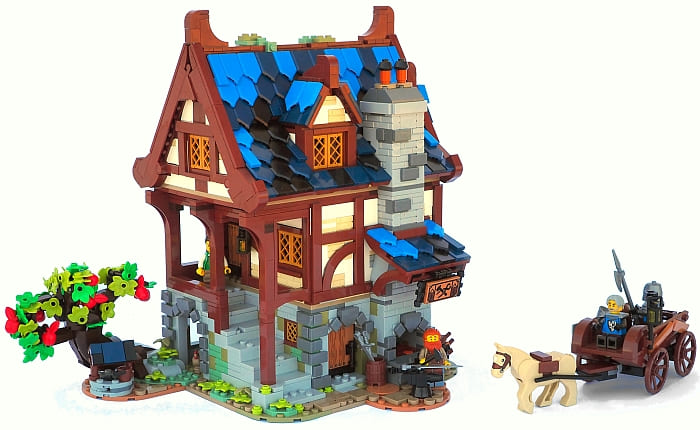 The first and most obvious change is the roof. I’m not the only one to have made negative comments about the sand-green moss; there’s just too much of it and it’s not the prettiest color when paired with blue. So I got a handful of dark-blue and black shield tiles (didn’t have any bright-blue in my collection) and took the moss off. However, I realized after taking all the green off, that it actually had done a nice job of tying the roof in visually with the landscaping. So I reintroduced just a tiny bit of moss on top. (Yes, we have some unattached pieces there…) 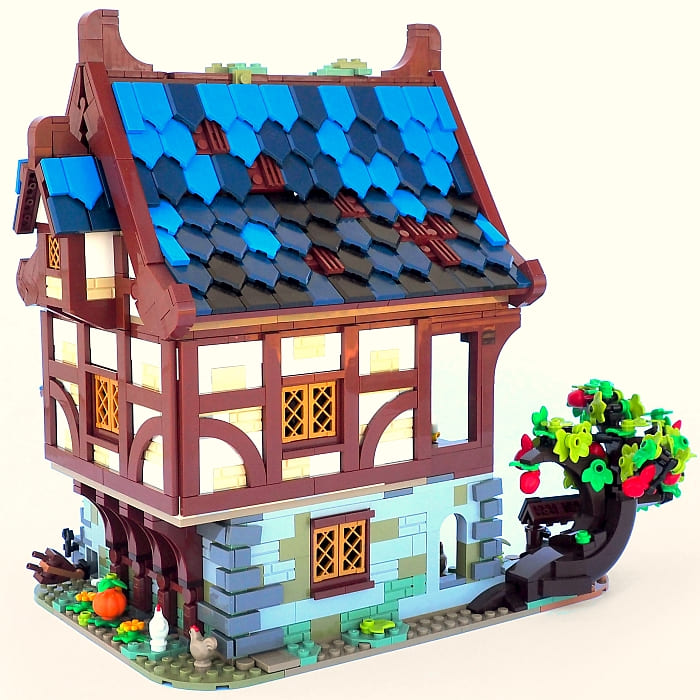 For the back, I added a few brown grill tiles to create more gaps in the roof. It helps make it more interesting for the eyes and saves on shield tiles too.

After this, I decided to touch up the smaller roofs. I wanted to bring them more into the style of the main roof, without the strict limitations a LEGO designer would have about being able to withstand play. 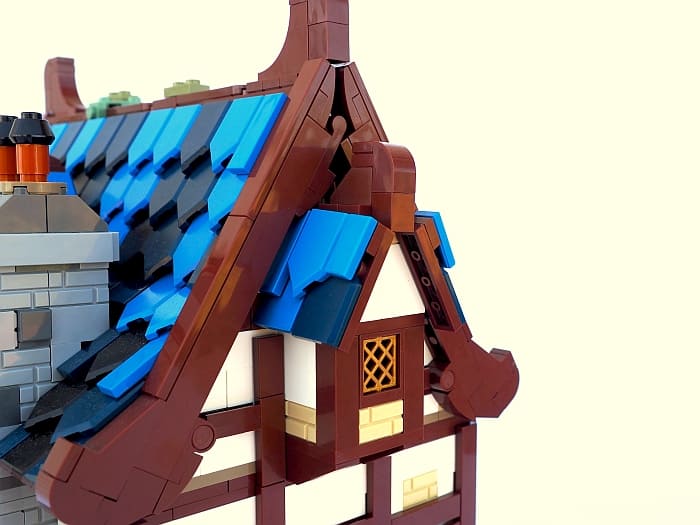 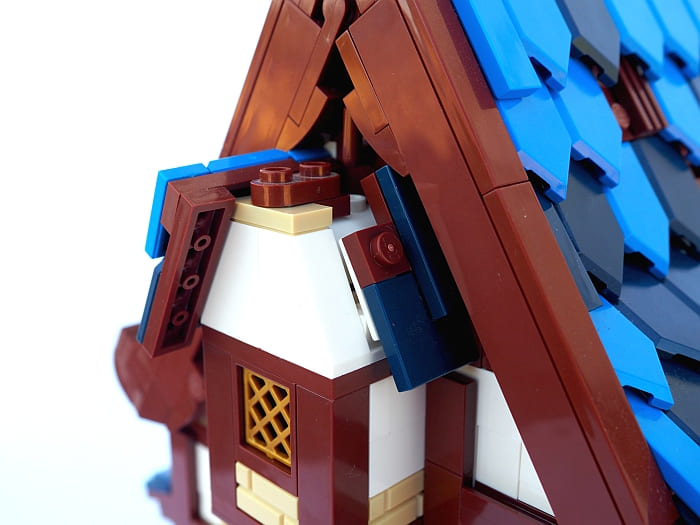 As you can see from the above picture of the inside of the construction, my solution is not attached by much, but it doesn’t fall off under normal circumstances.

I also touched up the other small roof. I was originally thinking about doing something totally different when the obvious problem with the original roof hit me: it looks terribly incomplete, because the tips of the shields are hanging over the edge. The main roof ends in a straight line, so I fixed the small roof to end in a straight line too. 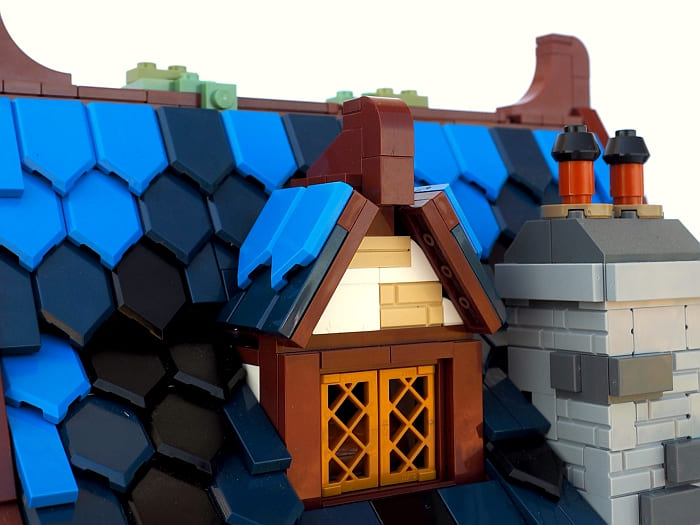 Of course, I had to find a few more shield tiles in order to pull this off. It’s also not quite as sturdy as the original solution. But this isn’t a spaceship, so it doesn’t need to resist being swooshed, does it? 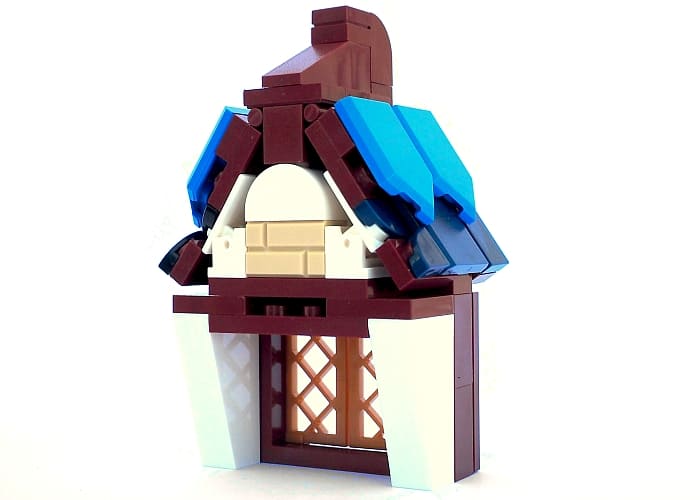 The next difference is the apple tree. I was far less than impressed by the original tree; it has some creepy angles and branches sticking out. For my tree, I took all the horns and stalks out, and tried to create something that looked a little more organic with arch bricks. 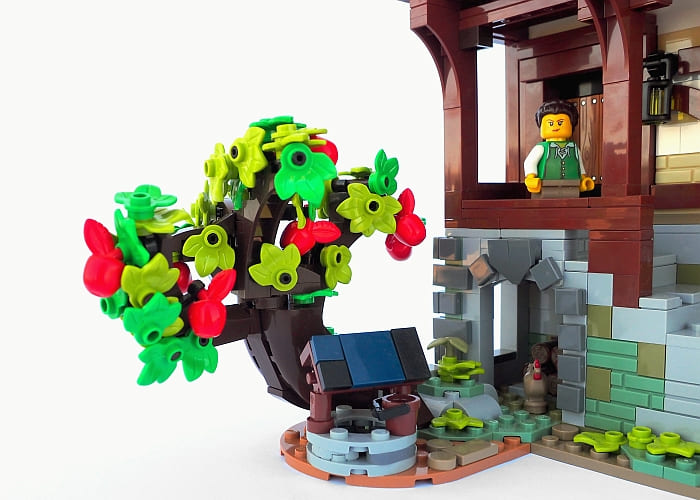 After all, apple trees are hard to build. I relied heavily on espresso plates (Bar 1L with 1 x 1 Round Plate with Hollow Stud) for attaching the leaves at organic angles. Also, note that I added four or five medium-green leaves, but mostly only used the ones that were in the set. 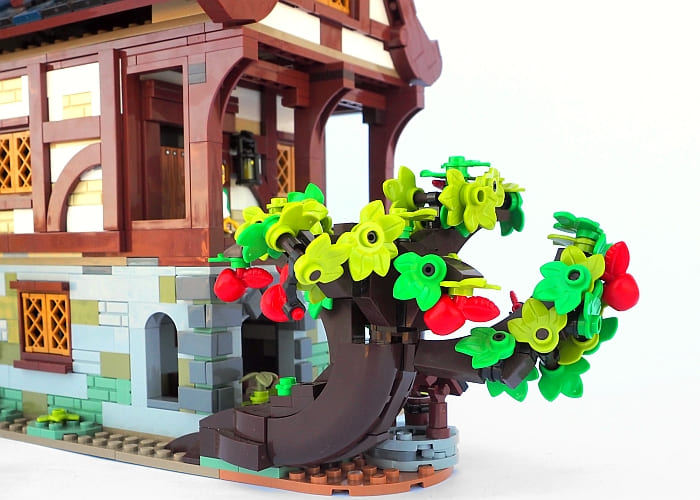 One thing I did like about the original apple tree was the use of those large dark-brown bow curves. They give some sturdiness to the lower trunk, although my version is in general much less sturdy than the original. 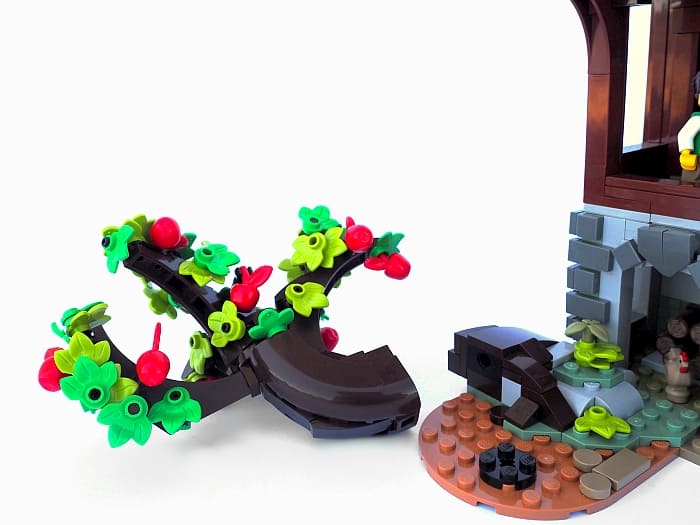 A relatively minor change was the well. I got rid of the lime-green round piece on top – who wants to drink out of a well with a rim that color?! 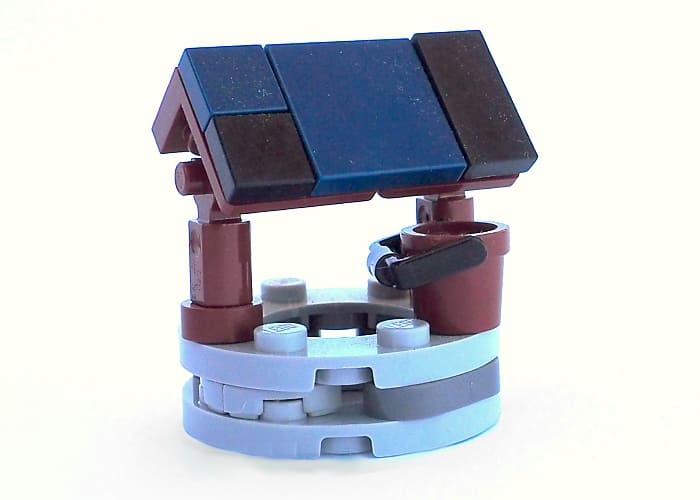 I switched the husky out for a few chickens, and made the very minor adjustment of taking out the olive 1×2 plates behind the decorative triangle on top of the arches (there are three of these on the bottom story in different places). 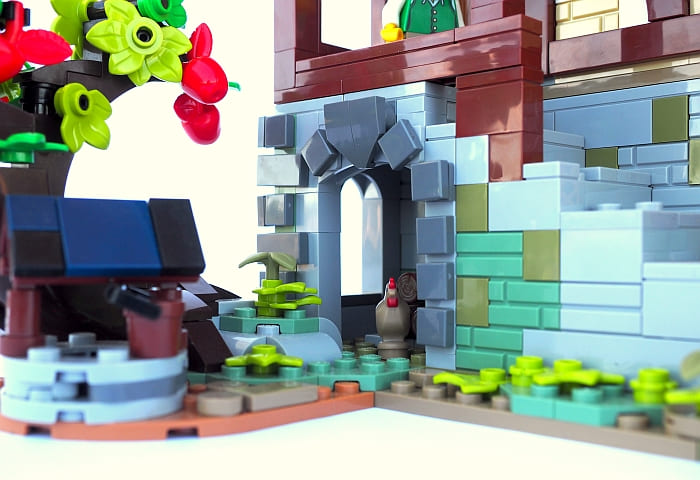 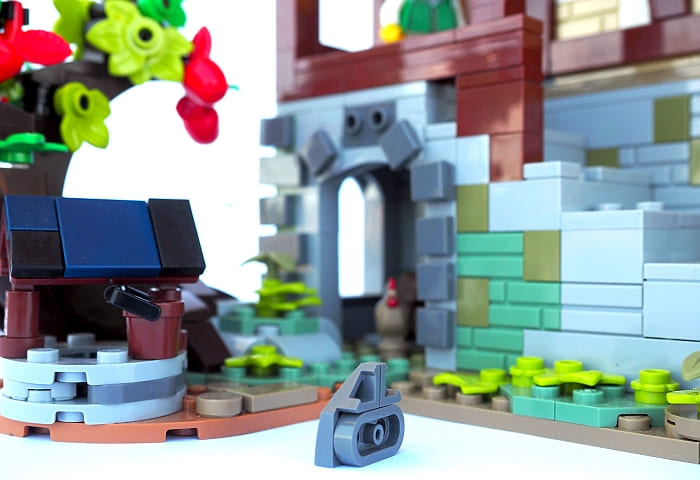 Last but not least, I gave the wagon a thorough overhaul. I even looked up some pictures of medieval wagons to get a feel for it! 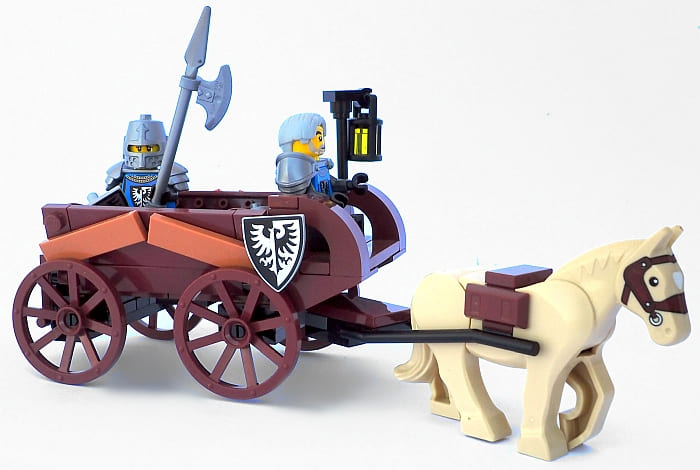 The original wagon seemed incredibly blocky to me; for this one, I got a subtle tilt on the sides and even managed to use one of the fence pieces on the first one as the back gate! 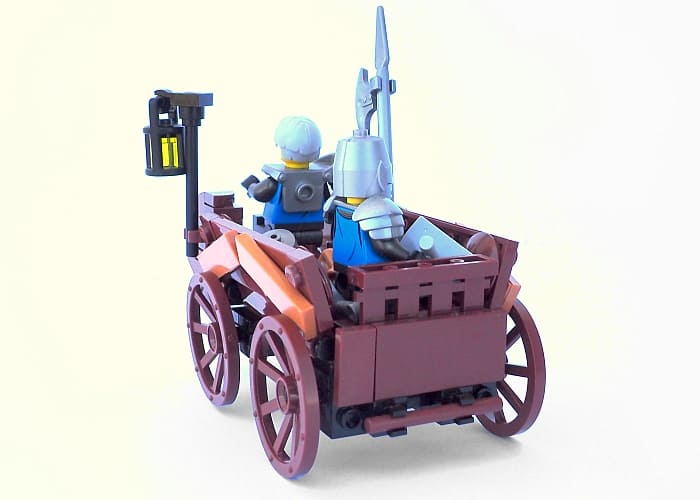 So these were my adjustments to the LEGO Ideas Medieval Blacksmith. This set has lots of potential and I’ve just scratched the surface. There’s a lot more you could do to it to make it fit your own medieval aesthetic. I especially recommend toning down the moss on the roof, and if you have a bit of patience, try working with the tree. 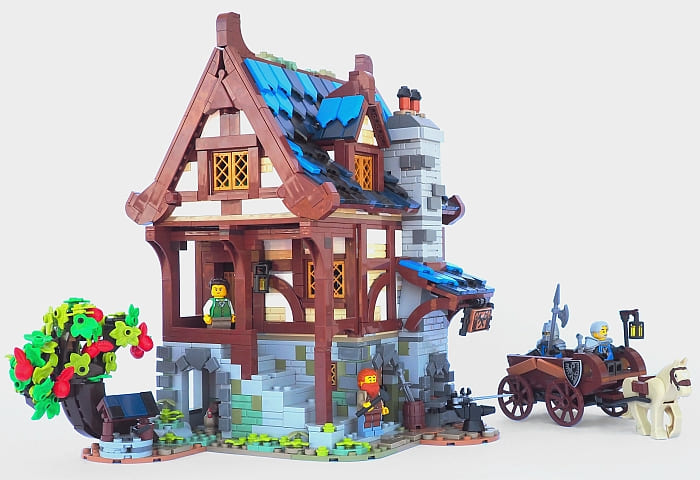 I hope it seeing the changes I made give you a better feel for what you’d like to do with this set. If you’re eager to get building, the Medieval Blacksmith is now available at the LEGO Ideas section of the Online LEGO Shop!

What do you think? Have you gotten the Medieval Blacksmith, or are you planning to? What adjustments would you like to make? Do you like the roof better with less moss? Feel free to share your thoughts and discuss in the comments section below!

Next post: Remembering BIONICLE & Watch the Films in HD