by Thita (admin) on October 5, 2021
in Community Articles

Nine years ago, I built a micro pizza shop, uploaded it to Flickr, and posted it on Eurobricks. Since then, I’ve regularly built and posted between fifty and a hundred LEGO creations a year, and not only that, but three of my siblings have followed my lead and started posting their own creations. In some MOCing circles, the Durand family has become notorious for its size (though occasionally that’s been exaggerated… there are not quite a thousand of us). So what’s it like to build in the same house, and frequently in the same room, with three other LEGO builders? 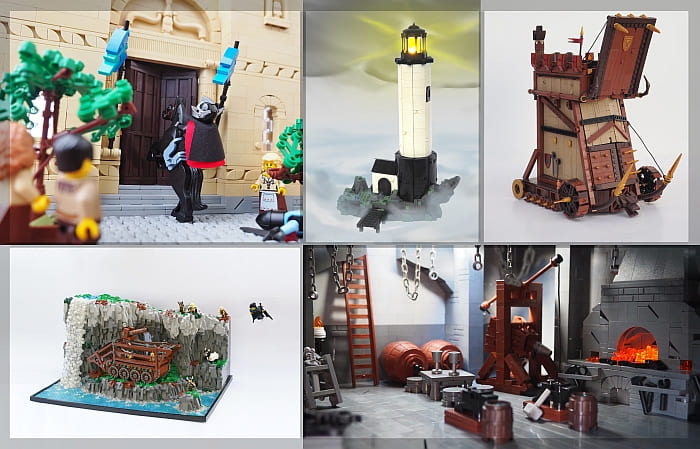 First of all, let me introduce you to us and our work. I (Geneva) am the oldest and was the first to start posting my creations online. Not long after, Isaiah joined me. Then Josiah started posting, and quickly outstripped us both in popularity! Last year, we were joined by Anna, the fourth in the family. I’ve collaborated twice with my fifth sister, Sarah, but she’s not into building on her own. And our three younger siblings are too little to have an online presence, but I wouldn’t be surprised if they do someday! The picture above is a collage of five creations, each by a different one of us.

Now that you’ve met the builders, it’s time to meet the bricks! Isaiah, Josiah, and I each have our own separate collections. (Anna mostly builds with Josiah’s bricks.) For about a year now, our collections have all been located in one large room. My collection is the largest and dare I say the best organized? 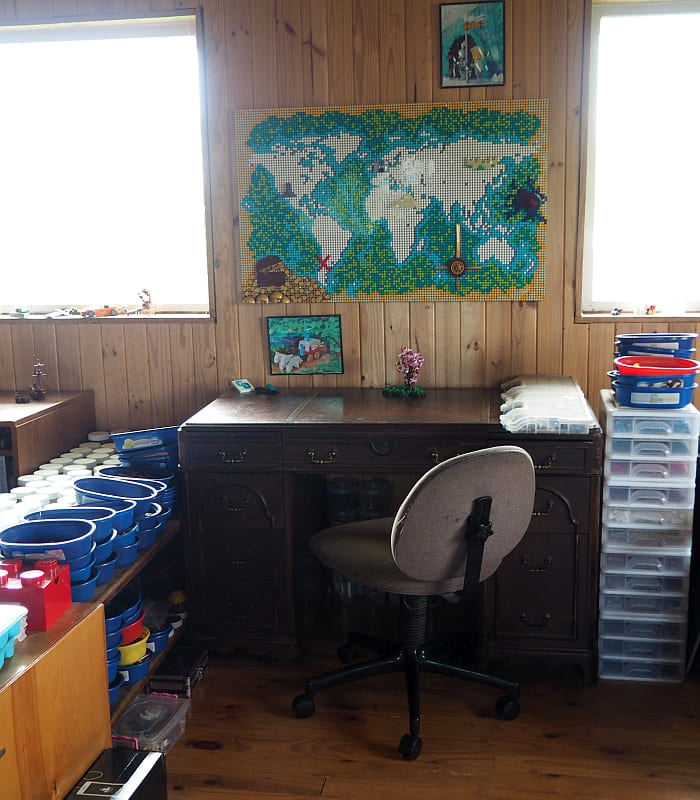 Isaiah sorts mostly in plastic bags and keeps those in a variety of buckets under his desk. 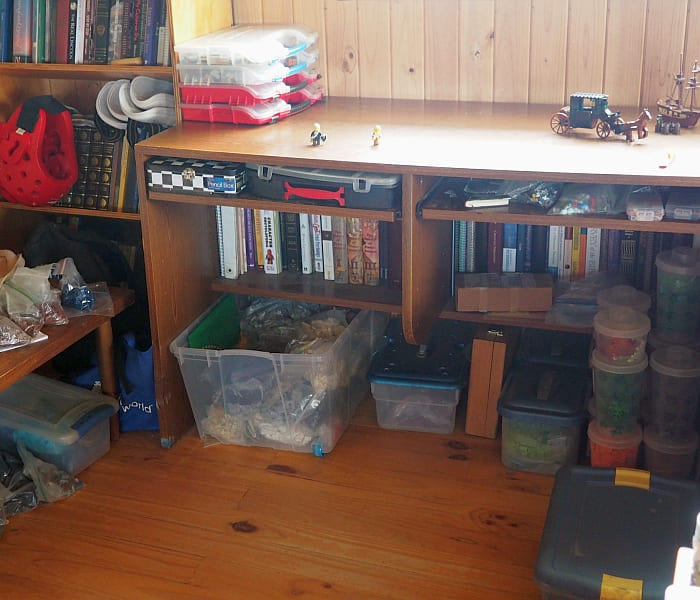 A few months ago I sorted Josiah’s collection. Anna was supposed to sort it in return for being allowed to use it, but she was taking too long. I got tired of the eyesore, and besides, Josiah’s original sorting system was a little sloppy—at least from an outsider’s perspective… he claims he knew just where everything was. Eventually, I gave in and sorted it myself, to make things easier for me when I want to borrow pieces. 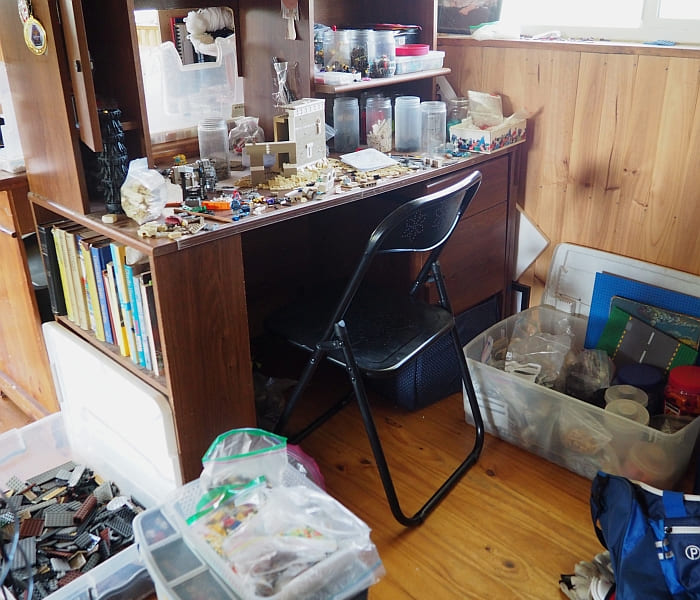 Speaking of borrowing pieces brings me to the obvious question: how do we share bricks? Some sibling builders sort all their LEGO as one collection. We didn’t choose to do that, but each of us frequently runs out of pieces and it’s incredibly handy to have a backup collection you can borrow from!

Our borrowing system has a couple unwritten rules. First, make sure you keep track of what you borrow on paper. Secondly, put it back soon. Third, if you don’t put it back as soon as possible, don’t complain if you get growled at. Fourth, if you win a contest with a MOC that used a significant quantity of borrowed pieces, it’s polite to give any “extra pieces” in the prize set to the other person. Like many rules, these get broken occasionally… especially the second rule.

Borrowing does get tedious when you have to count out hundreds of say 1×1 round light grey tiles. I usually group pieces into piles of five and line them up in double rows so I can easily see a hundred. I have tried weighing pieces, but small parts are especially light and I don’t have a scale that’s precise enough. No surprise I guess, even LEGO doesn’t use scales that are sufficiently accurate for the smallest pieces—thus the “extra pieces” that frequently show up in sets!

This is my “borrowing book”. I usually can find a way to describe a piece clearly enough, but sometimes I draw the shape of it too, for things like “1×2 plate with bar”—that just doesn’t explain where the bar is! 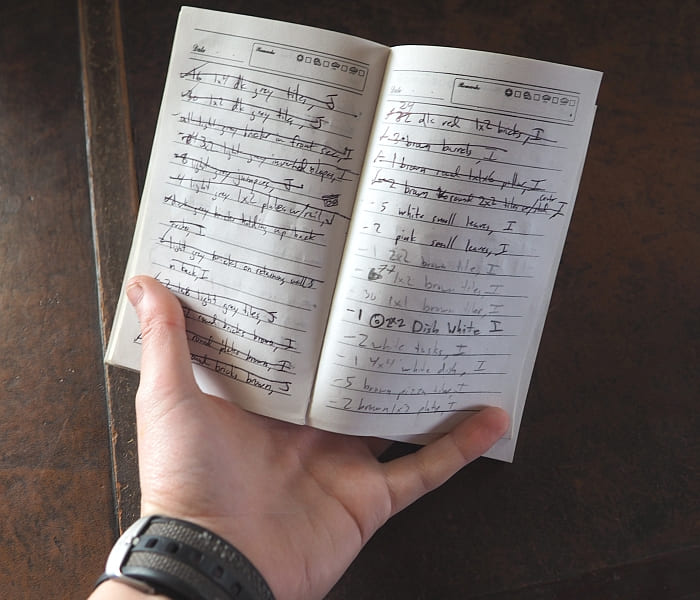 We all borrow a lot from each other, so we try not to get too annoyed when someone borrows just what we wanted to use. Likely enough, the shoe will be on the other foot in a couple weeks!

Building with three siblings also leads to a bit of friendly rivalry.  We’re super competitive, so we definitely try to outdo each other… especially if we enter the same contest!  But besides the rivalry, it’s also inspiring to watch each other’s builds grow. A couple months ago Josiah built a massive Tibetan-style monastery. It was pretty neat to see all the details gradually come together! 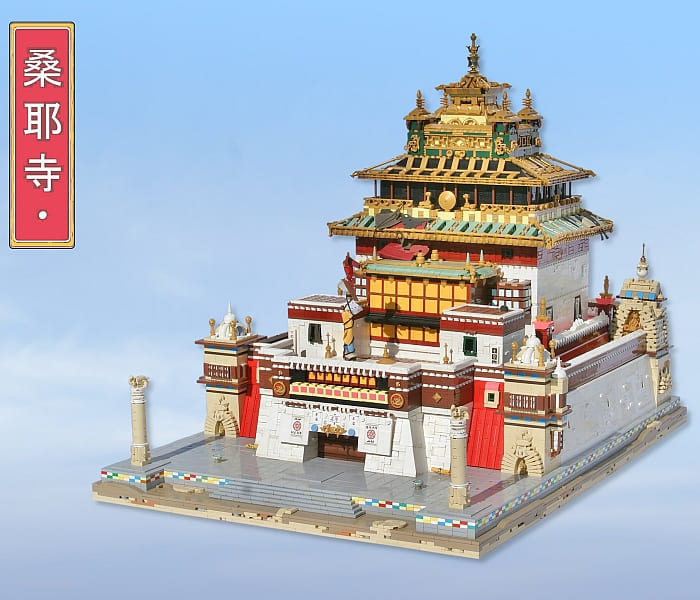 Inspired by that, I went really large on this fighting pit and used more minifigs in a single MOC than I ever have before. Seeing my siblings’ work definitely continues to motivate me to build better and bigger! 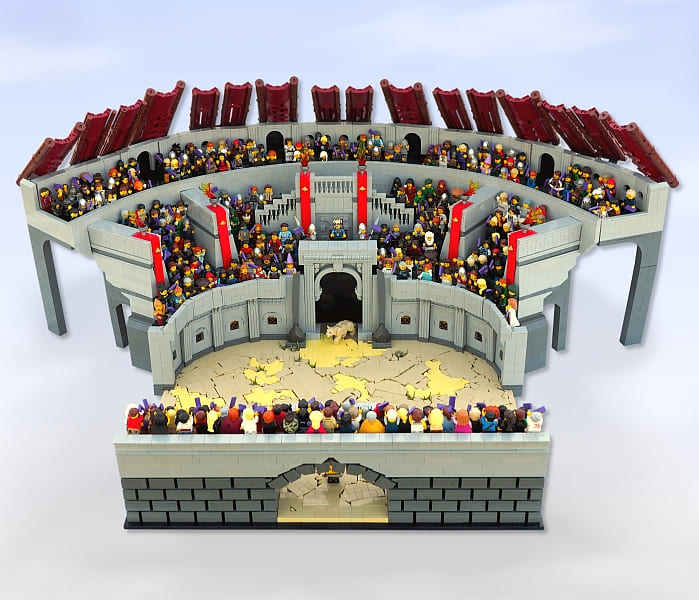 There’s another big benefit to sharing the LEGO building hobby with other family members—we have a built-in advice panel! We all frequently stop by to see what each other is building. Or we call out across the room, “Hey, what’s the best way to fill in a half-stud gap?” And even though sometimes we don’t like each other’s advice, it’s still helpful to get the creative juices going!

I remember working on this little forest vignette. I was going to put redcoats behind the trees and a militiaman in front. But Isaiah pointed out that the redcoats got lost in the foliage, and there wasn’t anything to draw the eye. Instead, he recommended putting the hiding minifigures behind the trees and something more exciting in front. After a bit of brainstorming, I took his advice and used Native Americans and a deer instead of redcoats. 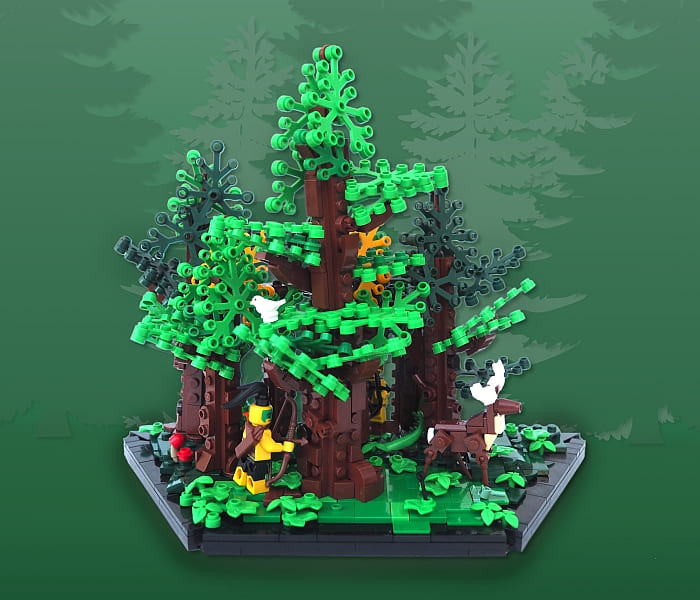 Another thing we can do as LEGO building siblings is collaborating easily. We’ve worked on several collaborative projects. Isaiah and I have frequently each built half of a MOC, like this cliffside village. 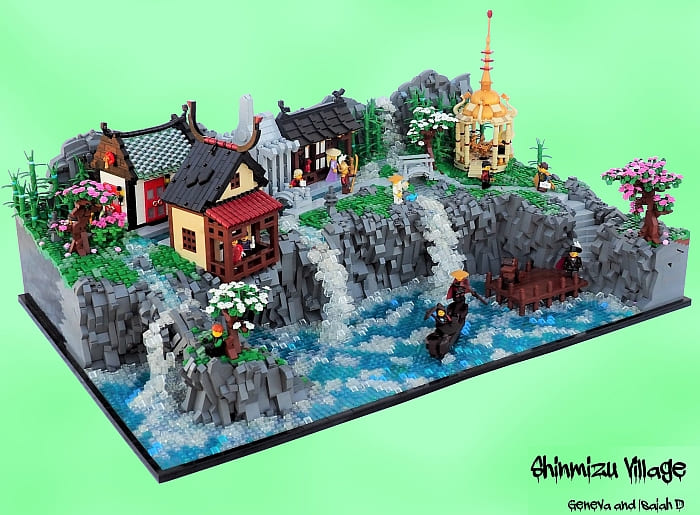 A few years ago we built a little city as a family. This filled a couple of fun afternoons! 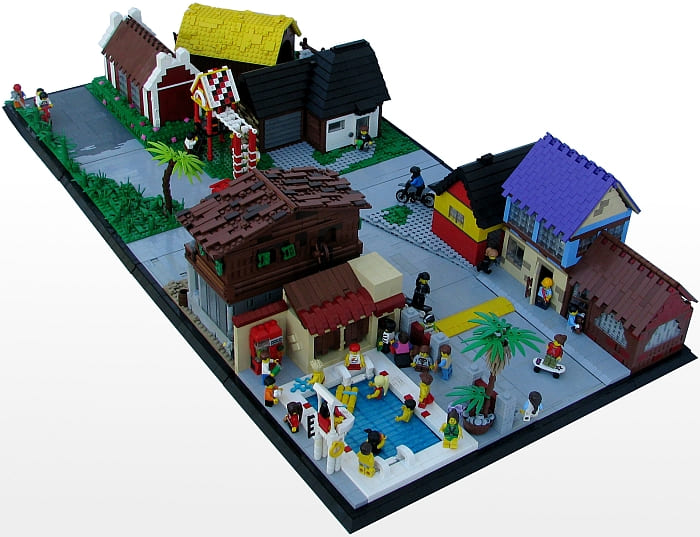 We’ve also collaborated in a more individual way, each building different MOCs that revolve around the same story. 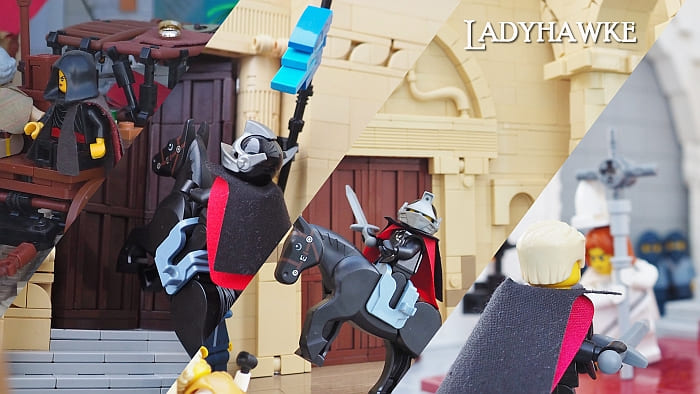 To sum up, as LEGO-building siblings we’ve all pushed each other and inspired each other to do better. We enjoy bouncing ideas off each other, borrowing pieces among ourselves, and oh yes, the fun of beating each other in competitions and then rubbing it in…  And for sure we enjoy the notoriety that comes from being a large group of people with the same last name all engaged in the same hobby!

What do you think? Is there any close friend or family member you get to build with? Do you enjoy building with another person? If you’ve never had that experience, why not ask someone to join you and build something together? Feel free to share your thoughts and discuss in the comment section below!