Yesterday, LEGO added seven new LEGO Super Mario sets to the Online LEGO Shop that will be available from January 1st. Below are the details.

#71413 LEGO SUPER MARIO CHARACTER PACKS – SERIES 6 – Make the LEGO Super Mario levels you build even more fun with eight collectible Character Packs. Each Series 6 pack contains a buildable character with an Action Tag. Maybe it’s a Blooper with 3 cute baby Bloopers, a Green Toad on a tropical beach, or an Ice Bro. Perhaps it’s Birdo, a Bramball, a Sumo Bro, Spike or a pair of Cat Goombas. Open the pack and find out! Price: $5.99 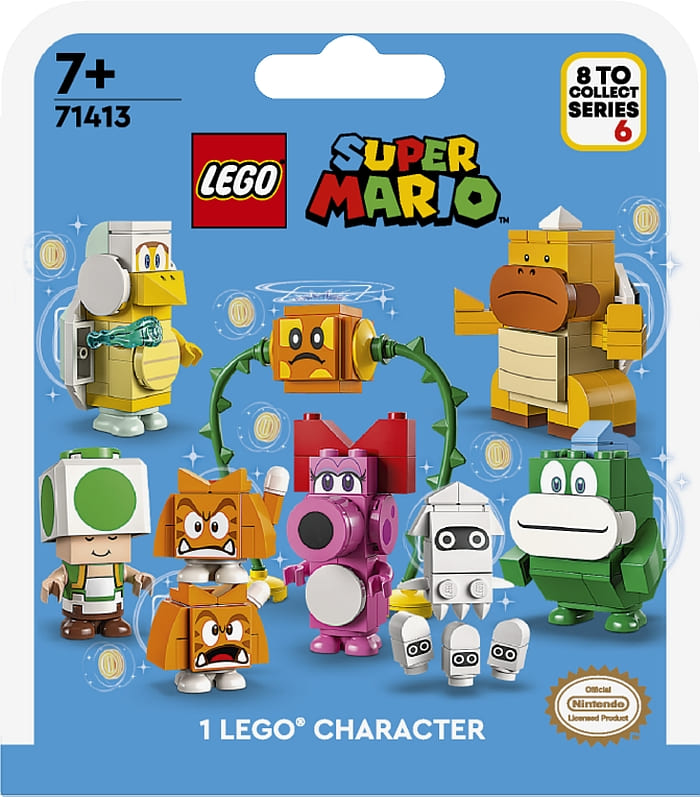 #71414 LEGO SUPER MARIO CONKDOR’S NOGGIN BOPPER EXPANSION SET – Can you conquer the Conkdor? Jump on the trigger in front of this huge character with its long neck, big beak and cool glasses. But watch out – as soon as you land on the trigger, the Conkdor will try to bop you. Defeat it by stomping on its head, then leap on the springboard to make it rise again! Price: $14.99 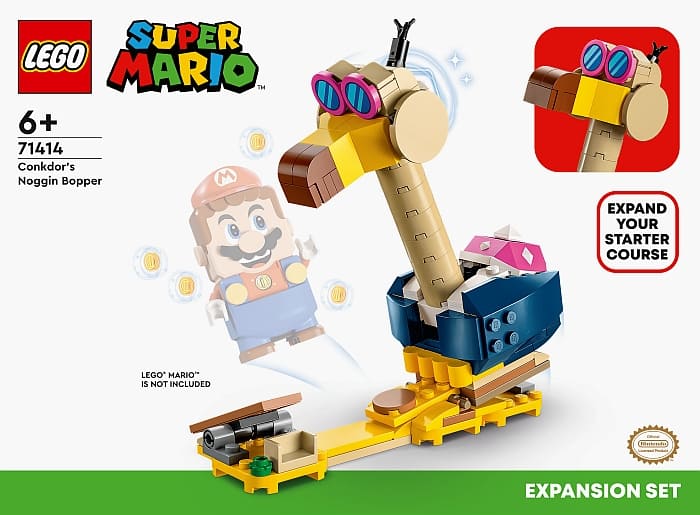 #71415 LEGO SUPER MARIO ICE MARIO SUIT AND FROZEN WORLD EXPANSION SET – Put on the Ice Mario suit to power up for action in the frozen world! Skate on the ice and throw ice balls at enemies. Launch the Cooligan into the ice block to smash it and reveal the Goomba. Defeat both enemies to collect your coin rewards! Price: $24.99 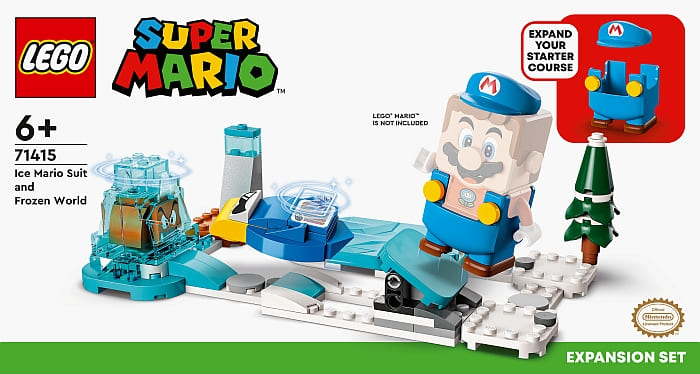 #71416 LEGO SUPER MARIO LAVA WAVE RIDE EXPANSION SET – Get ready to ride the lava wave! Jump on the Lava Lift and keep on rocking on the red-hot wave. Just be careful not to fall off into the flames below. And watch out for the Fire Bro in the nearby tower! Knock the Lava Bubbles off the crests of the wave and defeat them and the Fire Bro to collect more coins! Price: $34.99 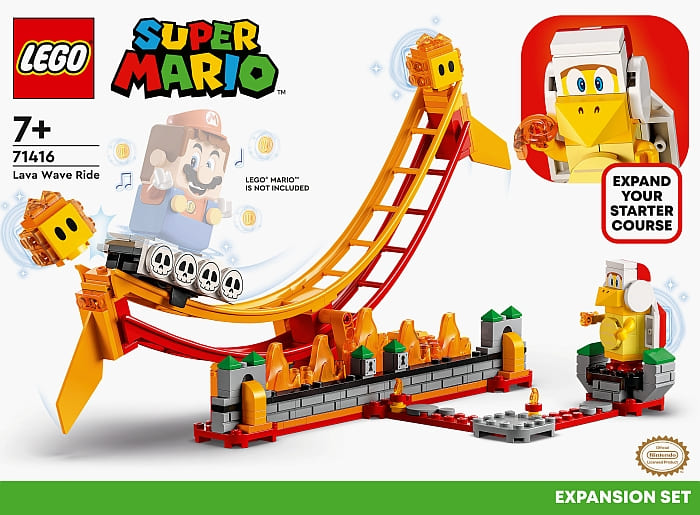 #71417 LEGO SUPER MARIO FLIPRUS SNOW ADVENTURE EXPANSION SET – Get ready for a super cool Fliprus snow adventure! Knock the snowman’s head off to fell the Red Koopa Troopa. Skate on the ice – but be careful not to slide into the water. If you get cold, sit by the fire to warm up! Defeat the Freezie to reach the hidden frozen fruit. Battle the ice-ball-flinging Fliprus, then give the baby penguin the frozen fruit as a gift and hang out for a while! Price: $64.99 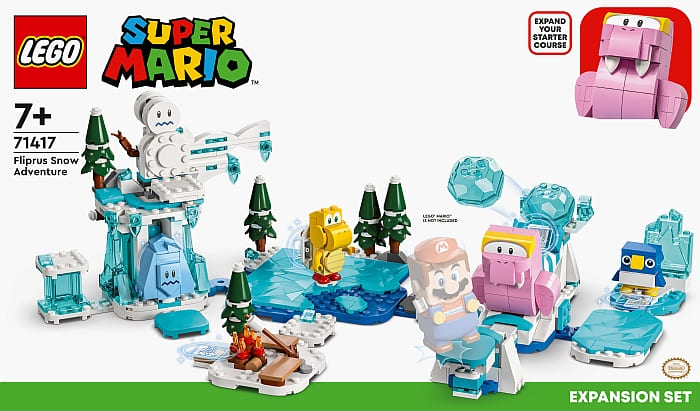 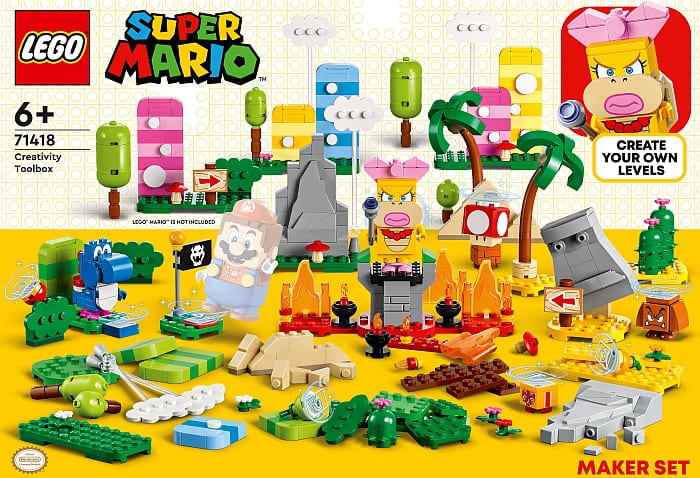 #71419 LEGO SUPER MARIO PEACH’S GARDEN BALLOON RIDE EXPANSION SET – Fly around Peach’s Garden in a hot-air balloon! Discover a Super Star Block in the smoke coming from the chimney of the Blue Toad’s house. Knock the top off the fountain to reveal a Coin Block. Part the clouds over Pom Pom and topple her. Hop out of the balloon, throw the turnip and claim all your coin rewards. Oh – and look inside the balloon for a hot little surprise! Price: $49.99 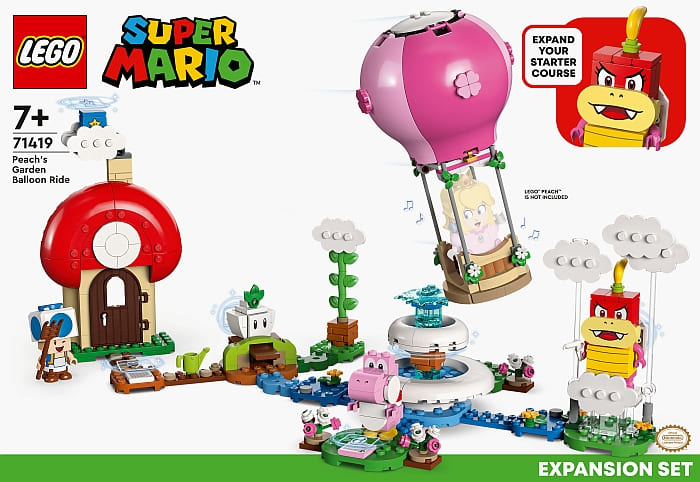