Today I would like to introduce you to a LEGO CUUSOO project that may not be as flashy and exciting as a new LEGO theme, but it is certainly very practical and worth supporting; Themed LEGO Brick Boxes. 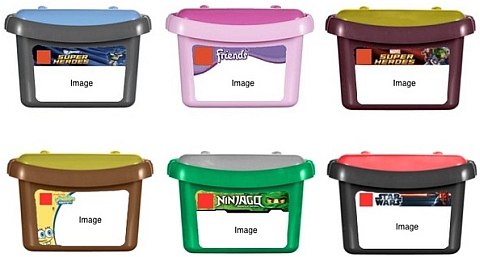 Chris Ciafardini (aka Odd.Robot), the creator of this CUUSOO project, contacted me recently to let me know about his idea and share it with our readers. Once I checked out the project I saw that Chris was up to a worthy cause. Here is what Chris says about the Themed LEGO Brick Boxes:

Themed LEGO Brick Boxes would work the same way as the generic LEGO boxes and tubs that currently exist. The difference would lie in the LEGO theme-specific pieces found within, including colored bricks that fits with a particular LEGO theme or series.

This concept utilizes the licenses and in-house themes LEGO currently have and only repurpose the LEGO pieces and containers the LEGO Company already produces; each new LEGO theme or series can have its own generic LEGO box to provide more pieces and options.

This isn’t a brand new concept or a plea to begin a new LEGO series based on a favorite video game, movie, or cartoon franchise. This is however a solution to an issue myself and others have come across while purchasing and playing with LEGO products.

The many different models that span across the wide range of LEGO themes are beautiful works of design that help people learn new LEGO building skills and grow their imaginations. A lot of times children and adults alike will buy sets with the intentions of building the intended model and then taking it down for the pieces. I began discussing this issue with parents I know and work with. Many of them tell me that their children receive various amounts of LEGO sets for holidays and birthdays, building them once and then having to take them apart to use the LEGO pieces for other projects. I promote this behavior, however…

As the LEGO sets become more and more astounding, I myself have found it difficult to break down the model into it’s many components. Take the LEGO Star Wars Millennium Falcon for example; I loved building it and I love having it on display in my home. I would however like to build my own models with the pieces that are contained within the set, and cannot go and spend the full amount of money again for the set just for the pieces.

This is where the idea of Themed LEGO Brick Boxes comes from. I am not suggesting all the pieces from this set are dropped into a box and sold at a lower price. I am however suggesting pieces commonly found within the different series such as LEGO Star Wars, LEGO Alien Conquest, LEGO Pharaoh’s Quest, etc. to be sold in boxes that allow LEGO enthusiasts to build their own models using the themed LEGO pieces found across the series.

This product is not meant to compete with existing LEGO sets; the Themed LEGO Brick Boxes will act as a complimentary product to current LEGO themes.

Chris also lists the possible pros and cons of the Themed LEGO Brick Boxes that he could foresee:

What is new however is producing a LEGO brick box for every major LEGO theme. Imagine a box of gray, black and translucent elements for LEGO Star Wars fans to build bigger and better space-ships, lots of lime parts to make extra snake-vehicles for LEGO Ninjago fans, or additional castle-wall building-bricks for LEGO Lord of the Rings fans! 😛

If you like this CUUSOO project, please vote for it: VOTE FOR THE LEGO THEMED LEGO BOXES. Remember; it takes 10,000 votes for a CUUSOO project to be considered by LEGO for production, so this project still has a long way to go and needs your support. (You can also Share it, Tweet it and Like it.) Chris would also appreciate any comments and feedback on his idea and for improving the project. Let him know what you think in the comment section below. 🙂